Waning daylight and depleted energy levels conspired against making outfit photos after work in October's penultimate week. Other than that, I've been enjoying these cozy lamp-lit evenings. I've even managed to finish the tedious Elizabeth Gilbert book and start another, altogether lighter and more enjoyable one.

With the mercury yoyoing between 16 and 19°C, which is way above the average temperature for this time of year, there wasn't much to complain about. The weather gods, in a good mood for once, even treated us to a gorgeously sunny day on Wednesday.

Then Thursday came along, bringing stormy weather in the form of tempestuous Aurore. Our umbrellas had a tough job against the torrential rain we'd woken up to and which had only slightly abated by the time we had to leave for work. Drifts of leaves had been swept up and tossed into soggy piles and puddles had turned into minor ponds overnight. 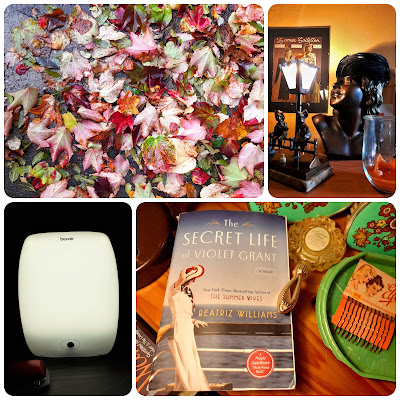 Daylight was a long time coming that morning and when it finally did, the day revealed by my office's 5th floor windows was of the murky kind made worse by a light but persistent drizzle.
Not needing a crystal ball or a science degree to predict months of gloom ahead, I ventured outside during lunch break and bought myself a daylight therapy lamp for the office. We have one at home as well, which I confess I'm rarely using, as I'm usually not staying in the same place for long enough on my days off! 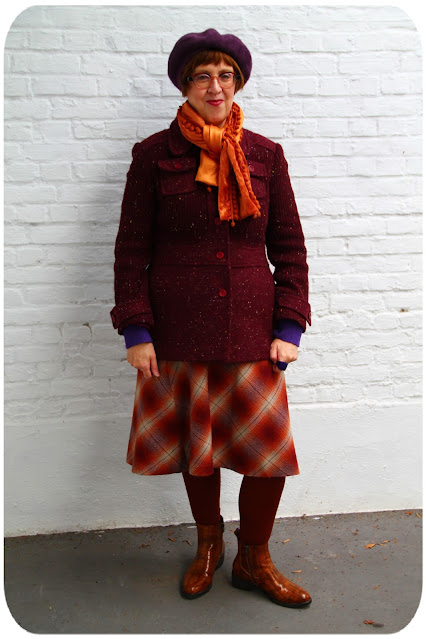 A mixture of sunny spells and showers was on the menu on Friday the 22nd of October.
The temperature had taken a nosedive to 12° which, even though I layered up for our weekly charity shopping trip, was still a shock to the system when we stepped outside.
My burgundy jacket, in a wool and polyacryl blend, is vintage and cost me all of € 6 in a charity shop about two years ago. It has got multi-coloured specks running through the fabric and an unusual knitted  yoke and sleeves. See here for a close-up! I was wearing the same crushed velvet scarf as I did in my previous post, but exchanged the orange beret for a purple mohair one. 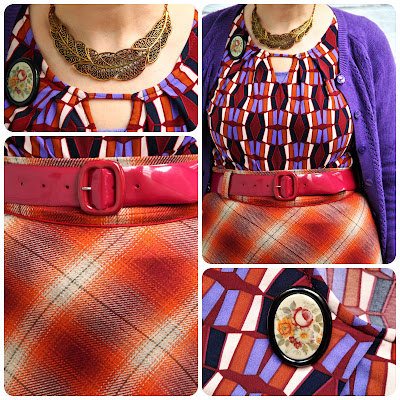 The plaid skirt in delicious shades of rust, burgundy, purple and cream is H&M by way of a charity shop, and has been making regular appearances on the blog ever since I snapped it up in October 2017.
The funky patterned top - also originally from the high street - was a recent find and picked up the skirt's colours perfectly. Apart from the brooch, which was flea market find, my everything else was charity shopped as well, including the filigree leaf necklace, which I found new on card, and the purple cardigan, which came home with me on the same day as the skirt. 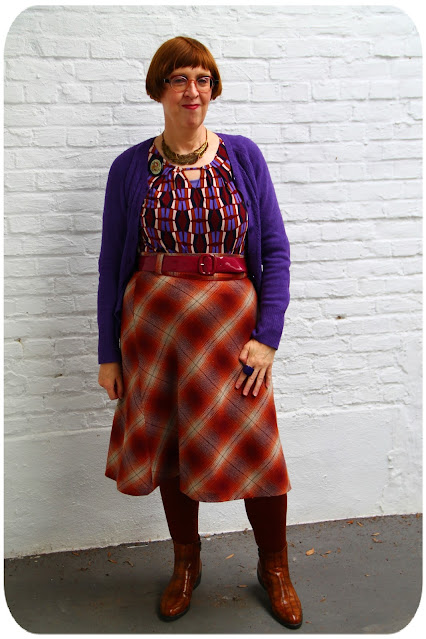 In fact, the only retail items in my outfit are my opaques and the ankle boots I fell in love with on the spot in C&A the other week.
As usual, we selected two shops for our weekly rummage, our first stop being at Oxfam in Wilrijk.
I was hoping to repeat the success of my previous visit here, when I found all things green including a vintage deadstock raincoat. My heart already skipped a beat when I spotted a pair of pristine chocolate brown Gabor boots in the window. Alas, they were too narrow and only zipped up half-way. 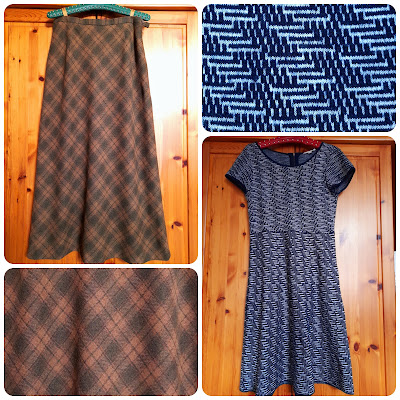 The clothing aisles were a bit disappointing this time, but then I spied this glorious tan and green plaid maxi skirt. It's 100% wool and lined, and from the Dutch Tramontana label, which I admit I've never heard of before.
I also found another stretchy belt for my collection, which you'll get to see later in this post.
Our second stop was at our local charity shop, which is on the outskirts of our town. Here, we made several purchases. These included two dresses, the first one being the blue and white short-sleeved knit dress from Esprit pictured in the above collage. 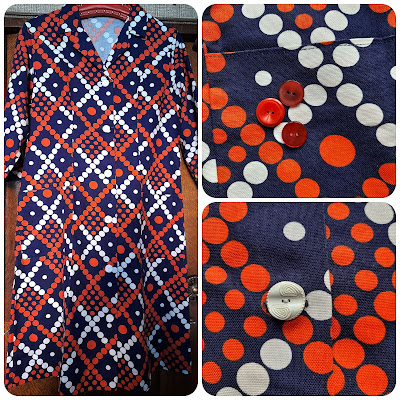 I fell hard for the groovilicious pattern of this vintage dress in navy blue with orange and white dots and neither its mismatched buttons nor the fact that it was slightly too large could dissuade me from buying it. In the end, it was just a matter of replacing the buttons and moving them a centimeter or so to the left. I also nipped in the half-belt at the back with a strategically placed matching button. Et voilà. 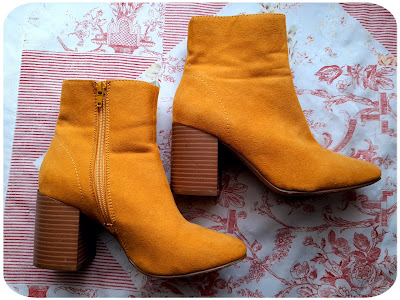 As if to make up for the non-fitting chocolate brown boots, these yellow suede ankle boots crossed my path instead. No-brainer! 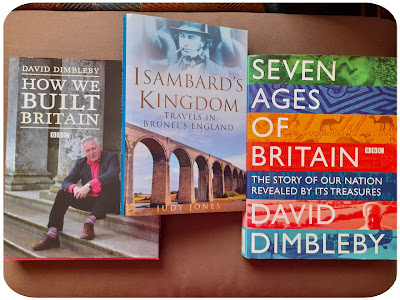 The book department came up trumps too with these hardback additions to our Britain related library. 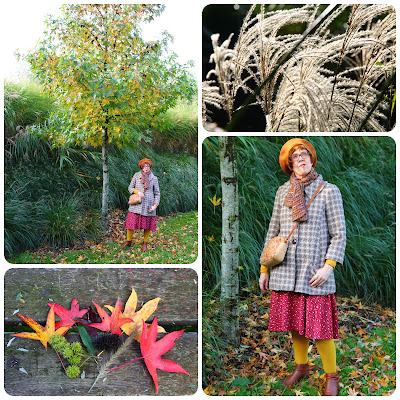 The temperature was hovering in the region of 14°C on Saturday, and as it was a bright and sunny day, Autumn was wearing her true colours again. I decided to join in with my outfit, whose main components came in shades of red, yellow and brown.
The day just called for an outing so, after lunch, we set off in the direction of the Art Deco water tower in the next village. Frolicking in the adjacent picnic garden, I assembled an Autumnal tableau of leaves and seed-heads, which I laid out on one of the tables. 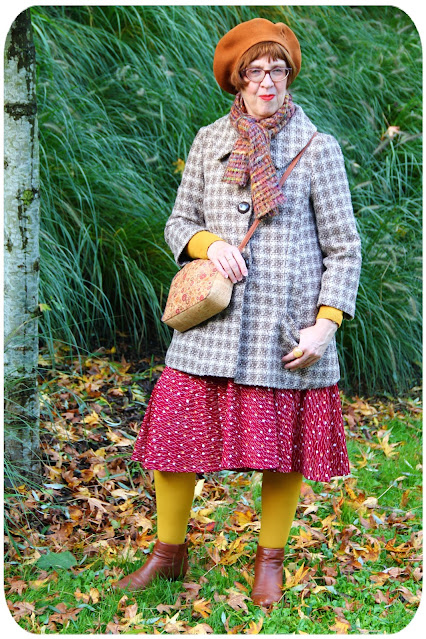 My short swing coat, which isn't vintage but modern, from the Spanish Sfera label, was charity shopped in January 2018, and is just the perfect weight for this time of year. Both my beret and scarf are among my most worn Autumn/Winter accessories and have made it to the blog countless times over the years. 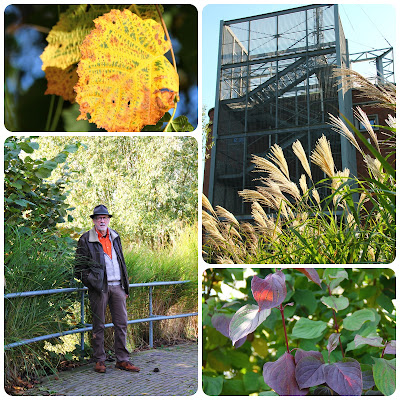 After a short walk around the site's perimeter, we decided to climb to the water tower's viewing platform once more. If the weather conditions are perfect and clear, one is able to catch a glimpse of the uttermost spheres of the Atomium in Brussels, about 30 kilometers away.
Alas, we were out of luck again ...
In the above collage, top right, you can see the metal structure with its see-through staircase leading up to the top of the brick tower. The structure as well as the viewing platform were added to the tower - which dates from 1938 - in 2012, after the village acquired the site from the water company. 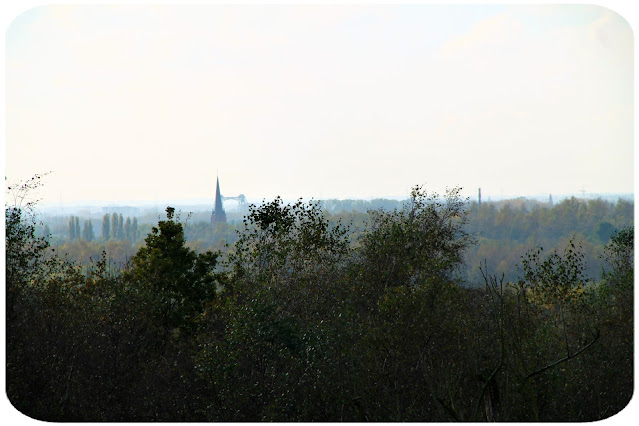 Although the tower itself is merely ten meters in height, it was built on the highest point of the area's clay formation forty meters above sea level, which allowed it to fully function as a water tower.
Now it offers a magnificent view of the area's industrial past, all but one of its clay pits long since redundant and reclaimed by nature. 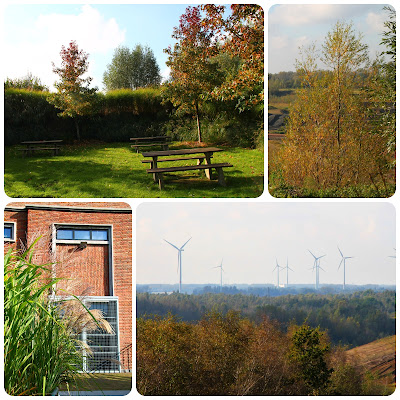 In the sheltered picnic area, it was warm enough to remove my coat and show you what I was wearing underneath.
The dress I'd plucked from my wardrobe that morning was a raspberry one printed with white and yellow dots and dashes and the cutest of buttons. Gracing the rails of Episode, a Dutch chain of vintage shops, I was unable to resist it in January 2019. 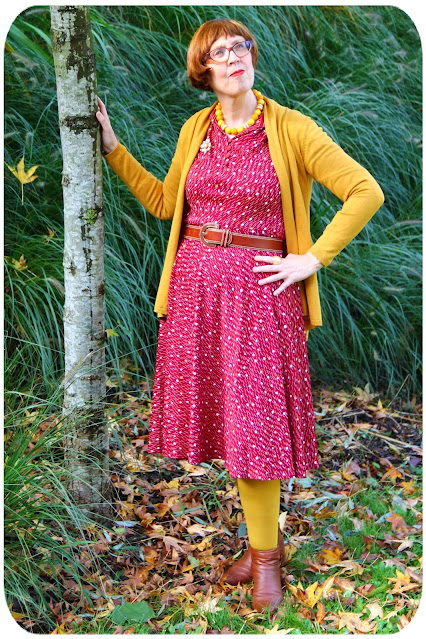 I've never worn it with any other colour than yellow, which I think makes for a match made in heaven.
A pair of yellow opaques, a long-line cardigan and a bubblegum reminiscent necklace were its companions this time around. At my waist, a tan leather belt to tie in with my ankle boots. My brooch, a white, tan and gold flower, was picked up in a charity shop in the water tower's village last year. 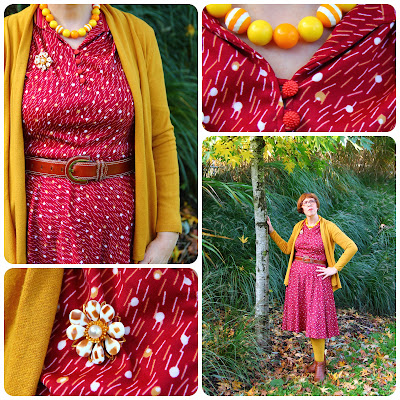 Speaking of which, now that we were in the village, it would have been downright silly not to go for a rummage in that particular shop, wouldn't it? 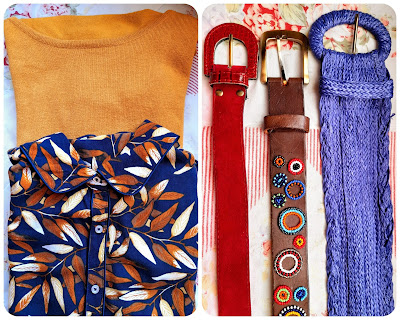 It's one of the smaller charity shops of the area, and its stock can be very hit or miss.
We were in luck this time, as not only did we find two shirts for Jos - which unfortunately  I forgot to take pictures of - a yellow jumper, cobalt blue Autumn leave blouse and two belts came home with us as well. On the far right is the stretchy belt from Oxfam I mentioned earlier.
On that note, we have come to the end of this post. I'll be back with more Autumn splendour in my next one. In the meantime, as it seems infections are rife again, please do stay safe, my friends!

Posted by Polyester Princess at 19:09