My ever changing moods

The problem with my blog lagging a step or two behind life isn't recalling the things I've done with my time or the clothes I've been wearing. With the aide-mémoire of my journal, my photographs generally speak for themselves. No, the real catch is recapturing the exact mood I was in. As I've been feeling a bit maudlin these last couple of days, my current mood tends to bathe the days I am writing about here in a shade of blue, which couldn't have been further from the truth. 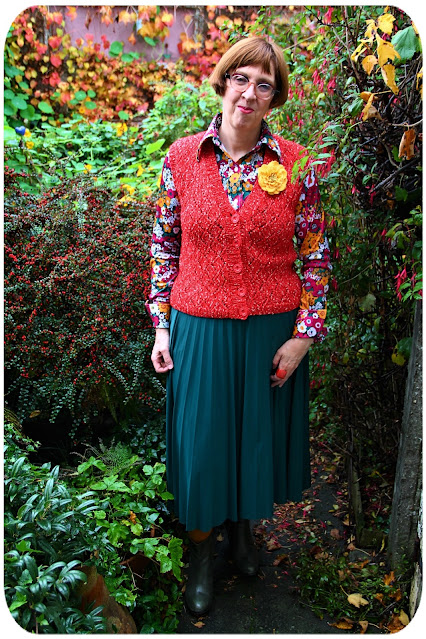 Nevertheless, Saturday the 30th of October couldn't have been more dismal if it had tried. Its temperature, a reasonable 15°C, wasn't too bad, but unfortunately came accompanied by non-stop rain. This prevented us from leaving the house except for taking some obligatory outfit photos when the rainclouds were finally catching their breaths.
I'd been eyeing this forest green pleated skirt - last year's cheeky fast fashion buy - for a while, and decided this stay-at-home day would be the perfect occasion for its first wearing of the season. A quick glance at my shelf of blouses instantly picked out this vintage floral one as its companion. 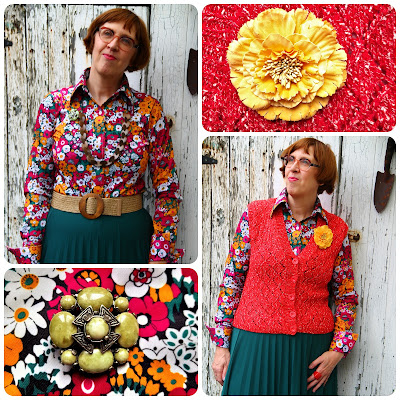 This turned out not to be very inspired as, scrolling through my Instagram squares later that week, I came across the same combo, worn in October 2020. At least, and much to my relief, I accessorized it completely differently back then!
The red and white marled sleeveless knit vest is vintage too, but hasn't made it to the blog in a long time. To the vest, I pinned a yellow flower corsage, while the brooch worn on my blouse was a pale green Miracle one, picked up at our favourite indoor flea market about three years ago. 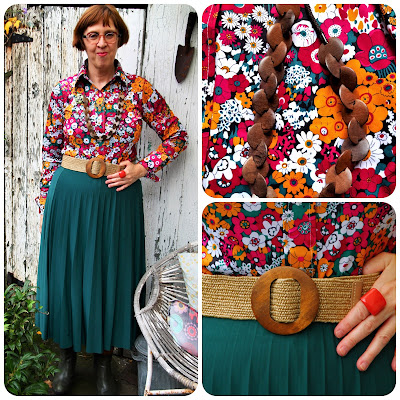 My necklace made of linked wooden discs was a recent charity shop find, while both the belt with its wooden buckle and my red perspex ring were bought on the high street over time.
Speaking of the latter, I'm afraid I've got a confession to make. After spotting them in an advertising leaflet which fell through our letter box earlier that week, I couldn't resist checking out these boots in our local branch of the shop in question after our walk on Friday afternoon. 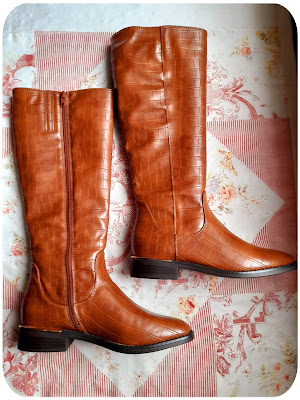 Buoyed up by Friday's ramble in the nature reserve, we took advantage of the energy boost by giving the sitting room and hallway a long overdue thorough clean on Saturday.
We even rearranged some of the ornaments in the sitting room, so that the so-called "Gossiping Marys" which you can admire on the bottom right now have a shelf all to themselves.
The plaster Mary on the right was the one who kick-started our modest collection after we came across her in a charity shop eons ago. The glazed plaster Mary with baby Jesus to her left was charity shopped while on holiday in Poperinge. 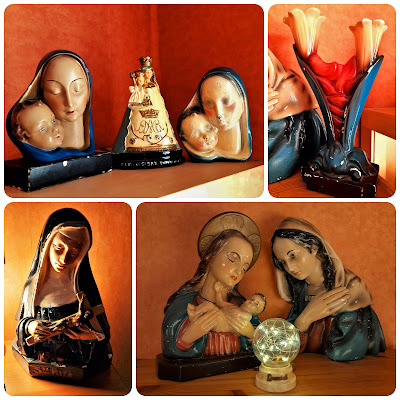 Shortly after finding Mary no. 1, we found a pair of matching candlesticks (top right) for € 3 each. We initially left them behind, but retraced our steps after coming across a similar but considerably more damaged pair in a consignment shop for € 18.
The Mary and baby Jesus ornaments on the top left were picked up in April 2016 and January 2018 respectively, while the smaller ornament they are flanking, depicting Our Lady of St. Jan, Poperinge, was a lucky find during last September's holiday.
On the bottom left is St. Rita, to whom one of our local churches is dedicated. Patron saint for impossible causes, getting rid of Covid-19 nevertheless seems to be quite beyond her! 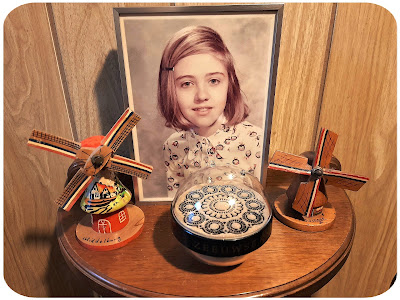 The girl in the above picture might look saintly, but she certainly isn't. Or perhaps she still was at the time? It's me at age 12 going on 13. Such an innocent age, in particular in hindsight. The photo graced the parental living room walls ever since it was taken by a school photographer in the Spring of 1974. 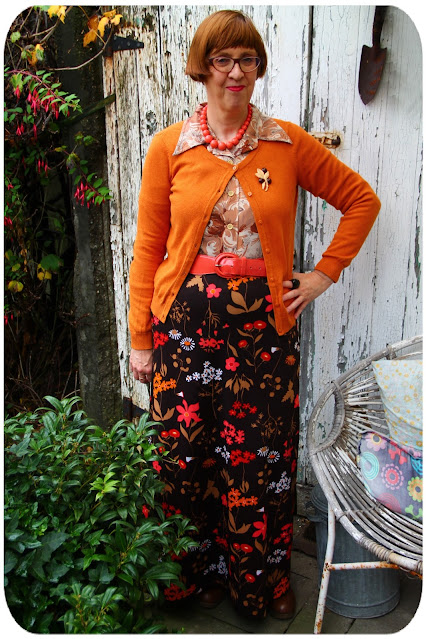 Fast forward 47 years and here I am, looking considerably less saintly, on Sunday the 31st of October.
In observance to Hallowe'en, I was wearing a pumpkin coloured cardigan. No, scrap that. For fear of offending some aficionados, I am not very much into Hallowe'en at all, particularly since it has never been a tradition here in Belgium.
I picked this outfit for warmth as much as for its looks, as we would be going out in the afternoon. But more about that later. 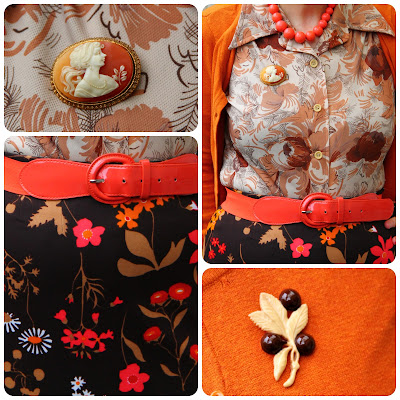 My chocolate brown floral maxi skirt is Crimplene and comes with a satisfyingly swishy lining. It was an old Think Twice bargain, as was the Diolen blouse in shades of cream and brown by the Finnish Karelia label.
I added an orange necklace and half-elasticated belt, while again I took the opportunity of wearing two brooches: a Cameo on the blouse and a cream and brown celluloid sprig of leaves and berries on the cardigan. 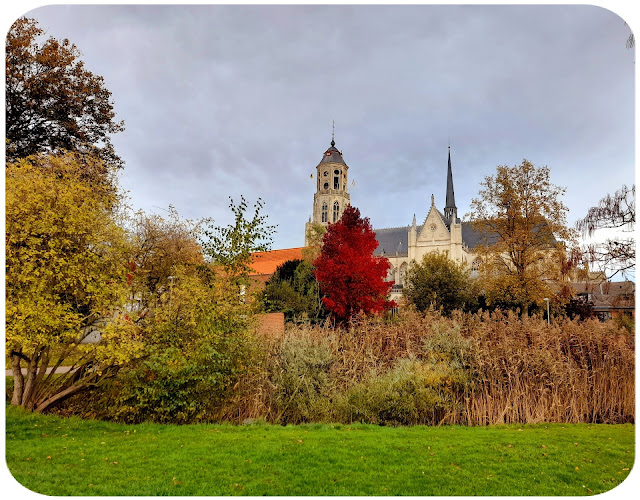 We were off to Lier, a small but charming town about half an hour's drive from Dove Cottage. Rather than sightseeing, the purpose of our visit was a musical concert organized and performed by Jos's granddaughter Saar and four of her girlfriends.
As usual, we'd set off well on time in case we would have problems finding a parking spot, as people often flock to the town on a Sunday. As luck would have it, there was plenty of space near the venue, leaving us with a bit of time to spare. The town's main church, St. Gummarus, and in particular its tower, which is nicknamed "de peperbus" (transl. the pepper pot) is visible from afar, and was looking suitably picturesque against the granite grey of the sky and the tree clad in Autumnal fiery red. 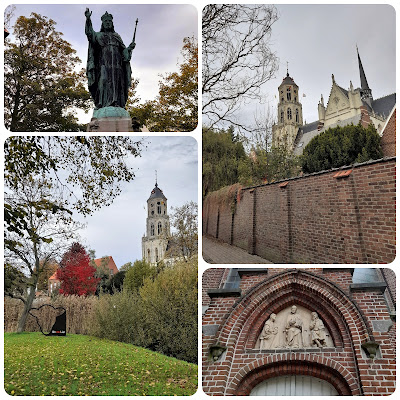 Although the venue, a chapel dating from 1882, and seating about 50, had already opened its doors, we preferred to postpone the moment we'd have to put on our face masks by going for a walk until it was almost time for the performance to start. After all, our seats - on the first row, no less - had been reserved.
Being in such a prime position allowed Jos to take a couple of photographs. Jos's granddaughter is the the girl in red! Not only does she have a fantastic singing voice, she plays keyboards as well. Needless to say, we were both duly proud of her talent. 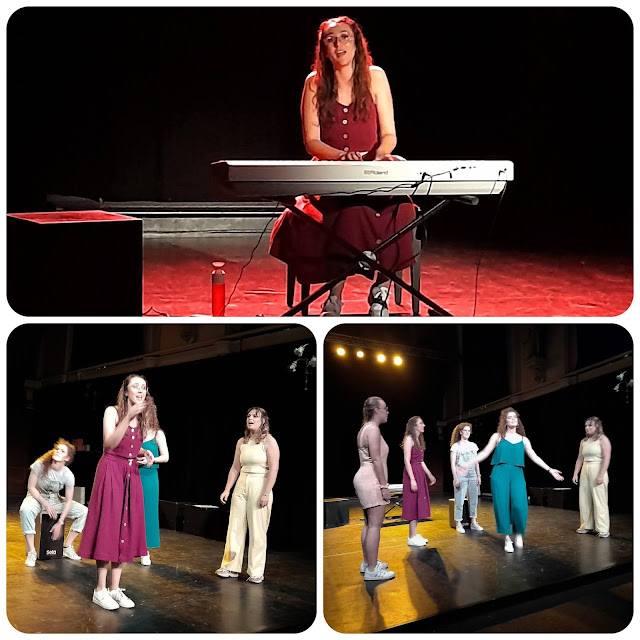 The seeds for this concert had been sown during lockdown last year, when the girls, who were communicating via Skype, had been lamenting the fact that they couldn't pursue their musical hobby and decided to start an - initially online - project instead.  As during their Skyping sessions they were all knitting various garments, the name of the project was soon decided upon: Knits and Notes!
It was raining by the time we left the venue two hours later and, as we'd put back the clocks the night before, what was left of the daylight soon made way for the gloaming on our way home. The abrupt change always leaves me feeling slightly jet-lagged, so that I was glad of the extra day tagged on to the weekend. Monday the 1st of November - All Saints' Day - is a public holiday here in Belgium! 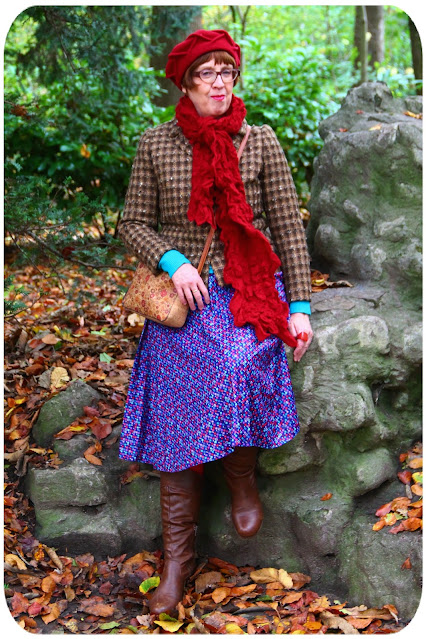 Typically, this is the day people visit the cemetery and commemorate their departed loved ones by decorating their graves with flowers. However, as we neither have any graves to visit nor need a special day to remember our loved ones, we had the day to ourselves.

We'd woken up to a mixture of sunshine and clouds, and with the temperature having dropped to 12°C and made even more unpleasant by quite a bit of wind, we initially settled on a day of pottering.

My journal tells me I hand washed a batch of face mask and then finished my wardrobe changeover. 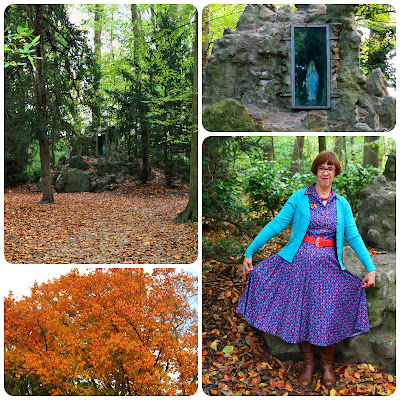 When after lunch the sun graced us with another one of her appearances, we decided on a short stroll to clear our heads. Our destination, Altena park, was reached after a mere 10-minute walk, dawdling and photographing Autumn foliage included.

I posed for photos with the park's kitschy Lourdes grotto as a backdrop.

My dress with its wide pleated skirt and pattern of tiny red, pink, turquoise, blue and lilac squares is an old favourite. Taking the lead from its red squares and buttons, I added a red belt and beaded necklace, as well as a gold-tone brooch with a mottled red heart. I was wearing red opaques as well, but you'll have to trust me on that one as they're not visible in the photos! 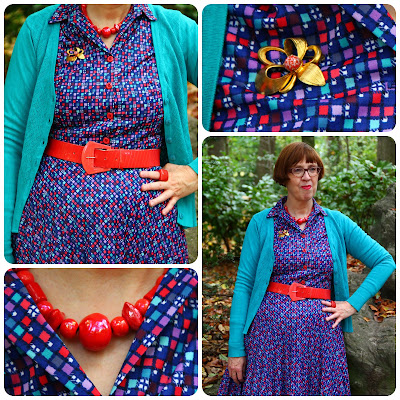 A turquoise cardigan went on top, while the outer layer of my outfit consisted of a brown tweed jacket which is part of a suit I happened upon during that morning's changeover.

More red was added with my scarf and beret. 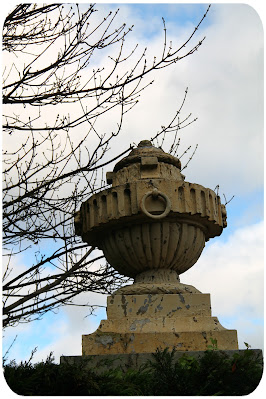 We crunched through the thick layer of leaves looking for chestnuts. Finding only browned and empty husks, we decided that their season must be well and truly over.

Then, as the sun had taken absence of leave once more, leaving only patches of wintry blue sky among the darkening clouds, we made our way back home.

I do hope to see you again in a couple of days. In the meantime, with the virus on the loose again, please do stay safe, my friends.

Posted by Polyester Princess at 18:48