A feast of fungi

What with Monday the 1st of November being a bank holiday, the first working week of November was a mercifully short one.

In those three days separating us from the next weekend, the weather gods lived up to their reputation for fickleness by alternating rainy days with sunny ones, throwing in a veil of morning fog and a light touch of overnight frost for good measure. In fact, the only constant was the temperature, reaching highs of a mere 10°C. 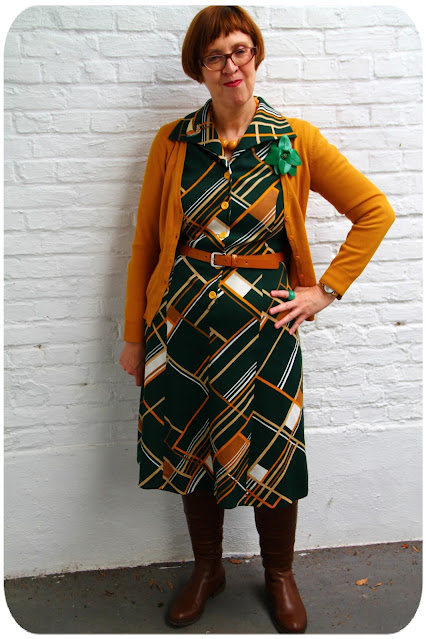 A mixture of sunny spells and clouds awaited us on Friday, the mercury making a slight ascent to 12°C as if in celebration of the fact that we'd once again managed to make it through the week unscathed.
As we'd given the charity shops a miss in favour of a walk the week before, it goes without saying that we were now champing at the bit to have a bit of a rummage.
But first things first: let's have a look at my outfit before we go!
This dark green Diolen dress with its yellow, tan and white rectangles and diagonals is one of my absolute favourites. Happening upon it in a charity shop in January 2017, it instantly ticked all my boxes, except for the rather uninspired buttons. This obviously wasn't an issue and they were easily replaced with yellow vintage ones from my stock. 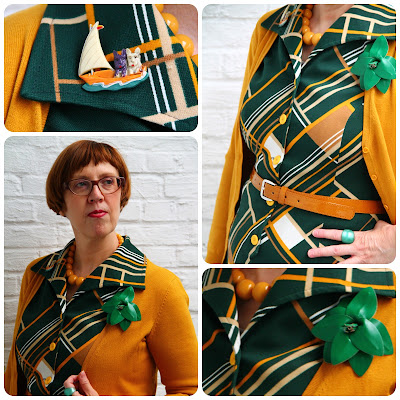 If I were to do a Sheila-style flashback on the dress, it would turn out to be rather boring, as I don't think I've ever worn it with anything but a yellow cardigan and ditto opaques. There would only be a subtle difference in my choice of accessories. This time, they included a tan shiny vinyl belt, a yellow beaded necklace and a green perspex ring.
The brooch I pinned to my dress's collar is a vintage celluloid one, in which a twosome of black and white Scotties are having an adventure in a sailing boat. The green faux-leather flower I treated my cardigan to is actually a hair clip! 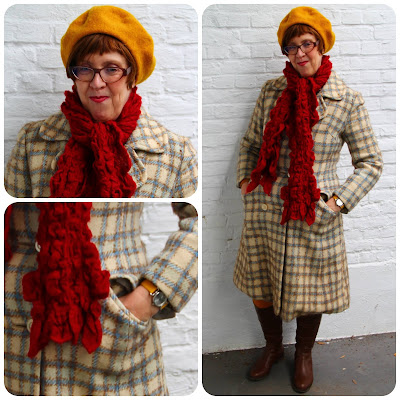 My boots are a leg-hugging pair of chocolate brown ones which are the epitome of comfort.
The cream woollen coat with its blue and tan plaid pattern is about to fall apart at the seams but will be worn as long as it doesn't actually do so. At a rough guess, it was charity shopped about 10 years ago, and I love it dearly. Both my yellow beret and red frilly scarves were thrifted as well.
Now, what about that charity shopping trip? I think a word of explanation is in order here. The vast majority of Belgium's charity shops are large warehouse type shops situated on the edge of towns rather than in their high streets. We usually visit two of them on a given day, choosing different ones every week. 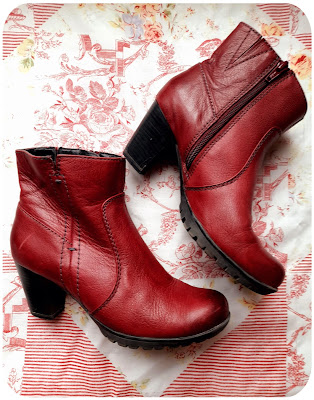 That Friday it was the turn of the shops on the outskirts of the towns of Morstel and Lier.
They are both part of the same chain, called Opnieuw & Co., which loosely translates to Re-use & Co. The first shop, which was the one in Lier, opened its doors in 1995. Today, they have six shops in the area, four of which we visit on a regular basis.
My recent wardrobe changeover had yielded two bags full of donations, which we handed in at our first shop, ensuring rewards from the charity shop goddesses.
Here is what I found, starting with a pristine pair of burgundy ankle boots by the German Jana brand.
They have already been worn successfully in the meantime. 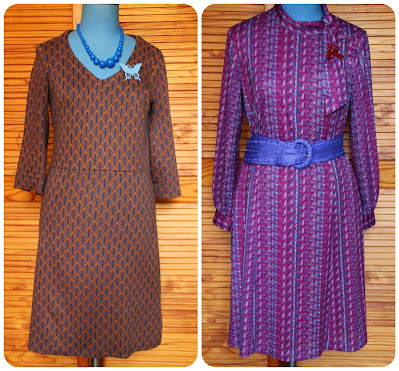 Next up are two dresses. The one on the left is modern, from the Belgian Wow To Go label, while the one on the right is vintage. Both have a funky print and are missing their belts, which I probably wouldn't have used anyway. I love the little side tie on the vintage one! 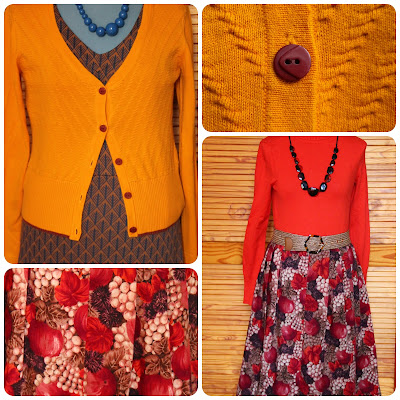 The yellow textured cardigan, which has the most gorgeous brown buttons, is from retro label Zoë Loveborn and I couldn't get over how fabulous it looked when I layered it over the Wow To GO dress for the photos.
Both the floral skirt, orange polo neck and faux-tortoiseshell necklace were found that day as well. Another instant outfit, although I did pick up the polo neck to wear under this dress in Winter. 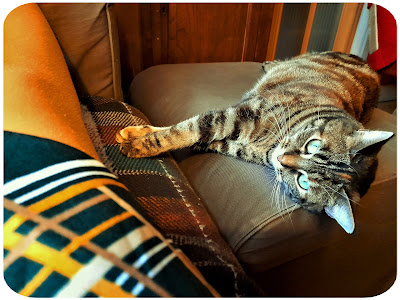 After all this exertion, I needed a lie-down, and was joined by Bess, who has become a model of some fame in the meantime. After I sent the collage of our little rascal making use of her tap-shaped drinking fountain to Katty, the owner of the shop where I bought it, she posted it on her social media the next day! 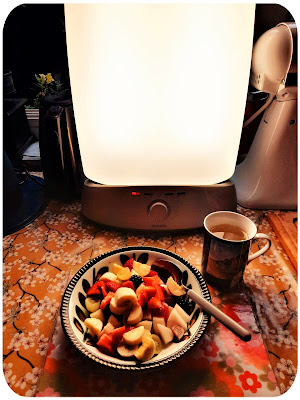 The mercury had dropped to 10°C again on Saturday. As it looked set to be an overall grey and dismal day, we unearthed our daylight therapy lamp, blowing the accumulated dust of its surface, and installing it on our kitchen table. Thus, breakfast was prepared and consumed while basking in its mood-lifting light. 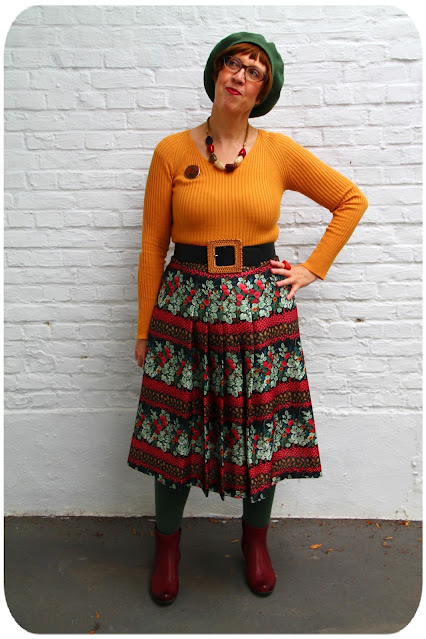 With no rain on the horizon, wild horses couldn't have kept us inside so, after lunch, we decided that a walk in the park was in order.
Before we stepped into out car, we made use of our rented garage's photo studio facility in the form of its white painted brick wall. I was wearing two of Friday's finds, one of which I hadn't shown you yet. It's the wide black belt with its massive wicker belt! Have you ever seen anything like it?
The second of Friday's finds were the ankle boots. These I only wore for our walk to and from the garage, which is about 400 meters from our home. They were exchanged with walking boots to combat the muddy paths in the park! 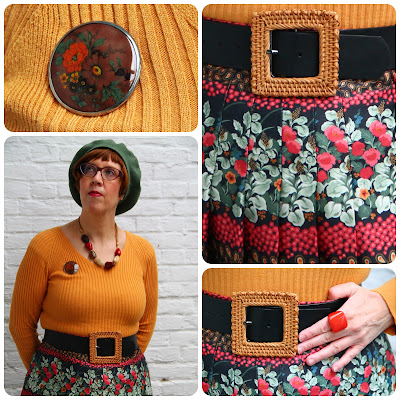 The floral pleated skirt I was wearing was picked up at Think Twice about two years ago, and has already featured on the blog a number of times. Its companions this time were a yellow ribbed V-neck jumper, sage green beret and opaques, chunky beaded necklace in red, brown and cream and a red perspex ring.
The enamelled brooch I pinned to my jumper was a flea market find, while everything else, except for my opaques and ring, were charity shopped. 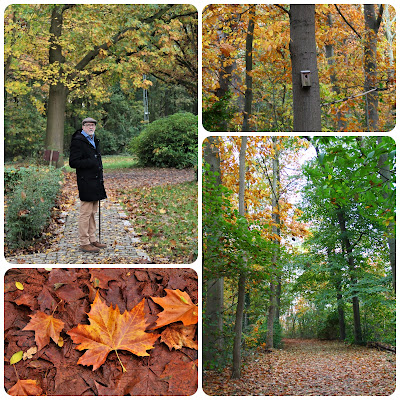 In spite of a ray of afternoon sunshine promised by the weathermen, the dullness of the day still hadn't lifted by the time we reached the park in the town of Boom. For any new time non-Dutch speaking readers, in case you are wondering, the town's name is pronounced as [boːm]!
The earthy, musky-sweet scent of Autumn leaves greeted us once we stepped through the gates and no matter which path we took, they were all covered in a generous layer of them. 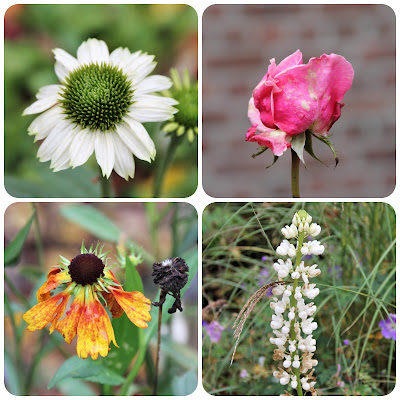 We took the outer path, which passed the building and garden belonging to a centre for environmental education. Here, we admired what was left of the Summer flowers, including white Echinacea, an abundance of roses, the odd Lupine spike and some soggy remains of Helenium 'Moerheim Beauty'. 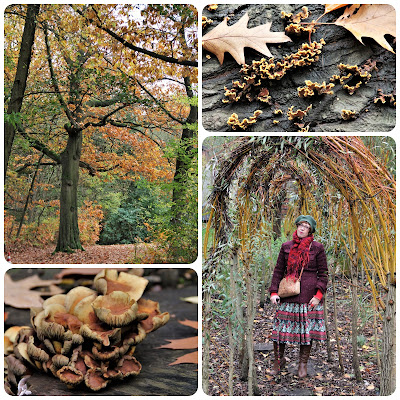 After posing under the remains of a willow walk, we ventured into the heart of the park, collecting some horse chestnuts for Bess to play with, and keeping a look out for any interesting fungi.
By then, the sun was beaming down the faintest of rays from the odd patch of pale blue, illuminating the yellow leaves and sprinkling them with gold dust. 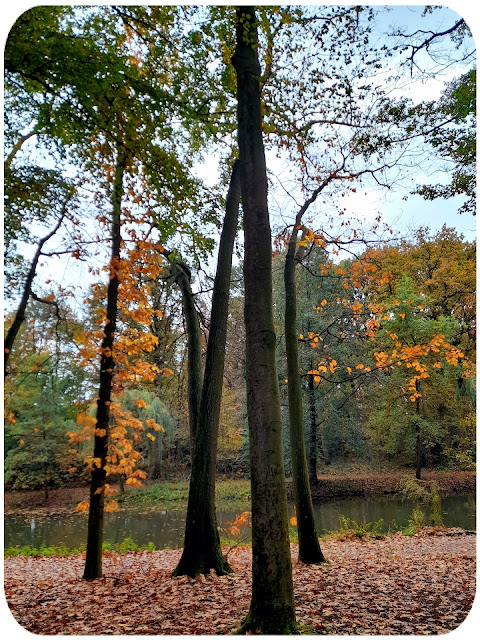 We made a shortcut through the children's play area where various adventure inviting structures were blending in organically, with a gently trickling waterfall adding to the magical atmosphere. 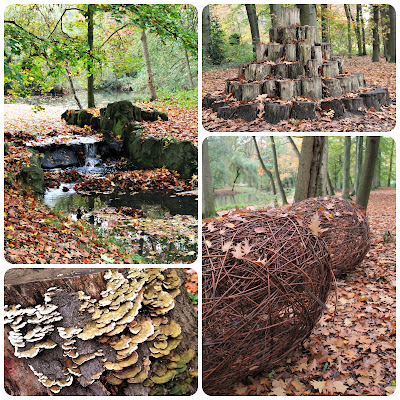 And then we spotted the most magical thing of all.
The well-rotted remains of a once majestic tree trunk turned into a high rise estate for hundreds of hungry fungi!
Oh, the magic of nature really does make my heart sing and is a definite mood enhancer, especially in these continuously trying times. 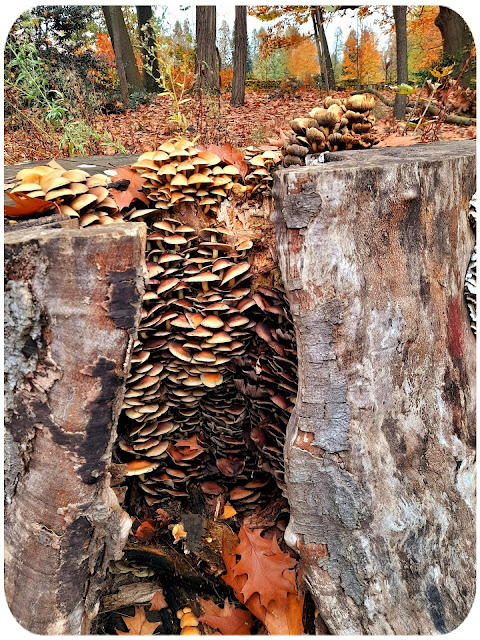 I hope you're all hanging on in there and staying as safe as possible. See you next time!
Posted by Polyester Princess at 18:59