The clock keeps ticking, its hands tirelessly moving through the days.

And I too keep moving through the days, my mind in a whirl of do's and don'ts. With the C word once more playing a starring role in the news, I'm putting on my blindfold and I'm plugging my ears, while sending up prayers to gods unknown and hoping for a miracle. That light at the end of the tunnel which seemed so temptingly close a while ago has been snuffed out for now.

Heaven knows I need all the therapy my wardrobe and nature can give me! 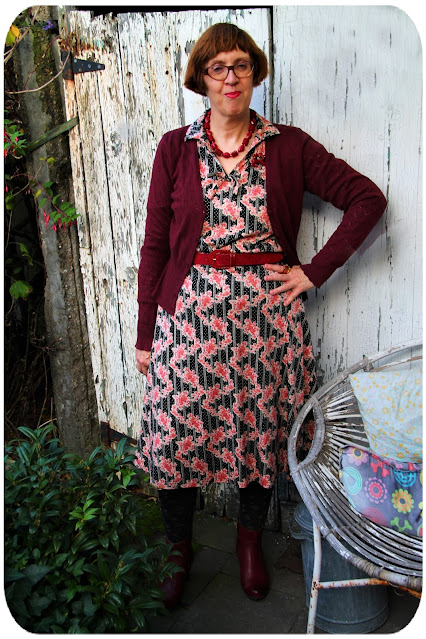 Sorely in need of some cheering up, I riffled through my wardrobe on Sunday the 7th of November and decided that it was time to give this vintage Venetia frock another outing.
Purchased from a long-gone vintage shop about 10 years ago, it was its pattern of tiny white dots and  garlands of frothy pink flowers that won me over.
More flowers were added in the form of my rosebud sprinkled granite grey opaques.
Further accessories, all in a delicious shade of wine red, were a beaded necklace, incidentally picked up from the same shop, a ceramic leaping deer brooch found at a flea market and the belt I charity shopped a couple of weeks ago. 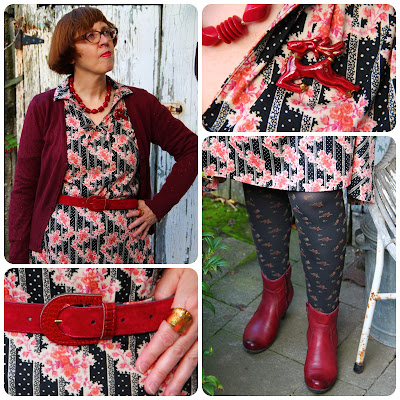 A burgundy King Louie cardigan and my recently found ankle boots, both courtesy of the charity shops, completed my outfit.
I donned the boots for the photos only, as otherwise than that we didn't leave the house at all that day. The vague plans we'd made during breakfast to either go for a short walk or drive down to the garden centre, were both ditched by lunch time. By then, the day's initial sunshine had upped and left and taken my energy as a travelling companion. 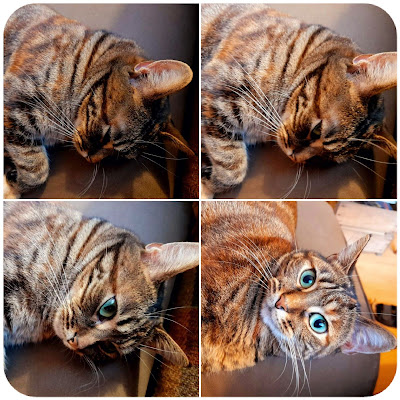 Instead, I caught up with blogland and then joined Bess for a nap on the sofa. Apparently, she'd run out of steam as well. When I posted this collage on Instagram, I captioned it with waking up is hard to do!
Waking up was indeed a hell of a job on Monday morning as, in spite of a good night's sleep, I was still feeling tired and would have happily slept for another couple of hours. As it was, tiredness would plague me for the rest of the day, so it was a good thing work wasn't too busy. 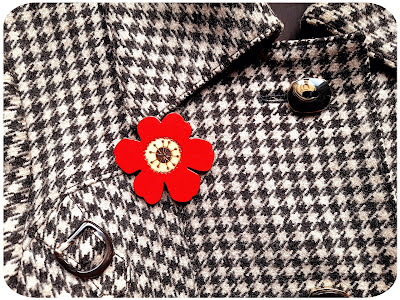 In the run-up to Armistice Day, I'd pinned my wooden poppy brooch to my coat.
Can you believe I hadn't worn this houndstooth patterned vintage coat at all last Winter? To make up for lost time, I've been wearing it almost daily ever since.
I woke up tired again on Tuesday, but this time it were the telltale signs of an impending cold which had kept me awake. Hello itchy throat and runny nose, I haven't run into you in a long time! 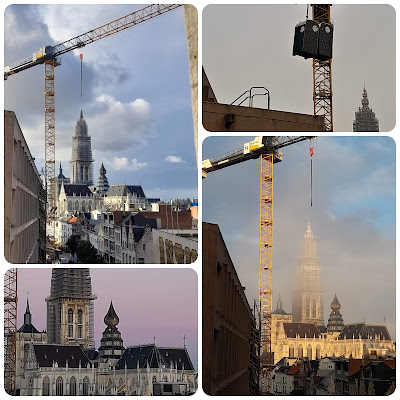 I haven't seen an unblemished view from Antwerp's magnificent cathedral in a long time either.
The view from my office window has elicited many a photograph over the years. However, the cathedral's tower has been partly scaffolded for almost three years now. To add insult to injury, our other pride and joy, Antwerp's Art Deco skyscraper, is currently being renovated and given a new purpose, for which a giant tower crane has been installed.
Although not nearly as picturesque as the cathedral tower partly hidden behind an errant cloud (bottom right), I couldn't resist snapping the two portaloos which were being hauled up in the photo on the top right. 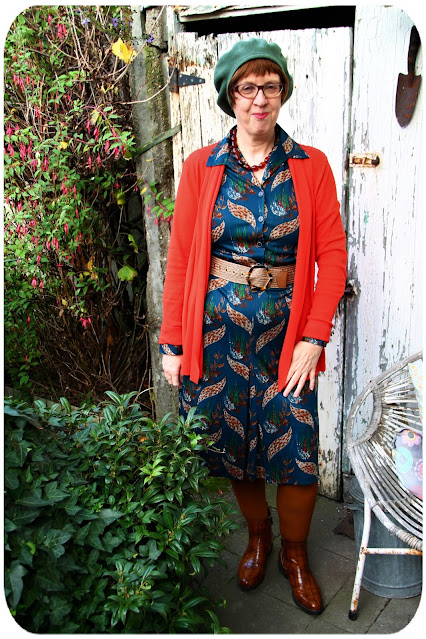 As the 11th of November is a public holiday in Belgium, Wednesday was my final working day of the week. I can't say I was sorry, as I was feeling like a zombie. My sinuses were congested by now - I've got chronic sinus issues at the best of times - which no amount of the usual home remedies would shift.
Things greatly improved during the evening and, after a good night's sleep, I was feeling almost right as rain again on Thursday morning.
To celebrate my return to the living, I wore one of my latest Think Twice purchases, a teal vintage dress patterned in Autumnal hues. 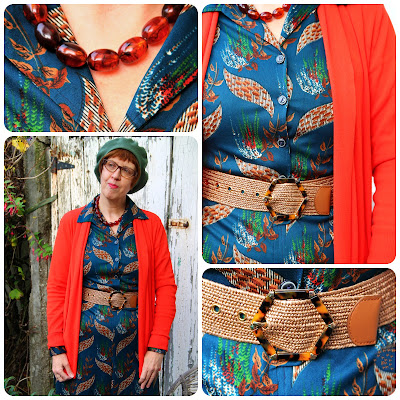 We'd planned a quiet day of reading and perhaps napping on the sofa to help me bounce back, so I opted for comfort by wearing one of my stretchy belts. No athleisure wear for me!
While we were photographing my outfit, Jos pointed out that I wasn't wearing a brooch. I did however, wear a faux tortoiseshell necklace. Orange opaques and a ditto cardigan completed my outfit while for stepping out into the garden, I added a sage green beret and my C&A ankle boots.
The sun, which had been playing hide-and-seek with the clouds all week, had decided to take the day off as well, disappearing completely for the duration of the day. 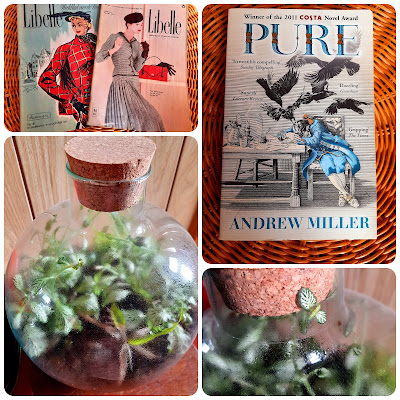 Apart from some light pottering as I can't seem to be still for long, I started a new book. Pure, by Andrew Miller, is set in 1785 in pre-revolution Paris. The novel's protagonist is a young, provincial engineer charged with demolishing the French capital's oldest and by that time seriously overflowing cemetery. I've just finished it and although it mostly lived up to expectations, I felt a bit let down by its final chapter and end.
A bit of light entertainment was provided by browsing some 1950's women's magazines we've got lying around (top left).
Passing the bottle garden which lives on our hallway cabinet, I noticed that one of its plants was trying to make its escape. After more than a year's confinement I can more than sympathize with the poor thing ... Secretly, though, I am more that just a little chuffed that we've managed to keep it alive all this time! 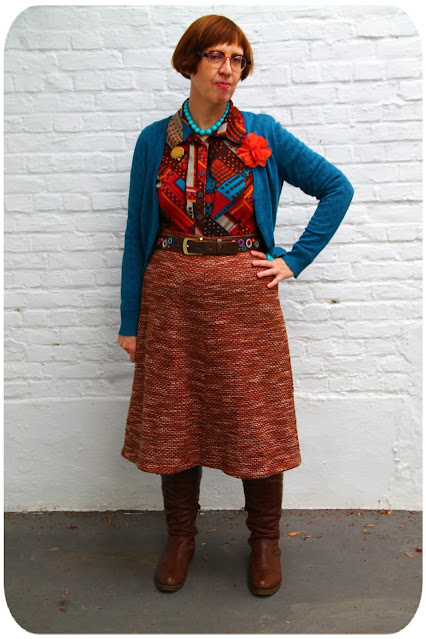 By Friday, I felt more than ready to face the world again. What's more, we were greeted by the sun as soon as we got up.
While Jos was doing a food shop, I washed my hair, and then tackled some of the dust in the downstairs rooms. Nothing like the low slanting sunshine this time of year to show up the accumulated dust!
As the sun still wasn't showing any signs of doing another disappearing act after lunch, we grabbed our coats and went outside for a much needed breath of fresh air.

Apart from the embellished belt I charity shopped a couple of weeks ago, there's nothing in my outfit which hasn't made it to the blog at one time or another.
The rust coloured slubbed skirt is St. Michael and came with a short-sleeved belted jacket. I've had it for absolutely ages. My teal cardigan is another charity shopped King Louie in the same pattern as the one I wore in my first outfit. The blouse with its riotous pattern and frilly button placket was charity shopped too, a lucky find in between lockdowns last year.
In order to ward off the rain, I pinned a vintage umbrella brooch to the blouse, while I clipped an orange flower corsage to my cardigan. Further accessories were a turquoise plastic ring and beaded necklace. 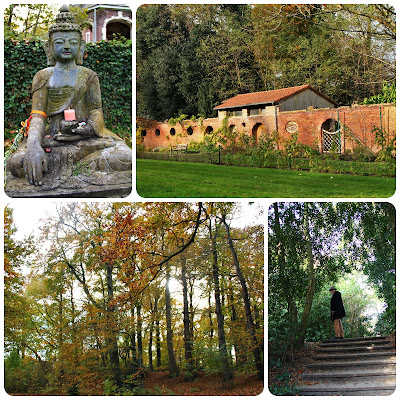 Our afternoon outing took us to yet another park, Den Brandt, one of the pearls in Antwerp's crown of parks.
It is part of a cluster of green spaces south of the city centre. Den Brandt, Nachtegalenpark and Middelheim used to be private estates belonging to aristocratic families until they were purchased by he town council in 1910 and opened to the general public.
After parking our car around the corner, we entered the park via the public picking garden where we checked out the offerings made to the Gautam Buddha, a gift from the Ambassador of Nepal back in 2004. 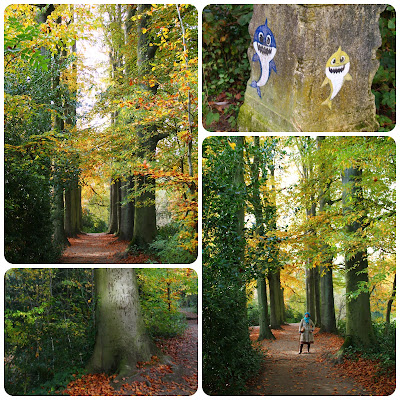 From there, we took the flight of steps leading into the park itself, continuing on the path to the left and passing through an avenue of monumental trees. Look how tiny I am compared to them! Looking up, I did feel a bit like Alice after she'd taken a sip from the Drink Me potion.
The grinning shark graffiti on a defunct stone plinth just beyond the avenue made me smile. 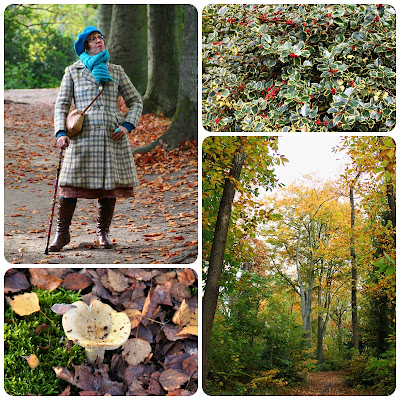 As usual, we skirted the heart of the domain dominated by its romantic late-classical castle and the sweeping undulating lawns at its back, walking leaf-strewn paths under ever thinning canopies, and taking care not to trod on tiny fungi hiding among the carpet beneath our feet. 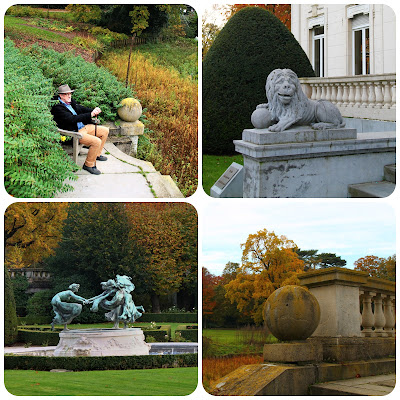 But there's no avoiding the castle forever, so eventually we could see it beckoning between the trees.
Nowadays, the castle is a venue for events and parties, and incorporates a Grand Café, which didn't seem to be open at the time of our visit.
By then, clouds had gathered again, drawing a curtain across the sun.
With a backward glance towards to Dancing Nymphs (bottom left), which have been dancing around the currently empty fountain since 1910, we made our way back to our car and drove back home.
Posted by Polyester Princess at 19:10