As we're heading further into this second pandemic Autumn, I'm trying to keep dark thoughts and a heavy heart at bay. Sometimes, it's like walking a tightrope and it's taking my assembled willpower not to look into the abyss. On days like these, weather permitting, the best thing to do is to go outside and let one's soul be soothed by nature. 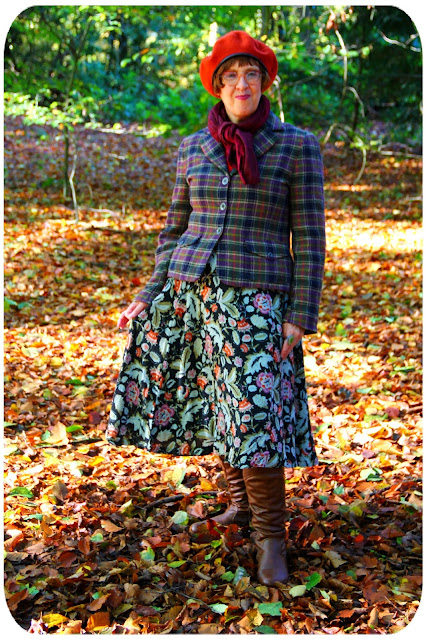 At a balmy 15°C and with brilliant sunshine, the weather definitely permitted on Sunday the 24th of October when, after a morning of catching up on chores, we found ourselves at a bit of a loose end.
As the forecast had once again been indecisive, the weather deities apparently having a hard time to make up their minds, we had left it far too late to make any firm plans for the day. Fortunately, we are blessed with a handful of local parks allowing for spur of the moment, grab-your-coat and go decisions. 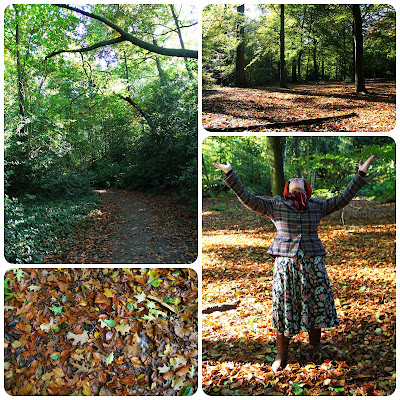 Solhof park, in the neighbouring village of Aartselaar, is the perfect size for an hour's head-clearing stroll.
With scintillating Autumn scents tickling one's nostrils and a carpet of leaves thick enough to indulge in a spot of leaf-kicking, it suddenly felt great to be alive again. 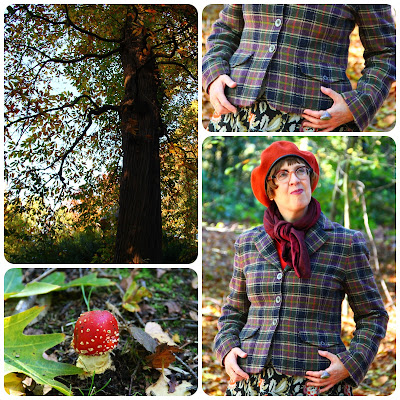 The sun was shadow-playing with the filigree branches and their turning leaves, while - careful, watch your step! - tiny toadstools were hiding among the carpet at our feet.
The jacket I'd grabbed in my haste to flee the house was this multi-hued tartan Gigue one picked up in a charity shop just over a year ago. This was accompanied by my orange beret and one of my crushed velvet scarves, in a luxurious shade of burgundy. 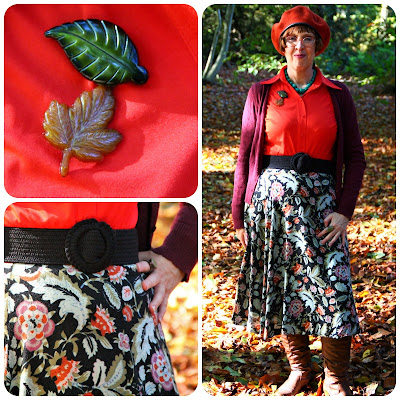 Burgundy appeared again underneath my jacket, in the form of my cardigan, another charity shopped King Louie. This was worn on top of my orange-red 1970s blouse, the colour of which tied in with some of the flowers in the pattern of my flower and foliage scattered skirt. The latter was a recent charity shop find I actually forgot to show you at the time.
To my blouse, I pinned two vintage Autumn leaf brooches, in green and brown. Other accessories included a green beaded necklace, a silvertone ring with a mottled green stone - barely visible in the photos - and a black, round-buckled stretchy belt. 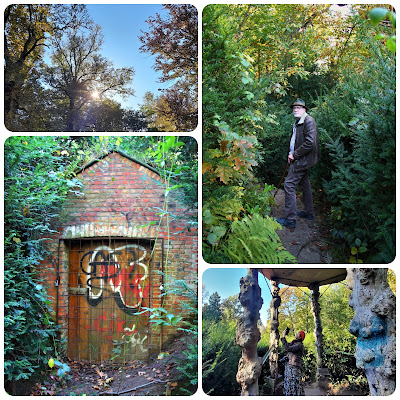 Part of the pleasure grounds of a manor house now much modernized and turned into a hotel, the park has a semi-hidden treasure in the form of an ice house. Not much to look at, its bolted door having long since sprouted graffiti, the real treasure is the spiral, yew-hedged path climbing to the top of the knoll it was built in.
Here, a gazebo resting on strangely gnarled pillars awaits, offering - yew hedge permitting - a bird's eye view across the park. Yew hedge did not permit, particularly for tiny me, who could barely see a thing even when standing on tiptoes! 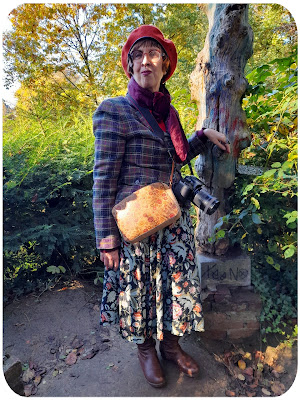 Back on safe ground - that spiral path can be a bit treacherous - we finished our circuit of the park, once more delighting in its Autumnal splendour and passing in front of a bank of pale lavender Michaelmas Daisies buzzing with the last of this year's bumblebees. 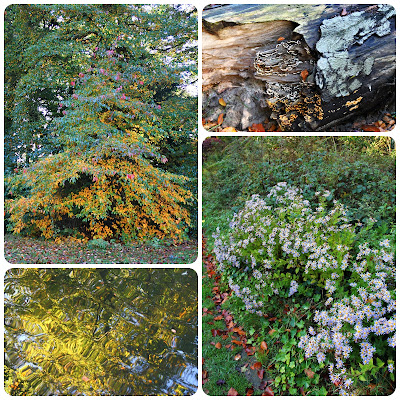 October's final week was another mild one with highs between 15 and 17°C, although there was a distinct lack of sunshine on most days.
On Tuesday, our government announced the anticipated new rules, such as the return of the mask mandate inside shops and public buildings and the introduction of the Covid Safe Pass for entering cafés, restaurants, entertainment areas and sports facilities.  We fervently hope these will bring down the number of cases and thus stricter rules or - god forbid! - another lockdown can be avoided. 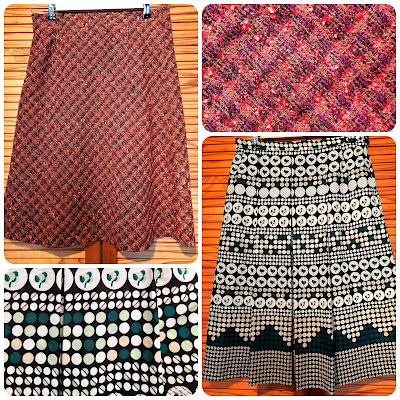 Thursday, my final working day of the week, was a gorgeous Autumn day, with lots of sunshine and a generous 17°C.
Having to work in advance for the 4-day weekend ahead, it was quite a hectic one. In addition to my usual Friday off, there was Monday the 1st of November, All Saints' Day, which is a public holiday here in Belgium.
I still managed to go for a wee little rummage at Think Twice during lunch break, finding two skirts and a dress. I love the Autumnal hues of the latter, although with its lighter weight fabric, it will need sufficient layering if I want to wear it any time soon. 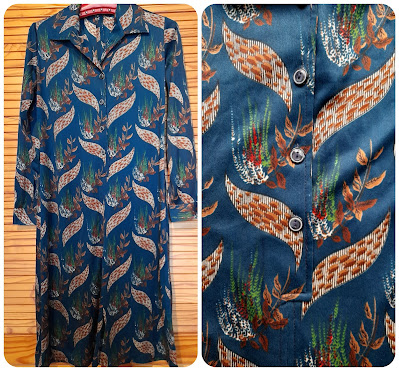 Sadly, the weather forecast for our long weekend was looking pretty dire, with rain supposedly on the menu from Friday afternoon onwards.
As we woke up to a bright blue sky and sunshine working overtime on Friday, we decided to forgo our usual charity shopping trip and go for a ramble instead.
Our destination of choice was Walenhoek, a nature reserve a mere 20-minute drive from Dove Cottage. 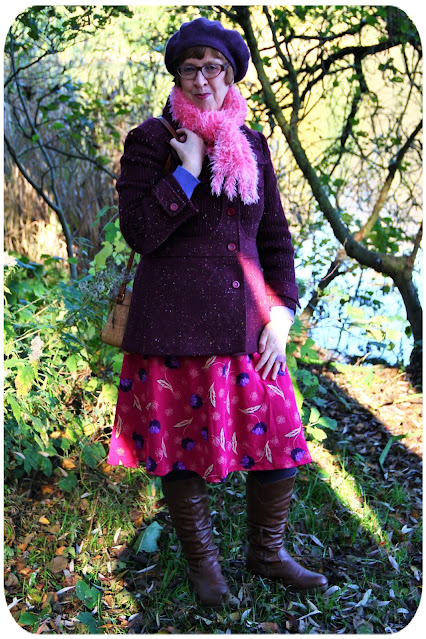 When we were last there, in early June, blood-thirsty insects made a meal of my arms and legs, resulting in itchy bites which plagued me for days. Not wanting a repeat performance, we'd avoided the place over the Summer months, so that a return visit was now long overdue!
I'm sure that any surviving insects would have had a hard time with the multiple layers I was wearing that day! 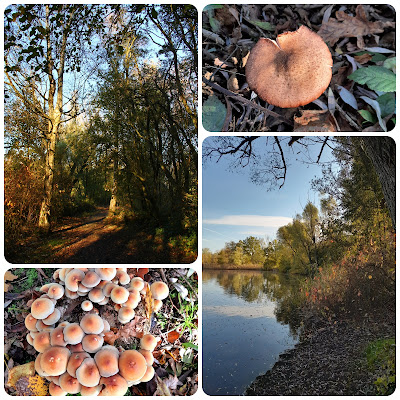 With a choice of paths criss-crossing the reserve, it is perfect for any length of walk depending on mood and stamina. For some reason, however, we always seem to end up doing the same longer circuit, perhaps with a short diversion or two if we're so inclined. 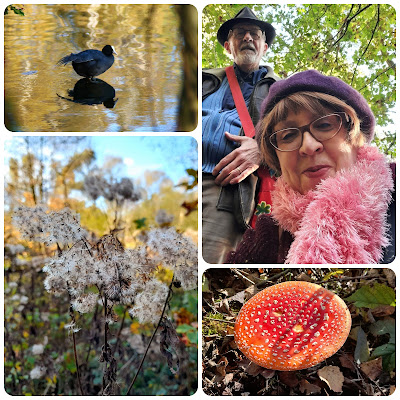 Established on the site of former clay pits, and dotted with the remnants of the area's brickmaking past, there's a plethora of ponds thriving with wildlife.
At this time of year, fascinating fungi are plentiful. It was when I was trying to take a close-up of a particularly delightful Fly Agaric with my phone that I inadvertently pushed the selfie button and ended up making the one on the top right ... 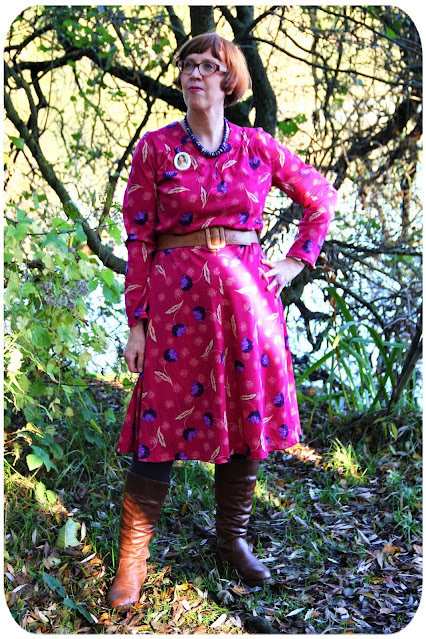 I was in a pink and purple mood that day, selecting this pink dress with lashings of purple and off-white flowers and leaves from my wardrobe. I was wearing a purple cardigan on top, which I removed for these photos. You can see it peeking out from under my coatsleeves if you scroll back to the outerwear photo. Accessories included a tan leather belt, purple and silvertone beaded necklace and one of my vintage lady brooches.
After leaving the first series of ponds behind us, we continued our walk along a path meandering through the woods towards the domain's perimeter.
Here I was mesmerized by the rays of the sun which had managed to make their way through the canopy, casting the forest floor in a magical golden glow. 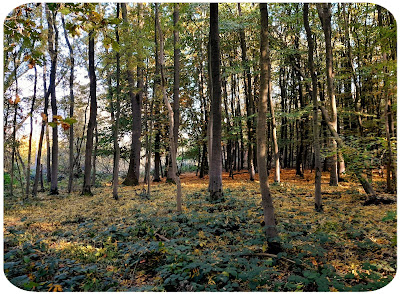 Soon we reached a second series of ponds, which might well be my favourites.
The forces of nature have been at work here, snapping trees as if they were mere matchsticks.
Below, on the top left, is one of the ruined buildings of the former brickmaking factory: an old electricity cabin with a rusty and peeling red door. 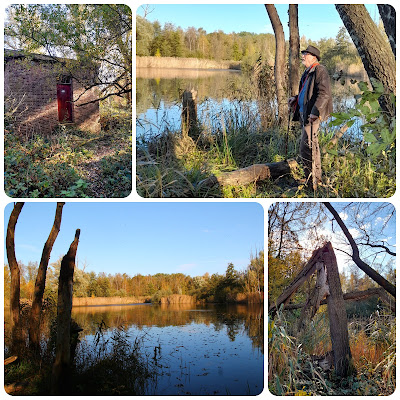 We stopped for a picnic, although we couldn't make use of our usual bench with a view due to the invasion of a group of chattering schoolchildren and their teachers. One of the latter later apologized for the disruption when the group passed the bench we were sitting on.

Other than that, we seemed to have the place almost completely to ourselves. We were even able to sit and stare for a while on the domain's most popular bench on the edge of a sandy peninsula jutting into the largest of the lakes, eating the waffles we'd packed as a dessert. 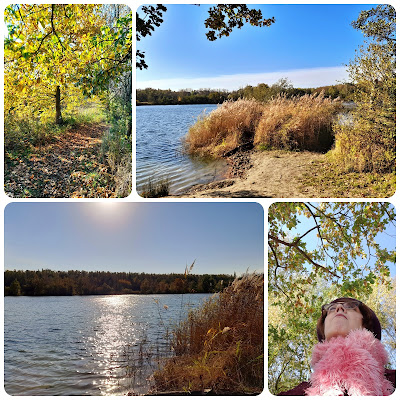 Our batteries sufficiently recharged and our heads cleared of pandemic woes, we returned to our car.

The rest of the weekend would have a considerably less sunny outlook, but that will be for my next post.

Until then, let's all make sure to stay safe!

Posted by Polyester Princess at 19:04