Time of the season

I have to confess that I've been feeling somewhat uninspired lately. The fact that I'm feeling a bit blue this time of year is nothing new, though. The darkening days always seem to sap some of my energy and if semi-hibernation would be a choice for us humans, I would be first in line.

Now don't get me wrong. I am definitely a four seasons girl and adore a crisp but sunny day in Autumn or Winter. In short, I'm a firm believer of the fact that every season has its charm. But surely there's a distinct lack of charm in a seemingly endless string of wet and murky days when a sorry excuse for daylight is all that's on offer. 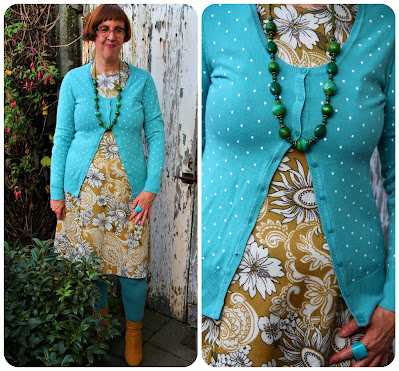 Saturday the 13th of November was yet another one of those dismal, grey and rainy days, even if the mercury managed to climb to a reasonable 13°C.
After our return from park Den Brandt on Friday, it was Jos's turn to get the sniffles, going through a stack of old-fashioned hankies before the day was done.
Nothing a couple of paracetamol couldn't deal with though, and in fact, he was already feeling a whole lot better in the morning. Still, we decided on a day of pampering and doing nothing in particular. 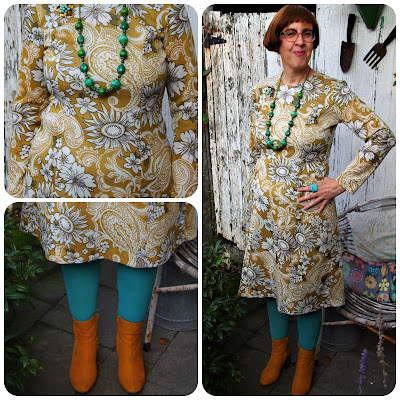 We did, however, step outside our backdoor when there was a gap in the clouds. Surely, it would have been a shame not to show you my mustard and cream shift dress patterned in scrolls and flowers.
This Crimplene beauty is an old Think Twice find and always makes me feel fabulous, which is just what the doctor ordered, I suppose.
A turquoise polka dot cardigan was added on top and I wore opaques in the same colour. Further accessories were a turquoise perspex ring and a long beaded necklace in turquoise and green. On my feet, the yellow suede ankle boots I charity shopped a couple of weeks ago. 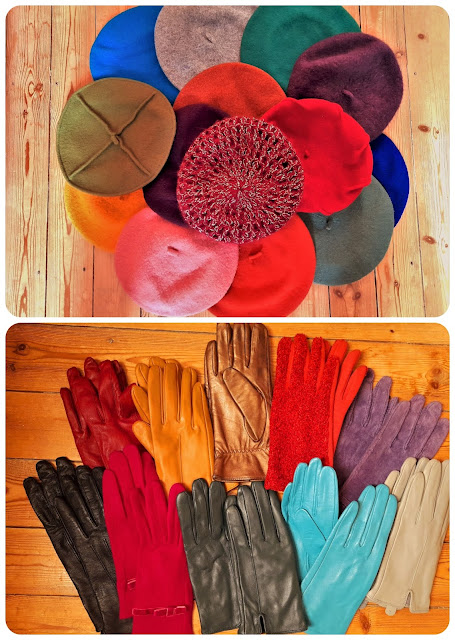 The day's pottering included sorting out my collection of berets and gloves as according to the weather forecast we would be waving goodbye to the double figures shortly.
We got a first taste of what was to come on Sunday, when the temperature dropped a couple of degrees and came accompanied by a harsh, biting wind. The kind of weather that was too uninviting to leave the house if it weren't for the fact that we'd already been cooped up inside all day on Saturday. 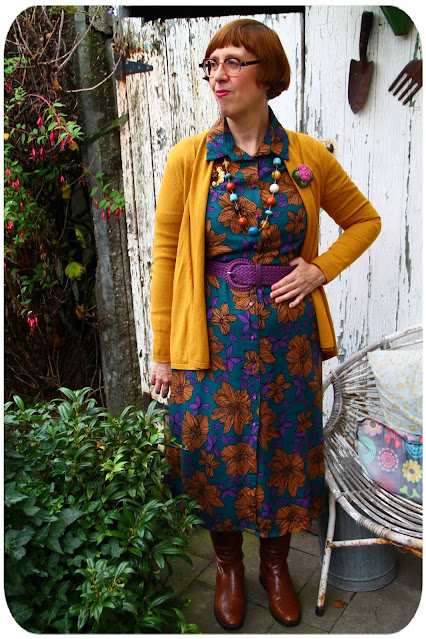 In the end, we decided on a head clearing walk around the block, getting a loaf of bread from a vending machine in the process. At the very least the wind managed to blow the cobwebs away but as it was also making our eyes water and our noses leak, we couldn't get back home fast enough.
The dress I was wearing was bought in the closing down sale of a local shop in November 2020. I knew I was doomed when I walked into that shop and indeed it had been impossible to resist this midi shirt dress in a gorgeous shade of teal printed with purple and caramel flowers. 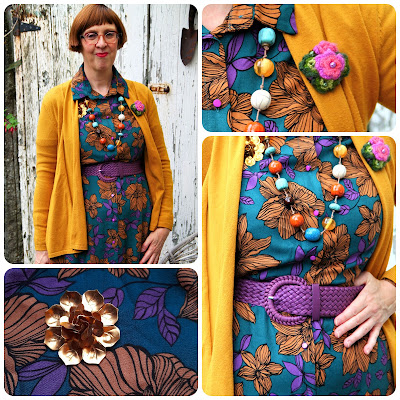 Long-sleeved but too thin to go it alone, I wore a yellow long-line cardigan on top, to which I pinned a crocheted flower corsage which was an old high street buy. The cardigan itself was charity shopped, as were the multi-coloured beaded necklace and the purple woven belt. The gold-tone flower brooch I wore on my dress was a flea market find. 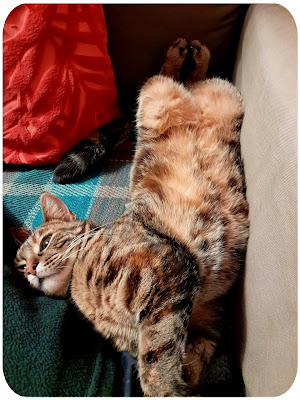 The rest of the day was spent lazing around and following the example of our little rascal who seemed to have taken up the offer of hibernation for the day.
Now what I can tell you about Monday the 15th and Tuesday the 16th of November, other than that it was cold and miserable with hardly any daylight to speak of.  On top of that, I was quite inundated with work after my 4-day weekend. 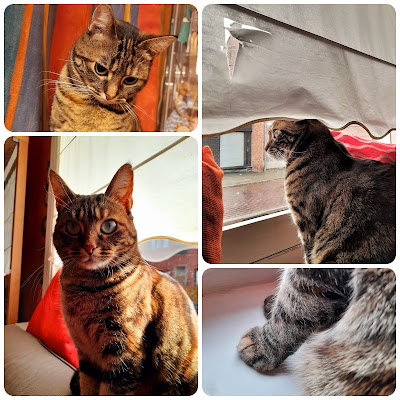 Meanwhile, Bess had been making up for lost time by causing mischief and clawing a hole in our front room blind. Admittedly it was old and in need of replacing, so perhaps she was just being helpful?
She can truly be a handful at times. This, in fact, was predicted by Jos's daughter An upon seeing Bess's picture taken at the shelter (see here, top left). Weirdly enough, she instantly spotted mischief in those sad-looking eyes! 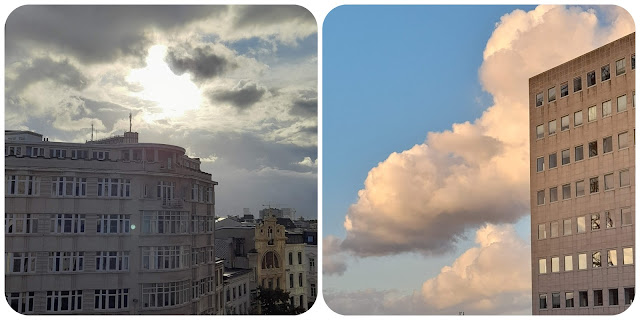 There was a slight improvement in the weather from Wednesday afternoon onwards, although ominous looking clouds were still looming on the horizon.
The best day was Thursday, when the sun was out in full force and the mercury briefly climbed into double figures again. The gorgeous weather prompted me to leave my desk during lunch break and go for a rummage at Think Twice. It still boggles my mind that I used to do this several times a week in the Before Times, while I have only managed a handful of visits in the last 20 months or so. 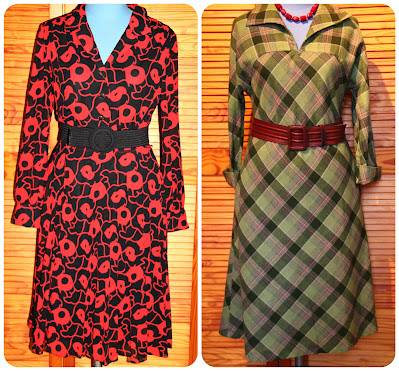 I often come away empty handed too, but not this time, as I found not one but two dresses.
While the eye-catching black and red patterned one on the left is still waiting for its first outing, I already wore the green and pink tartan one to work last week. It's by Betty Barclay and the fabric is a wool and polyester blend. 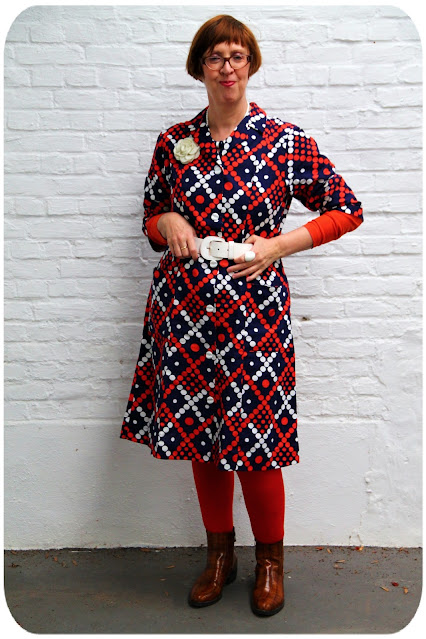 And then another week had flown by, and Friday and its usual charity shopping trip were once again upon us.
Still in double figures, the sun had nonetheless deserted us again by hiding behind a blanket of granite grey. In other words, a day in need of a good dose of colour therapy!
Enter this vintage dress charity shopped back in October. Made from a sturdy cotton fabric, this navy dress liberally decorated with diagonals of white and orange dots caught my attention when I saw someone try it on and model it in front of her boyfriend. Lurking in the aisles, I almost jumped for joy, when I saw the boyfriend shake his head and I lurked some more until I saw them put the dress back on the rails. 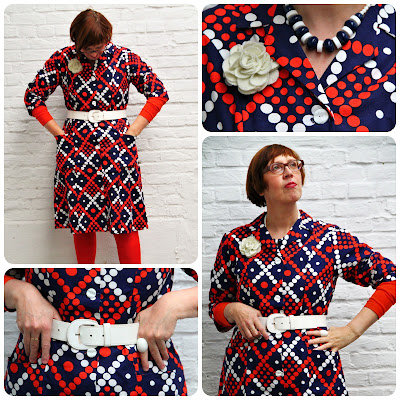 I couldn't get into the fitting rooms fast enough, so imagine my disappointment when it turned out to be a bit large on me ... As you know by now, it just needed replacing and moving the buttons!
Due to its three-quarter sleeves, I layered a burnt orange long-sleeved t-shirt underneath, then added opaques in the same colour. At my waist, a white vinyl belt while, in lieu of a brooch, which would have got lost somewhat among the dress's exuberant print, I used a white felted flower corsage. I did have a problem finding the right necklace, settling for this navy and white beaded one after quite a bit of trial and error. 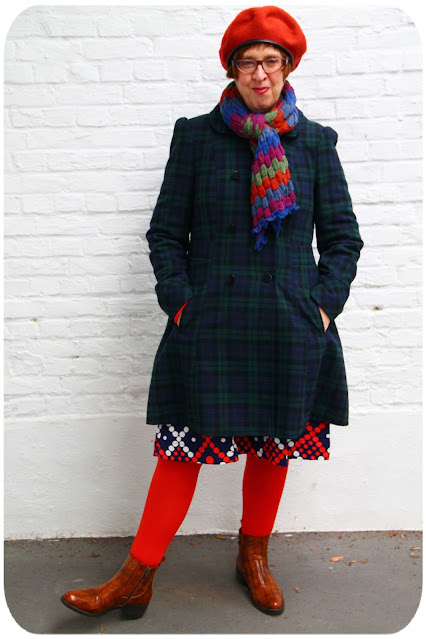 My lightweight blue and green tartan coat was a gift from my friend Inneke, and this was its first wear.
More orange was added by my beret, and the stripe of orange in my multicoloured scarf.
That day's charity shopping trip took us to the Oxfam shop in nearby Wilrijk. After striking it lucky on our previous two visits to the shop, this time nothing seemed to tickle my fancy. 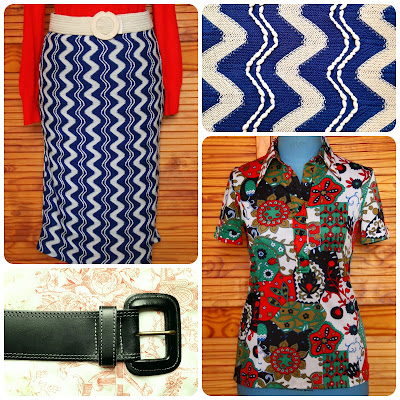 This was more than made up for at our next and final shop of the day, the Opnieuw & Co. one at the edge of our village.
Here I found a short-sleeved groovily patterned vintage blouse, which has been put away until next Spring.
For a while, it looked as if this would be my only find, but then I saw this blue and white rick rack patterned midi skirt in a loosely woven fabric. It is from &Other Stories, a shop I'm passing twice every day on my way to and from work, but have never seen the inside of.  Not only does it fit me perfectly, it looks as if it has never been worn, or perhaps just the once. 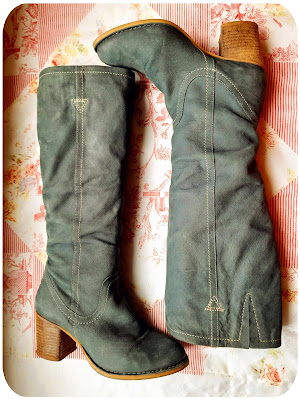 A wide, dark green leather belt was my next find.
As you might have noticed, I've been lucky in the boots department lately. I keep finding perfect pairs in my size without even trying. This time, I just couldn't bear to leave behind hese grey-green waxed nubuck beauties. 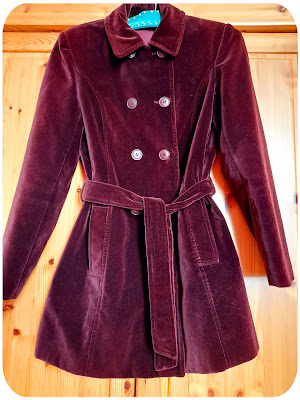 As I was heading towards the fitting room to try on the skirt, my eyes were drawn to a row of shop dummies standing duty in front of the fitting rooms.
One of them was wearing the most delicious burgundy velvet coat. Not for long though, as this turned out to be my size too. It's by C&A and, apart from some minor damage at the back of the belt, it's in perfect condition. No, I didn't need another coat and no, I couldn't leave this one behind either! 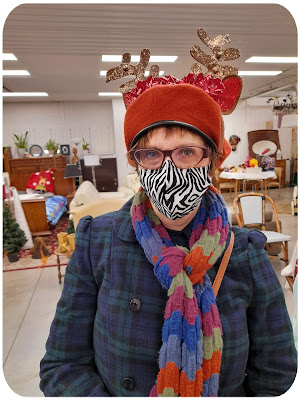 Christmas season - there, I've used the word - has already been embraced by our charity shops and although we tried to steer clear, I couldn't resist trying on a moose headpiece for fun. Perhaps the zebra mask isn't the ideal match ...
On this note, we've once again arrived at the end of this post. I hope you'll join me again next time.
Do stay safe and healthy, everyone!
Posted by Polyester Princess at 19:24