It absolutely boggles my mind that we have once again turned the calendar's final page to December.

Is it just me, or has the year really sped by even faster than usual?

2021 was supposed to be a year filled with hope, but sadly it seems that we're still in the same boat as this time last year. What's more, it has sprung a few more leaks and is now more adrift than ever. I'm paddling like mad to reach the shore before it starts sinking. 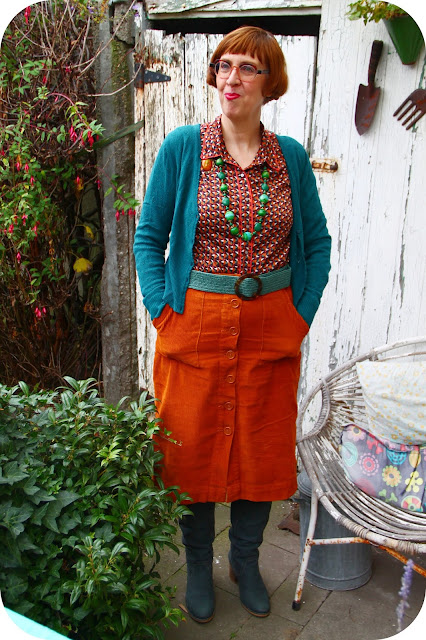 In my blog, we've only just made it into the second half of November, as no matter how fast I'm paddling, it seems to be nigh on impossible to catch up. Not that I would want it any other way. I'm finding that hindsight does tend to put things into perspective and generally helps me to accentuate the positive.
Saturday the 20th of November dawned yet another dismal day with a distinct lack of sunshine and temperatures just into double figures.
I had my outfit all figured out, or at least I thought I did. However, the skirt I'd originally earmarked to wear for my blouse's maiden voyage turned out to be all wrong. Still determined to wear the blouse, which is by CKS and was charity shopped back in Spring, I suddenly remembered this burnt orange cord button-through skirt. I'd actually downgraded it to gardening wear after its first wear in October last year due to it having a mind of its own which kept me tugging at it all day. 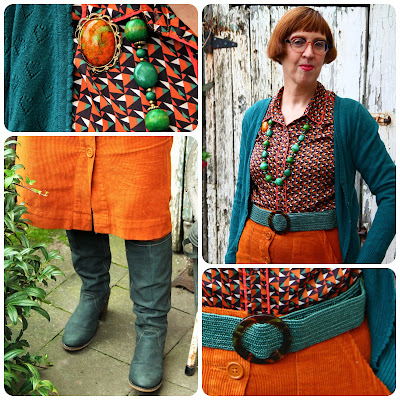 I'm glad I gave it another chance, as this time I felt completely comfortable wearing it, giving in to its slouchy properties and shoving my hands into its satisfyingly deep pockets.
The rest of my outfit was child's play, using teal for my belt, cardigan and opaques - not that you can catch even a glimpse of the latter - and pinning an orange centred brooch to my cardigan. My long beaded necklace combines both teal and emerald green, while my footwear of choice were the greyish green waxed nubuck boots I'd charity shopped on Friday. 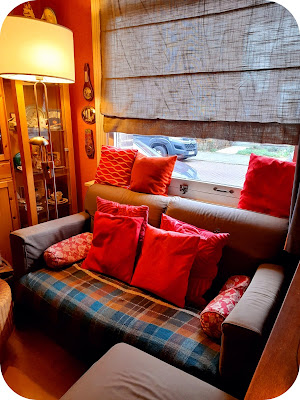 Something else we'd picked up on Friday was a new blind, which we bought brand new from a DIY and home decor store.  We'd had our previous IKEA one for over twenty years so we definitely got our money's worth. Instead of off-white, we went for a coffee colour this time. In my mind's eye, I can see Beate rolling her eyes at the fact that we didn't go for a more exciting colour, but in our defence we do have boldly striped curtains to provided the necessary colour pop.

We'd earmarked Saturday to catch up with some chores, the first one being hanging up the new blind. It just needs steaming out the creases, but we haven't got around to that yet, hoping that the problem would solve itself. 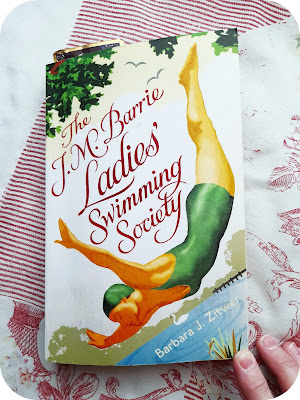 The rest of the day was spent doing a load of washing, stripping the bed and putting on fresh bed linen, running an errand at the supermarket, doing a spot of cleaning, catching up blogland and writing a new blog post. Oh, and I started a new book, which turned out to be a much-needed lighter read. It wasn't all that bad but rather superficial, and it's definitely not a keeper. There aren't too many books which make the grade nowadays, and I can hear our groaning bookshelves breathe a sigh of relief whenever I'm putting another book into the re-donation bag. I fully admit to buying the book for it's rather marvellous cover! 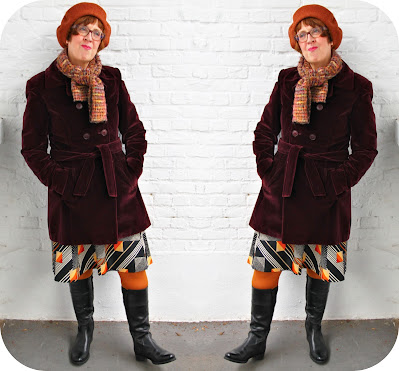 There was another edition of our recently restarted indoor flea market on Sunday, which is why we'd made sure to do all our chores on Saturday. What with all the alarming news messages about the current Covid-19 resurgence, however, we had second thoughts and decided not to risk it, even with the requirement of having to scan one's Covid Safe Ticket and wearing our masks.
For fear of sounding like a broken record, we'd once again woken up to rain on Sunday, and it continued raining on an off all morning. When it finally stopped, we thought we'd drive down to the garden centre for a mooch around. Me and my twin couldn't wait to wear our vintage C&A burgundy velvet coats! 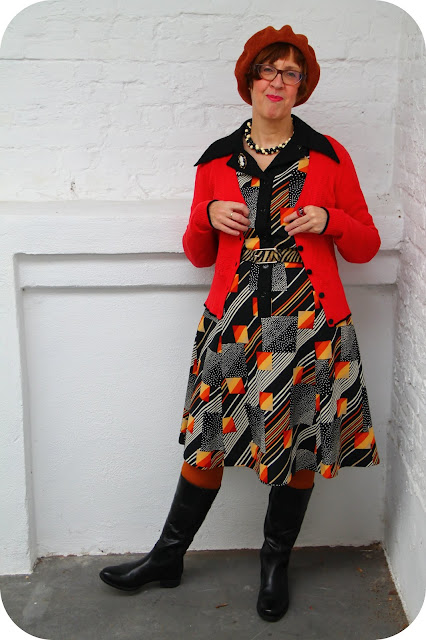 Underneath, I was wearing one of my black based dresses, a 1970s Swedish "Petri" one, with a riotous geometrical pattern in white, red, orange and the palest of yellows. It has made it to the blog many times before and I don't need to revisit these past posts to know that orange often featured in its accessories.
Although I did wear a pair of burnt orange opaques, I tried to break the mold this time by adding a red rather than an orange cardigan and opt for black and white accessories. I'm finding that my zebra print belt seems to go with rather a lot of things. 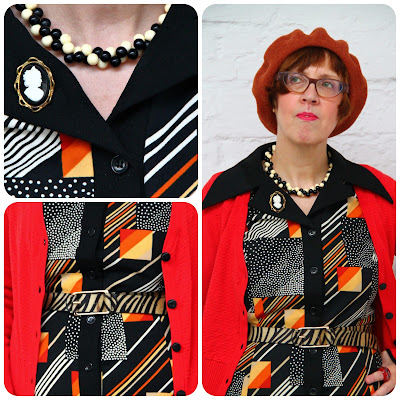 On our way back from the garden centre, we were regaled by a brief sunny spell, a moment I swiftly eternalized with my phone's camera! 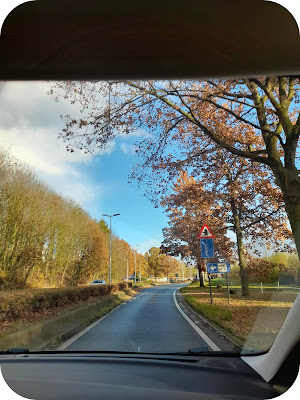 Apart from picking up a new bird feeder, we also came home with a replacement Snooze Bay for Bess.
When we bought the original blue one before Bess came home with us, we were fully expecting it to be totally ignored, so we were chuffed to bits when she started using it. Then she developed the habit of flattening it by jumping on top of it, where we often found her curled up and fast asleep. Nevertheless, the minute we put it up again, she was in there like lightning, kneading and purring like mad. It never lasted though, and she'd flattened it again before we knew it. 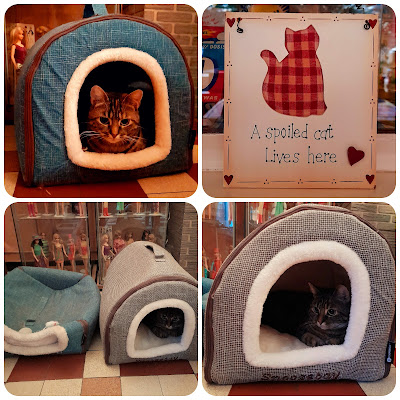 We'd tried giving her an open cat bed but she never went near it, so we thought we'd buy her a second Snooze Bay to use as originally intended.
After giving it the side-eye for a couple of minutes, we were pleased to see her go inside and, after a spot of sniffing and kneading, actually lie down in it. Result!
The new working week went off to a good start. It was slowly but surely getting colder, just 8°C with a touch of frost in the morning on Monday. We were in luck, though, as the sun joined us for most of the day.
In spite of it getting busier and busier at work, I went for a walk during lunch break, having made the conscious decision to do so every day - weather permitting, obviously - and make some photographs of things that caught my eye. 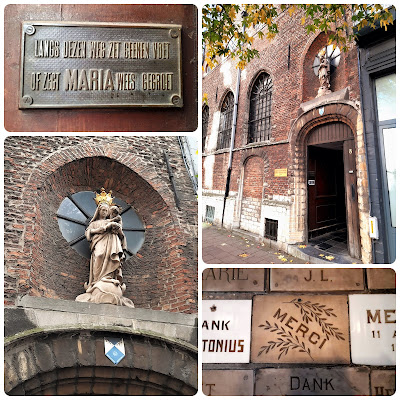 Although just a stone's throw from my office - and actually visible from my office window - I'm ashamed to admit that I'd never been inside the small Chapel of Our Lady of Refuge. Hemmed in between high street shops on the Schoenmarkt (Shoe Market), it is locally known as the Shoemakers’ Chapel, although apparently it has nothing to do with the trade.
I couldn't help but smile at the plaque just inside the entrance (top left) which urges you not to set foot inside without saying a prayer to Mary.  It doesn't sound like much this way, but it actually rhymes in Flemish, which makes it quite charming!
On the bottom right are just of a few of the dozens of ex-votos, votive offerings in gratitude, or thank you-notes if you please, lining the entrance hall. 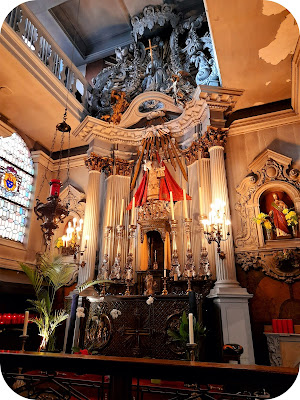 The small Gothic chapel dates from the 15th Century and has been renovated many times over the years. It used to belong to some almshouses established in 1343 for twelve destitute women.
The chapel is an oasis of quietness and devotion - an older lady and a young Asian girl were praying there during my visit - and has, through the years, offered a refuge for everyone regardless of rank, social class or age.
In fact, until the 1970’s quite a few of Antwerp's prostitutes came here to say their prayers, which earned the chapel its alternative nickname of the "Whores' Chapel" 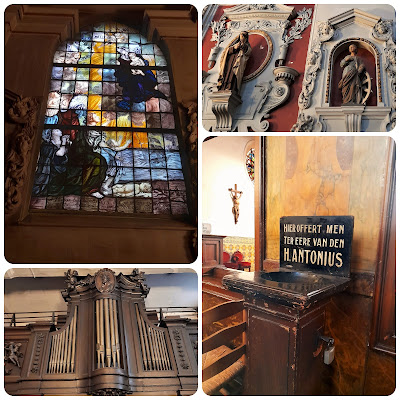 Tuesday started off in the same way as Monday, and this time I decided on a slightly longer walk during my break.
After passing one of Antwerp's multitude of city bike stations, belonging to a public bike hiring system called Velo, I entered the Hendrik Conscience Square. Named after the Belgian author (1812 – 1883) who is considered to be the pioneer of Dutch-language literature in Flanders, this square used to be the haunt of us punks back in the late 1970s and early 1980s. 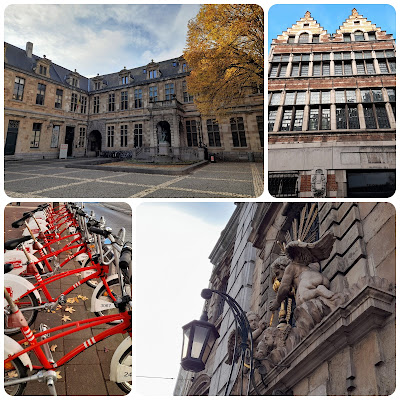 The square is dominated by one of Antwerp's gems, the lavishly decorated baroque Sint-Carolus Borromeuskerk (St. Charles Borromeo Church).
Built for and by the Jesuits between 1615 and 1621, in the middle of the Counter-Reformation period, words failed to fully describe its magnificence even back then, certain people calling it heaven on earth or the eighth wonder of the world. 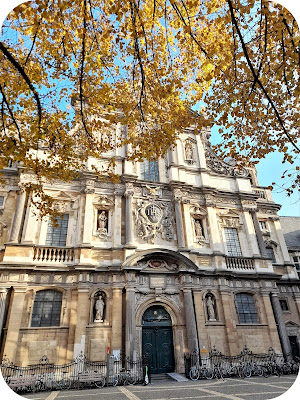 None other than Peter Paul Rubens played an important role as a painter, decorator and architect. His influence is visible in the tower, façade, high altar and the vault stucco in Our Lady’s Chapel. Sadly,  the 39 ceiling paintings by his hand were lost in a fire when lightning struck the church on 18 July 1718. 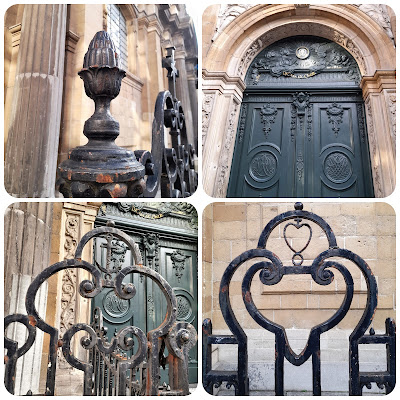 Since 1803 the St.-Carolus Borromeuskerk has been in use as a parish church.
During the Dutch reign preceding Belgium's independence in 1830 the church's lavish interior was stripped and turned into a Dutch Reformed Church. A restoration campaign in the 1980s brought the church back to its original splendour.
The church wasn't open at the time of my visit but I promise to return one day during opening hours and take you along with me. 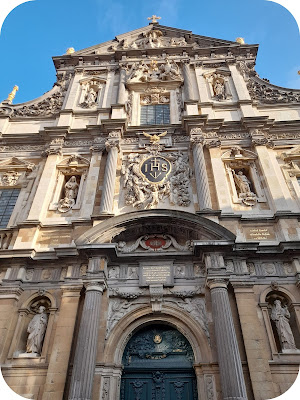 I'd only just returned to the office when clouds started gathering, bringing along torrential rains which lasted for most of the week.
Even the weather forecast for the weekend ahead looked pretty dire, but that, my friends, will be for my next post.
Until then, do stay safe and healthy, everyone!