Clouds got in my way

Although it had been pelting down on and off since our return from our walk in the sculpture park on Saturday afternoon, the weather gods seemed to have temporarily dried their tears on Sunday morning. Without Saturday's partial sunshine, however, the day's highs of 5°C felt quite a bit chillier.

I had a couple of chores to tick off my list, starting with wrestling a couple more Winter coats from their out-of-season hidey-hole, and putting away my lighter scarves in favour of some warm knits.

This was followed by the pleasurable task of assembling outfits for the upcoming working week. This is something I try to do every Sunday, playing around with my wardrobe and making sure I've got plenty of possibilities to choose from on dark weekday mornings, on which my inspiration seems to have done a runner. 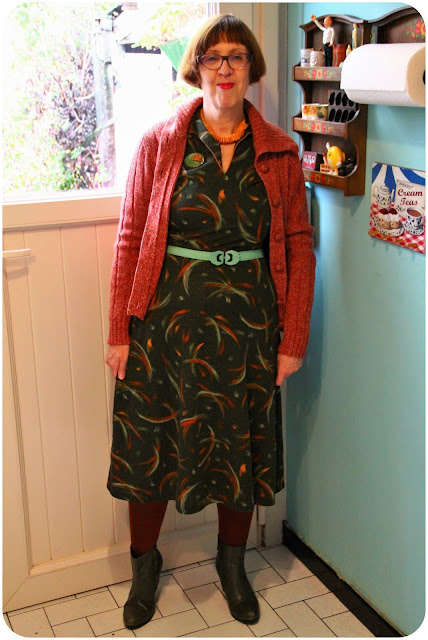 By the time we'd finished the somewhat less pleasurable task of dusting the dining and sitting rooms, the rain could be heard lashing against our windows again.
With the world outside Dove Cottage's windows looking pretty uninviting, there was no way we would be stepping into the garden for outfit photos, so we made use of a corner of our kitchen instead. 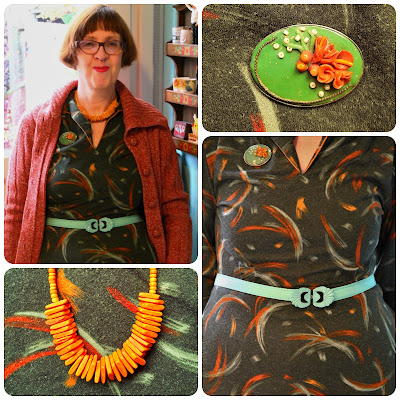 I was wearing  a wool and polyester blend long-sleeved vintage dress, its deep forest green swirled with orange and mint green. The rust coloured marl knit cardigan was a charity shop find from several years back and helped to keep the worst of the chills at bay.
For the sake of the photos, I donned my forest green wedge-heeled ankle boots, offering a generous peek at my dark rust opaques.
My belt with its intriguing buckle used to belong to a dress which wasn't me and was redonated sans belt. The brooch was a flea market find back in April 2016 and the necklace with its stack of tiny orange tiles was charity shopped last year. 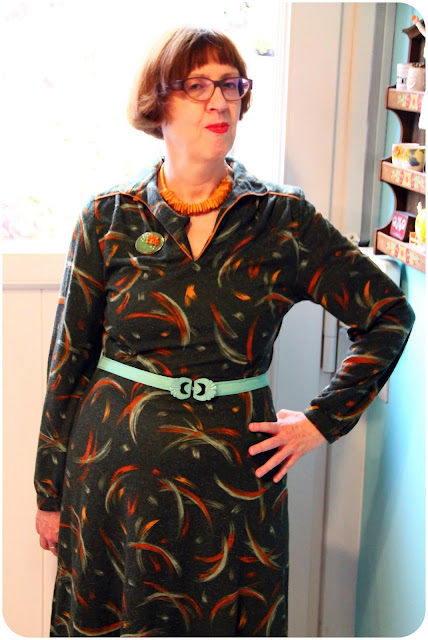 I always think Dove Cottage really comes into its own this time of year, with its plethora of table lamps highlighting the treasures we've collected over the years.
One of our recently acquired treasures, of course, is Bess! Her latest thing is watching the wildlife in our garden from the edge of the sink below our kitchen window, often raising herself on her hind legs when she spots any quick-as-lightning blue tits making use of the feeder under the awning. 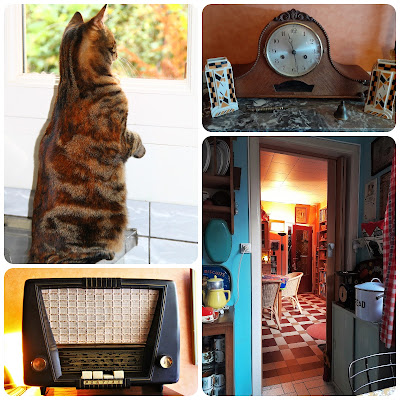 On the bottom right is a view from the kitchen into the dining room, with its original 1930s tiles.
The pretty wooden pendulum clock, found by Jos in a local junk shop, is ticking away in our sitting room, flanked by a pair of cheap as chips charity shopped Art Deco vases. The Bakelite radio dates from the early 1950s is still in working order, although its choice of stations is obviously rather limited, and was picked up at a charity shop event in March 2016. 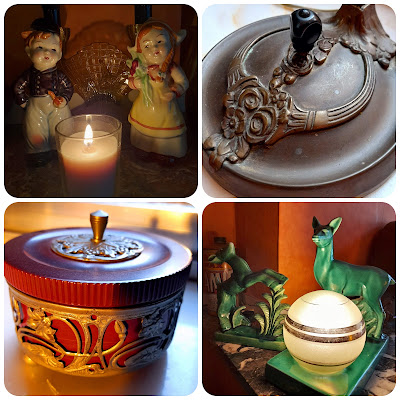 The ceramic couple on the top left, wearing traditional Dutch costume, is identical to the pair which used to grace my paternal grandparents' mantelpiece. Alas, the originals didn't survive but these two offered an instant flashback to my childhood when I came across them when browsing at a flea market.
There's some Art Nouveau loveliness in the lamp base on the top right and the trinket box on the bottom left. The 1930s green deer lamp was love at first sight at an antiques fair. And what were the odds of finding the matching deer ornament on its left at a flea market only a few months later! 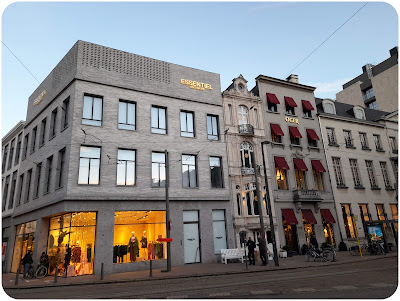 Typically, Monday saw a brief respite from the rain, although it was quite chilly in morning so that I wore gloves for the first time this season. It warmed up to 8°C with lots of sunshine though.
While I was waiting for Jos at our usual pick-up point after work, I thought I'd make a photo of Essentiel Antwerp's flagship store on the opposite corner for Sheila! 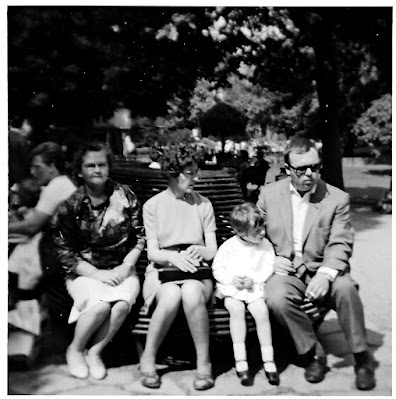 Tuesday the 30th November would have been my Mum Alice’s 86th birthday. Sadly, we lost her all of twenty years ago. As if on cue, the day was as dismal as they come, with hardly any daylight worth speaking of and a veritable deluge.
Here she is, in 1965, flanked by my paternal grandmother, a 4-year old me, and my Dad. The photo is taken at the zoo in Antwerp, and this delightful time capsule is one of my all-time favourites.
The rest of the working week brought a mix of sunny spells and showers, with the temperature dropping from a reasonable 9°C to a rather goosebumpy 5°C from Wednesday to Thursday. 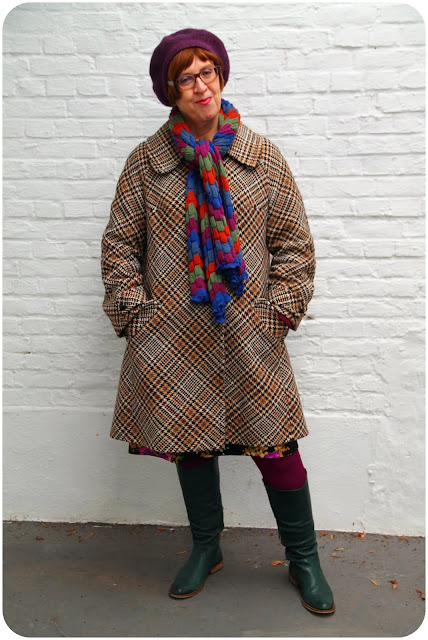 In spite of the fact that I'm often finding it a struggle to get through my 4-day working weeks, they do seem to speed by at an alarming rate, with Friday rolling along in no time.
Not surprisingly, it was another dismal day. Although it remained mostly dry, a harsh, eye-stinging wind made it feel much colder than the 4°C indicated by the thermometer.
The powers that be had been sitting together trying to come up with a new set of rules since 9 'o clock that morning, but wild horses couldn't have kept us from our weekly charity shopping trip. Besides, some good-for-the-soul rummaging was just the ticket to take our minds off things.
Trying to give all my Winter coats the chance to shine, it was now the turn of my plaid vintage swing coat, charity shopped back in the mists of time. I'm sure my beret and scarf do not need further introduction. 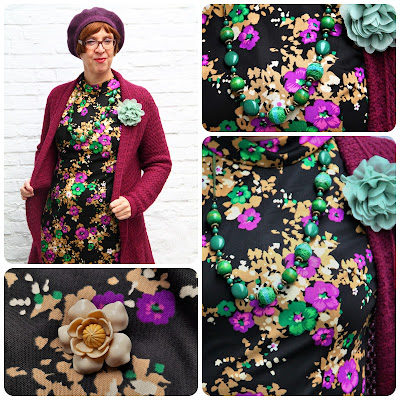 Underneath my coat, I was wearing a vintage black floral shift dress from Think Twice, topped with a maroon long-line cardigan and ditto pair of opaques. Pinned to my dress was a cream celluloid flower brooch, while a mint green flower corsage adorned my cardigan. The finishing touch was provided by a necklace combining both wooden and raffia beads in shades of green.
Everything except for the tights, but including my beloved green boots, is vintage or at least second-hand. 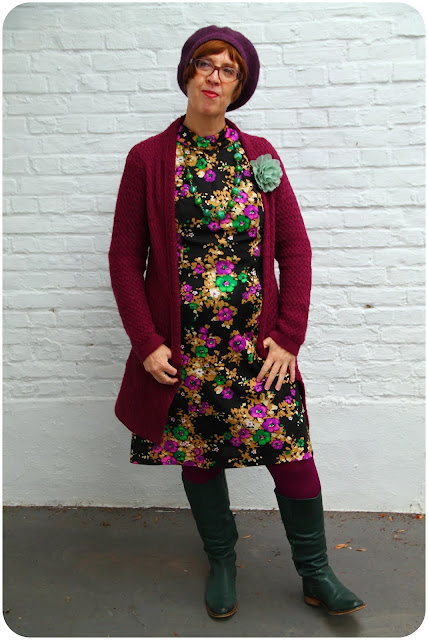 Pickings were meagre at the first shop we went to, my rummage only yielding these two necklaces. While the pink one is vintage, the chunky reddish brown and pale green one is by Belgian costume jewellery label Les Cordes. 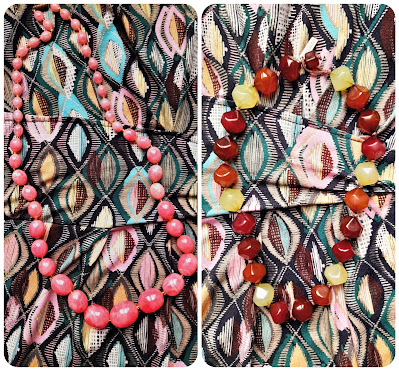 If you're intrigued by the background these were photographed against, it belongs to a dress I found in our second shop of the day. An easy-going dress with sporty trim at the neckline and some very forgiving folds at the waist and hips, I simply couldn't resist its gorgeous print. 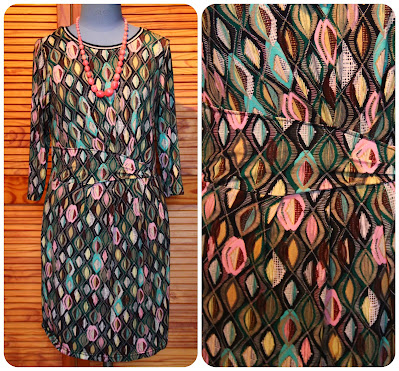 A brown wool and polyester blend plaid skirt and a King Louie cardigan in a delectable shade of green were my final pickings of the day. 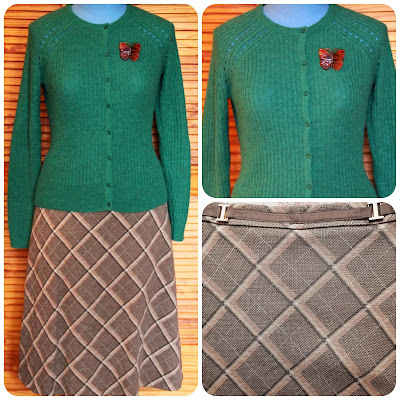 Back at home, there was news on the new rules, none of which concerned us very much. These included the wearing of masks for all children from the age of six, a week's earlier start to the Christmas holidays for schools and the cancellation of all indoor events involving +200 people. The main source of infections seems to be in primary schools at the moment. And then there's the new Omicron strain which seems to be slowly but surely heading in our direction.
The most surreal news of the day, however, came from the zoo in Antwerp, where two hippos turned out to have tested positive for Covid-19. I won't blame you if like me you had to read this twice to make sure that your mind isn't playing tricks on you ... 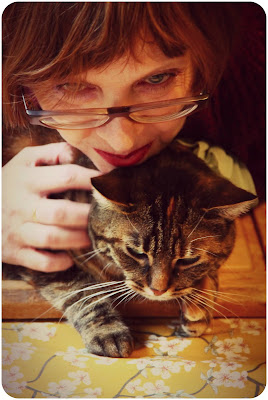 Crazy, crazy world! Surely this needs a cuddling session with our Bess. No enforced cuddles where she is concerned, though, she is actually asking for them. After spending 12 years in the company of grumpy Phoebe, we are definitely not used to this kind of cat behaviour! 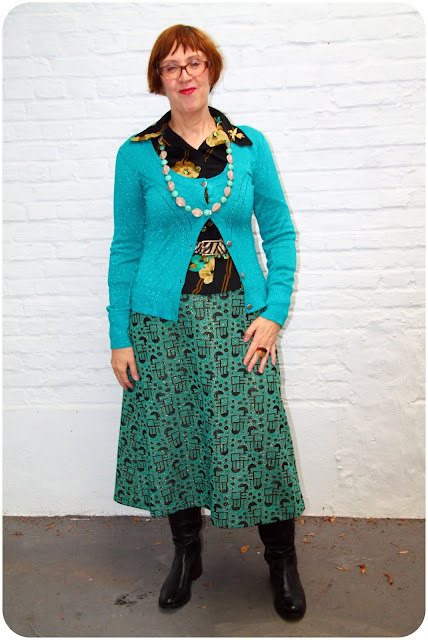 It looked set to be a wet weekend, starting with a rainy all-dayer on Saturday.
To make up for the lack of proper daylight, I dressed in sparkles! Well, I actually did that so that I could participate in Nancy's Good Buy/Good-Bye Book.
My outfit was based around this sparkly turquoise midi skirt with its striking black geometric pattern. After wearing it only once upon finding it in the Think Twice sales back in November 2017, it had been languishing in my wardrobe ever since, as admittedly it was somewhat snug in the waist. 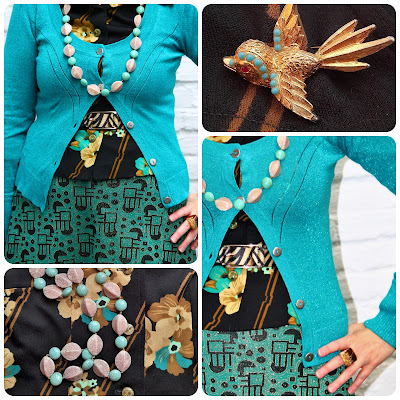 A Good-Bye, then? Well, no. It turned out to be just a matter of moving the waist button a bit to make it a Good Buy after all! It only took me 4 years to think of this!
I added more sparkle with my turquoise cardigan charity shopped last year and if you look closely there's some sparkle in my ring as well.
The black vintage blouse with its tan stripes and tan and turquoise flowers was another Think Twice find. My zebra belt was making another appearance too, while a charity shopped cream and turquoise necklace and a - yet again sparkly - bird brooch found at a flea market completed my outfit. 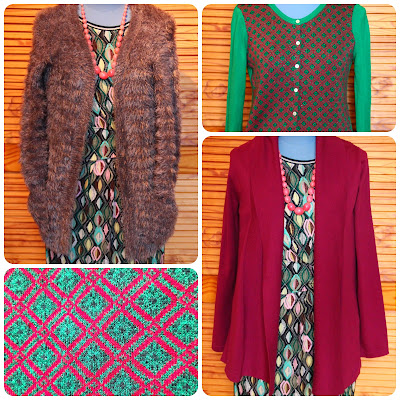 With any outside activities out of the question, but needing to flee the house if only for an hour or so, we drove down to the slightly smaller charity shop in the neighbouring village of Reet.
I've been on the lookout for more long-line cardigans, but so far the charity shops haven't exactly delivered. Much to my delight two of them were waiting for me here, a fluffy grey one and one in a delicious raspberry colour.
My final find of the weekend has some sparkle too, although it turned out to be nigh on impossible to photograph. This festive green and red cardi is by the delightfully named but far too expensive Belgian label Lucy has a Secret. At just € 4, I'm sure you'll agree I couldn't say no!
And with that, we have once again reached the end of this post. My 500th post, to be exactly! How did that happen?
Posted by Polyester Princess at 18:49