The ghosts of Christmas past

I might have left you with a bit of a cliffhanger after ending my previous post with a picture of this year's Christmas tree.  As many of you have guessed, the furry creature who became part of our lives back in March has not been able to resist the tree full of potential cat toys which had suddenly appeared in our sitting room.

She had been fast asleep in her Snooze Bay while we were setting it up and decorating it, and it was only after we were sitting down and admiring our handiwork that she finally walked in. She briefly stopped in her tracks in the doorway, then cautiously advanced upon the strange contraption full of tiny lights and dangling objects. 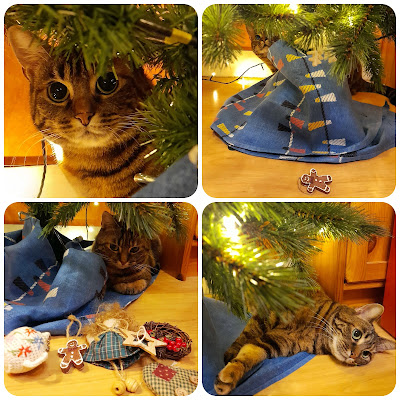 She'd dislodged the first of the latter - a felt icicle - within minutes, soon followed by one of the rag angels, a raffia teapot and a resin gingerbread man. I must have redecorated the bottom half of that tree dozens of times in the past two weeks! Apart from when she starts chewing the branches or the fairy lights, we just let her be and have her fun. 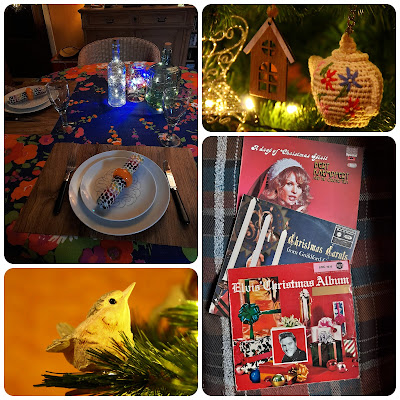 Christmas has come and gone by now but although my blog's ramblings haven't actually reached the festive season yet, I don't think it would do to post about Christmas in January. So, let's get that done and dusted, shall we. Not that we did much on the day. We never do. Although we no longer stay in our pyjamas all day like we did years ago, as the weather was a wet affair we didn't go for a walk like we did the last couple of years either.
Instead, we lounged around, reading and listening to our three Christmas albums, which got their yearly outing, as did my parents's best dinner service, which they got as a wedding present in 1957. 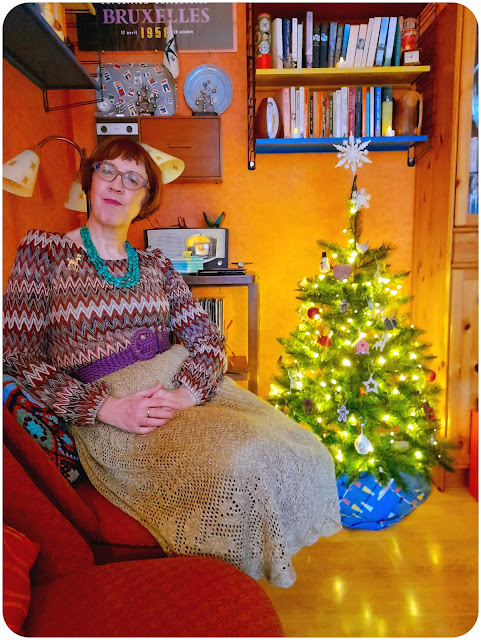 You're getting a sneak preview of my outfit too, which was built around this sage green crochet skirt which I'd found in a charity shop the previous day. More details, as well as a closer look at the rest of my outfit, will follow in a later post!
With that out of the way - phew! - I'm taking you back in the bloggy time machine to the week before last. In spite of the reasonably balmy temperature, which would remain between 10 and 12°C from Monday to Thursday, clouds kept getting the better of the sun for most of the time. 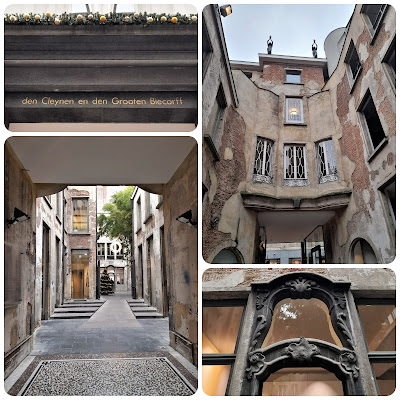 On top of that, as usual in the the run up to Christmas it was getting busier in Antwerp by the day, although it wasn't yet on a par with the mad crowds I would have to negotiate a week later.
For now, all was right as long as I avoided Antwerp's main shopping thoroughfares in favour of the city's quieter spots during my lunch breaks. One day, as I was on my way back to the office, I passed "den Cleynen en den Grooten Biecorff” (transl. the small and the large beehive), a restored historical complex built around a central courtyard, now housing a selection of luxury boutiques and other exclusive businesses.
According to their website, the Biecorff complex is a beautiful fusion of the remnants of old architecture and contemporary design. In other words, the partly plastered walls are a design element and not a sign of neglect. In spite of its obvious pretensions, I couldn't help but be charmed. 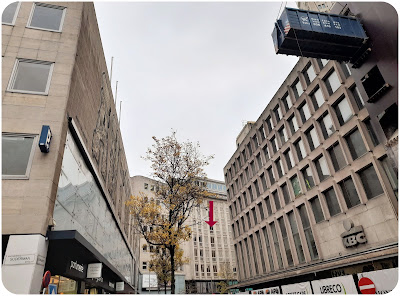 From here, it's only a stone's throw to my office building in the middle of the concrete jungle. The arrow helpfully points to the 5th floor windows behind which I'm spending my office days. Antwerp's main shopping street stretches out just around the corner.
On Thursday - we were the 16th of December by now - I decided to throw caution to the wind and walk to Think Twice for a long-overdue browse. Imagine my delight when I found not one but two vintage dresses in such a pristine condition that I doubt they have ever been worn. 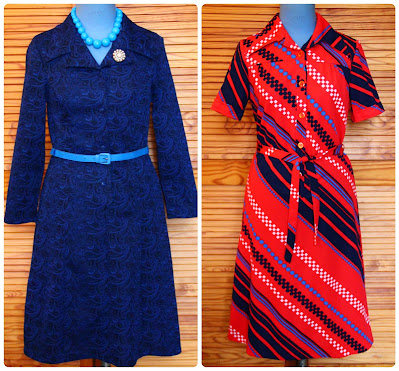 My Friday off started grey and mizzly, a persistent fog accompanying us through most of the day. With the temperature having dropped several degrees as well, our plans for the day didn't exactly involve a walk in the park. Nevertheless, that's what we ended up doing after that morning's charity shopping trip.

In fact I think the impromptu walk and the outfit I was wearing deserve a post all of their own, so again I am just treating you to a sneak preview, which actually captures the walk's mood perfectly. 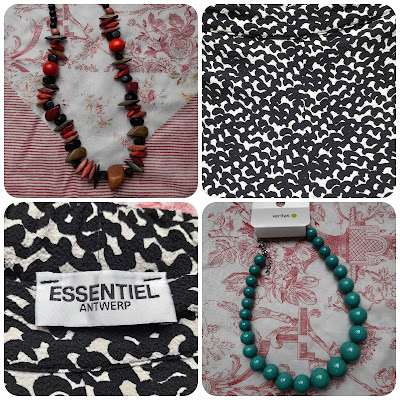 But I did mention charity shopping, so how about I'll show you my finds instead?
The above all came from the charity shop near the park. Both the coloured wooded beads and the teal plastic ones were deadstock, the latter still retaining its tag from haberdashery and accessories shop Veritas. The black and white patterned item of clothing is a pair of slouchy trousers which didn't photograph well on a hanger. Nor could they be modelled by "legless" Angelica, obviously! They are by Essentiel Antwerp and I'm wearing them as I'm typing this. Much better than pyjama bottoms or - god forbid! - athleisure wear! 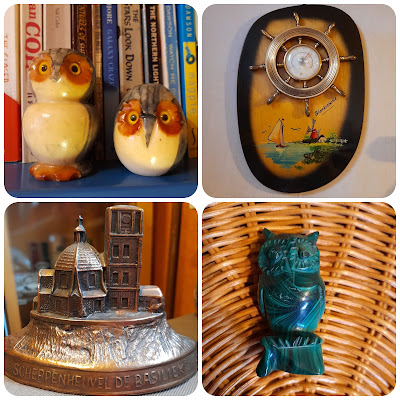 Lots of little treasures found their way into our basket in the first shop.
Sometimes, it is obvious that people's painstakingly accumulated collections have been donated by relatives who just want to be rid of them. This time, there were several of these instant collections, one of them being a motley collection of owls. They were priced between € 0,30 for the malachite one on the bottom right, and € 0,60 for each of the Italian made alabaster ones on the top left.
On the top right, another addition to our collection of souvenirs plaques, this one from Belgian seaside resort Blankenberge. Finally, on the bottom left, a brass replica of the basilica of Scherpenheuvel, a famous Belgium place of pilgrimage. 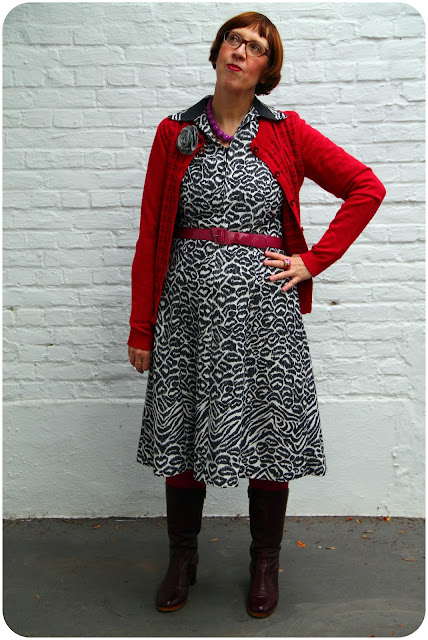 Oh, and this vintage wool and polyester blend dress came home with me as well. What's more, after trying it on when I got home, I couldn't wait to wear it the very next day.
I fell for its mix of leopard and zebra print in shades of charcoal and white. Can you believe that, apart from a handful of accessories, I haven't had any animal print in my wardrobe since my punk days? 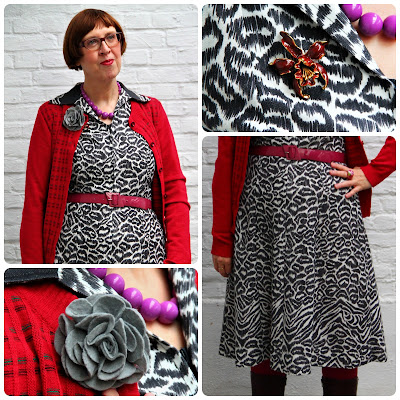 I used berry shades for my cardigan, belt, opaques and orchid brooch, added a magenta beaded necklace and pinned a grey felted flower corsage to my cardigan.
It was yet again a matter of being all dressed up with nowhere to go, as the weather gods continued being badly behaved, treating us to dark and dismal weather for the rest of the weekend. In fact, we only made it to our garage based photo studio on Saturday as we had an errand to run. 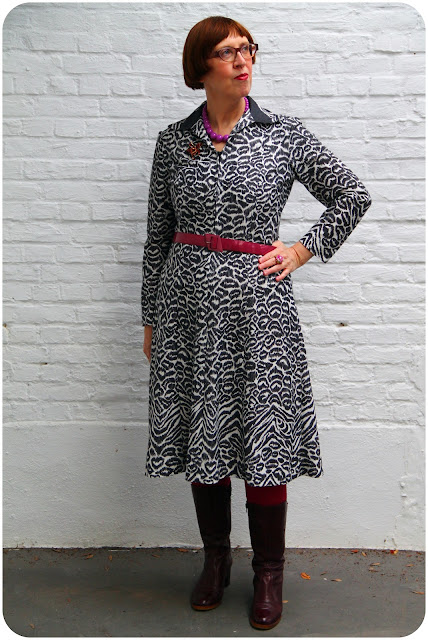 The only sunshine on Sunday came courtesy of our daylight therapy lamp, which we basked in during our breakfast of omelettes with ham and mushrooms. 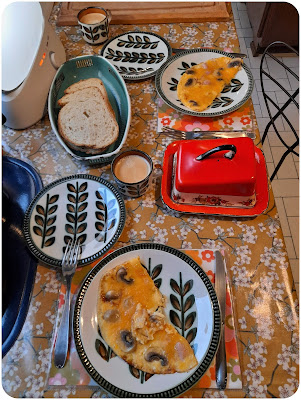 It was another day of pottering around the house, doing this and that and nothing very much at all.
I did curate my collection of necklaces, though, as my display rack was buckling under their weight and it was becoming quite problematic finding what I was looking for. 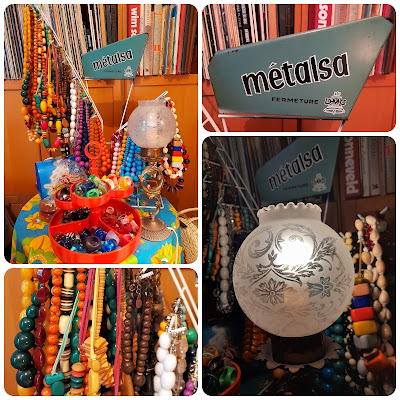 It still boggles my mind that it was almost twice as full before the cull! The rack, by the way, used to be a shop display rack for zips in its previous life, and was found in a vintage shop in December 2017.
The orange Better-Maid party dish is home to my rings, 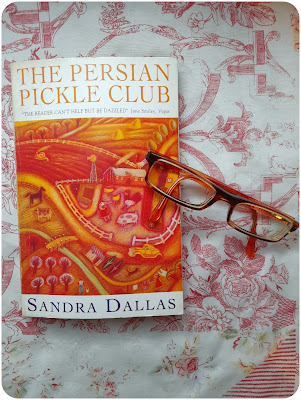 Pottering activities done and dusted, I finished the book I was reading. This was another non-taxing read which seems to be all my brain can cope with lately.  The novel explores the ties of loyalty and friendship that unite the women in a quilting circle in Depression-era Kansas,
Oh, and I almost forgot to show you what I was wearing. 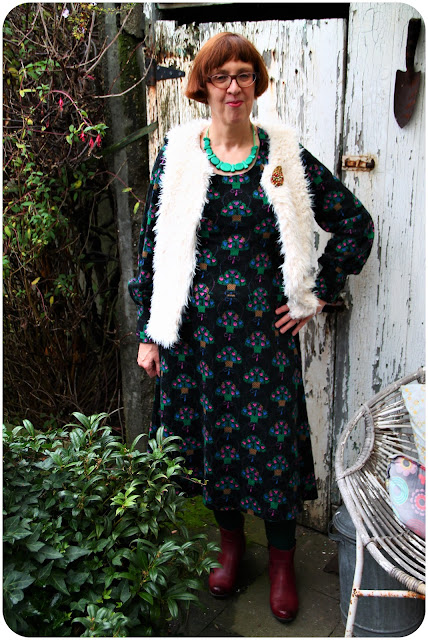 My black midi dress with its pattern of flower baskets is another vintage find from Think Twice and another wool and polyester blend.
The snuggly faux sheep vest came from a high street shop, as did my white plastic ring. Together with my opaques, these are the only retail items in my outfit. 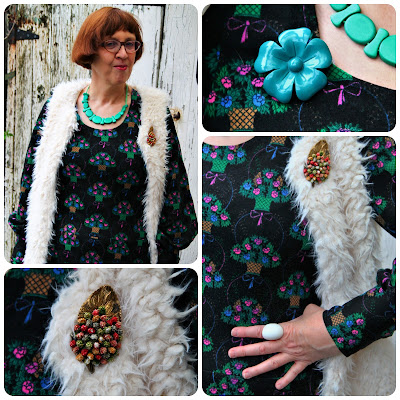 The green wooden necklace was charity shopped last year, while both of my brooches came from the "Brooch Lady", and eighty-something lady who used to sell her collection of 2000+ brooches on some of the flea markets we frequented.  What with the pandemic, I often wonder what has become of her ...
If all goes well, I will be back with one final post this year. Until then, please do stay safe!
Posted by Polyester Princess at 18:48