Not everything is black or white

In just a handful of hours, it will be time to say goodbye to this funny old year. I expect it to fizzle out rather than go out with a bang but, well, let's face it: there's not much cause for celebration, is there?

The hopes we might have had at the start of this year have fallen by the wayside, all but crushed into oblivion by the force of an invisible enemy.

As the days go by, it's not just hard to remember what the Before Times* were like, sometimes it's almost impossible to get one's head around the fact that such times ever existed.

And yet, I've picked myself up again, and again, and continued living through the wasteland of days, which have knitted themselves into weeks and then months, until they completed the tapestry of another year.

* Thank you Sheila for this very apt term! 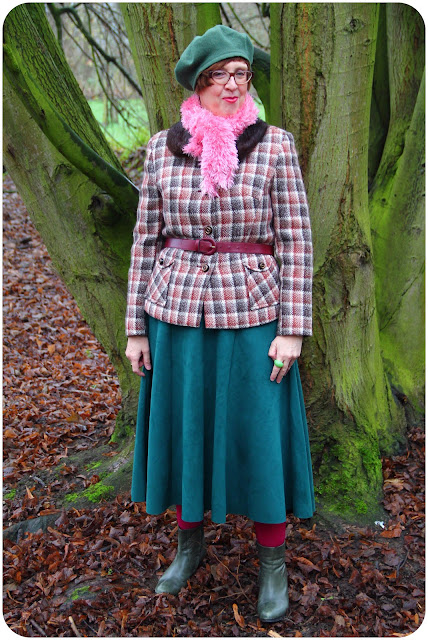 Christmas was still in the future when we set out on a wintry walk on Friday the 17th of December, and so was negotiating the manic Christmas shoppers which would frazzle my nerve ends in the week to come.
The solid greyness of the day had been joined by a lingering fog, and a fine drizzle was coating my glasses as we ventured into the park after that morning's charity shopping.
Too miserable for a walk, our aim was to look for a suitable spot to take some outfit photos. 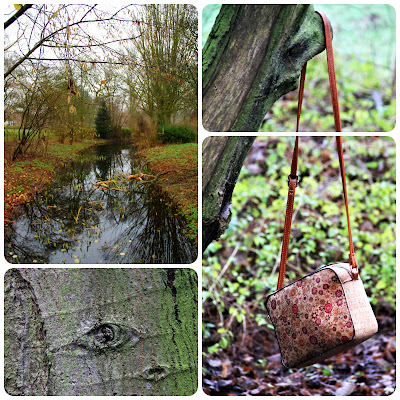 Crossing the park's overflowing brook, we squelched through the sodden mulch towards a gnarly multi-stemmed tree which seemed perfect for the job. It even had a handy hook to hang up my cork handbag.
I'll show you the details of the rest of my outfit in a minute, but for now a look at my outerwear will have to do. I wore a plaid wool jacket in delicious shades of chocolate, cinnamon and cream. It's got the softest furry collar ever and I found it in a vintage shop opposite my hairdresser's in November 2019. Due to its rather boxy shape, I always wear it belted, this time opting for a burgundy leather one. Both the green beret and the pink boa were charity shopped and need no further introduction as they've both appeared here countless times. 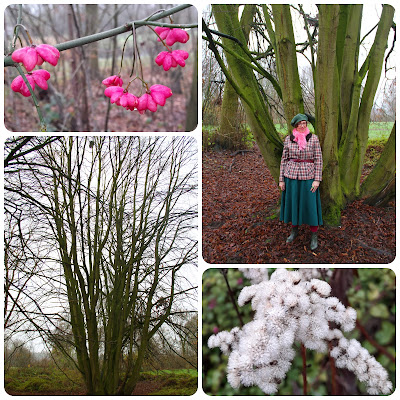 Apart from the odd, tenacious hangers-on, most of the leaves had joined the thick layer carpeting the ground, leaving the trees gaunt and bare.
Pink winged Spindle berries (Euonymus europaeus) decked the shrub like festive bunting. I wonder if it flowered early this year, as legend has it that this signified an outbreak of the plague was on its way.
As a final hurrah, Goldenrod (Solidago) regaled us with clouds of fluffy snow-white seed heads. 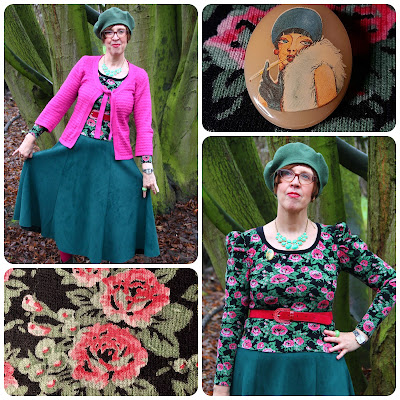 I was wearing last Summer's roses on my jumper, blowsy pink ones cavorting among a profusion of fresh green foliage.
The jumper is King Louie and was yet another charity shop find, as were the pink tie-neck cardigan and the cerise belt I'd added to accent my waist. Both my necklace and my brooch, on which a flapper lady is echoing my choice of headgear, were flea market finds. Only my skirt, in a super soft forest green faux suede, was bought brand new from Mango a couple of years ago. 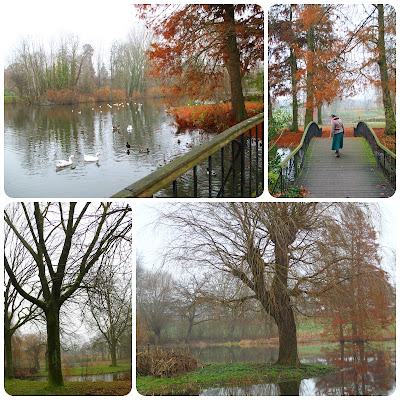 The drizzle had petered out by the time our photo session had finished, so we decided to walk towards the hump-backed bridge where the brook meets the pond.
Here, we were accosted by the customary gaggle of ducks and geese clamouring for a handout. Alas, we'd come ill-prepared and empty handed. The geese in particular were not amused and loudly honked their discontent. At the back of the pond, a flock of gulls was pretending they belonged in this landlocked part of the world. 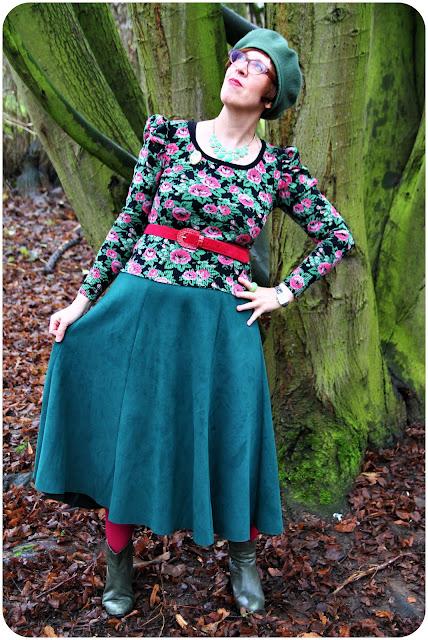 We'd come ill-prepared indeed.
As we ventured deeper into the park, negotiating muddy and waterlogged paths, it dawned on us that there was no turning back and that our photo session had turned into a walk. But not only was I wearing the most unsuitable footwear in the form of my bottle green wedge heeled ankle boots, we hadn't had the forethought of bringing our walking sticks, which were in the boot of our car! 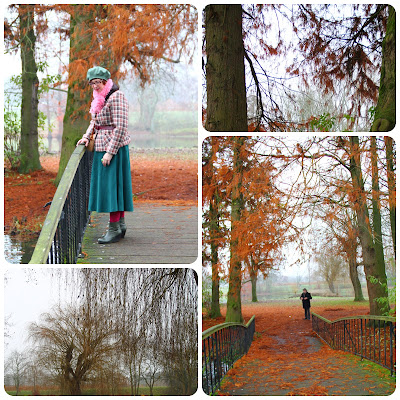 Beyond the pond, the world's edges were blurred by a bank of fog, cocooning the park and us, the sole explorers of the magical world it contained.
The bridge and the grassy field bordering the pond were glowing with the feathery, fiery foliage of Taxodium distichum, the bald cypress,  It was as if a flock of fairies had simultaneously cast a magic spell and conjured up this unexpected splash of colour in a world otherwise leached of it. 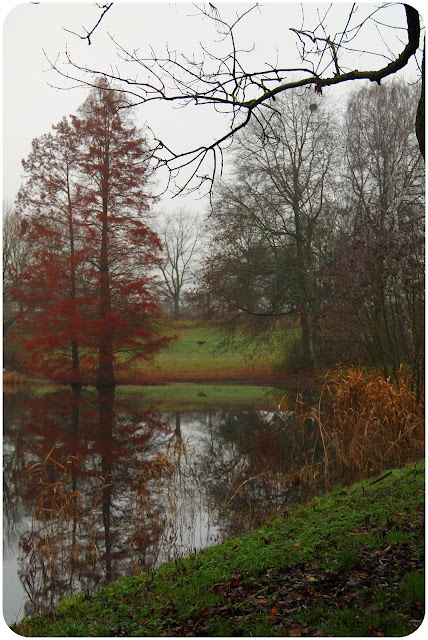 Rags of fog were caught in the branches of the trees, which looked forlorn and ghostly grey, their bleakness a sharp contrast to the odd one out which had stubbornly kept hold of its Autumn finery and was vainly preening itself in the mirror-like pond. 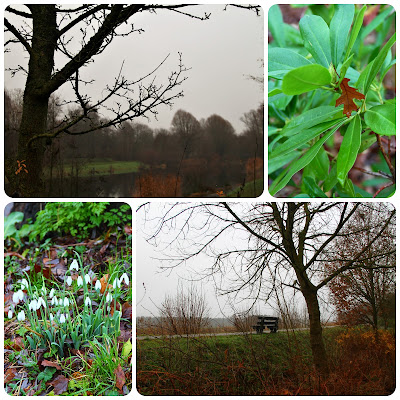 And yet, there were signs of a future Spring, with clumps of gently nodding Snowdrops and the fresh green foliage of some Hellebores which, as a rehearsal for their fat juicy buds, had caught a perfectly formed, coppery Oak leaf in their midst. 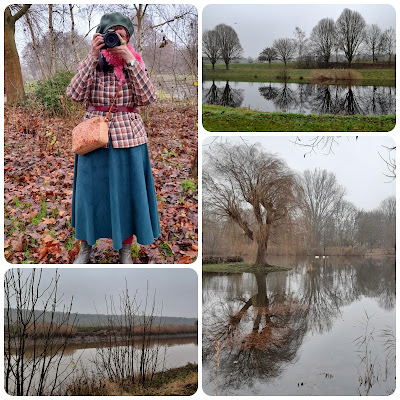 Not everything is black or white
Some things are lonely grey
Like windows looking out on rain at dusk
Or the bitter pain in winter skies
when all the birds are gone…’
~H. Joanne Hardee, from “Some Things Are Grey”
This atmospheric poem captured the mood of the day and those which would follow perfectly. 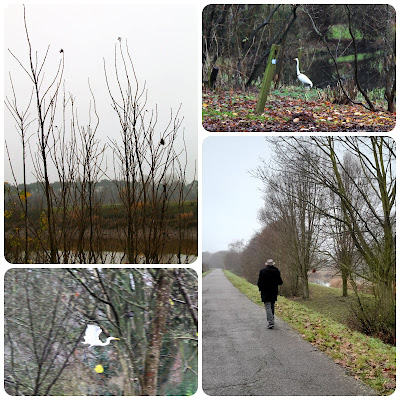 From the park, we climbed to the towpath which runs paralell to it, the river a colourless ribbon running towards the horizon.
We spotted a white heron, but it had spotted us too and took flight, the blur caught by my camera a cross between ghost and angel. 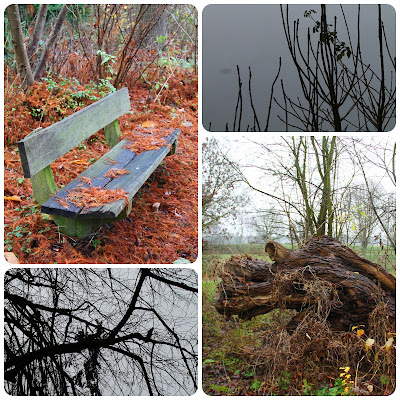 Back in the park, we passed the bench we often use for picnics. Judging from the knee-deep carpet of fiery leaves and the haphazard heaps left on its seat, the last ones to have had their sandwiches here were those spell-casting fairies before they fled for the imaginary monsters in the undergrowth. 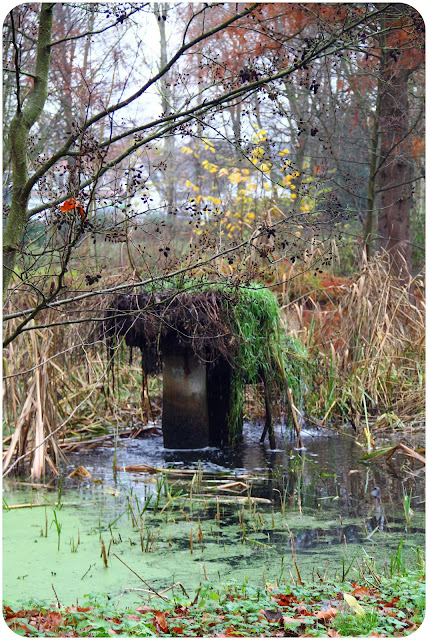 Perhaps they were still hiding in the wreckage of the water feature taken over by nature and neglect?
And so, we have come to the end of our walk, and the end of yet another year.
Pandemic or not, there are still things to be thankful for. If the year got off on the wrong foot by having to say goodbye to Phoebe in February, welcoming Bess in March has more than made up for this. 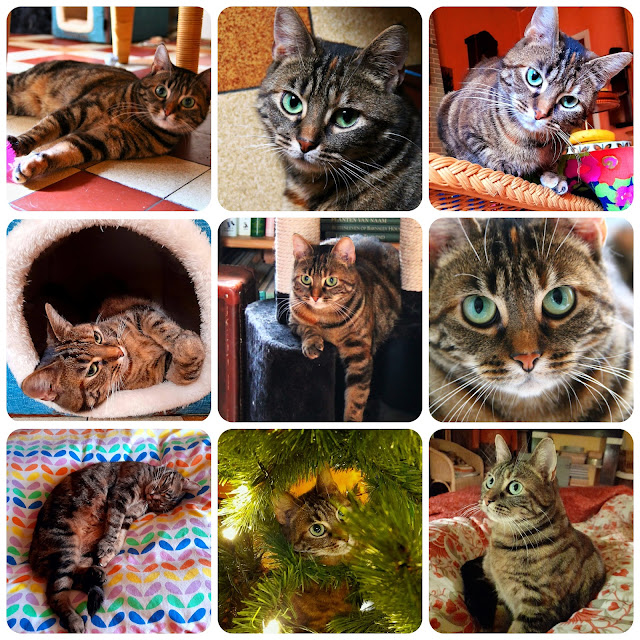