In these endless days of leaden skies and steady downpours, we have to make do with small mercies  which we'd better grab with both hands.

Initially grey and rainy, it looked as if it was about to clear up in the early afternoon of December's first Sunday. This was duly confirmed by our weather app, which claimed that the rainclouds would be taking a breather for a couple of hours.

Tired of being cooped up inside the house, we grabbed our coats and stepped outside, where all that unaccustomed fresh air instantly rushed to our heads.

However, with only a small and all but perfectly formed park within walking distance, any cobweb clearing outings involve a short drive at the very least. So, our first task was to pick up our car from our rented garage about 400 metres or so from Dove Cottage. 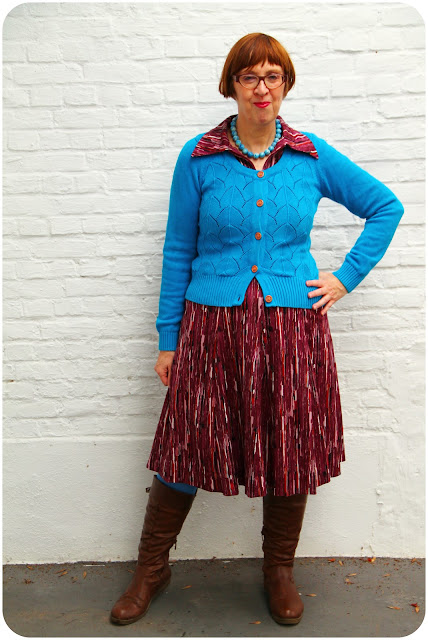 While our car has got a garage box all of its own, there's a communal parking area as well. Offhandedly referred to as our photo studio, it's here that the white-painted brick wall we're using as a backdrop for outfit photos can be found.
My dress, with its glorious mix of abstract stripes on an burgundy background, is an old Think Twice find acquired pre-blog on a Friday afternoon shopping trip with my friend Inez. I remember falling in love with two dresses that day and ultimately settling for the other one as it came with its original belt. Needless to say, I soon regretted not buying this one too and went back for it on Monday. 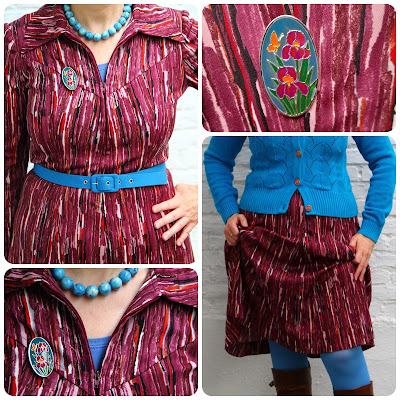 Although it does not feature any blue in its stripes, it turns out to be the colour I most often accessorize it with. As the temperature had dropped to 5°C by now, I layered a blue t-shirt underneath, and wore a chunky blue cardigan on top. With its fan-like ajour pattern and orange buttons it is one of my collection of cardigans by retro label Zoë Loveborn, the majority if not all of which were charity shopped.
The fabric belt belongs to another dress, but turned out to be the exact shade of blue I was after. The mottled blue beaded necklace came from a long-gone vintage shop and, if I remember correctly, the enamelled brooch with its purple bearded Irises and cheerful yellow butterfly was a flea market find. 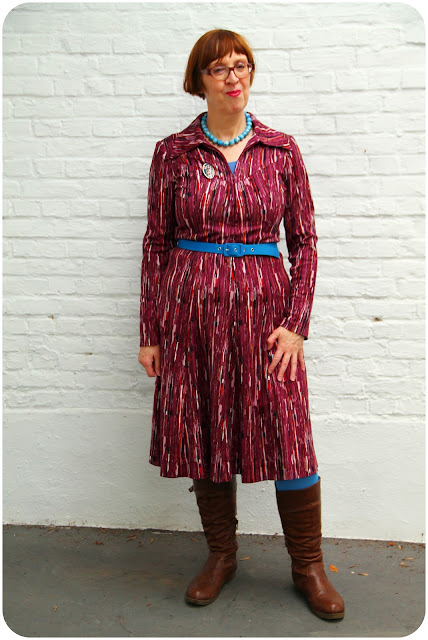 You can catch a fleeting glimpse of my opaques, which I happened to have in a matching shade of blue. Finally I donned my chocolate brown walking boots, as due to the incessant rain we expected things to be fairly waterlogged and to be faced with lots of mud.
In fact, it was the latter that ultimately decided our destination as it ruled out any of the local ex-clay pit nature reserves, where the mud would have consisted of sticky clay. By the time we'd finished taking photos and were ready to go, it briefly looked as if that weather app had got it wrong after all, as clouds were blanketing the sky once more.
Indeed, it was an almost black and white landscape which was waiting for us when we stepped out of our car after our ten-minute drive to the castle domain in the next village.
Walking up the cobbled linden avenue towards the castle beckoning like a white beamed beacon in the distance, I can never help but think of my Dad, whose playground this was when he grew up here. 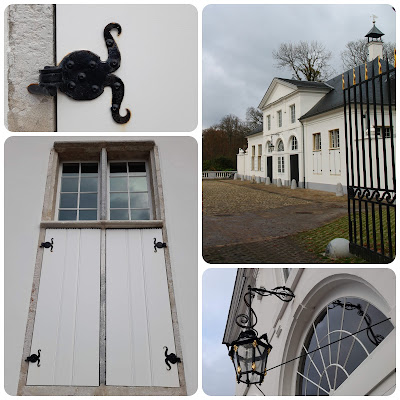 A rather illicit playground, I should add, as the castle as well as its gardens and parkland, which lay beyond the magnificent black wrought iron gate with its coat of arms and gilded finials, were obviously out of bounds for small semi-feral boys.
Not that this deterred them as, judging from my Dad's wartime childhood stories, they knew the grounds and those of the adjacent, equally forbidden fort, like the backs of their hands.
More black and white awaited us at the tastefully restored coach houses flanking the courtyard beyond the gate, now invitingly open to the public after the castle's last occupant died in 2011 and the domain was sold to the village council and Nature Conservation in 2012. 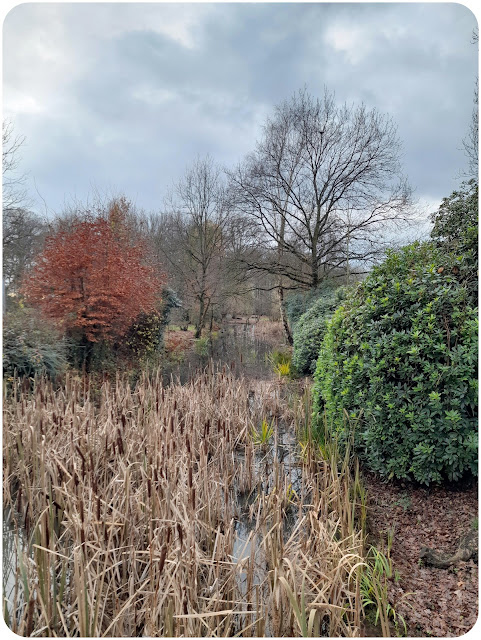 The cobbled courtyard ends at a painted bluestone balustrade with a central bridge crossing a moat and ultimately leading towards the castle itself.
Leaning over the balustrade, a leftward glance revealed a grayscale landscape stretched out beyond the reed-filled moat. Most of the deciduous trees had shed the last of their leaves, some of them conspicuously displaying last Spring's bird nests. The last of Autumn's russets and yellows provided some colour, as did the bank of evergreen Rhododendron bordering the castle side of the moat. 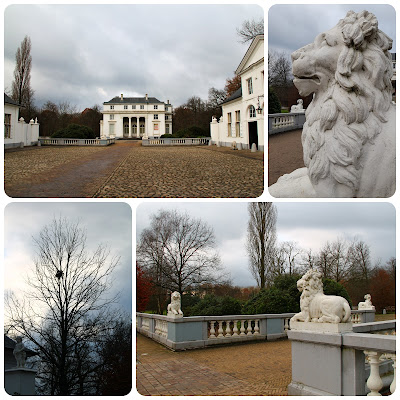 Stoical stone lions have been guarding the bridge across the moat since the castle was built in the 1770s, and I'm sure they could tell a story or two. Perhaps they even turned a blind eye to my Dad's mischievous adventures, although somehow I doubt that he and his friends ever ventured this close to the castle.
What I'm absolutely certain of is that they and the haughty sphinxes guarding the castle side of the bridge have watched the castle's decline with weary and worrying eyes. 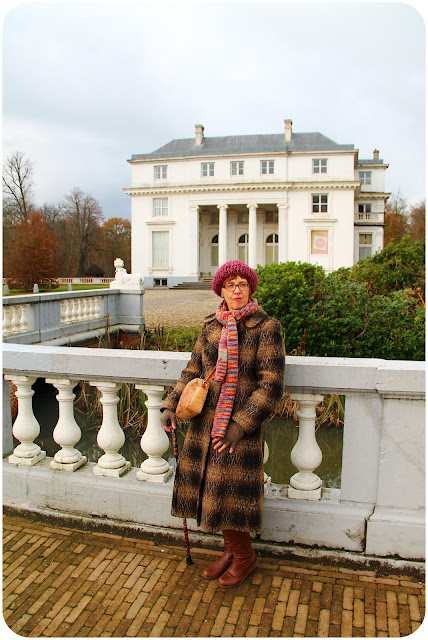 Before crossing the bridge and taking a closer look at the castle, we took advantage of this photo opportunity to show you my warm Winter coat in alternating shades of brown and fudge. This was another Think Twice find, as was my burgundy woolly hat. My scarf, with its multicoloured stripes, was supplied by the charity shops. 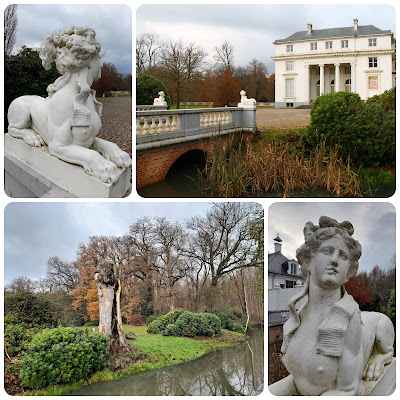 While from afar the dazzling white castle still looks like the lavishly iced cake I once likened it to, its crumbling and decaying state seems to have become worse with each visit.
It is currently being used as an event location, and it just beggars belief that its ultimate restoration keeps getting postponed. Judging from the company's website, the castle remains available for events until the end of 2022, so it seems that its well-needed refurbishment won't be on the cards for next year either. 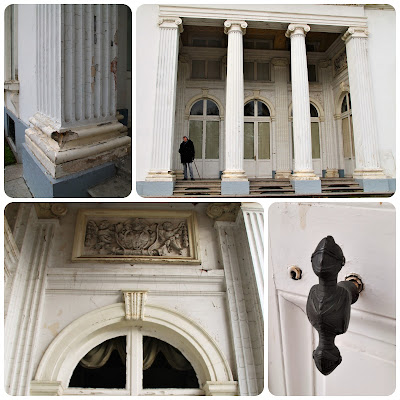 One can only hope that it won't be too late by the time the council finally gets around to it.
While the castle's website boasts of the wide range of beautiful halls and authentic castle rooms, time, tide and neglect have conspired in creating a sad case of rotting and crumbling woodwork. The castle's icing is cracked and honeycombed, and I'm sure the roof will have sprung a leak or two. Even the semi-circular bluestone steps leading down from the shuttered French doors at the back have subsided in places, lying in wait to trip up any unsuspecting ghosts from the past. 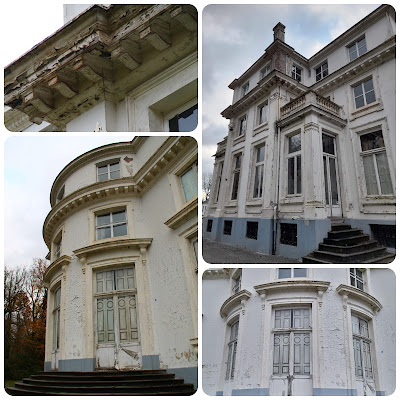 The steps lead down to a gravelled terrace with a panoramic view over the beautiful castle lake now filled to the brim as a result of the incessant rainfall.
It used to be a different story altogether, as back in the Summer of 2018 the lake's water level was at such a critically low level that a group of worried villagers had been making plans to rescue the resident fish. 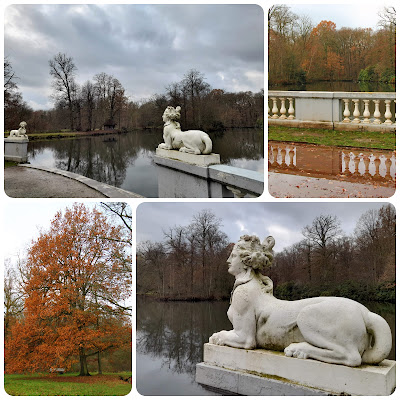 If you look closely at the photo on the top left, you might spot the thatched Summer house which was built on a small peninsula across the lake. Like the coach houses, this too has been restored, only for vandals to smash its windows and deface its interior with graffiti soon after it was finished.
Again, the tales those sphinxes could tell! I'm sure they are pining for their glory days, when crinolined ladies were being rowed to the thatched Summer house for secret rendez-vous. 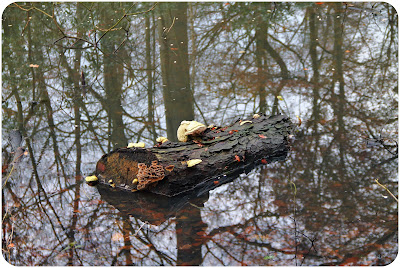 We walked on the slippery paths circling the lake, glad of our walking sticks to keep our balance on the carpet of rain infused leaves or to test the water level of the marshy grassland whenever we needed to circumnavigate the flooded paths. 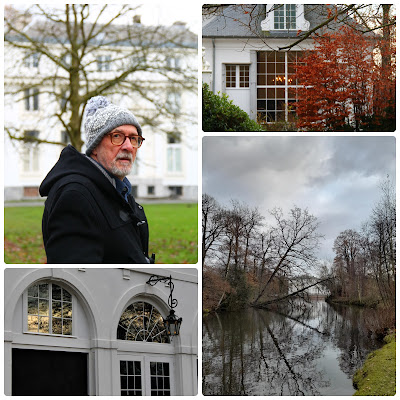 The view of the castle from the top of the lake is always a sight to behold. From here, it is looking particularly fairy-tale like, meeting its reflection in the placid water of the lake.
Although it was only just gone four o'clock when we arrived back at the courtyard, the Winter-low sun was already making its descent into dusk, the golden hues of the sunset reflecting in the coach house windows. 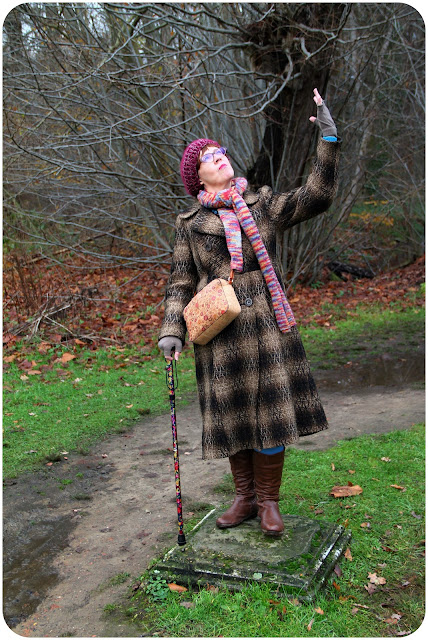 Time to call it a day and go home ... but not before performing my duty as a statue, replacing one of those which had once been placed at regular intervals around the lake.
Not sure what those lions and sphinxes must have thought of my efforts ...
Posted by Polyester Princess at 18:57