A tiny slice of normal life

Although the month of October certainly had its fair share of sunny days, the weather gods weren't averse to sending solid grey skies and rainy all-dayers our way.

Case in point was this very weekend, when daylight was sparse and the rain kept coming down in buckets.

Seeing me posed here against the white brick wall, you'd be forgiven for thinking that we were once again reduced to taking outfit photos in our garage, if it weren't for the sizeable amount of Autumn leaves gathered at my feet. 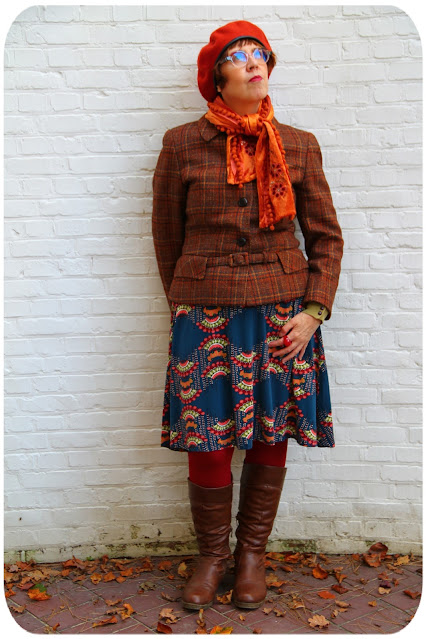 It was Saturday, the 16th of October - aargh, that's two weeks ago already! - and in continuation of my previous post, which ended on the Friday, I still had to tell you all about what we'd been up to during the rest of that weekend.
For starters, it wasn't one of those rainy days which kept us hostage at home. On the contrary, it was an utterly gorgeous one, the minor clouds we'd woken up to soon dispersing and leaving a bright sunny day in their wake. 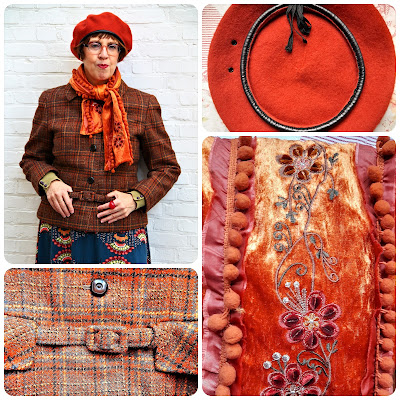 We only got highs of about 15°C, though, so dressing up warmly for our intended walk was a necessity.
My plaid jacket in delicious Autumnal hues was a Think Twice find in February 2018. It's belted quite low on the hips and the belt loops are hidden under the pocket flaps. which for once aren't just purely decorative, they are actual pockets!
To further combat the chill, I wore a burnt orange, flower appliquéd crushed velvet scarf and an orange beret, both of which were old charity shop finds. 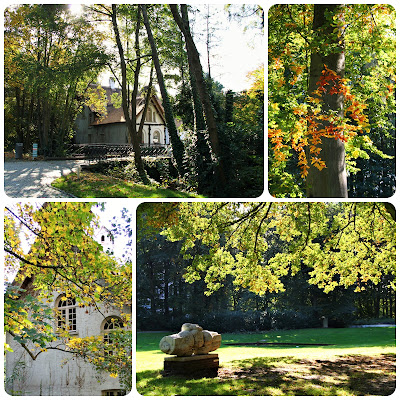 As we realized we hadn't been there since June, our walk took us to our beloved Middelheim Sculpture Park, where the emerging Autumn colours and its unmistakable scents added an extra dimension to the works of art on display.
If the seasonal sensory delights were making me feel quite giddy and - if only mentally - jump for joy, I was in good company. The Mad Maiden (or in Flemish, Het Zotte Geweld) by Belgian artist Rik Wouters, has been dancing her giddy dance since 1912. Modelled by his wife Nel, the inspiration for this sculpture was a performance by the American dancer, Isadora Duncan. 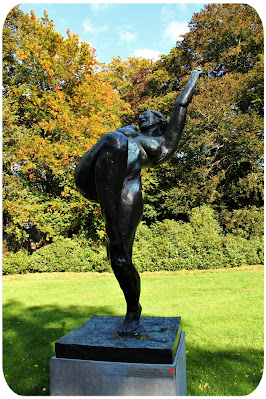 In spite of this being a sunny Saturday, there weren't all too many people about, so that we could wander and meander at will and have some close encounters with the art. We never pass up the opportunity to contemplate Antony Gormley's Firmament III (top and bottom left), which - and I'm quoting the museum guide here - offers a constant invitation to visitors to think about our place in the bigger order of things. Dotted around the park are silver and gold painted chairs for visitors to use at will. We marvelled at the artfully displayed Autumn leave on this particular one, wondering if nature did have a helping hand here. 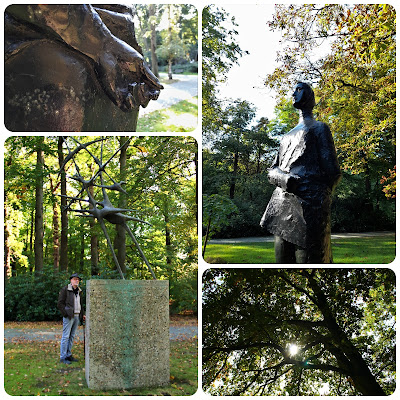 Having visited the park countless times before - after all, it is a mere 15 minute drive from Dove Cottage - it is only natural that some of the sculptures have become like old friends. There's the enigmatic Tempest (1956) by Italian sculptor Carmelo Coppello (bottom left), which has featured a number of times on my blog. But however many times we roam the park's paths, there's always a sculpture that has previously escaped our attention. By Giacomo Manzù, also Italian, and dating from the same period, the sculpture on the top left and right is called She-Skater (1957). 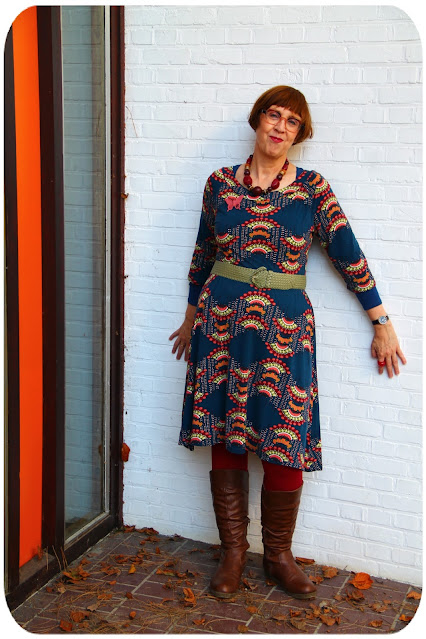 Regular readers might by now have deducted the origin of the white brick wall. Indeed, it belongs to the park's Organic Brutalist exhibition space, the stunning Braem Pavillion, designed by architect Renaat Braem and completed in 1971.
With no exhibition taking place inside, there was no access to the pavillion. At the same time, the absence of people coming and going created the perfect opportunity to show you what I was wearing underneath that jacket! 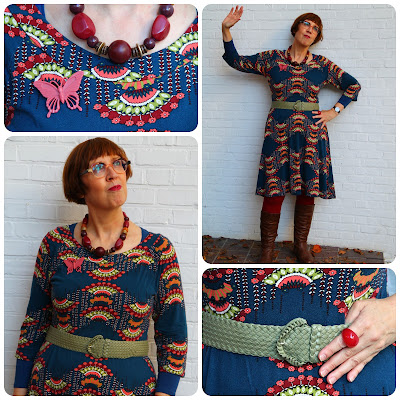 My long-sleeved cobalt blue dress with its striking  Art Deco style print is modern, a King Louie found at Oxfam back in June.
For its first wearing, I accessorized it with a sage green plastic woven belt, a pink butterfly brooch, a red perspex ring and a recently charity shopped necklace in shades of red and brown.
My outfit was completed by a pair of burgundy opaques and my chocolate brown walking boots. 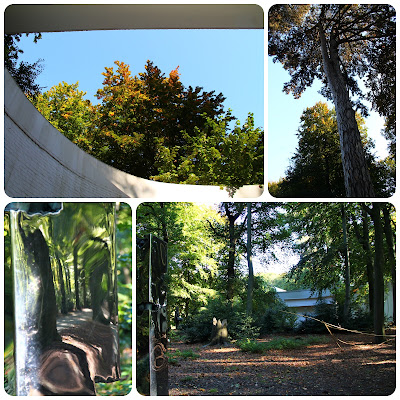 From the Braem Pavillion we made our way to another old favourite, the polished metal column (bottom left) by Belgian artist Felix Roulin (1975), its endless reflecting possibilities never failing to intrigue us. On the bottom right you can see its proximity to the pavillion. 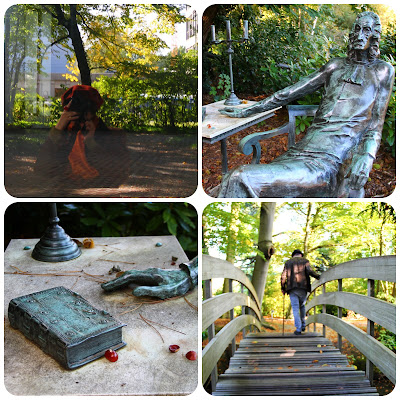 Crossing the Bridge Without a Name by Chinese artist Ai Weiwei, we paid a visit to the mad professor, a.k.a. Professeur (1969) by Hungarian sculpture Imre Varga (top right and bottom left).
From here, we had an excellent view of the museum café, noting with delight that there were a handful of empty tables, a most unusual sight on a sunny weekend afternoon. 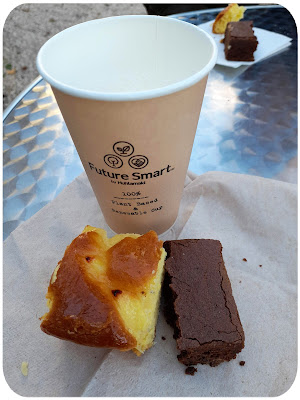 Our cappuccinos and shared pieces of apple cake and brownie have seldomly tasted this good as it almost felt like normal times again.
On our way back to the car, we took a different route and passed this installation representing the house of a traditional Congolese chieftain. 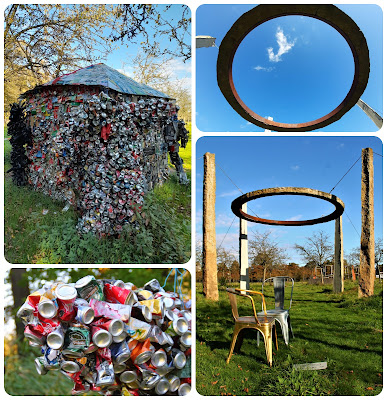 The Mokonzi’s house by the KinAct Collective (founded in Kinshasa in 2015) is built from the waste that the West dumps in Africa. This refers to the colonists who visited the chieftains in their homes bringing gifts (mirrors, alcohol or guns) in exchange for the rights to their land. Just as the waste today is toxic to people and the environment, the gifts offered then were also poisoned, and it's KinAct's intentions to re-enact the exchange. 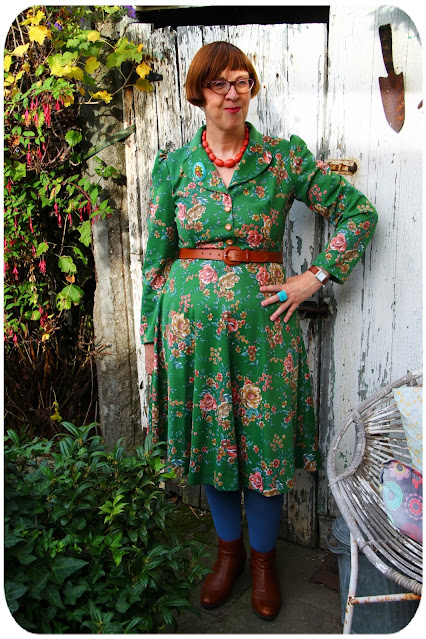 After this life-affirming Saturday, Sunday could have been quite a letdown. Except that it wasn't.
In fact, we were up early and eager to go. Go where, you might wonder, but I'll keep you in suspense just that little bit longer to show you what I was wearing.
With green being my favourite colour, choosing this dress for this momentous occasion was actually a no-brainer. Indeed, few of my dresses even come close to this glorious 1970s does 1940s one with its blowsy flower pattern. 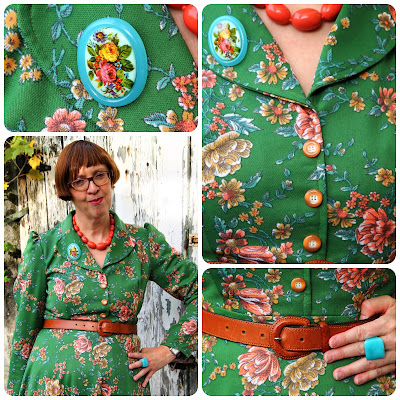 I added more flowers by way of my brooch, and paid tribute to the pattern's colours by adding a tan leather belt, orange beaded necklace and blue ring and opaques. Finally, I added easy flat-heeled ankle boots into the equation as we had a lot of ground to cover.
After a 19-month hiatus due to you-know-what, it was finally time for our favourite monthly indoor flea market to start up again. Apart from the obvious reason for this period of drought, for the last six months or so the venue had been roped in as a vaccination centre, which finally closed its doors and moved to smaller premises end of September. 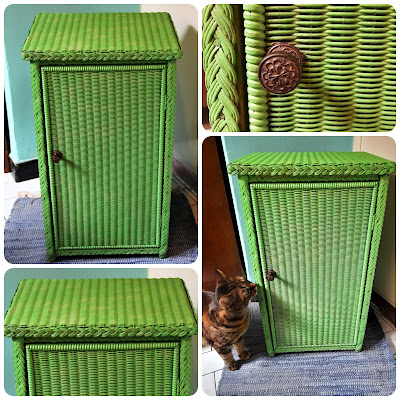 Going back after all this time felt simultaneously strange and familiar. It was as if my eyes couldn't focus faced with stall after stall of possible treasures, and I have to admit that it took some time to get into my stride.
I told Jos I would only be persuaded to buy things which made my heart beat faster, and it most definitely did when I spotted this vintage Lloyd Loom style cabinet. It was our final find, but as we had two more aisles to go, we paid for it and asked the stallholder to put it aside until we were done.
The cabinet now graces our hallway, where it is roped in to hold shopping bags, Jos's man bag and a couple of folding umbrellas. As you can see, it has been Bess-approved! 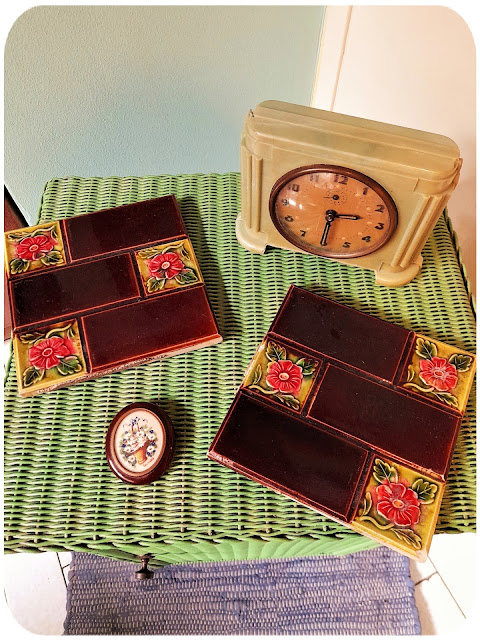 Our first buy was the pale green Art Deco alarm clock, made in some kind of early plastic, which we were happy to find is still in full working order.
The tiles were € 1 each and although we haven't figured out what we'll do with them, we spent € 6 on the lot, including 3 slightly damaged ones which the seller - a lovely 80+ year old lady - threw in for free. 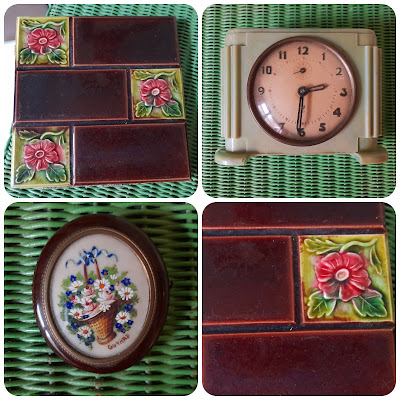 I was very restrained and only bought one brooch. Not just any old brooch though, this one consists of  a hand-painted basket of flowers contained within a galalithe frame.
I was tempted by others, obviously, but wasn't prepared to pay the often exorbitant asking prices.
All in all, not bad at all for our first foray into flea marketing ...
That's it from me for now, but I can't possibly leave without a Bess update, can I? 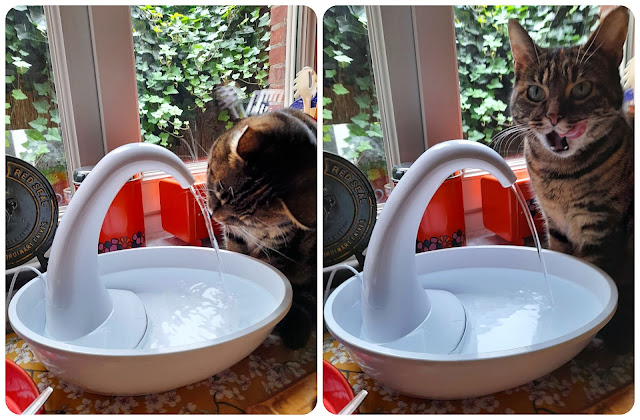 Remember her fascination with the kitchen tap? Well, some googling revealed the existence of a tap-shaped drinking fountain and, what's more, I found out that the wonderful Katshop, which is just a stone's throw from my office, was selling them.
Guess what I did during Monday's lunchbreak and guess who's now got her very own perpetual tap?
Here lives a very spoiled cat indeed!
Posted by Polyester Princess at 18:53