The sun had been hiding behind a blanket of grey all morning on September's final Sunday, which felt strangely at odds with the 20°C indicated by the thermometer.

I'd been making a half-hearted attempt at starting my seasonal wardrobe changeover, but so far I had only switched sandals for ankle boots. The task felt quite beyond me so I sighed and gave up, thinking there would be gloomier and thus far more suited days ahead to get on with this cumbersome job.

Sometimes I think my life would be a lot easier without my mega-maximalist wardrobe, but what would be the fun in that, I wonder. 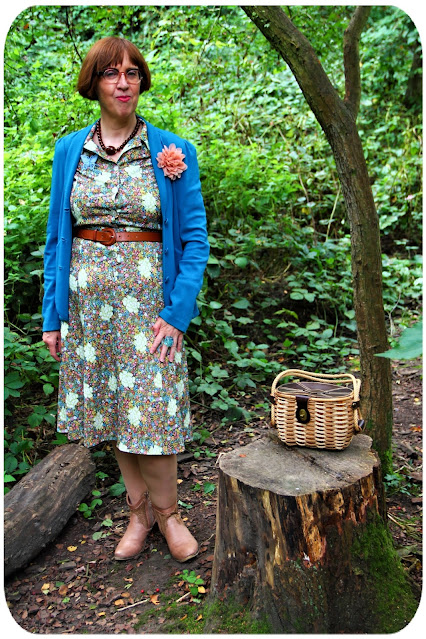 Days like these, when I can't seem to settle to anything, often seem to occur on a Sunday. Quite without rhyme or reason, a melancholy mood takes hold of me and lingers if not taken in hand and pulled up by the root.
Sometimes, all it takes is going for a walk to chase the tangle of cobwebs away, so that is what we decided to do after lunch. 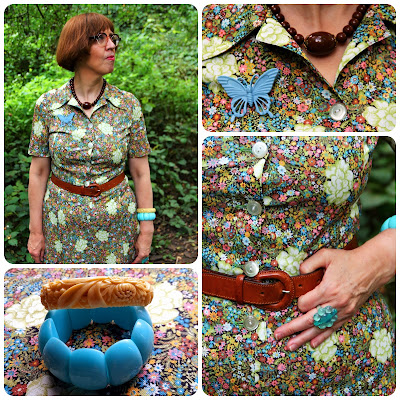 Still going through the dregs of my Summer wardrobe, I unearthed this short-sleeved vintage dress, its multi-hued millefiori pattern interspersed with blowsy cream roses. My blue butterfly brooch felt quite at home in this meadowful of flowers!
I added a tan leather belt at my waist, while further accessories consisted of a chocolate brown beaded necklace, aqua flower ring, blue bracelet and - as the cherry on the cake - an ivory-coloured carved Bakelite bangle. 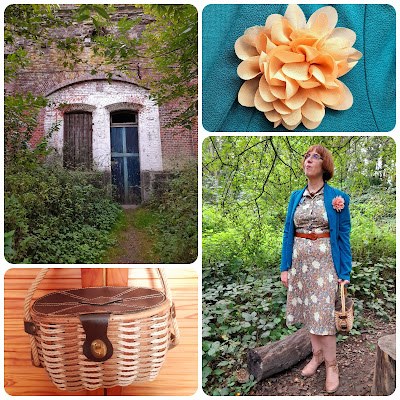 My blue jacket, in a crepey fabric, is charity shopped King Louie, to which I pinned a peachy flower corsage. Instead of taking the easy way out and grabbing my usual cork cross-body bag, I made the effort to dig out this leather-topped wicker basket which hadn't seen the light of day for well over a year. 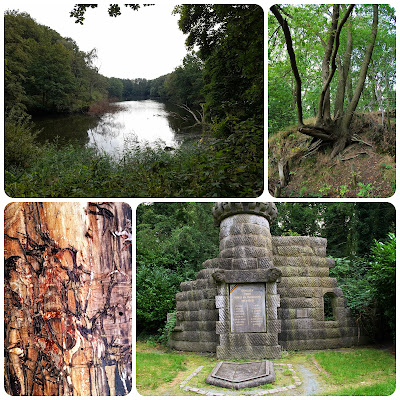 Our initial plan was to walk on a castle domain in the next village but alas we couldn't find a parking spot. Not wanting to admit defeat, we drove on to Fort 5, one of the old forts - dating from the 1860s -surrounding the city of Antwerp. Most of these have been converted to nature reserves and although this particular one actually links to the aforementioned castle domain, we were just aiming for a leisurely stroll around the fort and its moat.
The monument on the bottom right commemorates 16 Belgian resistance fighters who were executed at Fort 5 during the First World War. 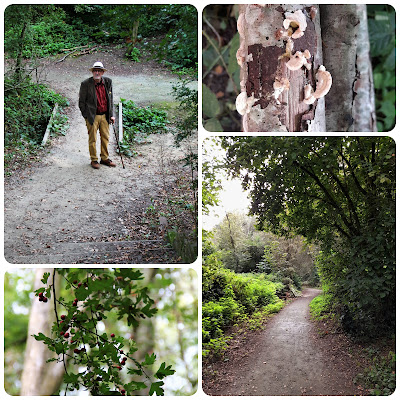 As always, it felt good to walk among nature, breathing in its sweet yet earthy fragrance, our eyes feasting on the trees and vegetation which were peppered with the first signs of Autumn.
There's a veil of melancholy here too, especially at this time of year. This used to be part of my Dad's playground when he was growing up in the village, and it's where his ashes have been laid to rest on All Saints' Day 2016. 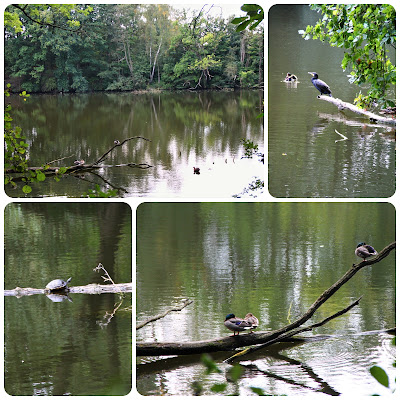 The dull grey sky was reflected in the gently rippling water where the usual gaggle of moorhens and ducks - not to mention the odd turtle - was joined by a majestic cormorant.
We hadn't been here since before Covid, and couldn't help but notice the signs of neglect and negligence with more than just a degree of sadness: the willow hurdles lining the path all but disintegrated, the graffiti which had mushroomed inside the accessible parts of the fort, and the mind-boggling amount of litter to be found everywhere we turned. 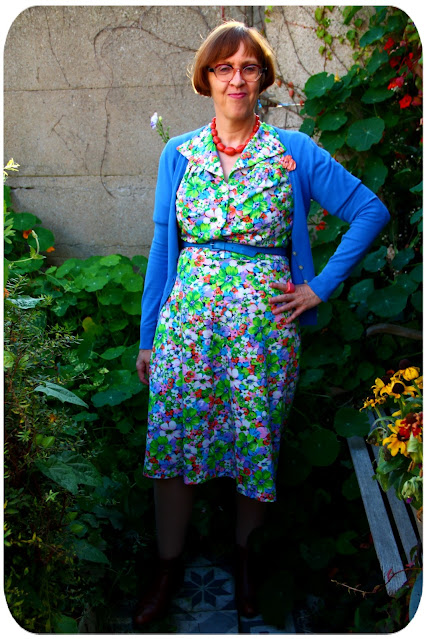 The weather forecast for the week ahead of us was looking pretty dire, with a drop in temperature and a more than usual amount of rain being definitely on the menu.
This wasn't immediately apparent on Monday and Tuesday, when the mercury kept flitting around the 20°C mark and the sun often managed to find a break in the clouds. 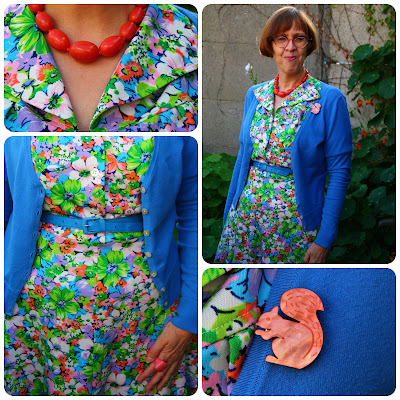 Determined to make the most of my Summer wardrobe while it lasted, I wore this 1970s does 1940s frock on Tuesday, a glorious floral Diolen which is among my favourites.
I picked two of the dress's multiple colours for my accessories: blue for my cardigan and belt, and orange for my necklace, ring and squirrel brooch. Isn't the latter a cutie? 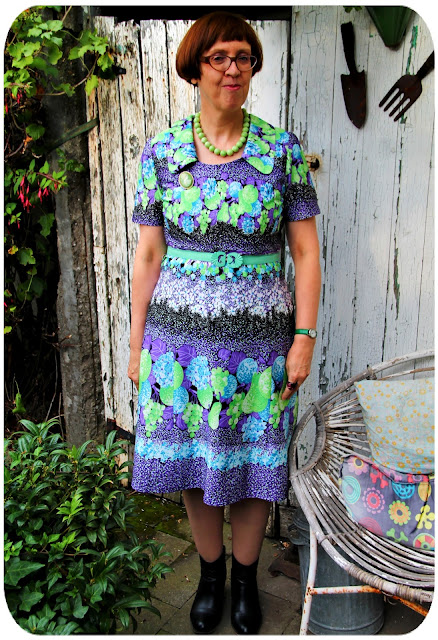 More clouds appeared on Wednesday, ominously threatening rain and erupting into a fierce thunderstorm while I was at the hairdresser's.
The temperature had plummeted to barely 15°C, but I still persevered with wearing my short-sleeved Summer frocks. Obviously, I was wearing a cardigan for most of the day, but I still had to put the heating on at the office to combat the chills. 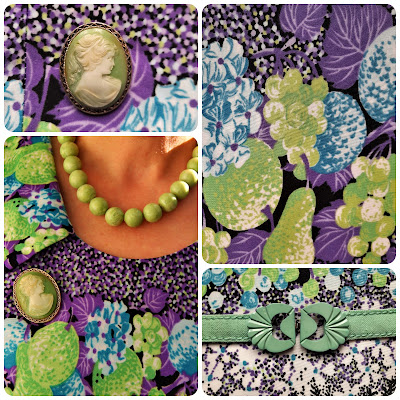 With the cornucopia of fruits among its pattern - I detect apples, pears and grapes - the dress speaks late Summer and early Autumn to me, which is why I often wear it at this time of year.
Green is my usual go-to colour for accessorizing the dress, so I added a beaded necklace, Cameo brooch and belt in my favourite colour. Note the belt, which used to belong to a vintage dress I never wore and was thus redonated. In fact, the thing that persuaded me to buy the dress in the first place was its gorgeous belt. The two parts of its buckle hook up together, and they are painted metal, not plastic. 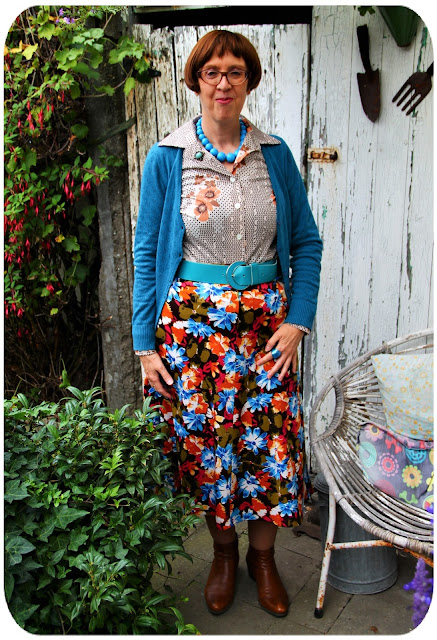 Thursday was another dismal day, with the mercury still stuck at 15°C, its only redeeming factor being the lack of rain.
As once again I would be sitting on my office chair for most of the day, I finally relented and opted for long sleeves in the form of this vintage blouse with its pattern of dots, squiggles and flowers.
More flowers appeared on my skirt, in delicious shades of burnt orange, blue, pink and fudge.
My teal King Louie cardigan - charity shopped, obviously - was worn on top. 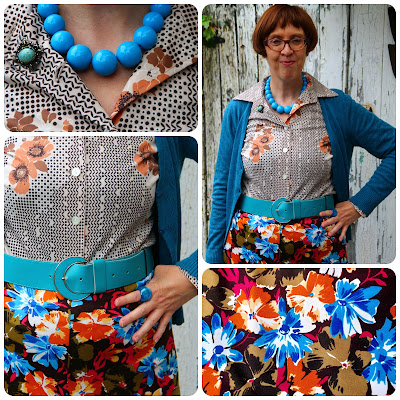 Various shades of blue were added with my belt, beaded necklace, ring and brooch.
Having noticed the decrepit state of some of my ankle boots, I was on the lookout for replacements, so I browsed some of the shoe shops on Antwerp's main shopping thoroughfare during lunch break. No luck, unfortunately, as those which weren't yawn-provokingly dull were much too high of heel. Oh well, it's not as if I haven't got footwear aplenty. 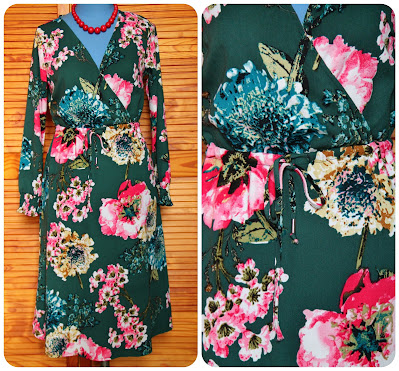 And so another working week had come to an end and we were once again ready to hit the charity shops on Friday the 1st of October.
As from that day, mask wearing was no longer mandatory in shops here in Belgium, and although we are still carrying masks in case it gets too busy, it was an absolute joy to browse without one's glasses constantly fogging up or feeling a bit disoriented as I usually do when wearing one.
The Oxfam shop in Wilrijk, which was our choice of destination that day, is quite spacious, and as there was only a handful of other shoppers present, I never felt anything but safe. 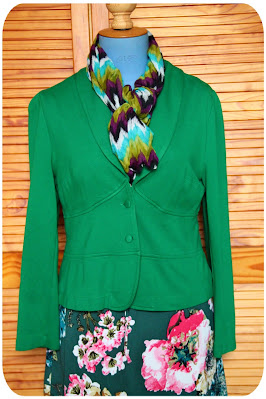 The charity shop goddesses must have been in a good mood too that day, as my finds were plenty.
And green!
The dress with its massive flower print is a 34, which is several sizes smaller than my usual size, and one which normally I wouldn't be able to fit into in a million years. Having recently found another dress by the same brand, I was aware of the fact that their sizes seem to run quite large, so I went by sight and indeed it fit me perfectly.
The green jacket is King Louie, and a size L, while I would usually go for a medium. Still, it fits perfectly, which just goes to show how off sizes can often be. 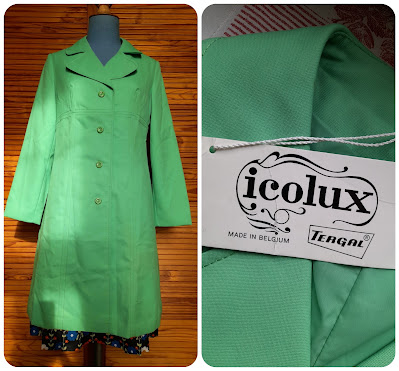 I couldn't believe my luck when I spotted this green vintage raincoat and squealed with joy when it turned out to be my size. And that was before I discovered its tag, and a spare button in one of its pockets. 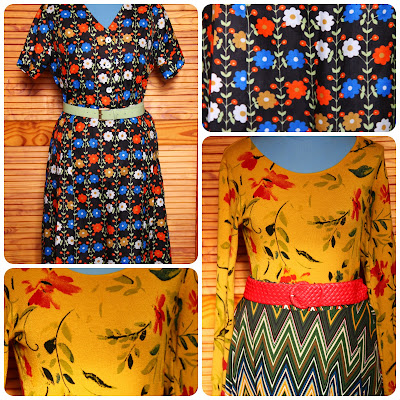 My final finds were a handmade vintage black floral frock, which will go straight into the linen chest - where I store my out-of-season clothes - after its spin in the washing machine, to be rediscovered next Spring.
The yellow flower and leaf patterned jumper won't have to wait that long to make its debut on the blog!
And with that, we've come to the end of this post. I'll be back with more in a couple of days. See you next time!
Posted by Polyester Princess at 19:16