We've made it halfway through October by now, and Autumn is in full swing. As capricious as April with its eponymous showers, the former's fresh Spring greens replaced by a palette of yellows, russets and browns.

Just like her Spring sister, October can be glorious, but we're on a slippery slope when she deals us a hand of dark rainy days. 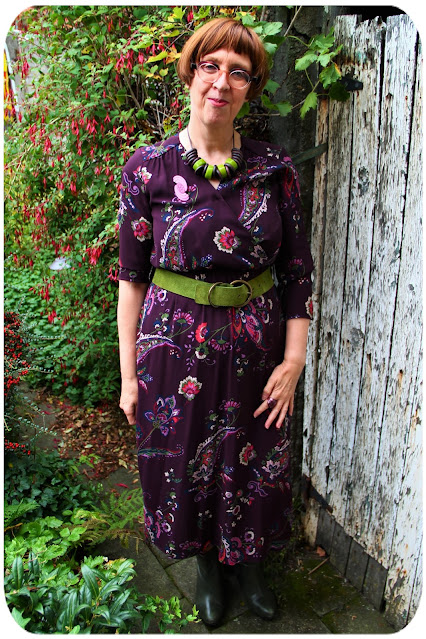 True to form, my blog is lagging behind, so I'm continuing where I left off at the end of my last post, on Friday the 1st of October.
While I did tell you all about that day's Oxfam haul - well, not quite all of it, but we will get to that later - I was yet to show you what I was wearing that day, so why don't we start with that?
Although it was a bit of a dismal day, with on and off rain, the temperature reached highs of 17°C, which was mild enough for this lightweight midi dress in a yummy shade of aubergine. 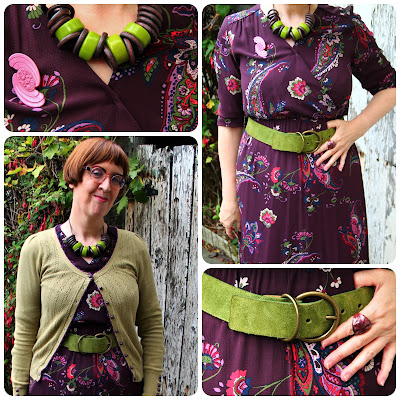 With its multi-hued Paisley-esque pattern, it was a lucky find in the January sales back in 2019. I took the lead from the greens and pinks in its pattern for my accessories, which included a moss green belt and necklace and a pink carved celluloid brooch. My ring echoes the dress's main colour.
On top, I wore a purple trimmed cardigan in an impossible to photograph shade of olive green, which is much more vibrant in real life. The glare of the sun, when she eventually made an appearance, wasn't any help here, and additionally made my face look quite ghostly. 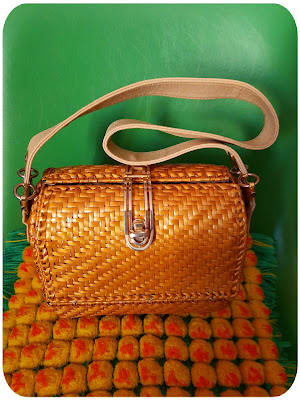 In my haste to finish my previous post, I forgot to photograph this lacquered wicker handbag, which joined my collection of basket-style bags after I found it winking at me from a shelf near the fitting rooms.
My reading pile also got a bit bigger after these three books followed me home. Not sure yet which one will be my next read if I ever finish the 592-page Elizabeth Gilbert, which has become quite a chore. 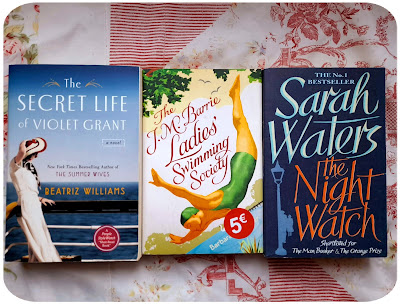 Flush with our many treasures, we drove home and had lunch, after which we had some errands to run. These included a visit to our edge-of-town branch of C&A, as Jos was in need of a couple of pairs of trousers.
Time to show you my outerwear, which consisted of an olive green cord jacket - again, looking paler that it actually is - and an aubergine embroidered crushed velvet scarf, picked up for € 0,50 at a flea market many years ago. 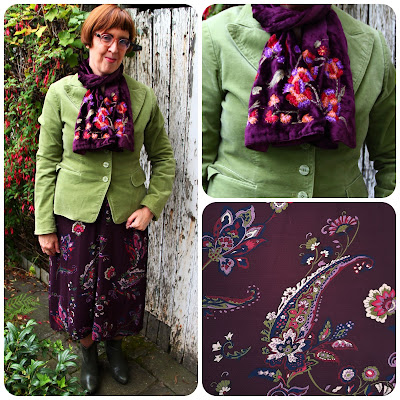 Trouser buying mission accomplished, we were wandering around the shop on our way to the till, when Jos spotted these ankle boots, which were exactly the thing I was looking for! 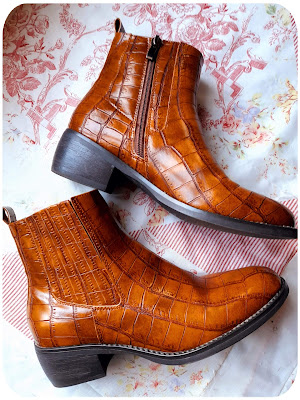 Back home again, the sky had turned a uniform shade of non-descript grey, against which the tower crane at the building site across the road stood out starkly.
Its arm is acting like a giant weather vane and if the wind comes from the wrong direction, it towers over our garden, as well as several of our next door neighbours'.
It has become a meeting point for a parliament of rooks of late, their raucous cawing competing vigorously with the weekday noise of the construction equipment! 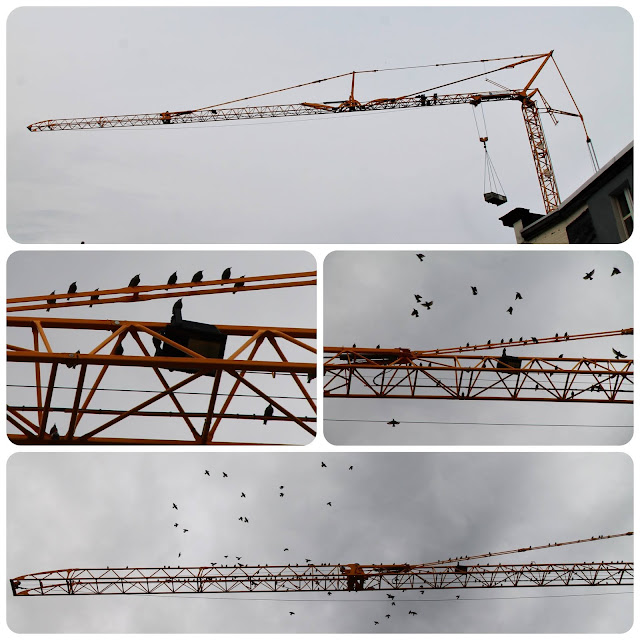 Rain had been forecasted from the afternoon onward on Saturday the 2nd of October, so we made the most of the dry, clear and at times sunny morning to make outfit photos before the heavens opened.
I felt the need to wear Autumnal, yet cheerful, colours, but before I'm taking you through the details of my outfit, I'm sure you'll have noticed I was wearing my spanking new footwear! 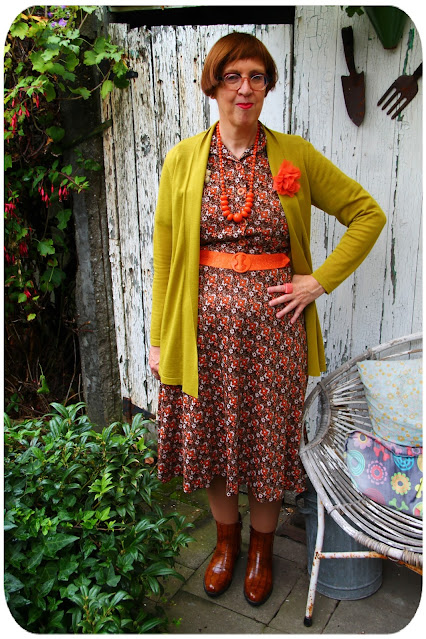 My dress is a short-sleeved one, although you have to take my word for it. For some reason, I never thought to remove my thin long-line chartreuse cardigan.  In a polyester knit, the dress was more than adequate to deal with the day's 17°C on its own.

I piled on citrussy orange accessories: a long necklace, a belt belonging to a different dress and a flower corsage pinned to my cardigan. A cream vintage flower brooch adorned the dress itself. 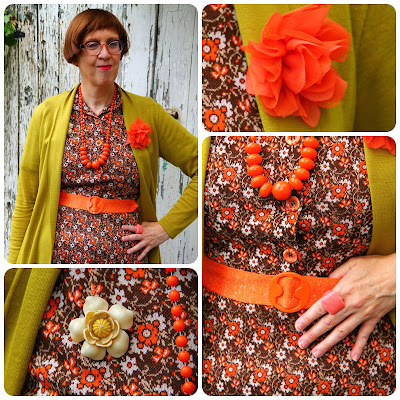 My efforts to compete with the Autumnal exuberance of our garden were clearly in vain!
The long-suffering Cotoneaster - one of the garden's inherited inhabitants - is displaying its yearly fireworks of fiery red berries, their colour echoed by the first of the changing Virginia creeper leaves.
Vibrant pink is represented by the Hydrangeas in their final blush and the magenta flower heads of Sedum spectabile.
And then there are the pops of orange from the seemingly invincible Nasturtiums! 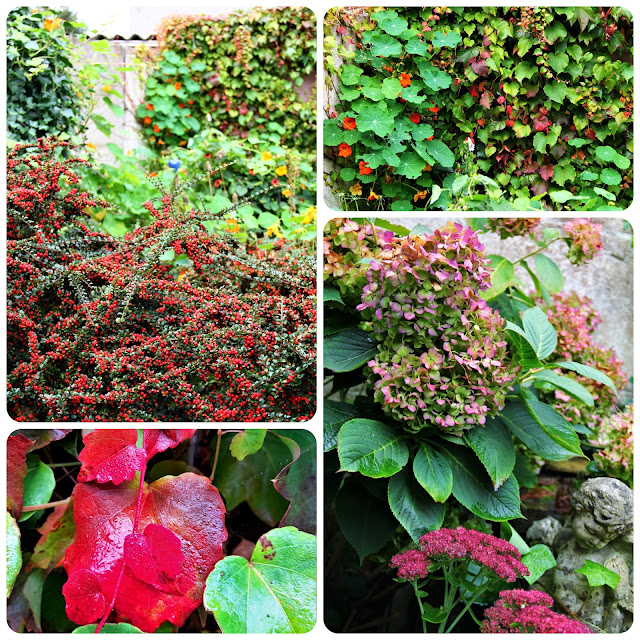 With the weather in non-stop rain mode from late afternoon on Saturday until mid-afternoon on Sunday, it was the perfect opportunity to continue with the daunting task of my seasonal wardrobe changeover.
I made a start with my main wardrobe, folding away my Spring and Summer frocks and putting them to sleep inside the vacuum bags recently vacated by my Autumn and Winter ones. I've still got the Real Winter Weather stuff to do - thank you Monica for this moniker - but that'll be for a later date. And then there are the skirts, shoes and coats to tackle as well ... 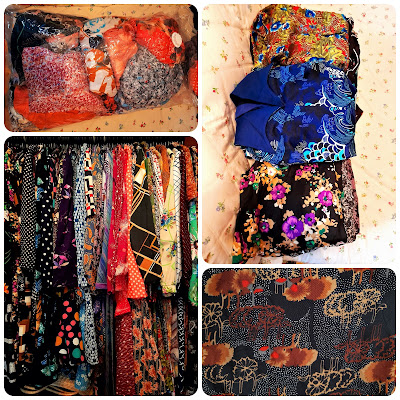 I'm usually taking this biannual opportunity to weed out the things I'm no longer enamoured with, and I filled a bag of donations and another one for my flea market stock, which made me feel rather proud of myself. I even repaired the separated zipper of the dress whose pattern you can see on the bottom right. 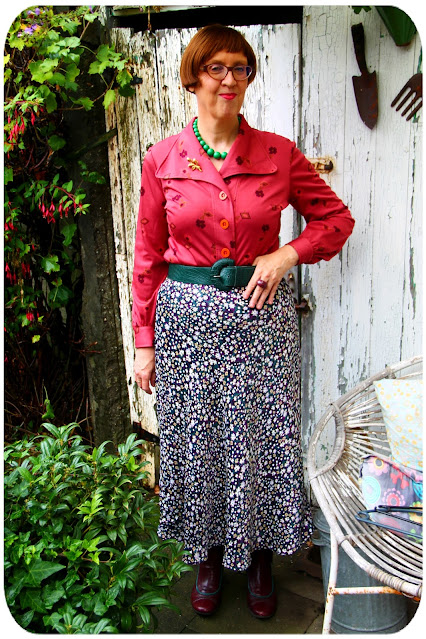 This is what I was wearing on Sunday. After it had finally stopped raining, we just managed to take photos before the light started to fade.

My recently charity shopped floral maxi skirt was joined by a vintage blouse bought from a long-gone shop. I fell hard for its rosewood colour, naive flower print, orange buttons and large wing collar, to which I pinned a vintage pearly posy of flowers brooch. 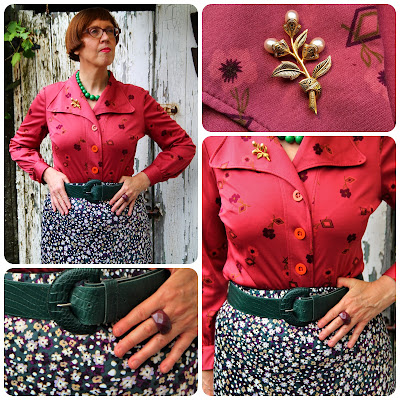 The week ahead of us would be a mostly gloomy one, during which we didn't even manage to take outfit photos once. You didn't miss much, as I did rewear versions of Friday's and Saturday's outfit. I also gave the dress with the newly repaired zipper a go. Sadly, when I unzipped it at night, the zipper separated again. It's now currently awaiting its faith. Perhaps I'll have a go at replacing it myself ... 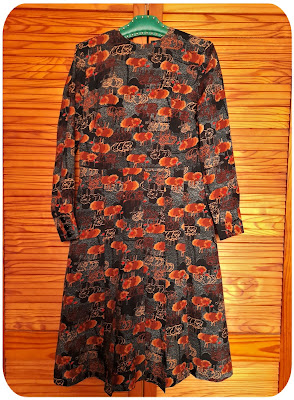 Tuesday the 4th of October was World Animal Day, so I thought it was only fitting to include another Bess update. She is becoming ever more confident, continues being inquisitive and is, of course, utterly spoiled.
Her latest tricks include waking us up in the middle of the night by continuously scratching the duvet. Ignoring her doesn't help, so that there's nothing for it but to ban her from the bedroom. She also likes rearranging the rugs and is totally obsessed with the kitchen faucet! 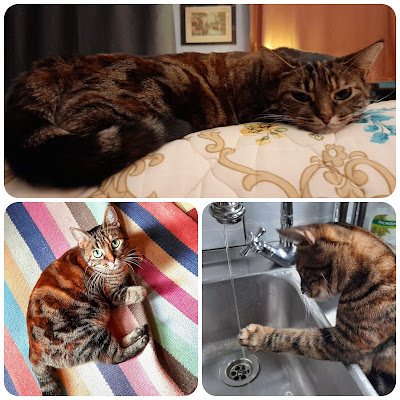 Weather permitting, I've been indulging in what Sheila aptly calls Mental Health Shopping during my lunch breaks.
Always on the lookout for interesting skirts, I couldn't resist buying the fudge coloured button through cord one from a high street shop, while a rummage at Think Twice yielded the black, daisy patterned one. You'll get to see me wearing the cord skirt in my next post, and I'm happy to report it'll definitely be a keeper! 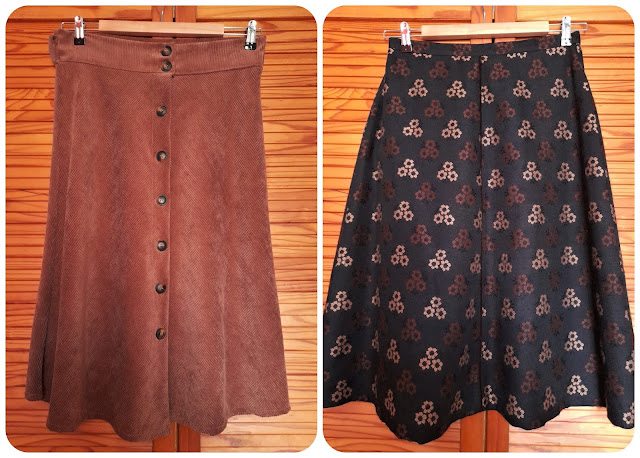 Well, that's it for now.
As we were blessed with a couple of gorgeously sunny Autumn days in the ensuing weekend, I'll be taking you on a couple of walks in my next post. Will you join me? 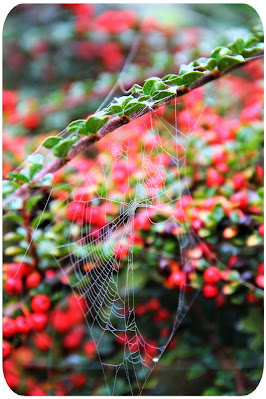 Posted by Polyester Princess at 19:02