Five years, what a surprise

If the last couple of weeks have been a bit of an emotional rollercoaster, they have been quite hectic as well, with this and that, and the increase of my workload at the office in particular. So much so that I'll be working an additional day a week from now on, adding Friday to my repertoire of office days. After almost one year at a two-day regime, it's a bit of a shock to the system and I'm desperately dreading the not-so-far-off day when I'll have to return to the office full time.

With my head all over the place, it almost escaped my attention that today, the 5th of March, it has been an incredible 5 years since I hesitantly published my first blog post. But while I marked my first four blogiversaries with a retrospective post, I'll refrain from doing so this year.  As we all know, it has been an extraordinary year, to put it mildly, with more than its average quota of ups and downs. A strangely distorted year which has turned our lives inside out and upside down. I just don't need a reminder of all that.

That doesn't mean that it was all bad, though. I can't stress enough how much I relished all the free time I had at my disposal, which in its turn triggered the revival of our previously much neglected little garden, and the rediscovery of my green fingers in the process. 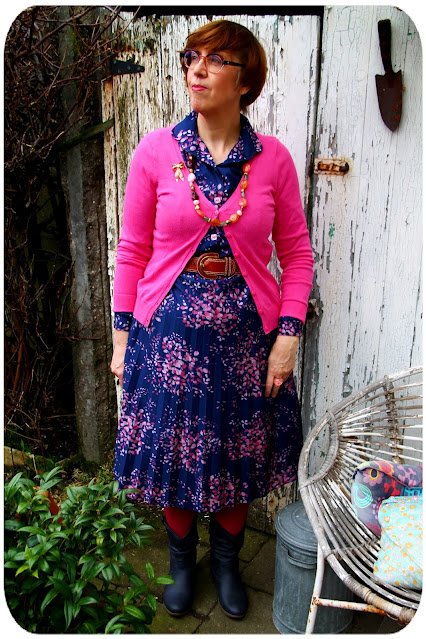 Apart from the gardening frenzy, I thoroughly enjoyed not having to rush in the mornings. I know I've said it more than once before, but being able to take my time to assemble outfits and accessorize them has been an absolute joy, stretching the limits of both my imagination and my wardrobe.
Meanwhile, my blog has arrived at the start of the third week of February. By Monday morning most of the snow had gone, with only the odd patch turned brown and marooned at the roadside.
That morning, it weren't the weather conditions but roadworks and diversions which thwarted the journey into Antwerp. Work itself was super busy, so I was especially thankful for Tuesday's respite, to be enjoyed while it lasts. 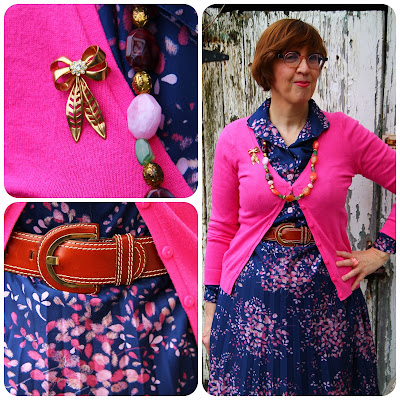 The blue pleated fit and flare dress with its sprays of pink-hued flowers was a Think Twice find back in November 2017. Once again, its original boring buttons were soon replaced by more suitable ones.

Accessorizing this dress is a no brainer and always involves copious quantities of pink, this time in the form of my opaques and cardigan. I usually add a pink-ish belt as well, but thinking outside the box I opted for a caramel brown one instead. 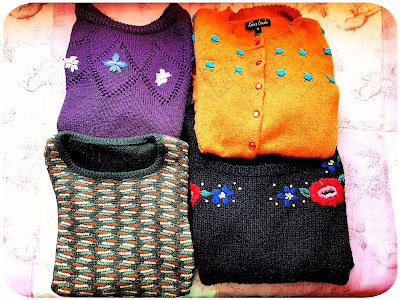 Now that the temperature had climbed to 10°C, I thought it safe to presume I wouldn't be needing my thick woollen jumpers again any time soon (although at the time of writing they are on the verge of plummeting towards freezing point once more), so they were washed on a gentle wool cycle and dried on the fold-out rack in our spare room. 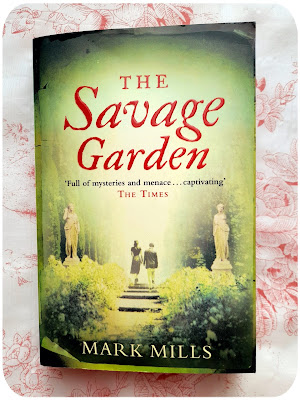 Consulting my journal, it seems I washed and dried my hair, uploaded the previous week's batch of photos and did a massive blog catch up. For some unfathomable reason, I keep getting behind with replying to comments, for which I herewith apologize.

The rest of the afternoon was spent reading The Savage Garden by Mark Mills, which I'd made a start on during the weekend. Set in the Tuscan hills, it is basically the story of two murders, four hundred years apart. Intriguing as this may sound, it was just a mildly enjoyable read. 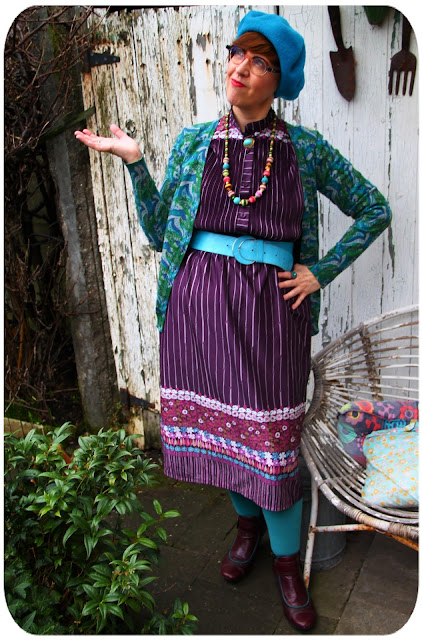 After Wednesday's moderately busy office day, yet another 4-day weekend rolled along.

Following a night full of weird and vivid dreams, I felt a bit off on Thursday morning, but that was soon repelled by a game of dress-up.

The dress that caught my attention that day was bought during a trip to Bruges in April 2019, when by pure coincidence our itinerary took us past the city's tiny Think Twice shop where, lo and behold, they were having one of their sales. 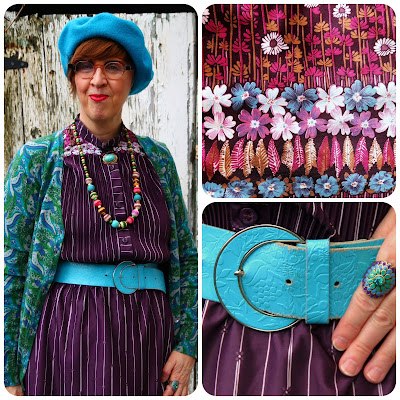 I took the lead from the blue flowers in its pattern for my accessories, which included a textured belt, brooch, opaques and beret. My ring combines blue with green and purple, while my necklace with its multi-coloured, crochet covered beads is making yet another appearance. 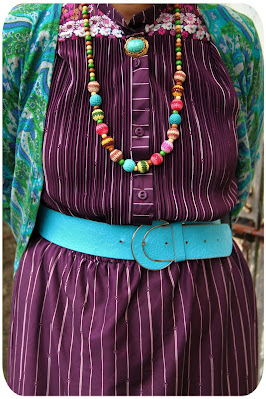 The dress's bodice is finely pleated, making it slightly stretchy. My only gripe with it is that it is a bit roomy on top, so I'm still on the fence whether it is a keeper or not.

The cardigan with its Paisley-esque green, blue and grey pattern is from the high street by way of a charity shop, and I have it in a burgundy, green and grey colourway as well.

Apparently, I was quite a busy bee that day, as not only did I vacuum the upstairs rooms, we deep cleaned some of our rugs, including the new-to-us one, and I finally got around to dusting the two bottom shelves of the camera cabinet. 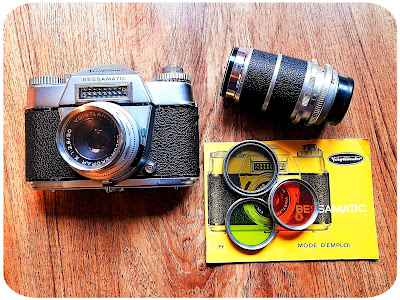 This camera, a Voigtlander Bessamatic, was Jos's first 35 mm camera, which he used in the first half of the 1970s. He bought the camera from a colleague, who in his turn got it from a friend, who was a professional newspaper photographer. 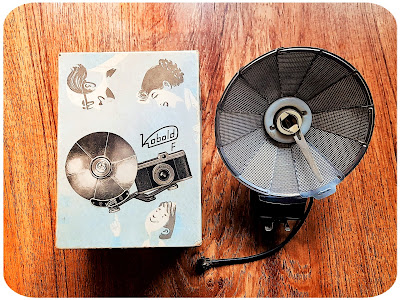 Neither of us remembers where we got this boxed Kobold camera flash, but it has been in our collection for many years. So far, we haven't been able to determine its exact date, but I suspect it's from the late 1950s or perhaps the early 1960s. 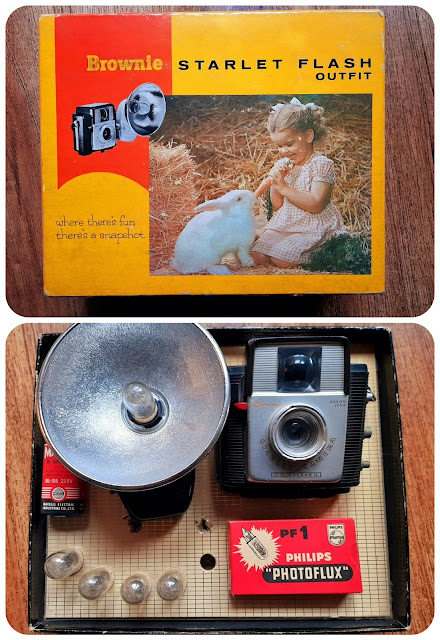 This late 1950s Kodak Brownie Starlet camera isn't making its debut on the blog, but I'm gladly telling you its story again, as it is one of the stars of our modest collection.

Jos found it, complete with its box containing flash unit and flashbulbs, in the waste disposal area in the communal basement of the block of flats we used to live in before we moved to Dove Cottage. 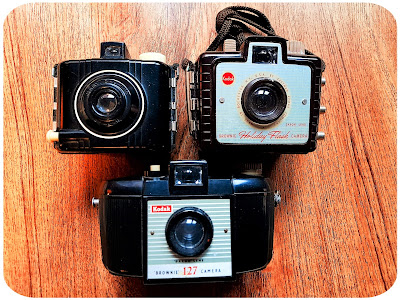 We've got several other Brownie cameras, two of which were found at our much missed favourite indoor flea market. Clockwise from top left are a tiny Baby Brownie, produced between 1938 and 1954, a Brownie "Holiday Flash" (1953-1962) and, finally, the second incarnation of the popular Brownie 127 camera, from 1959-63. 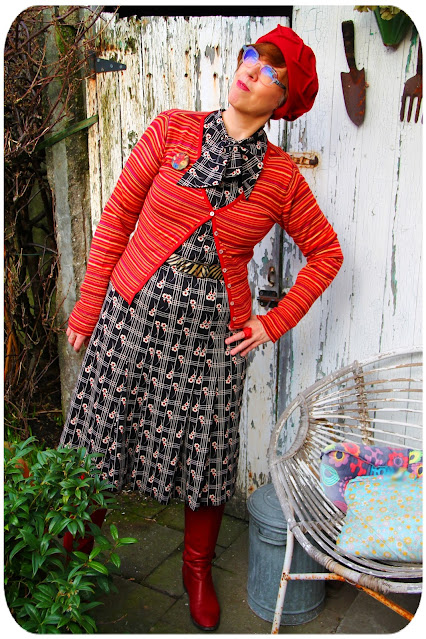 If Thursday had been quite miserable and grey, the day's only redemption being its temperature which climbed to 12°C, Friday saw a return of the sun. The weather was gearing up for the weekend, when Springlike temperatures had been forecasted.

This black based long-sleeved Crimplene dress, with its pussy bow, is one of my all time favourites. I'm always describing its pattern as a kind of trellis, against which an abundance of tiny, red-hearted, white flowers is growing.

For obvious reasons, I often veer towards red as its companion colour, although I have worn it with a white belt several times. Again thinking outside the box, I selected a zebra print belt - a retail sales bargain after the first lockdown - to wear at my waist. 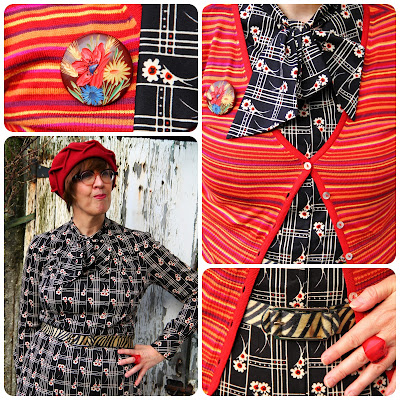 The belt was the only second-hand item in my outfit. The striped cardigan and red perspex ring were charity shopped, my red beret came from Think Twice and the vintage celluloid brooch - also one of my favourites - was a flea market find.
As mentioned in my previous post, Friday has become our weekly charity shopping day. Obviously, we will have to pick either Tuesday or Thursday instead now that I'm working Fridays again. 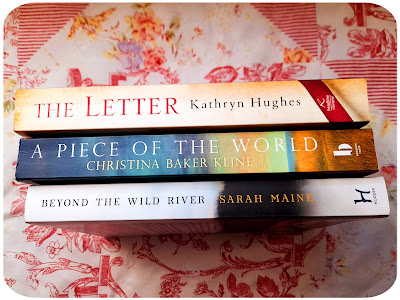 That particular Friday, the 19th of February, saw us visiting the pop-up charity shop in Lier again.

While Jos took a couple of bags of donations to the drop-off point at the back of the shop, I masked up, grabbed a compulsory trolley and went inside. Browsing the bookshelves, there were several which caught my attention - including some I'd donated myself. These three were added to my trolley. 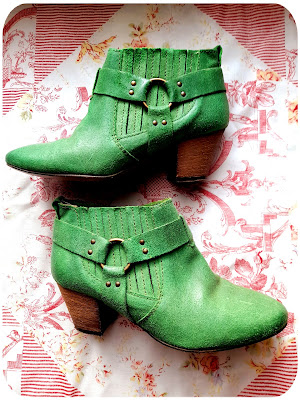 The clothing aisles were uninspiring, and I was about to give up and join the queue at the till when a flash of bright green entered my peripheral vision. Now, you know me and green. I just had to backtrack and investigate, and couldn't believe my eyes when that flash turned out to be the most gorgeous pair of green ankle boots ever! In my size! The rest, as they say, is history.

Well, that's it for now, my friends. I'll be back soon with my first post of my sixth year of blogging. Until then, I am counting on you to stay safe, sane and fabulous!