The stormy March has come at last

I'm not making a secret of the fact that life has been quite a rollercoaster in the last month and a half.

If Phoebe's unexpected departure from our lives wasn't enough, the increase of my workload hasn't been a walk in the park either, leaving me constantly stressed out even on my days off.

Having quite got used to my two-day working week during the better part of a year, it was a bit of a wrench to admit defeat in my struggle to get things done in the limited amount of time at my disposal. In the end, a 3-day working week isn't so bad either, although the on-off-on-off rhythm of working Mondays, Wednesdays and Fridays makes me feel somewhat disorientated and funnily enough does seem to make the weeks pass by at a slightly slower rate. 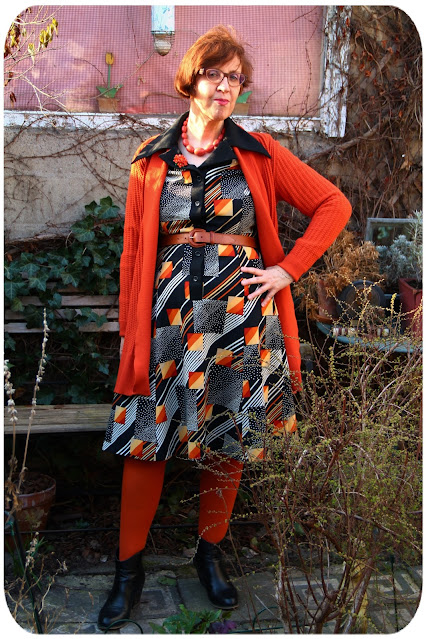 Enter a certain furry creature, who would enrich our lives and turn them upside down in equal measure.

During Bess's first night at Dove Cottage, she finally left the relative but uncomfortable safety of the back of her litter box and found a hiding place under our dining room cupboard, where she remained for two days, only coming out for the bare necessities when we weren't around.

I'm sure you can imagine our relief when, early on Sunday morning, we passed through the room on our way to the bathroom and spotted her in one of our dining chairs! 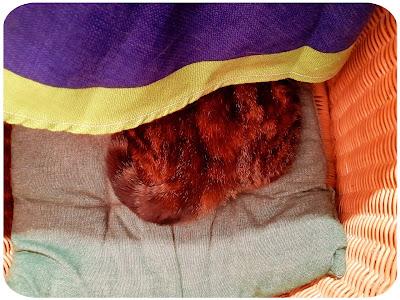 My blog, always running behind the facts, has now arrived on Sunday the 7th of March, which my journal tells me was a bright sunny day with highs of 7°C.
In spite of the gorgeous weather, my energy levels were low that day and, apart from some aimless pottering and catching up with blogland, it was largely spent curled up on the sofa with my book and the weekend paper's supplements. 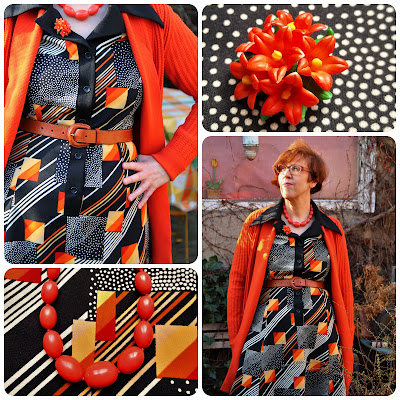 By the time we made it outside the garden was completely sun-drenched, and the glare of the otherwise welcome sunshine made taking outfit photos a challenge. It wasn't only tiredness which made me look so washed out!
My outfit of choice was based around a 1970s Swedish "Petri" dress, the orange in its riotous geometrical pattern prompting its companions and accessories.
Both the chunky knit long-line orange cardigan and the tan belt were charity shopped, while the floral brooch was a flea market find. My necklace is a holiday souvenir, bought from an antiques centre in Newcastle Emlyn, Wales in June 2017. The bright orange opaques and black ankle boots were both retail purchases. 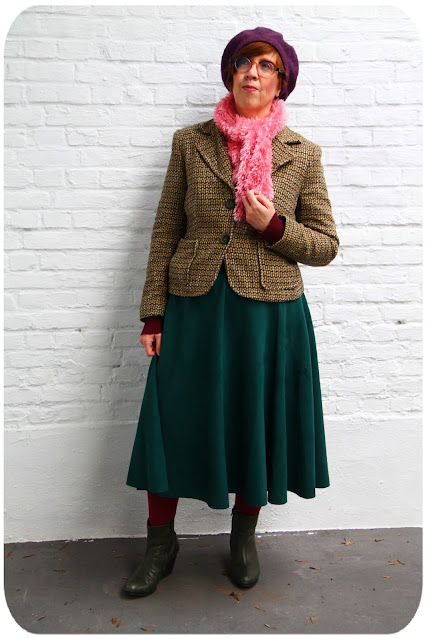 Although the latter have become increasingly rare over the years, I am the first to admit that I am not immune to succumbing to the lure of the high street once in a while. This was especially true when I roamed Antwerp's streets during my pre-Covid lunch breaks. It was on such an occasion that I stumbled upon this bottle green faux suede skirt when I happened to walk through Mango, which offered a short cut on my way to Think Twice. The skirt being one of my holy grails, I haven't regretted its purchase for one minute. 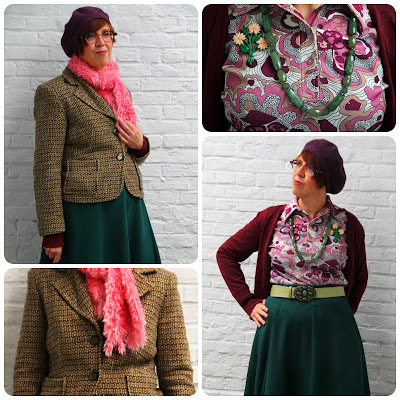 On Tuesday the 9th of March, I wore it accompanied by a sage green Tweed jacket, my sugar pink feather boa scarf, a purple mohair beret and a pair of moss green wedge a ankle boots.  In my defence - although surely there's no need to feel apologetic - these were all charity shop finds at one time or another. 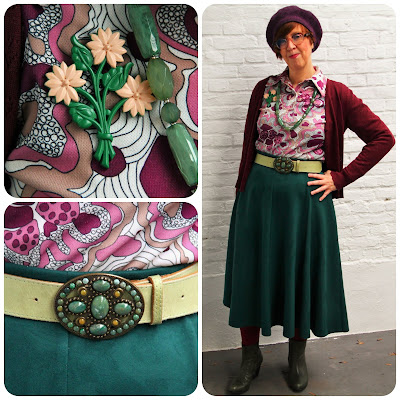 Underneath the jacket, the psychedelically patterned vintage blouse I charity shopped earlier this year received its very first outing. Both the burgundy King Louie cardigan and pale green suede belt with statement buckle were picked up from various charity shops as well.
The fern green necklace is from H&M, and has been in my collection for well over 10 years, while the pink and green flower posy brooch is from a small independent shop in Antwerp. 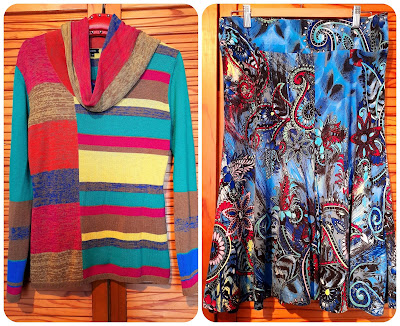 Not having been able to do any rummaging the preceding week, we were starting to get withdrawal symptoms so, after breakfast, we hopped into our car and drove to the charity shop in nearby Mortsel.
Much to our surprise, though, there was a queue at the shop's entrance, which prompted us to make a U-turn and stop at the charity shop at the outskirts of our hometown instead.
There, a quick trawl through the clothing aisles yielded a thin, cowl-necked, multi-coloured jumper by posh Belgian label Caroline Biss, and a blue crazily patterned skirt by the German Gerry Weber label. 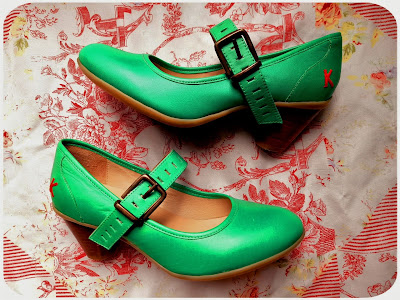 I wasn't going to look at shoes, but as this particular shop has them displayed on the bottom of the clothing rails, there was no way I could have missed these spanking new looking green (!) buckled Kicker shoes. They are size 36 (3) while I generally wear a 37 (4), but they fit, so I wasn't going to leave them at € 4,50. I've inserted vintage shoe stretchers for a couple of days to create some extra room. 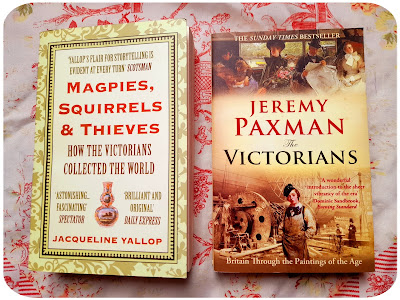 From the shop's book shelves, I plucked these two non-fiction books on one of our favourite subjects, the wonders of the Victorian age.

Magpies, Squirrels and Thieves tells the stories of some of the 19t century's most intriguing collectors, following their often perilous journeys across the globe in the hunt for rare and beautiful objects.

Jeremy Paxman's The Victorians explores the Victorian age using the paintings of the era as a starting point and accompanies his eponymous 2009 BBC series. 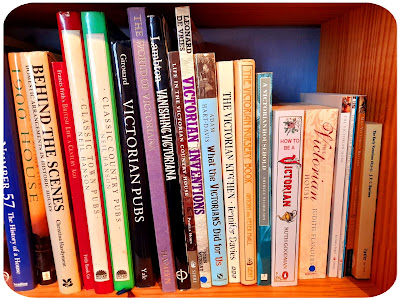 They are joining the rest of our books on the subject, nearly a shelf full of them, accidentally collected from charity shops and second hand book shops over the years.

Wind, rain and a bit of sunshine: we had it all that day, but it was the wind in particular that was prominent, as it was blowing a gale. Not even the mild temperature of 13°C was able to alleviate the overall unpleasantness of the day. 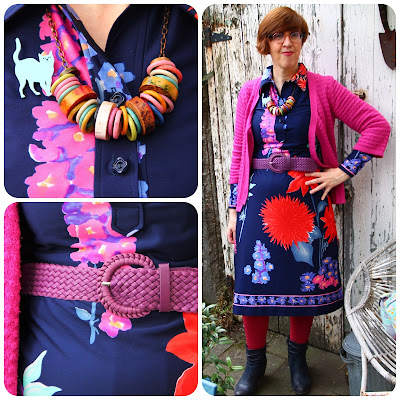 A Think Twice sales bargain from December 2019, this navy dress printed with an array of massive flowers, instantly made me think of Monica's famous massive flower skirt.

Although the red flower at the front of the dress is the most prominent, it were the pink bits in the pattern that I turned to for my tie-neck cardigan and opaques. There's purple in the pattern as well, a colour that I honoured by adding a woven belt in a similar shade. 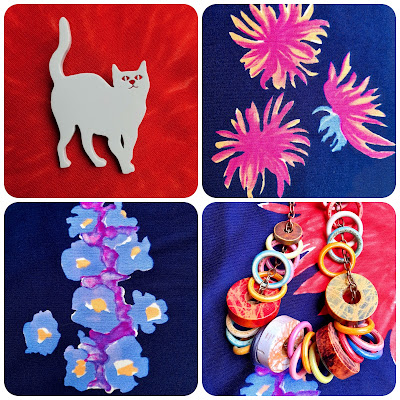 You've seen my necklace of wooden circles and rings many times before. It was bought from Accessorize who, for a brief period in the late noughties, used to have a shop in the Grand Bazar shopping centre a stone's throw from my office.

My cat brooch was bought in a shop selling all manner of cat related items which opened opposite my  hairdresser's last Summer. 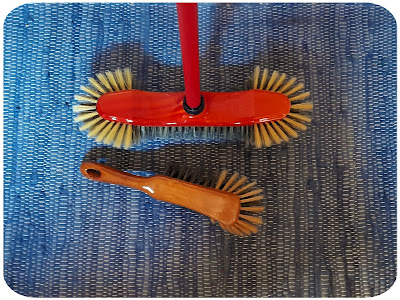 We had a couple of errands to run that day, including a visit to a local DIY store, as Jos needed some bits and bobs.

With the vacuum cleaner out of bounds in the dining room, where Bess currently resides, as well as the adjoining kitchen, we bought an old-fashioned wooden room sweeper and utility brush to keep those rooms dust - and cat hair - free.

Even after all those years, Phoebe still invariably fled when the vacuum cleaner came out, so we do not want to unduly upset Bess until she is properly settled in. 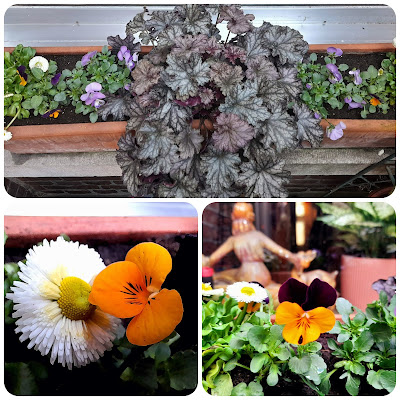 The wind slightly eased in the afternoon, and I planted up the window box at the end of the passageway next to the kitchen with orange-violet and lavender pansies and frilly white double Bellis perennis at either side of its permanent resident, Heuchera 'Can Can'.

There's still a table full of Spring colour to be planted out, but I'm waiting for a sunny Spring day to go ahead with this, as well as a long list of other gardening tasks. 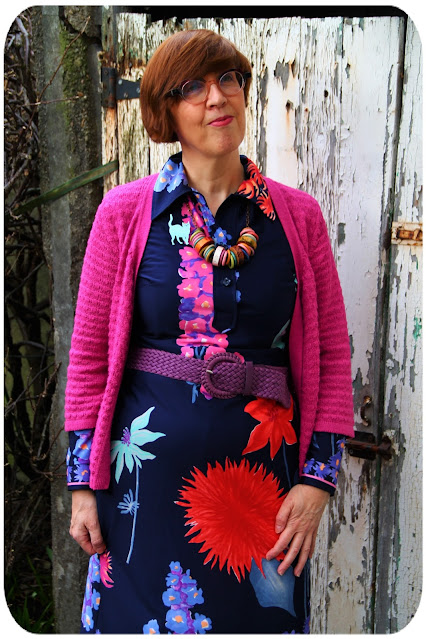 Hopefully, it won't be too long now for Spring to start in earnest.

I'm keeping my fingers crossed for a glorious April just like last year's, but bearing in mind that month's usual fickleness, I'm probably hoping against hope.

I am ending this post with the usual mantra to stay safe, sane and fabulous. See you next time!