Back to square one

As from tomorrow, Belgium will be in a sort of semi-lockdown again. In order to tackle the spike in infections, our authorities have initiated a four week "Easter Pause", ordering non-essential shops to operate by appointment only, closing contact professions such as hairdressers and closing down schools a week early in the run-up to the Easter holidays. Outdoor gatherings, which had been allowed in groups of up to 10 for the past two weeks, will now be limited to just four people again.

None of this will affect us very much - we only have to forego our weekly cherry picked charity shop rummages - but it remains to be seen if these half-measures will be sufficient to stop the virus in its tracks. With Belgium's so-called vaccination strategy little more than a farce - my colleague's 84-year old Mum finally received an invitation this week, only to be told there were no vaccines available -  all this will probably just be a drop in the ocean.

Whatever the case, it seems we are yet again back to square one, which feels quite disheartening.

One bright spark is that although I was supposed to go back to the hairdresser's on April 1, which would now be off the cards, I got a phonecall from him on Wednesday, offering me to reschedule to today! I could have hugged him, but obviously that is off the cards as well. At least, I won't have to worry about #Coronahair this time around! 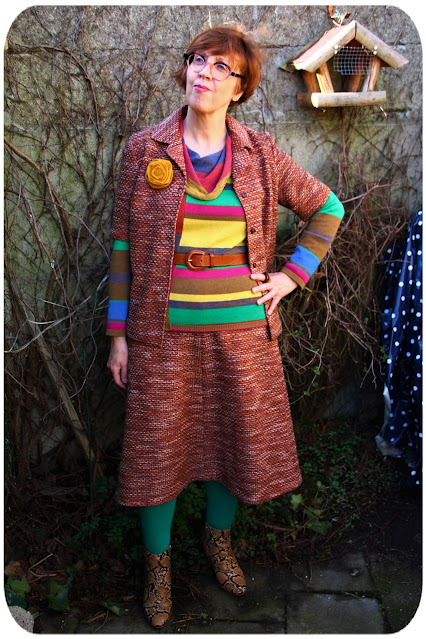 Returning to my blog's actual timeline, I'm taking you for a wee two-week backwards journey in the time machine, with a gentle landing on Saturday the 13th of March.
A mixture of sunshine and rain, often accompanied by lots of wind, was on the menu that day, the temperature not climbing higher than 10°C. The ideal weather, in fact, to give my recently charity shopped Caroline Biss cowl neck jumper its maiden outing.
I wore it over a rust coloured slubbed vintage St. Michael skirt, which came with a matching short-sleeved jacket. I don't think I've ever worn the two pieces together, but when I needed an extra layer to go outside into the garden, it turned out to be just perfect. 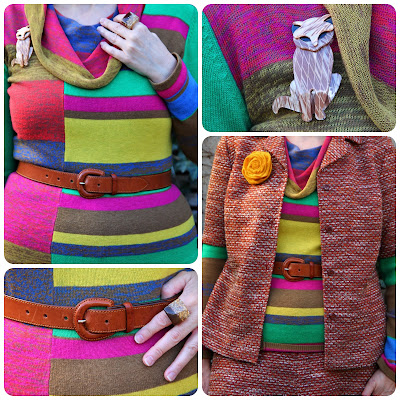 The suit has a self-fabric belt as well, which I'd initially wanted to belt my jumper with, but as my search for it was fruitless, I opted for a tan leather one instead.

The jumper was accessorized with a faux Lea Stein cat brooch, while I pinned a yellow felted flower corsage to the jacket.

My outfit was completed with green opaques and my fake snakeskin ankle boots. 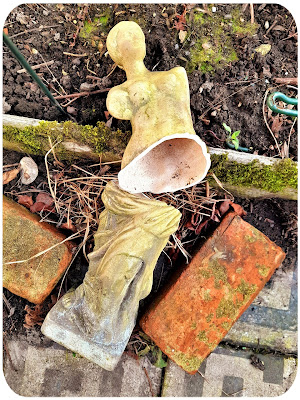 A trawl around the garden revealed a casualty of the storm we had earlier that week. Poor plaster Venus, who had been faithfully guarding the self-seeded Geranium phaeum which had settled in a gap in the paving stones, had toppled over, cleanly breaking the brave lady in two pieces! 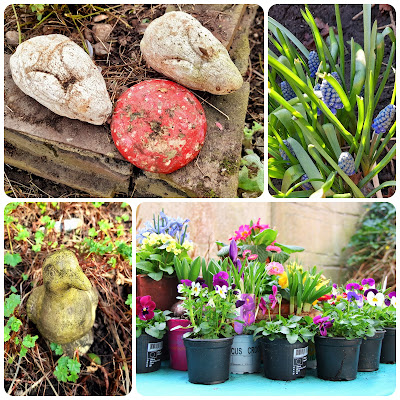 Cutting back the dry tangled mass of Mexican flea bane (Erigeron) revealed the two stone rabbits and toadstool head hiding underneath. I found the latter when digging over the soil for planting last Spring.

The little stone dove - mascot of Dove Cottage - is making its yearly appearance as well, before being engulfed by the exuberant hardy Geranium which surrounds it.

And look: last year's Grape Hyacinths (Muscari), which I planted out in the Autumn, are regaling us with a mass of Delft blue spears. 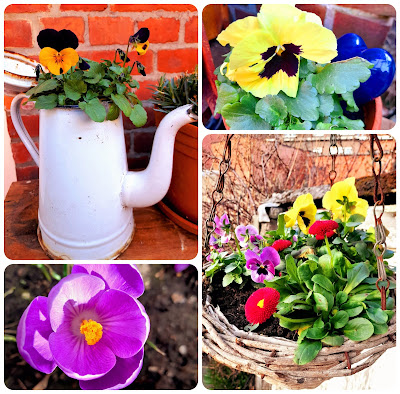 I would have loved to do a spot of gardening, and plant up all the spoils we brought back from the garden centre, but alas, the weather gods were against us. That night, we were even treated to an ominous sounding thunderstorm which came accompanied by drifts of hail.

The latter didn't seem to have caused much havoc, as an inspection on Sunday revealed undamaged purple Crocuses, which thankfully the yellow flower eating pest doesn't seem to have a craving for. 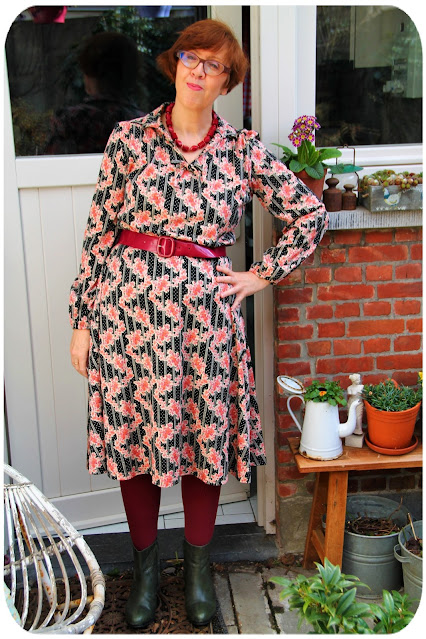 Sunday saw a repeat of Saturday's weather but minus the thunderstorm, and with the temperature nudging but not quite reaching double figures.

We made the most of one of the sunny spells for photos, in order to show you my outfit, which was built around this vintage black floral dress. With its garlands of frothy pink flowers climbing up a fence on a background of tiny white dots, it caught my eye in sorely missed vintage shop many years ago. 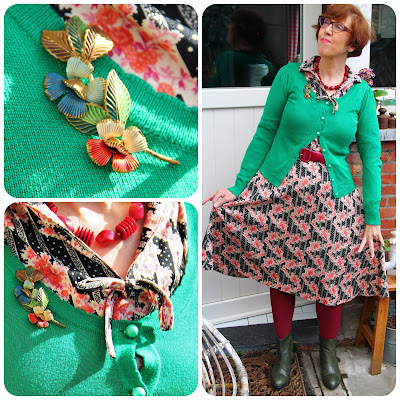 While burgundy was its main companion colour, which came in the form of my opaques, floppy vinyl belt and beaded necklace, I opted for green as a contrast colour for the cardigan I was wearing on top.

The floral brooch I pinned to the cardigan is vintage and was a gift from my friend Inez.

My footwear once again consisted of my moss green wedge ankle boots, which I seem to be reaching for a lot lately. 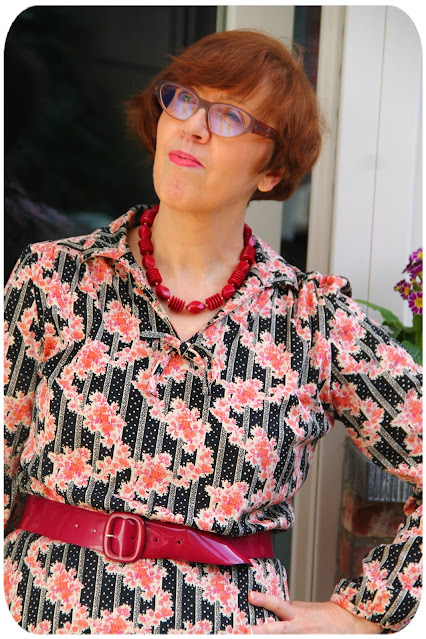 The dress's full skirt is lined and perfect for giving it a twirl or two. It has an elasticated waist, which is easily disguised by a belt, and there's elastic at the cuffs as well. Here's a closer look at its pattern and if you squint you will note the little bow at the neckline. 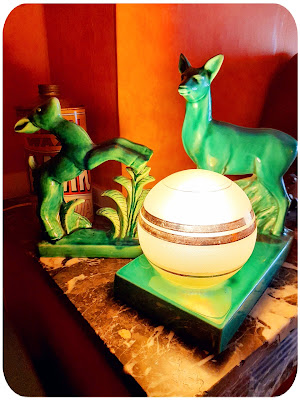 The rest of the day was spent sorting out the broom cupboard, folding away the morning's washing and entertaining Bess. Or so my journal tells me.

As rain clouds gathered yet again in the afternoon, we made ourselves cozy and comfortable, putting on pools of light, including this 1930s green ceramic deer lamp. What were the odds of finding its green companion figurine at a flea market only months later? 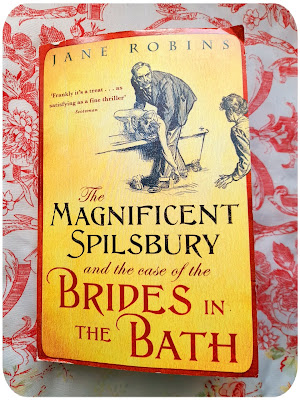 I'd just started a new book, which was found on the charity shop shelves with the Victorian era ones.

Based on a real life Edwardian era drama, The Magnificent Spilsbury and the case of the Brides in the Bath, is the gripping story of murder against a backdrop of the Titanic, Suffragettes and the First World War. Newly wedded Bessie, Alice and Margaret all drowned in their baths, apparently without a struggle, and the intriguing case temporarily ousted the 1915 Zeppelin raids from the front pages. The book reads like a thriller and is a true page-turner. In case you might like to read the book yourself, I'm not offering any further spoilers. 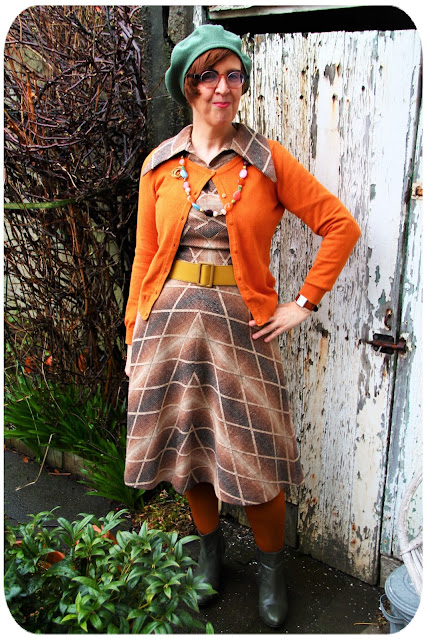 I'm quickly skimming over Monday's office day which was as dull as the grey and dismal day outside my window. It wasn't very busy so I was able to catch up with work in no time.
It rained all day on Tuesday, and with the mercury stuck at a mere 7°C, it was the perfect opportunity to give the last of my Winter frocks a whirl. The dress's Crimplene is joined by 20% wool, which makes it ideal for a colder day.
Surely, the dress's eye-catching print more than makes up for its muted beige and brown colourway, proving that these colours don't have to be staid and boring.
I found the dress at a consignment store but could have sworn it originally came from a vintage shop I used to frequent, which sadly stopped trading back in 2016. 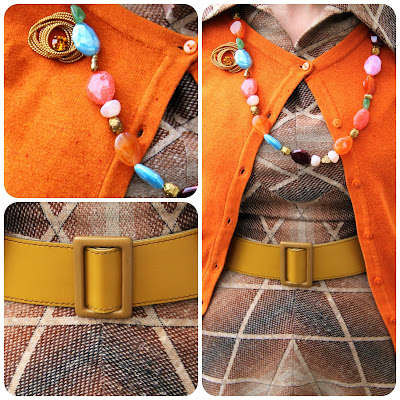 I ditched the dress's self-fabric belt for a mustard one with a rectangular buckle and book-ended it with a burnt orange cardigan and opaques.

The latter two were the only retail purchases in my outfit, the H&M cardigan having more than earned its keep in my wardrobe over the years. The necklace  with its multi-coloured beads was charity shopped, while the brooch was a flea market find, if I remember correctly. I love the faceted orange glass stone in its golden nest. 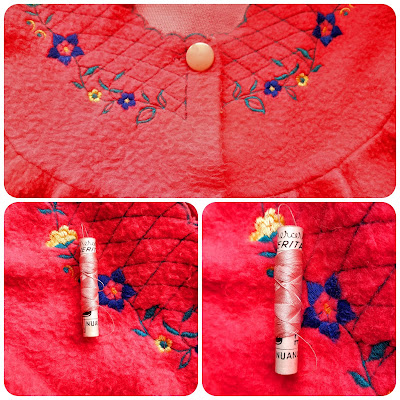 The weather being too horrible to leave the confines of Dove Cottage, I set myself some light tasks, which included re-attaching two buttons which had popped off my vintage, charity shopped, fleecy dressing gown.

The spool of pink thread was among the sewing paraphernalia inherited from my Mum. It's from Veritas, a chain of haberdashery shops still in existence today.  Nowadays, they have expanded their range with accessories and hosiery, the latter being my main reason for popping in to the shop near my office building. 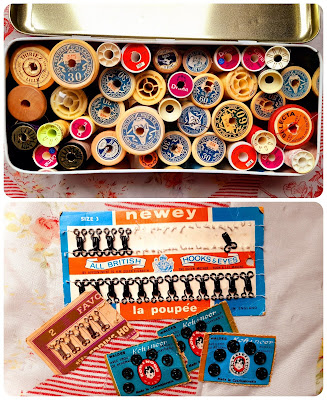 With several sewing boxes full of inherited and charity shopped stuff, I'm sure I won't need to buy any threads, press studs or hooks and eyes for many years to come!

That's all I got for you for now, but obviously I can't leave without offering you a glimpse of our newest family member, the gorgeous Bess. 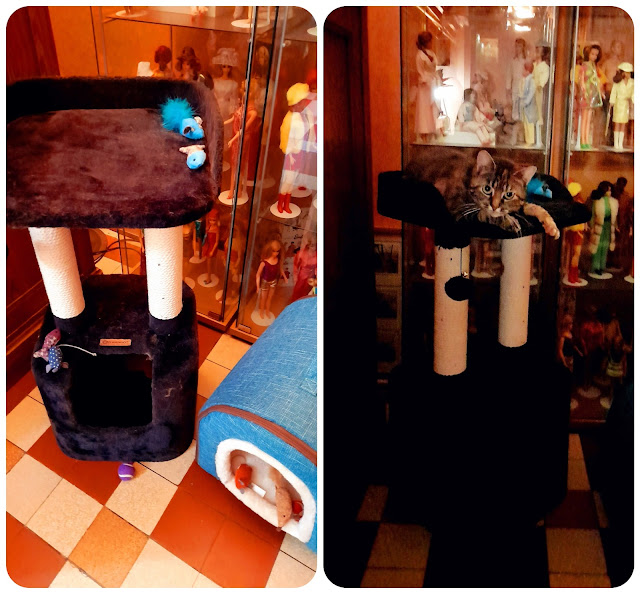 Here she is sprawled out on the platform on top of her dual scratching posts. It's nothing short of a miracle that I caught her in the act, as she usually jumps down whenever we are about to pass through what she clearly thinks of as "her" room. It's as if she isn't sure she's actually allowed to lie on there. Either that, or she's not too keen to be out in the open, preferring the safety of her wicker chair nests when we are around.

Nevertheless, after three weeks she's barely recognizable as that frightened scrap of a cat we brought home from the shelter.