Whatever life has thrown at us in this past year, and continues to do so as we speak, the world is still turning on its axis and yet another Spring has made its entrance in the Northern hemisphere.

March is marching along towards its end, with fickle April lying in wait around the corner. In just a matter of days it'll be one year since my working hours were seriously reduced. After the initial shock, though, I took to it like a duck to water. Having an unprecedented amount of time at my disposal was an undiluted luxury, only slightly marred by the sorry state of the world at large.

Fast forward one year, and the dark cloud of a return to full-time employment has been looming on the horizon for a while.  For now, however,  I've been given a reprieve and I'll be continuing  my current three-day working week schedule for yet another month at the very least.

Kudos to those who have been working full time, often in challenging circumstances, all through the pandemic! I am fully aware how lucky I have been! 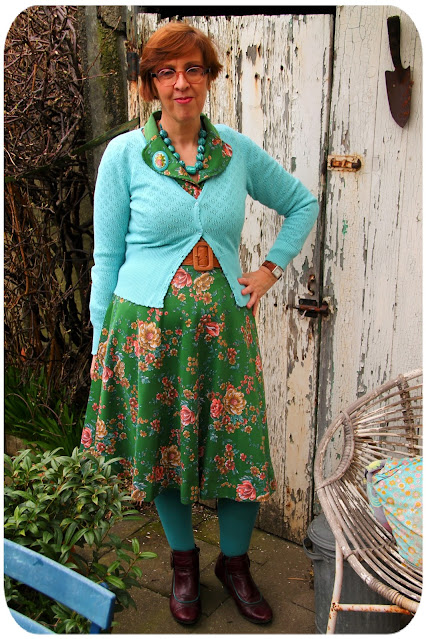 Rewinding the tape again back to Thursday, the 18th of March.

So far, the month had been quite a mixed bag, weather-wise, and it wasn't an unusual occurrence to be faced with several seasons in one day. That Thursday, however, the weather gods were fairly consistent in delivering a grey and dismal day, with highs of about 8°C.

Even though I'll be doing my wardrobe changeover quite a bit later than Sheila does, I am casting a critical eye over my wardrobe's contents, trying to wear those poor frocks who haven't yet seen the light of day this season. 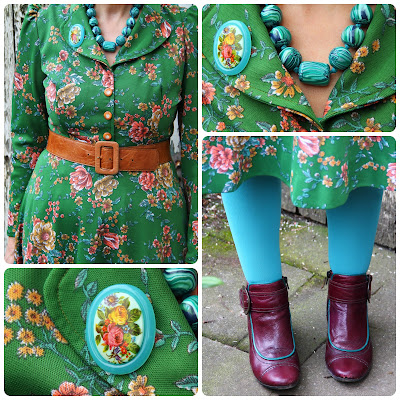 Enter this glorious 1970s does 1940s with its blowsy flower pattern on a green background. Green being my favourite colour, I'm sure that some of you are shaking their heads in disbelief that this is only its first - and probably only - wear before it is relegated to the out-of-season vacuum bags.

Funnily enough, scrolling through my Instagram squares - which is easier than going through my blog - revealed that I combined it with the same opaques and charity shopped King Louie cardigan last time I wore it. As this, incredulously, turned out to be almost exactly a year ago, I am definitely a creature of habit! 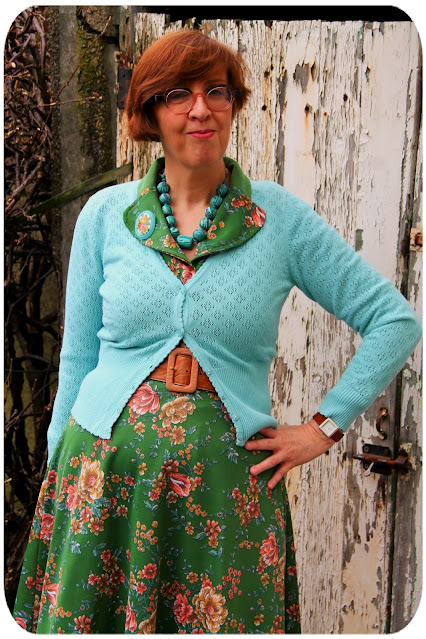 I am wearing a different brooch though, one of my vintage favourites, as well as another belt. For some reason, the latter seems to be popping up quite a lot lately.
Both the Fly London ankle boots and my necklace with its swirly teal and white beads were between lockdowns charity shop finds. 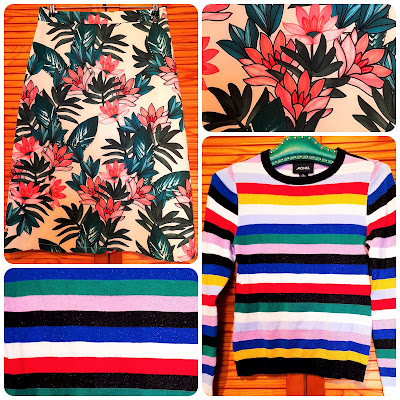 Talking of charity shopping, that is exactly what we did that day. It would be the last time for a while, although we were blissfully unaware at the time. With Spring on its way, it isn't that big a deal for us, really, as we'll be spending more time in the garden and, almost inevitably, the garden centre.

Once again, we had to turn back at our original choice of shop, as there was a queue waiting outside, which there was no way I was going to join. We then continued to a shop a bit further up the road, where I found a stripy Monki jumper with a bit of sparkle in its knit, and a midi skirt by Belgian designer Nathalie Vleeschouwer. This would have retailed at well over € 100, so mine was a snip at just € 4,50. 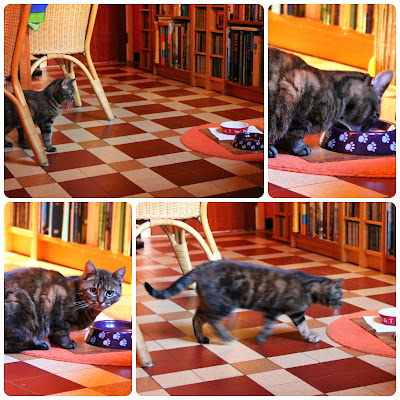 Ever since little Bess entered our lives just under a month ago, no post would be complete without reporting on her progress. And progress she is definitely making, gaining confidence on a daily basis.

As recommended by many a cat whisperer, we are letting her do her own thing in her own time, which seems to be doing the trick. But boy, does she love her food! We only have to open the kitchen cabinet it is stored in for her to come out, waiting impatiently until her bowl is filled and we put it down. 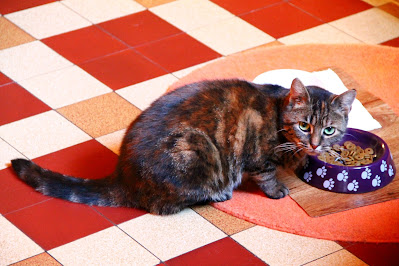 There is no petting just yet although we are longing for the day that she'll come up to us, but when I gingerly put out my hand towards her, she sometimes comes up for a brief sniff and, on two occasions, to high five my hand with her paw! Aww! 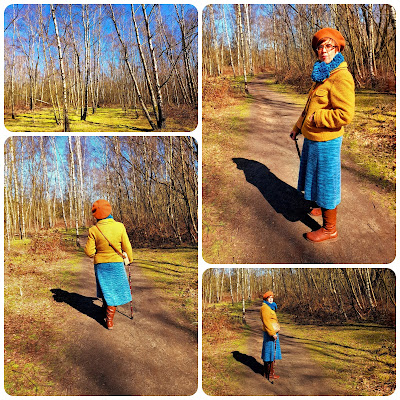 There was a considerable improvement in the weather on Friday - sadly, an office day - and even though it was still quite chilly, with the lightest of frosts overnight, the sun having come out of hiding made all the difference.

Much to our relief, the sunny spell continued on Saturday, when wild horses nor even Bess's funny antics couldn't keep us from going for a walk. 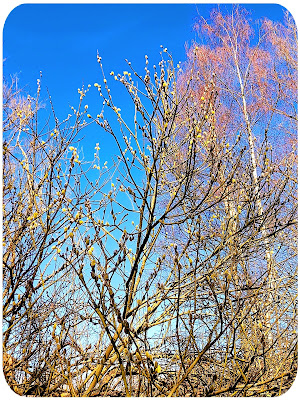 In the weekends, our local choice is rather limited, as we want to avoid anywhere too busy at all cost.

As it had been fairly dry for a couple of days, we thought we'd risk driving down to the nature reserve established on the former clay pits in Terhagen. There's a choice of paths we can take there and we were sure we'd be alright as long as we avoided a certain uphill path which seems to be mired with sticky, muddy clay most of the time. 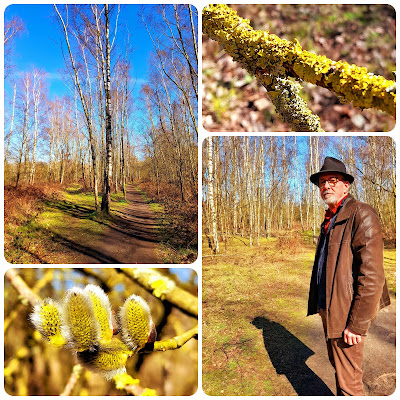 The sun was shining brightly in a deep blue sky and we could feel our muscles as well as our muddled brains relax as we walked and basked in her body and soul soothing rays.

There was a haze of green carpeting the ground beneath the trees and there were catkins and sun warmed lichen galore. Looking upwards was rewarded by the sight of a whisper of buds about to spring into leaves. 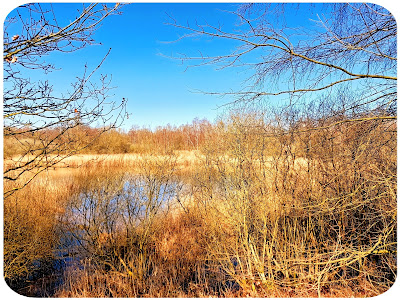 And all around us, there was joyous birdsong, joined by the cackling of geese and the high-pitched squawks of the moorhens going about their daily business on the water-filled clay pit beyond the thicket lining the path. 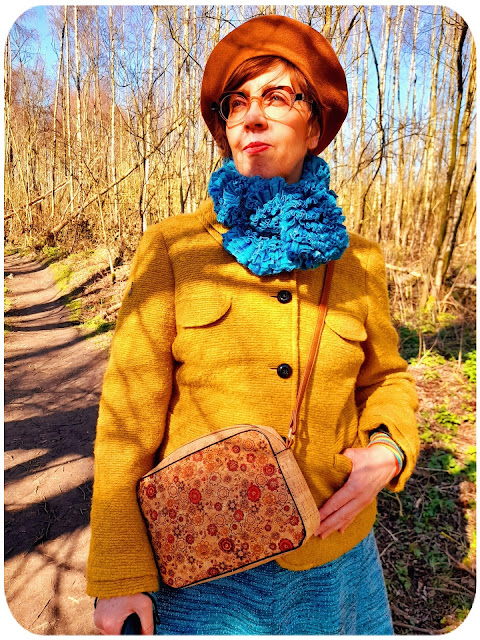 I emulated the mood of the day by wearing yellow and blue. The yellow jacket with its double collar and sleeve cuffs is by the Spanish Cortefiel brand, and was a lucky charity shop find back in February.

It accompanied one of my favourite and most worn skirts, the multi-coloured specks in its slubby turquoise fabric inviting a multitude of outfit possibilities. In the depths of where the clay pits used to be we were sheltered from the wind, so that my frilly turquoise scarf and Burberry beret were rather superfluous. As usual on our outings, I was carrying the cork bag charity shopped earlier this year. 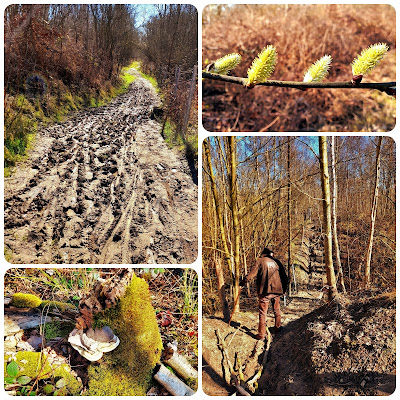 Against our better judgment, we took a path we'd never walked before. Initially, all went well, with only the odd muddy patch to negotiate. Then we came upon the mother of them all. Still we persevered and, with the helping hands of our walking sticks, we managed to keep upright on the slippery clay which was trying to suck us in, triumphantly reaching the other side.

Hurray, we thought, but then we came across a kind of sticky clay gully, leading quite steeply down and then up by way of makeshift steps which were slippery with rain-gorged clay. What can I say? We tried but we failed and had to turn back, recrossing the mud we'd only conquered minutes before. When will we ever learn to wear our hiking boots? 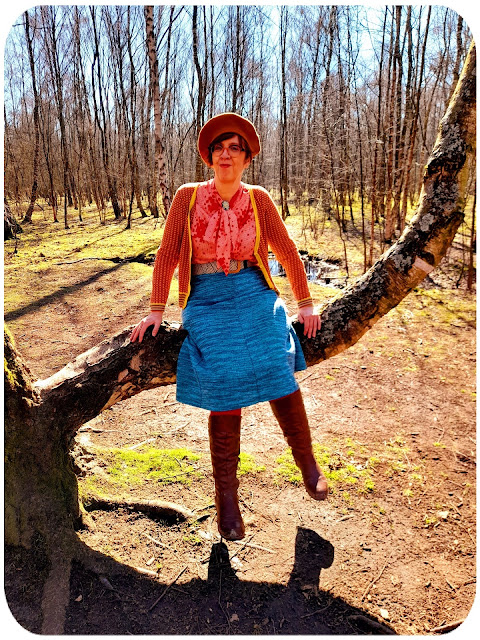 On our way back through the wood, we came across a sturdy tree branch, which was just inviting to sit and swing one's legs upon.

The perfect opportunity to remove my outerwear and show you the rest of my outfit. 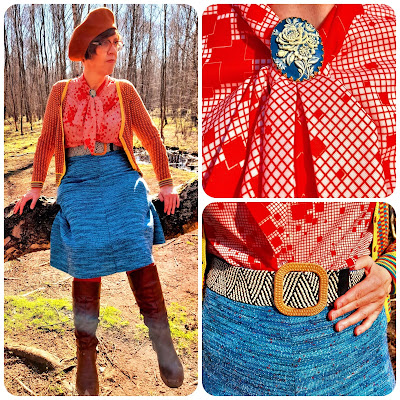 I took the lead from the red specks in my skirt's weave and wore a red and white vintage pussy bow blouse, its trellis pattern enhanced by different sized solid red squares. Echoing the skirt's turquoise, I tamed the pussy bow with a turquoise based floral cameo scarf clip from my modest collection.

I'm sure that the belt does not need further introduction, as it's one of three similarly patterned stretchy black and white belts which joined my accessories wardrobe last year. 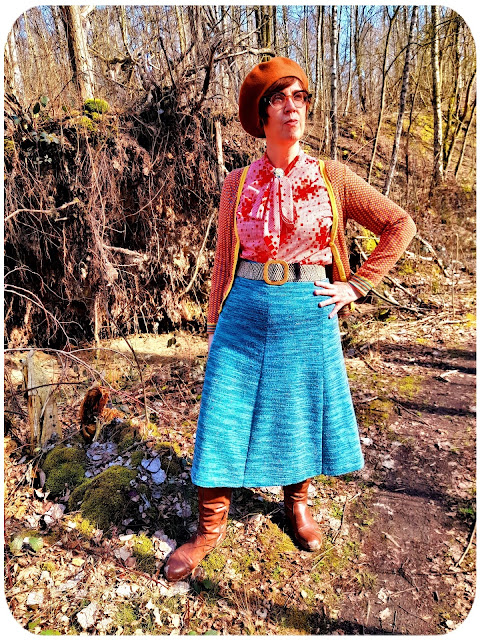 As an extra layer, I wore a yellow, red and turquoise checked cardigan, which unfortunately isn't very visible in the photos.  If I remember correctly, it was charity shopped back in 2019.

What a glorious, life-affirming day! One of those days which lead you to believe that things can only get better.

But until they actually do, please do stay healthy and happy, my friends!