On Sunday the 21st of March, traditionally considered the first official day of Spring, the sun was conspicuous in her absence. Without the glow provided by her rays, the 9°C indicated by the thermometer felt decidedly chilly, making us feel especially thankful that we'd had the foresight to go for a ramble on Saturday.

The day's gloom added to the Spring Fever Blues I'd woken up with, which in their turn had been kick-started by the doom and damnation our country was once again engulfed in as day by day the infection rate seemed to be creeping up to alarming heights. 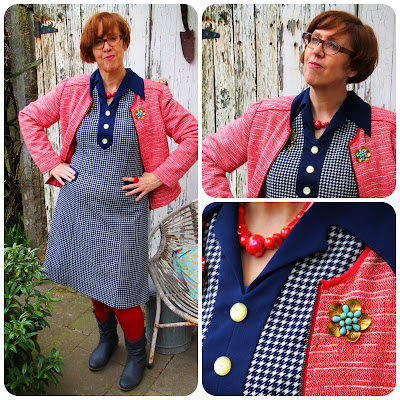 Having no plans whatsoever, I got dressed with comfort in mind, selecting this navy houndstooth patterned vintage dress which hadn't seen the light of day since last February. It was during our Anniversary trip to Bruges - a far happier occasion - that it was granted its first outing.

Wearing red opaques with the dress is almost a given, and I kept to the same colour for my charity shopped beaded necklace and my vintage brooch - a posy of red plastic berry-like flowers growing from burnished gold stems and leaves - which was a flea market find in January 2019. 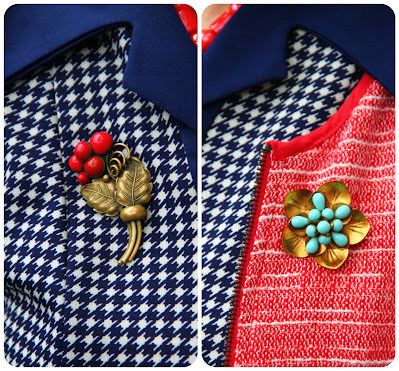 It was late afternoon when we realized we hadn't taken any outfit photos yet, so I quickly threw on the red slubbed Colours of the World jacket I found at Oxfam in February, pinning another vintage brooch on it for good measure. With its tiny turquoise beads nestling inside a gold-tone flower, this too was a flea market find, bought from the formidable Brooch Lady back in 2016.
I wasn't entirely happy with the photos we made rather hurriedly that day, which wasn't in the least helped by the fact that my hair was trying to do its own thing in spite of the fact that I'd just washed it. 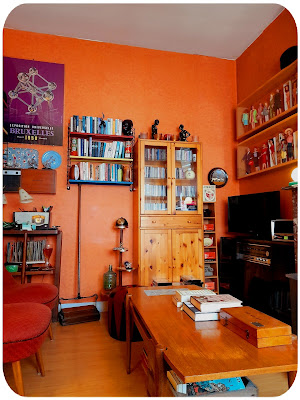 The better part of that Sunday was spent reading on the couch.

Who needs sunshine when Dove Cottage's sitting room, with its cheerful orange walls, provides its own all year around? Monday was the start of another wonky working week. Now that I'm working additional Fridays, Mondays are the quietest days of the week, so that I was able to get through my tasks in no time. It wasn't quiet in the literal sense though, as a brand new fire security system is being installed in our building, accompanied by lots of noisy drilling. Hence, I escaped the office during lunch break and went for a walk, during which a gift box of cat toys happened to make its way into my basket. 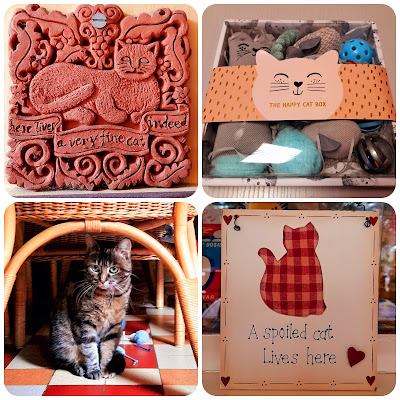 Bess happily plays with all the toys we provide her with and in the few weeks she has been with us she has accumulated a toy collection to rival any child's.

Both the terracotta tile and the wooden sign are UK holiday souvenirs from many years ago. The tile, which came from the family run Black Dog workshop in Wells - which google tells me has since moved to Bath - even pre-dates Phoebe. The very fine cat who lived at Dove Cottage at the time was our grey and white tabby cat Poesie, who was adopted by Jos and his youngest daughter An as a kitten. She lived to the age of 17 and we said goodbye to her in 2009, just under a month before Phoebe came into our lives. 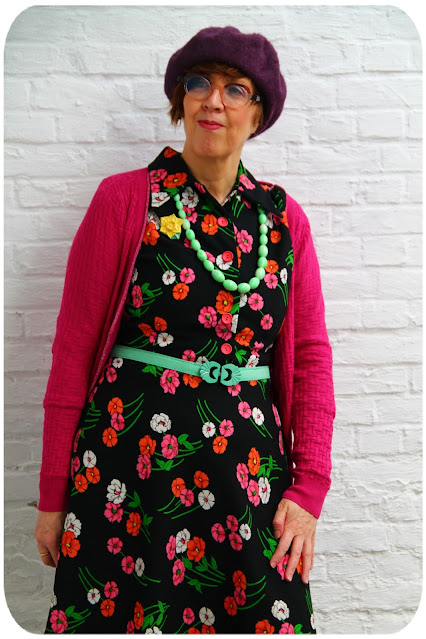 Tuesday was a sunny day for once, with the temperature making its way into the low double figures.

The sunshine streaming in through Dove Cottage's windows showed up the accumulated dust and cat hair, so I swept the upstairs rooms, the dining room, the hallway and the front room, while Jos promised to do the kitchen and bathroom on Wednesday.

As you can probably deduce from the outfit photos' backdrop - the famous white painted brick wall of our garage building - we actually went on an outing that day. 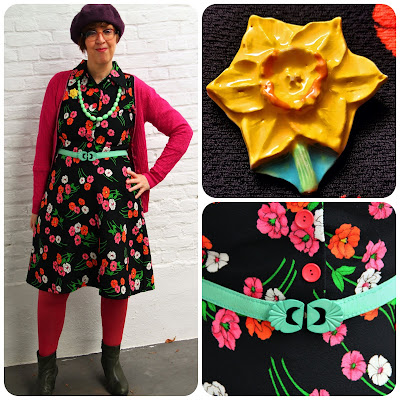 I was wearing another one of my black floral frocks, a vintage handmade one scattered with poppy-esque flowers, I picked up both the pink and the green from its pattern for my accessories. These included a pale green fabric belt with a decorative metal buckle which used to belong to a dress I've long since let go, and a charity shopped pale green necklace. The colour pink was represented by my opaques and cardigan.
Among the poppies, the yellow of the ceramic daffodil brooch clearly stands out. This was another holiday souvenir, bought from a craft shop in Cardigan, Wales in June 2017.
And look, here are my moss green wedge ankle boots again! 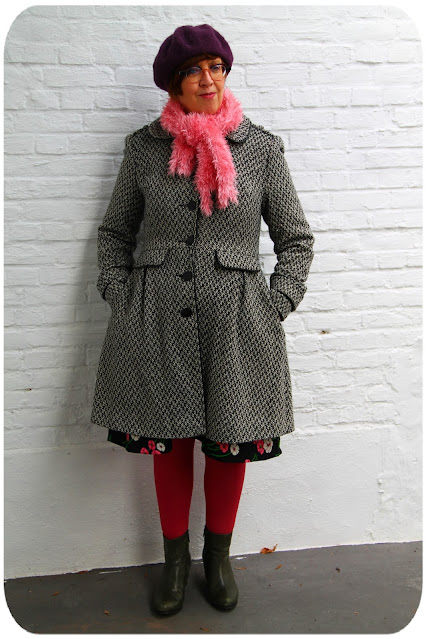 We were off to the garden centre, where we were overjoyed to see that their outside space offering perennials, climbers, small shrubs and grasses, had re-opened after its Winter closure. 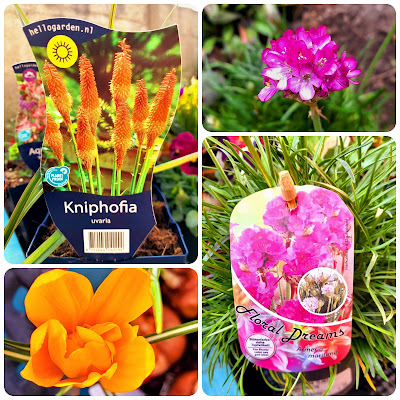 It was only natural that we made a bee-line for it, and a happy twenty minutes or so was spent browsing its treasures. Jos didn't think twice when he spotted pots of red hot pokers (Kniphofia uvaria) and, keeping in mind their apparent scarcity and elusiveness last Summer, bought two of them for good measure.

We also fell for Armeria maritima 'Floral Dreams', or Sea Thrift, which already had some early flowers although its usual flowering time is May. This is the only one I planted out immediately, leaving the rest for another day. After all, there will be plenty of time as long as I'm working at my current three day schedule. 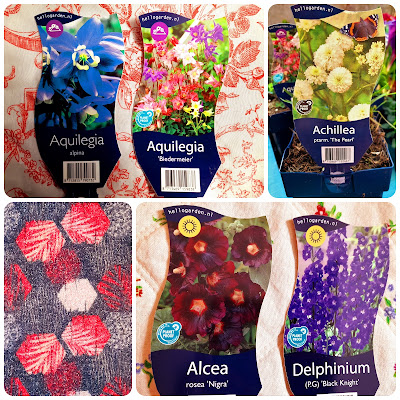 Oh, and we bought a new doormat as well, it's the blue, red and white patterned thing on the bottom left.

Wednesday was the day of our government's emergency meeting, during which our current semi-lockdown was decided upon. While I was on the phone with my boss, and we agreed to continue with our reduced hours, my hairdresser left a message that he could fit me in on Friday, which was the last day before the new regulations would come into force. In spite of it all, I did a happy dance for these two positives counterbalancing the overall air of negativity. 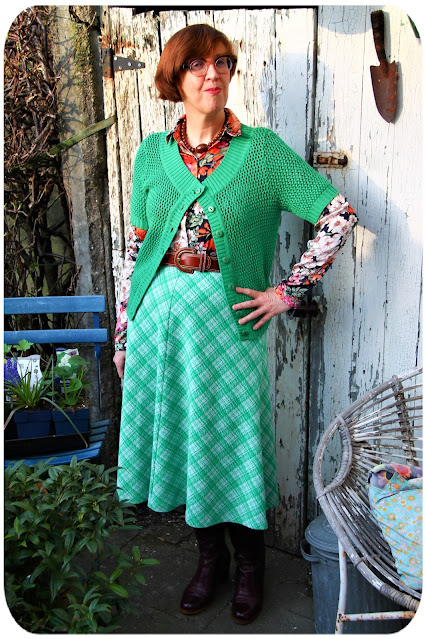 On Thursday we were treated to the usual mixture of sunshine and clouds, which came accompanied by a fairly mild 13°C.

Still somewhat knocked for six by the news of the impending semi-lockdown while trying to make sense of the usual maze of incomprehensible rules this inevitably goes hand-in-hand with, I was feeling a bit maudlin that day. Apart from a walk into town to get some toiletries and catching up with blogland, I didn't do very much at all that day. 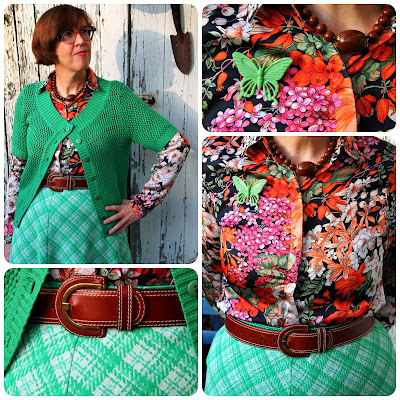 A good portion of its morning was spent playing with my wardrobe and assembling the day's outfit.

The green and white plaid textured polyester skirt is an old Think Twice find and is just right to capture those hesitant first days of Spring. Nothing Springlike whatsoever about the explosion of Summer flowers adorning my Zara blouse, which was picked up in a charity shop last July.

Both the brown belt and the green vintage Dralon cardigan were charity shop finds as well, while the green butterfly brooch was a retail buy from a small, quirky shop near my office in Antwerp. My collection also contains its pink and blue sisters.

That just leaves my chocolate brown beaded necklace which, if memory serves me right, came from Think Twice. 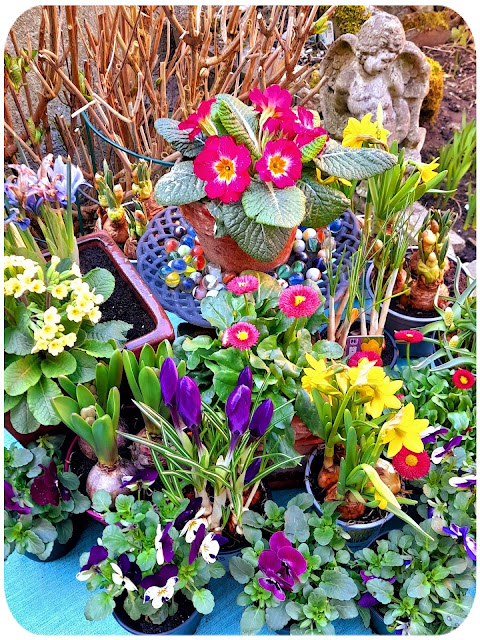 I contemplated planting up the mass of Spring plants patiently awaiting their fate on the table right outside our back door, but I simply couldn't muster up the energy required.

With Spring having only just sprung, I was fairly sure they could wait another day or two. 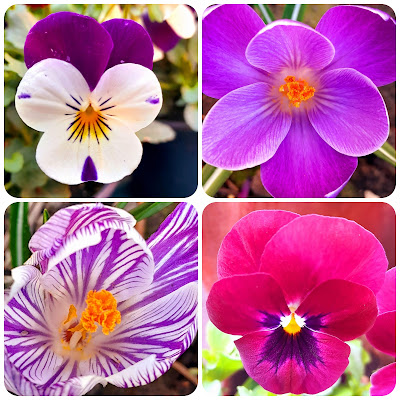 Before I call it a day, though, why not leave you with some floral cheerfulness?

Pandemic or not, they don't seem to have a care in the world but to bloom to their heart's content.

Do stay happy and healthy, my dears!