Once more in misted April, the world is growing green*

We're almost half way through April by now, and so far the month has more than lived up to her reputation for capriciousness. Bright sunny spells walked hand in hand with a sharply stinging wind which made the temperature drop to the low single figures, and with clockwork regularity snow flurries fell from lead-grey skies. The snow didn't stick or at least didn't hang around for long, but I could have sworn I could hear the mocking laugh of the weather gods when they turned the world outside our windows into a giant snow globe.

If it wasn't for the fact that what's its name put a bit of a damper on things, last April's weather couldn't have been more perfect, so I can only presume that we're now getting two Aprils' worth of those proverbial showers. 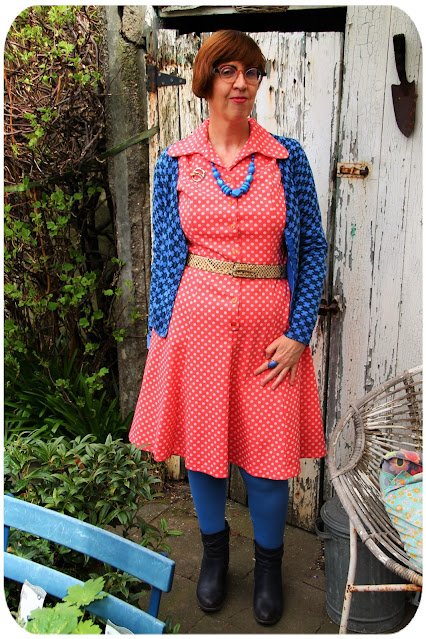 It all started well enough, though, as in continuation of the last days of March, Thursday the 1st of April was another glorious Spring day, even if the temperature had dropped from its plus twenty heights to a mere 18°C.
It would have been the perfect day for a stint of gardening, but alas: due to the Easter holidays I had to work on Thursday instead of Friday that week. This was a bit of a wrench, as much cooler temperatures had been forecasted for the weekend, and indeed, by Friday we'd landed feet first into the single figures again.
Making the remainder of my Winter wardrobe work for its money, I reached for this vintage coral polka dot dress. An early Think Twice find, it has been gracing my wardrobe for many years, and it seems I always manage to squeeze in at least one wear of it each season. 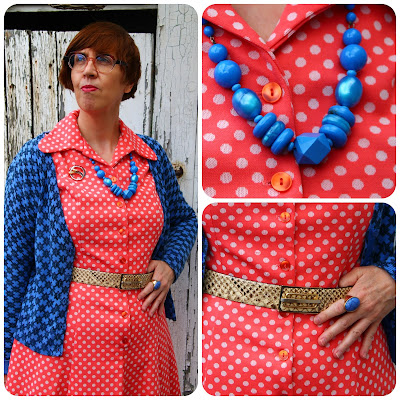 In true Sheila style, I looked back at its previous wears on the blog (I counted at least 5 times) noting that I always seem to wear it with shades of blue. What's more, I combined it with exactly the same cardigan and necklace - both of which were charity shopped - in March 2019.

More blue appeared in the glass beads on my Art Nouveau style brooch, a flea market find, and the ring, which if I remember correctly was picked up on the high street. In an attempt to break the blue rut, I added a vintage snakeskin belt. There's nothing faux about this one: it's the real thing and I snapped it up at the indoor flea market in December 2018. 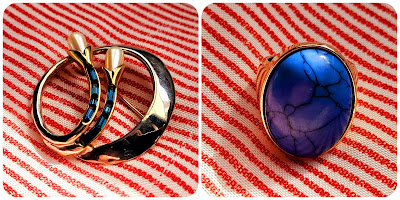 There was an unmistakable nip in the air, but as the sun was still gracing us with her presence, it was a now or never situation where gardening was concerned. The rest of the Easter weekend was looking pretty dire indeed.
First up was a trip to the garden centre! There was a buy 5 get one free sale on perennials, which was the perfect excuse to have a splurge. 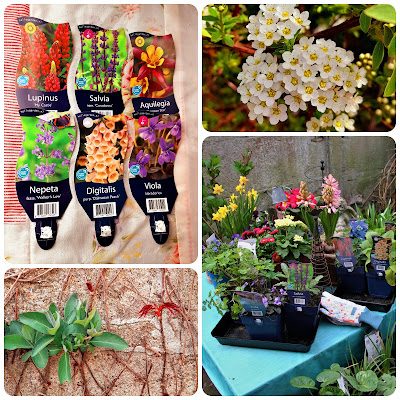 In spite of the fickle Spring weather - or perhaps because of it - the world is growing green indeed, with leaves unfurling and new growth appearing as if by magic overnight.

Our Spirea bush, which happened to be one of the first plants we added to Dove Cottage's garden after moving in all of 22 years ago, has set up its yearly fireworks show of tiny white blooms. At the back of the garden, the first of the waxy red leaves of Virginia creeper have joined the precocious honey suckle foliage scrambling up the concrete wall. Both of these are garden stalwarts as well. 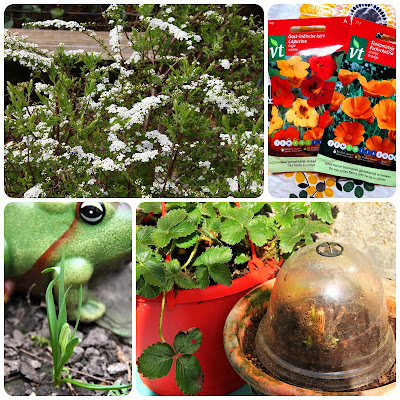 After lunch, I planted out all but 3 of the 13 plants we'd recently brought back from the garden centre, before my back insisted I call it a day. At the time of writing, they're still waiting out there, as do the Nasturtium and California poppy seeds which happened to find their way into my shopping trolley.

My heart made a leap of joy when I spotted that one of the Fritillary bulbs I planted near the pond in Autumn had decided to pop up its head after all. I'd almost given up on them. Non-ribetting frog is watching it with one of its beady eyes lest any of the garden's population of slugs and snails has marked it out for its next meal.

The plastic cloche on the bottom right is one of a set brought back from the UK in the mists of time. I use them whenever I think a plant might be in need of a bit of encouragement. Here, it's helping along the new growth I discovered in one of my patio plants. Having discarded its label long ago, it's a toss up between Echinacea and Garvinea, both of which flowered their heads off well into Autumn last year. 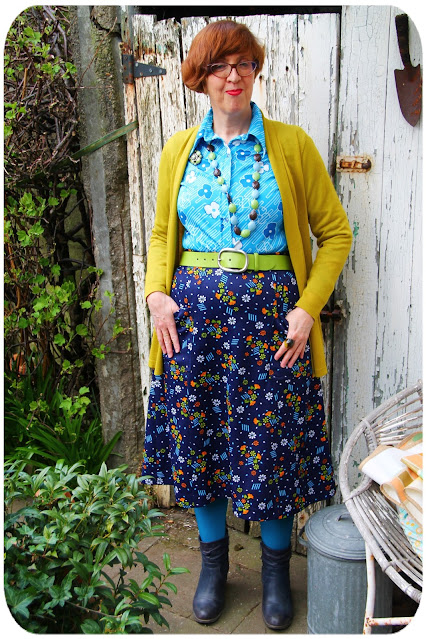 A stiff breeze and ditto back and knees didn't deter me from doing more garden work on Saturday morning. In spite of the weather forecast, the sun played peek-a-boo with the clouds all day, warming things up sufficiently to have the mercury climb into double digits.

Before I show you my gardening handiwork, here is what I was wearing. I was totally convinced that this skirt and blouse combo was a first, but when I scrolled through my Instagram squares in search of the skirt's last wear, I was stumped to find that just over a year ago, I wore it with the very same blouse! Zero points for originality, but it does seem to work, so why not?  I was quite relieved to see that at least my accessories were completely different back then. 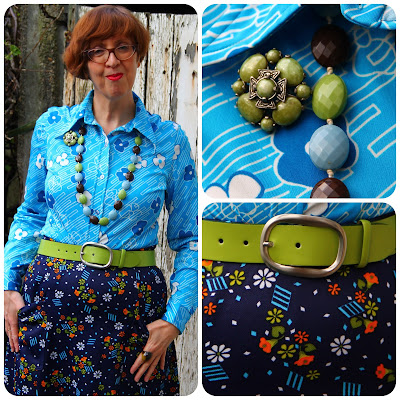 Both the blouse and the skirt were Think Twice finds, the skirt being handmade, lined and graced with satisfyingly deep patch pockets. I picked up the chartreuse in its floral pattern by adding a charity shopped belt in a similar shade. I kept to green for the Miracle brooch pinned to the blouse while the colour appears yet again, alongside blue and brown, in my long beaded necklace.

My opaques echoed the blues of the blouse and I wore a pair of navy ankle boots for the outfit photos.

Obviously, I changed into my ankle wellies for my gardening session, wearing an old fleece jacket and my long denim gardening apron on top for warmth as well as protection. 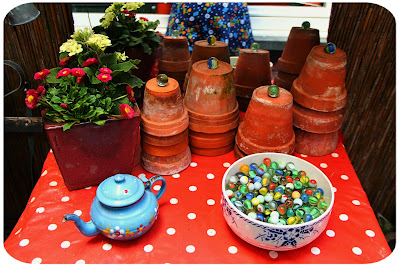 I gave the red dotted vinyl tablecloth on the table in the passageway a thorough clean and removed the dust and grime from the old bathroom mirror at its back. Then I made neat stacks of the smaller terracotta pots I'd emptied and cleaned out the previous week. Having once again forgotten to protect the old ceramic wash basin from frost, it had now developed several large cracks, so that there was nothing for it but to add the shards to my stash, to be used for decoration and drainage. 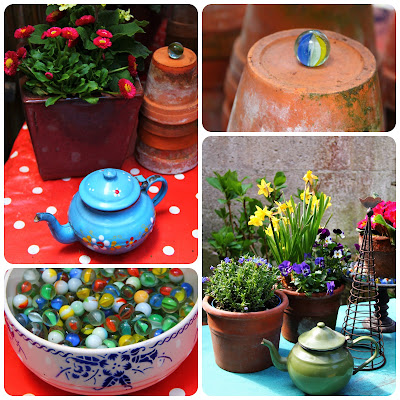 Its contents of marbles, my brother's childhood ones brought back from the parental home, was decanted into a smaller bowl standing idle in the kitchen cupboards. On a whim, I used some of the larger ones to decorate the tops of the terracotta pots.

Both the blue floral and green enamelled tea pots used to live inside the house but ended up in the garden after a recent cull. 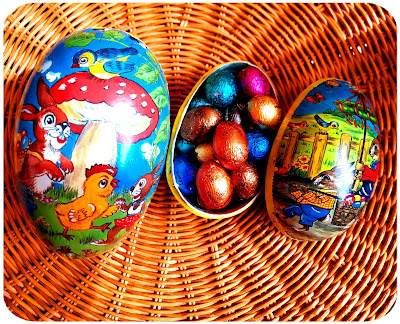 Easter dawned grey-skied with no trace of sunshine until late afternoon. The distinctly dismal weather, however, was greatly improved with a handful of chocolate mini eggs from our local Leonidas shop. And what better way of serving them than by putting them into vintage papier-mâché eggs decorated with Easter scenes! The latter were old flea market finds I'd almost forgotten about. 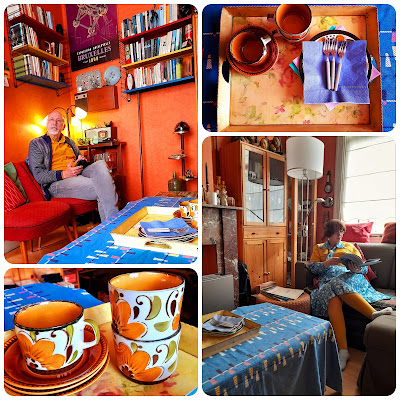 Something else to look forward to that day was the arrival of our first visitor since last Summer! We were expecting Jos's youngest daughter An, who arrived on her e-bike from the nearby town of Lier, where she lives with her two cats, Spookje and Hazel.
It is almost a given that I forgot to take photos, as we were far too busy chatting.
She came bearing gifts, too. Apart from a pot of daffs and two mice and a bag of cat treats from her cats to our Bess, she also presented us with some of her authentic arts and crafts. 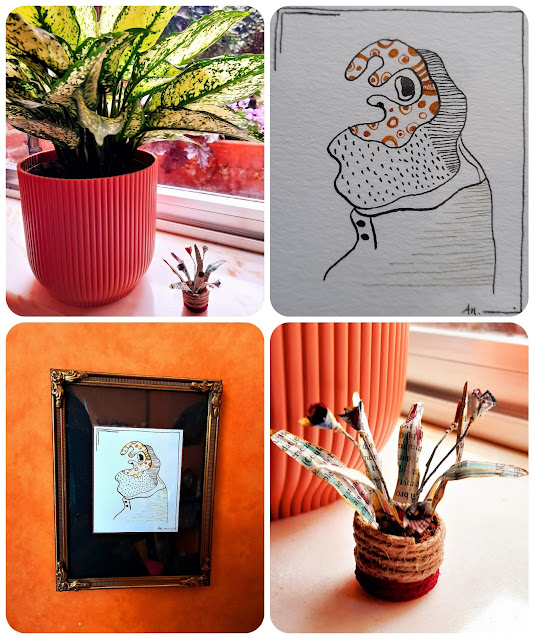 We are delighted to finally own one of her amazing miniature drawings - it only measures 5 x 6 cm - which is already taking pride of place on our sitting room wall. She also made us a tiny handcrafted pot of flowers, standing barely 7 cm high.  I've only put it next to the plant on our window sill to emphasize its smallness. Far too risky to leave it there, now that Bess is getting more adventurous by the minute! 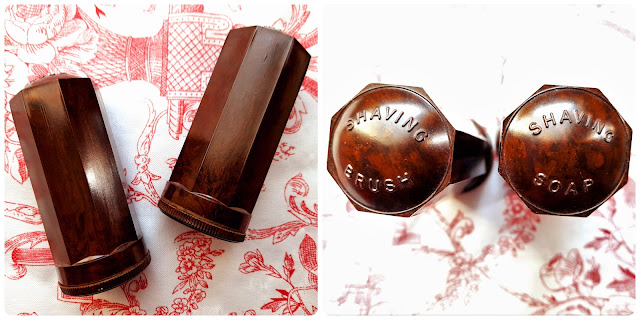 But that wasn't all. On one of her final Pre-Covid flea market forays, An came across some wonderful additions to our Bakelite collection, in the form of these shaving soap and brush containers. 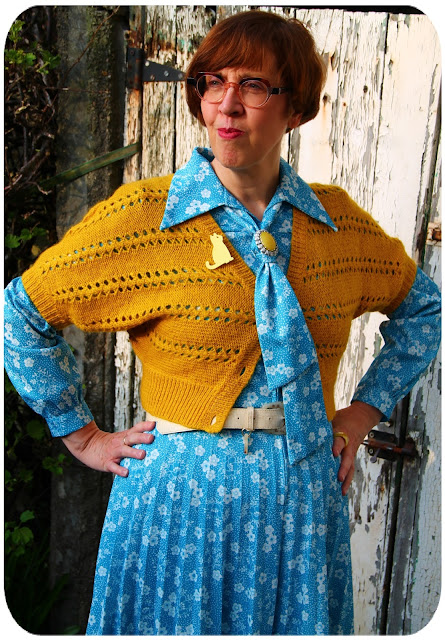 In spite of the greyness of the day, I was determined to wear cheerful Spring colours, emulating blue skies and sunshine.

My flower sprinkled sky blue dress, with its generous pleated skirt and tie collar, was just perfect for the occasion. I tamed the rather cumbersome tie with a yellow hearted brooch. The dress's belt loops are the telltale signs that it originally came with a belt, but this was long gone by the time it leapt at me from the rails at Think Twice. Knowing me, I probably wouldn't have worn it with the belt anyway. 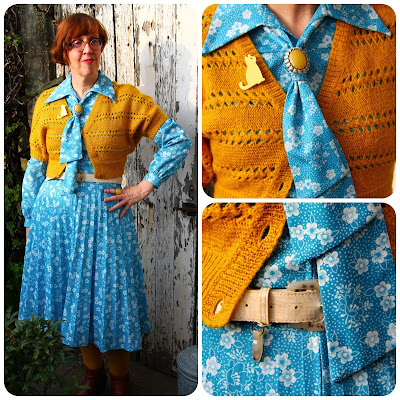 Instead, I opted for a textured off-white belt with a mottled plastic buckle, which has the added attraction of a small dangling fish. Perhaps in honour of the 1st of April, as the traditional April Fool's pranks are being called April Fish in Belgium, as well as, according to good old Wikipedia, in Italy, France, and the French-speaking areas of Switzerland and Canada,

Sunshiny yellow was provided by my charity shopped H&M batwing cardi and my opaques. Oh, and the pale yellow cat brooch I bought from Katty's shop the other week.

And speaking of cats, what about a short video starring the new Princess of Dove Cottage?

This is a first for me, so I do hope it works.

* The title of this post was borrowed from An April Morning by Canadian poet Bliss Carman (1861-1929).

Posted by Polyester Princess at 19:06