If the contents of this post are a tad incohesive, it's because Dove Cottage is currently surrounded by building sites. Two houses down on the right are having a kitchen extension done, with builders knocking down the existing one, while on the other side of the crossroads on the left, which is about 50 meters away, the construction of a new block of flats is being prepared. The latter is by far the worst, as foundations pilings are being driven into the ground by a giant machine, making poor little Dove Cottage and its contents rattle and shake and, at one point, two frames crash down from our kitchen wall!

Thankfully, Bess has been mostly sleeping through it all. Nevertheless, as the dining room seems to be  taking the brunt of these man-made earthquakes, she does look a bit wide-eyed and confused whenever the shaking is at its worst. Speaking of Bess, as it's obviously that I have to, she is doing very well indeed, taking giant steps towards making Dove Cottage her home. She even ventured upstairs for the first time yesterday!

Oh, and I've got other news as well. Last Friday, Jos's vaccination invitation finally fell through the letter box, and I'm happy to say he'll be getting his first jab on April 17! Yay! 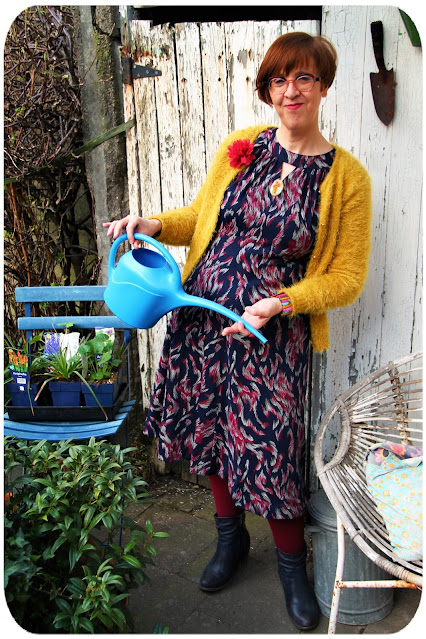 As you are probably used to by now, my blog is doing its time-machine trick, taking us back to the last weekend of March, starting with Saturday the 27th.

After a sunny and reasonably mild Friday at 13°C, the temperature had dropped a couple of degrees by Saturday, and we were treated to a day of intermittent light rain and sudden bursts of sunshine.

Being a bit bored with my Winter wardrobe by now, I scoured my wardrobe for things that hadn't seen the light of day this season yet. In fact, it might have been this vintage dress's first proper outing ever.

I came across it at an outdoor flea market a couple of years ago and although it didn't come cheap and there was no opportunity to try it on, I took a gamble on it, which I'm happy to say has paid off. 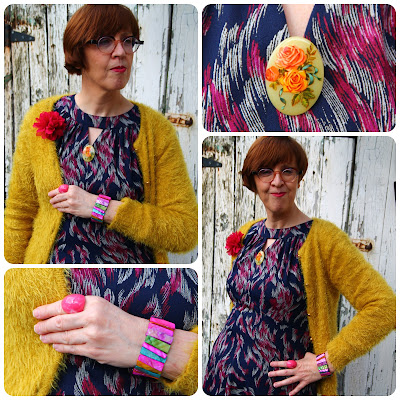 Long-sleeved and in a lightweight semi-sheer but lined fabric, it's the kind of garment that usually falls between seasons, not nearly warm enough on a single digit Winter's day while generating hot flushes on a sun-soaked Spring one.

I love its flattering shape, its feathery magenta and off-white pattern on a deep blue background and, of course, its keyhole neckline.  As it was rather chilly, I wore a t-shirt underneath, but as it kept playing peek-a-boo through the keyhole, I added a strategically placed brooch to keep it in place.

Other accessories included a pink plastic ring and a multi-coloured shell bracelet. To my fluffy mustard cardigan I pinned one of my flower corsages. I have quite a collection of these and was happy to read in Goody's blog post earlier this week that I'm not the only one! 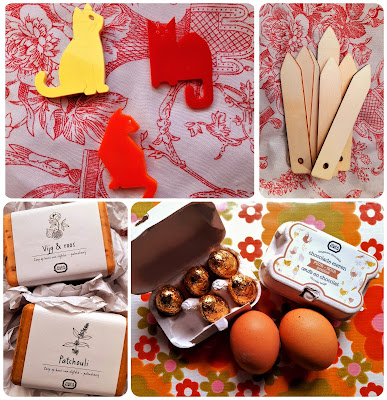 Returning from my rescheduled hairdresser's appointment the previous day, I suddenly remembered Katshop, a shop selling all manner of cat related things which had opened opposite the salon last Summer.

I went for a browse, had a chat with its lovely owner Katty and bought a battery-operated little gerbil for Bess (see below collage, bottom left) as well as some colourful cat brooches for me!

On my way back to the office I hopped into Dille & Kamille, which sells authentic home, kitchen and garden goods, from where I picked up plant labels, some divine smelling soaps and two tiny cartons of chocolate eggs. 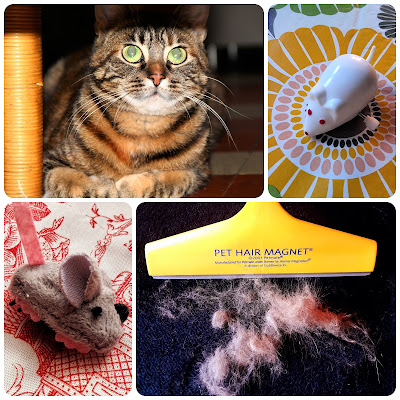 Bess loves playing with her gerbil, honing her mouse hunting skills by chasing it across the floor. She's also quite fascinated by the white plastic wind-up mouse, which she nevertheless watches from a safe distance as it makes its unpredictable trajectory through the room.

But why oh why did we have to buy a scratching post with a black plush covered seat? It's a good thing we've still got the pet hair magnet gadget we purchased many years ago! 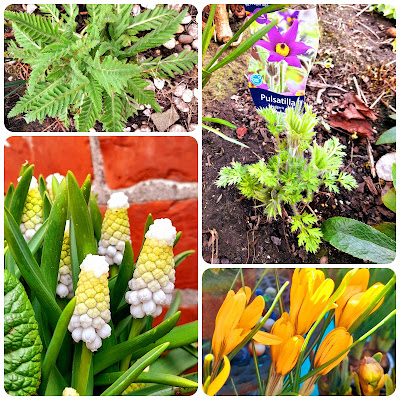 When on Saturday afternoon it looked as if the rain clouds had finally departed elsewhere, I spent some time in the garden, inspecting the borders and cutting back the old growth of the perennials where required. I also made a start in clearing the pots of expired patio plants at the back of the garden.

There are big fat flower buds in the Pulsatilla vulgaris (common pasqueflower, top right) I planted back  in Autumn, and I was overjoyed to see that last year's Oriental Poppy has burst back into life with abundant foliage (top left). 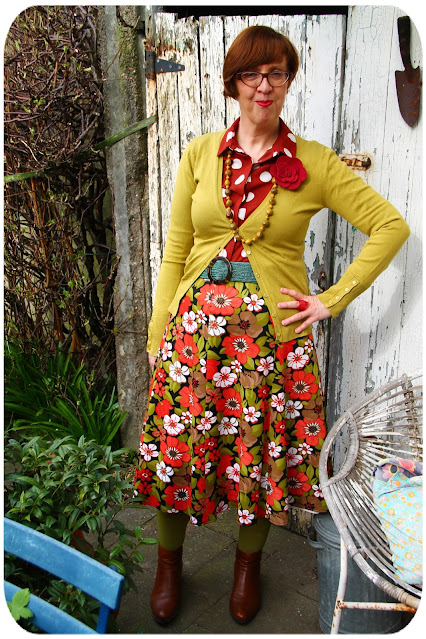 On Sunday, the sun was shining brightly, but as the 14°C indicated by the thermometer was cooled down considerably by a strong wind, I initially scrapped my gardening plans for the day.

I'd settled down to a day of pottering, including sweeping the dining room and the stairs, when the siren call of the garden - and that table full of plants - became too loud to ignore after all. 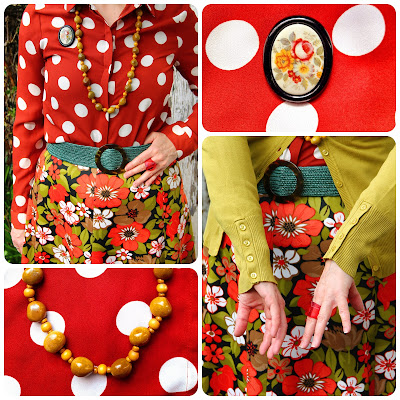 That morning, I was in no doubt that I was going to wear this particular skirt, which was part of my haul at the charity shop's retro event back in March 2019. Isn't its orange-red, lime green, caramel and white floral pattern a sight for sore eyes?

My lime green opaques were a no-brainer, but some head-scratching was involved before my eyes alighted on this rusty red polka dot blouse. This was a charity shop find as well, bought on the same day as the floral Zara blouse I wore in my previous post. 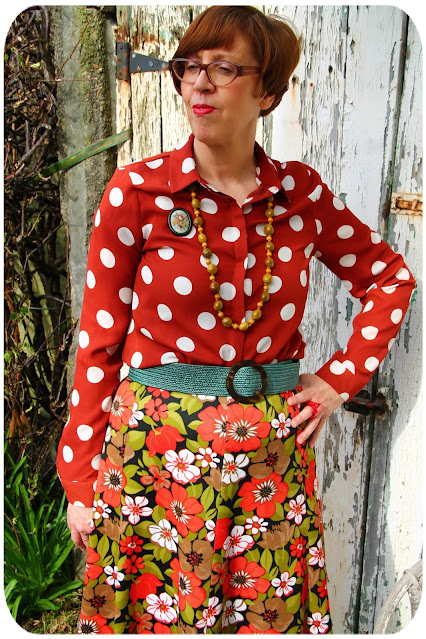 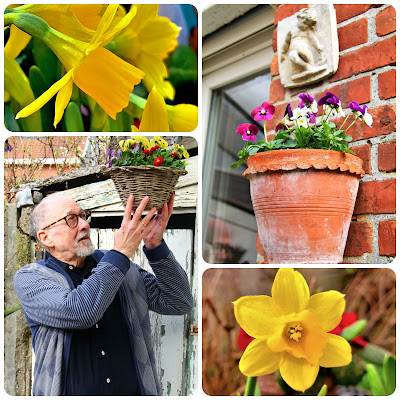 I donned my gardening apron, gloves and ankle wellies and potted up all the Spring plants which had been patiently awaiting their turn.

That only leaves the perennials we brought back from the garden centre earlier that week. They'll be next in line after I figured out where to put them! 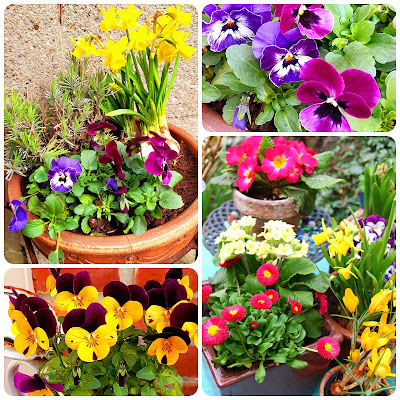 Nature kept cranking up her thermostat that week, starting with a balmy 20°C on Monday. The perfect temperature to get cracking with some more gardening, but unfortunately it was one of  my working days. Apart from a bothersome technical hick-up first thing in the morning, the day was uneventful, so I felt a bit sad pining away inside, looking at that cloudless blue sky and breathing in that none too fresh city air through the office's wide open windows. 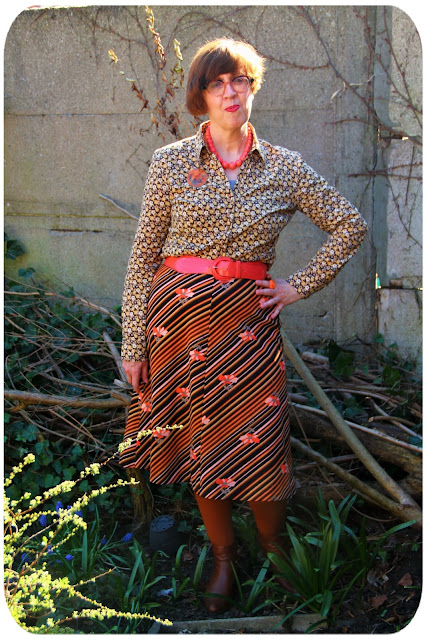 Thankfully, the glorious weather continued on Tuesday, when we were treated to Summery highs of 23°C.

With most of my Summer clothes still in hibernation, I opted for a crispy cotton long-sleeved blouse rather than one of my Crimplene short-sleeved dresses which I'm keeping out all year around.

A charity shop find back in the mists of time, this pale yellow and brown daisy print blouse is from a label called Mandarin & Mint, who I believe have or at least used to have a shop in Antwerp.

I combined it with a vintage 1970s skirt, one of my earliest Think Twice finds which, with its diagonal black, grey, brown, orange and coral stripes dotted with flowers, was love at first sight. 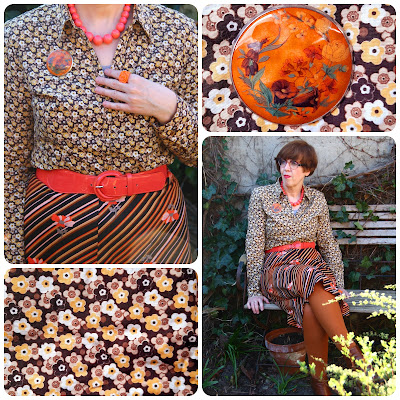 The sun was shining fiercely, so that we had a hard time finding a suitable place to make outfit photos where me and my clothes wouldn't be bleached out by her glare.

Note that I'm wearing opaques in spite of the temperature. I'm not ready to go bare-legged just yet! Besides, I'd only blind you with their day-glo paleness!

Accessories were all orange based, from my ancient half-elasticated belt, beaded necklace and flower moulded ring to the large enamelled vintage brooch. 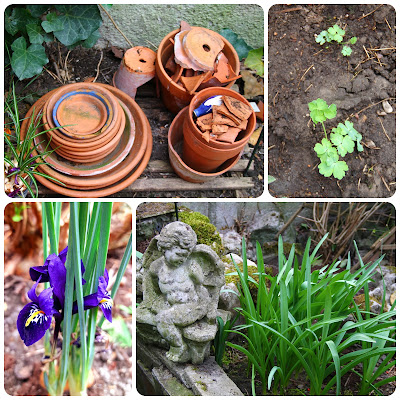 I changed into worse-for-wear gardening gear to clear away the rest of last year’s pots, grouping them together in the passageway, stacking up the terracotta plant pot dishes, and collecting any broken posts to be used as crocks for drainage.

One of the pots contained two Aquilegia seedlings which I planted out in the garden (top right).

My final task was to find an out of the way space for the spent Spring bulbs which I'd lifted from their pots. The initial plan was to let them rest and die down for planting out next Autumn, but when I noticed that one of the Iris reticulata had developed a new flower, I planted it in the border there and then.

And speaking of bulbs, look at all those Alliums coming up. Even our garden angel looks quite pleased with them!

I hope you've been having some lovely Spring weather where you are?

Ours, unfortunately, didn't last. But that will be for next time. In the meantime, as always, do stay healthy and happy!