And Spring arose on the garden fair

If it was still a bit too chilly for the time of year, with frosty dawns and a stiff breeze, at least the sun had decided to pay us an extended visit in the weekend before last.

Now we could have done any number of things in such weather, all of which would unfortunately have required meticulous forward planning. Our first priority is to avoid crowded places, where we have to slalom through groups of people and do the Covid shuffle until we're dizzy. At the same time, we are more than just a bit bored with walking in the same places, selected for their quietness, again and again. Bored of all the regulations and limitations drowning every last bit of spontaneity.

Sometimes it's hard to recall just what the old, pre-Covid, normal was like.

So, more often than not, we stay put behind Dove Cottage's front door, which fortunately includes our very own handkerchief sized corner of heaven. 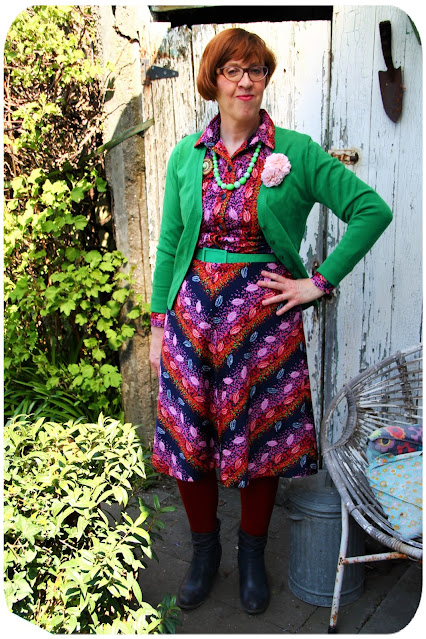 No forward planning whatsoever was involved in Saturday's outfit. Or was it? I happened upon this dress while I was making a start with my seasonal changeover the weekend before. It hadn't been worn at all this Winter and I was actually going to put it in the flea market boxes when I decided to give it one last chance.

The dress in question, its leaf-strewn vertical bands of navy, pink and red meeting chevrons in the skirt, has always been one of my favourites. Then why even consider getting rid of it you might wonder? Well, the last time I tried it on it had become far too snug on me and after closing both its side zipper and front buttons, its seams were ready to burst, which made me all but burst into tears. 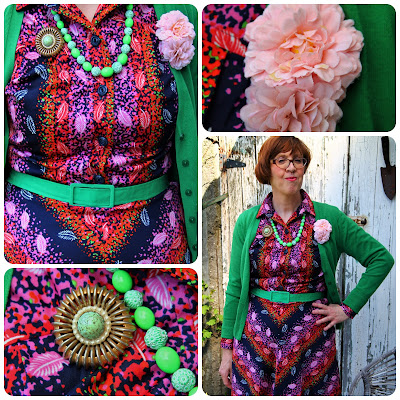 I put it aside for a final try-on and mentally prepared myself for disappointment, when lo and behold: it fit me perfectly again. I could almost hear those seams sigh in relief.

I took advantage of the specks of green throughout the dress's pattern to pick green as an accent colour for my cardigan, brooch and necklace. I then had a bit of a problem finding a belt in the right shade of green and was just about to give up when I remembered this one, which belongs to a Summer dress. The dress's pinks were kept company by the two sugar pink flower corsages I pinned to my cardi.

It might not be very noticeable in the photo, but I was wearing rusty red opaques. My navy ankle boots were only worn for the photos, as I was either in my slippers or my ankle wellies all day. 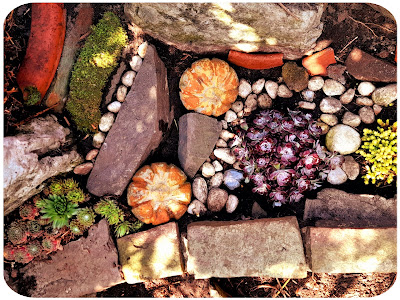 Clearing the pile of dead wood as well as a considerable amount of rampant ivy did not only create additional space to add yet more plants, it also freed up the terraced edges of the sunken part in the centre of our garden. Here, Dove Cottage's original owner had lovingly created a rock garden complete with a little house and windmill, and presided over by a tacky plastic garden gnome pushing a wheelbarrow.
Some of the original planting still remained when we took over the garden, but were replaced one by one over the years, as we tried to cram in as many of our cottage garden favourites as possible. As our little plot had become quite neglected in recent years, allowing the ivy to become a huge out-of-control monster, the terraces had all but disappeared completely.
That Saturday morning, I made a start with restoring it to its former glory, planting Sedums and Sempervivums and adding pebbles, shards of terracotta pots and two stone pumpkins which I found lying around in the garden. 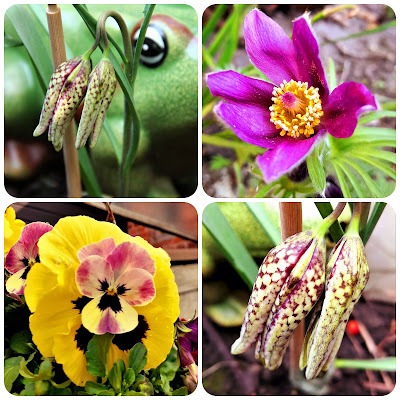 I was delighted to see that the one and only Fritillary bulb which had deigned to come up was bearing not one but two flower heads. Elsewhere, colour was supplied by the vibrant Pulsatilla flowers and a medley of violas and pansies.

The red Valerian (Centranthus ruber) which we planted last year is preparing to shine once more and we can be quite certain of another bumper crop of white currants.  Bluebell spikes can be glimpsed among their abundant foliage and the shed and back wall is dotted with the first of the unfurling rusty-red lacquered Virginia creeper leaves. 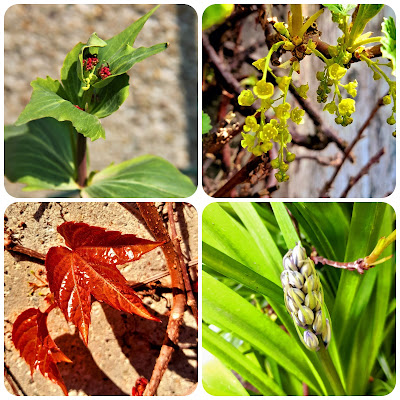 "And Spring arose on the garden fair,
Like the Spirit of Love felt everywhere;
And each flower and herb on Earth's dark breast
rose from the dreams of its wintry rest."
-  Percy Bysshe Shelley, The Sensitive Plant 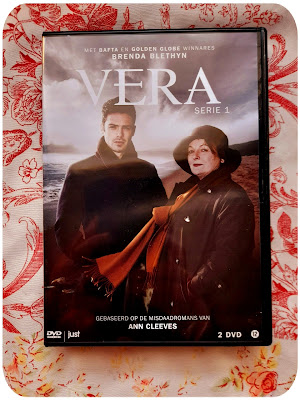 Garden pursuits finished, it was time for lunch, after which I traipsed upstairs to catch up with blogland. Meanwhile, Jos was due at the vaccination centre, where everything went like clockwork. As luck would have it, he was even able to see his granddaughter Saar, who is volunteering at the centre.
As instructed, Jos took a paracetamol as soon as he got home and another one before going to bed that night, and we are happy to report that he did not suffer from any side effects whatsoever.
As usual, our Saturday night plan was to watch one of our extensive collection of crime series DVD's. After recently finishing the latest series of Vera, we decided to re-watch the whole series from the beginning.  Unfortunately, our DVD player - an ancient thing we inherited from my Dad - refused to cooperate. It had been playing up since a couple of weeks, taking several attempts to read a DVD. This time, however, we had to admit defeat after half an hour of fruitless attempts. Instead, we read and listened to our DAB+ radio before retiring for the night. 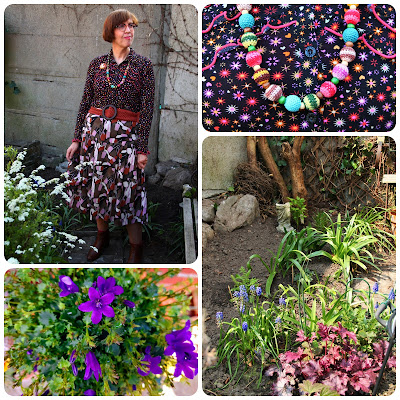 Sunday was another gorgeously sunny day, the mercury climbing to 14°C.
The perfect weather to continue with the garden jobs, if it weren't for my right index finger, which I'd sprained a while ago and was now quite sore after all the strain I'd put it under on Saturday.
Instead, I just sat there looking longingly at the plants we'd brought back from the garden centre and feeling quite sorry for myself, until Jos suggested he'd to do the digging and planting while I supervised. Obviously, that was fine by me! 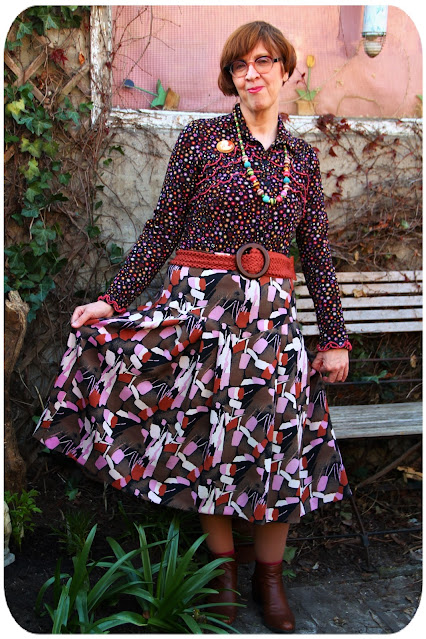 That meant I didn't even have to change into proper gardening gear.
The starting point for that day's outfit was the skirt, a handmade affair in a crepey fabric with a swishy lining, picked up at Think Twice many moons ago. I suspect it is 1980s although its print is doing its utmost to look as if it came straight from the 1950s.
The frilly blouse with its galaxy of hearts, stars and flowers, which sports a Kookai label, was charity shopped last September. 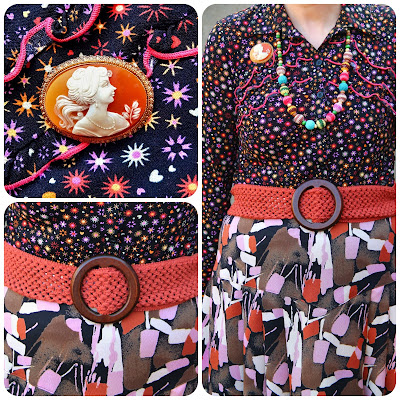 The crochet belt was a post Lockdown I sales bargain, while the Cameo brooch was a flea market find. More crochet appears in the necklace - another charity shop find - which I've worn on the blog many times before and surely needs no further introduction.
The tree trunk is all that remains of the deceased Lilac. Too big to chop up for council collection with the tools at Jos's disposal, we decided to make a feature of it and put it in an upright position in the corner, to be used as a frame for the herbaceous Clematis jouiniana ‘Mrs. Robert Brydon’ to climb upon. Mrs B. is kept company by the bottom half of poor plaster Venus, victim of a March storm. 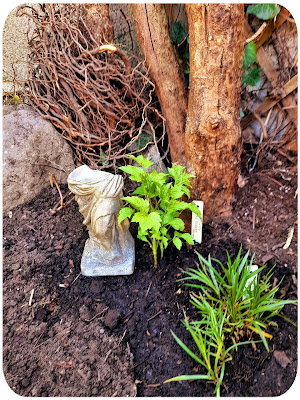 The plant on the bottom right is Achillea ptarmica 'The Pearl', Wikipedia tells me its common names include sneezewort, sneezeweed, bastard pellitory, European pellitory, fair-maid-of-France, goose tongue, sneezewort yarrow, wild pellitory, and white tansy. Some of which I like better than others!
We also planted Geranium 'Tiny Monster' and Polemonium caeruleum or Jacob's Ladder. 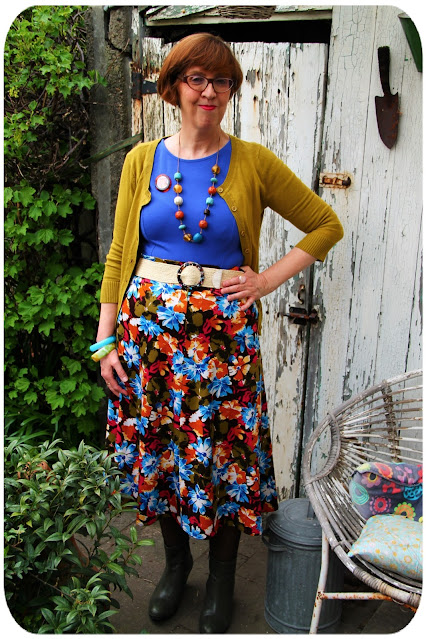 We're conveniently skipping Monday's office day to arrive on Tuesday the 20th of April. Gloriously sunny and with the temperature soaring to an almost unheard of 17°C, it would once again have been a day made for gardening. Naughty index finger, however, was still giving me gyp.

Instead, we made a trip to the nearby town of Mortsel for the purchase of a new DVD player, or rather, Blu-Ray player. As we were still in semi-lockdown, shopping in non-essential shops was only possible by appointment. However, this particular one allowed people to just turn up and queue. As luck would have it, we were the only customers and were soon helped by a friendly and very knowledgeable young man. 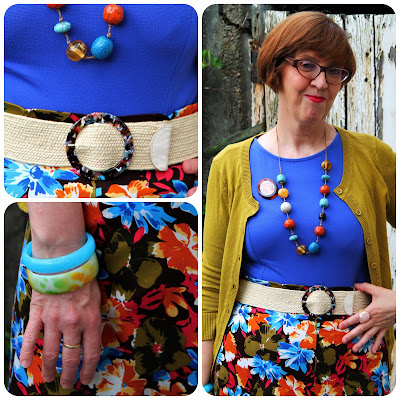 I was surprised to see that I only wore this skirt, found at Think Twice in February 2018, less than two months ago. With its symphony of olive, burnt orange, magenta and bright blue flowers, I could have picked any of these colours to accompany it, but often gravitate towards blue. This time, it found its perfect match in the blue of this three-quarter sleeved top, which was still airing after its last wear on the 1st of January!

The eagle-eyed among those who've clicked the link might have noticed that I was wearing the same necklace back then as well. The stretchy belt with its multi-coloured round plastic buckle is an old retail buy, as is the chartreuse cardigan. Both bangles were charity shop finds. 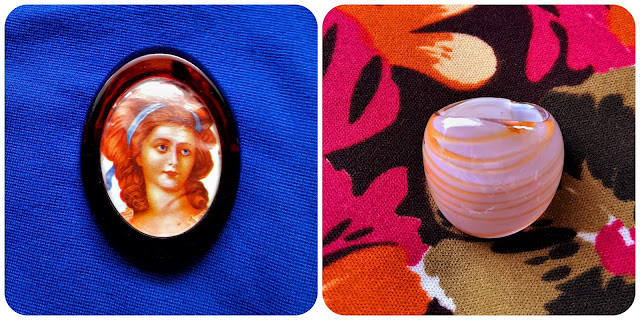 As neither of them were caught on camera properly, I made flat-lay close-ups of both the brooch and the ring. The brooch was picked up at an outdoor flea market. If I remember correctly, I only paid € 1 for it, and its cost per wear must be down to mere cents by now, as I have been wearing it quite a lot over the years. The glass ring was a high street buy. 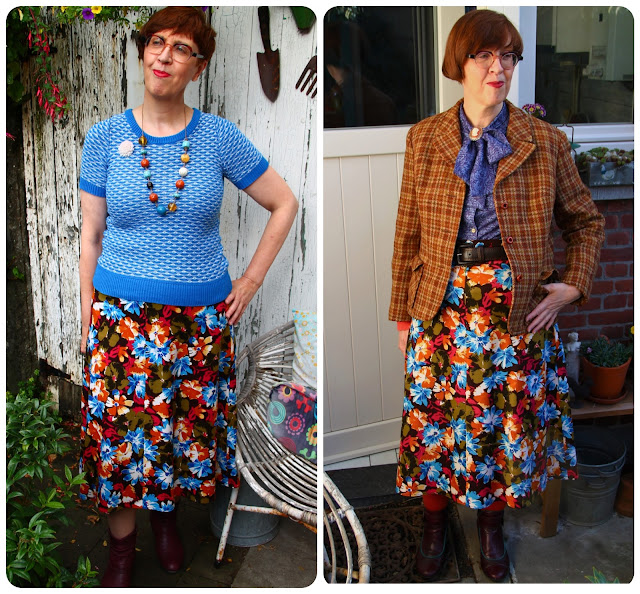 I'm doing a mini Sheila style flashback on the skirt here. There's only about five months between the two photos. Apart from confirming that indeed blue is often the skirt's companion colour,  I am struck by how much my hair has grown in that short space of time. The photo on the left dates from the 1st of October while the one on the right was taken at the end of February. I'd just been to the hairdresser's the day before on both occasions! 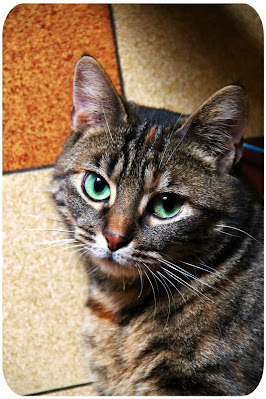 Obviously, I couldn't say goodbye for now without updating you on our lovely Bess's progress.
She is becoming more adventurous and affectionate by the minute. In fact, neither Phoebe nor her predecessor Poesie were ever as fond of petting as she is. Picture this: you have to go to the bathroom during the night and are being followed by a cat who constantly winds herself around your legs, then, purring loudly, lies herself down at your feet until you're finished, demanding cuddles at all times!
Look at that cute little face, and the rusty spot on top of her head. As this is where the petting first started, we are calling this her on/off button!
So, that's it for now. Until next time, please do stay healthy and happy!
Posted by Polyester Princess at 18:53