April come she will

Trawling through last April's blog posts in search of something in particular, I couldn't help but notice just how green and advanced the garden was this time last year. A steady string of bright sunny days combined with the novelty of only working two days a week guaranteed that a lot of our time was spent out there and that it was thriving like never before.

The balmy temperatures prompted the wearing of a bevy of short-sleeved frocks and tops, more often than not without the need of layering a cardi on top.

But what hit me the most was the general air of positivity exuding from my posts. How blissfully unaware we were of the fact that we would still be living with the virus and its consequences more than a year later! 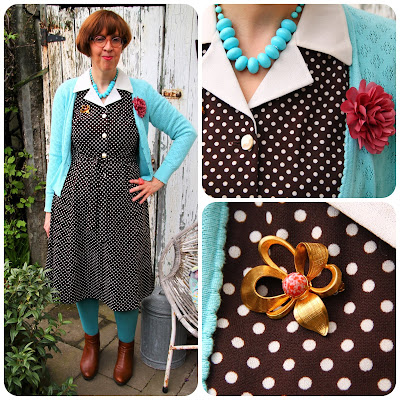 Now, if only the weather deities would stop conspiring against us and lighten our hearts with consistent true Spring weather!
It was mostly dry, with a mixture of clouds and sunshine and about 11°C, on Sunday the 11th of April. Although quite an improvement on Saturday's washout, the rain seemed to have washed away what was left of my energy levels, so that nothing too strenuous was on the menu that day.
After re-wearing Saturday's outfit for photographic evidence, this is what I changed into. 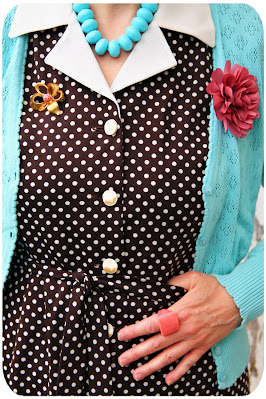 As far as I can remember, I hadn't worn this chocolate brown polka dot patterned Diolen dress with its solid white collar in years, so that Sunday's outing was long overdue.

I always seem to gravitate towards sky blue when it comes to accessorizing it, this time adding a charity shopped King Louie cardigan and beaded necklace, while the opaques I wore were a darker, turquoise-y shade of blue. My brooch, with its mottled red and white centre stone, was a flea market find, while both the rosewood flower corsage and peachy plastic ring were old retail buys. 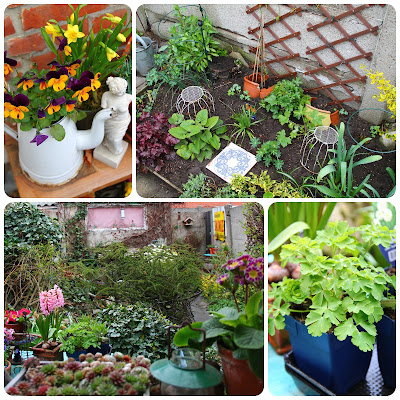 A stroll through the garden to inspect its progress revealed that it was doing very well indeed.

The newly planted perennials in the Clematis border seem to be rubbing along just fine with its older neighbours. As for the eponymous Clematis at the back, both are showing signs of life, although the white flowered one on the left appears to be a lot more enthusiastic than it lavender sister on the right. Strangely enough, the latter was the one which flowered profusely last year, while the white one remained completely flowerless. 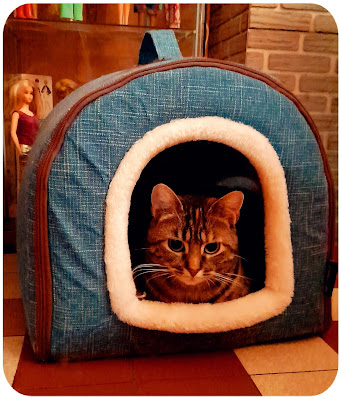 Bess, on the other hand, is thriving, and getting into her stride more and more with each passing day. Her latest thing was going into the Snooze Bay and knead its fleecy cushion while purring loudly. Often, her purring continued while she was around us, which obviously made our hearts melt. If we were worried about her not making any sounds when we first brought her home, she has definitely been making up for that in the last two weeks or so. 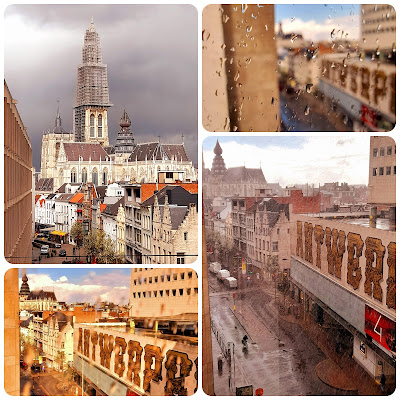 April returned to her usual fickle self on Monday. The day had gone off to a bright, sunny start, when all of a sudden, about mid-morning, I noticed the dark foreboding sky enveloping the cathedral's tower.

Minutes later the corner of Antwerp I can spy on from my office window was treated to an almost horizontal onslaught of sleety snow. Then, in the blink of an eye, the sun reappeared as if nothing had happened, leaving a trail of prism-like raindrops on the windows. 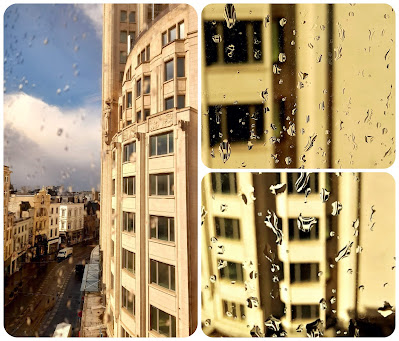 I WhatsApp'd a photo of Antwerp's weather conditions to Jos, who sent me the below photo in return. Apparently, back at home, the sun had tempted him outside to tackle a job which was long overdue and couldn't be postponed for much longer.

The bundle of branches is part of the remains of the Lilac tree which had been dominating our garden for many years. It had a magnificent winter-flowering Clematis armandii growing through it, but both of them had sadly died over the previous Winter, the Lilac finally succumbing as a result of all the weight it had been carrying over the years. 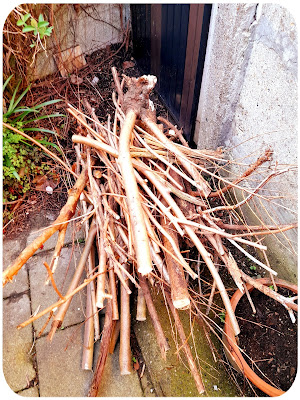 Tackling its dead wood had been one of Jos's first jobs last Spring, spurring along our garden's new lease of life. However, as we'd either been too late for April's garden waste collection - if there even was one during Lockdown 1 - we'd stacked up the wood in the area next to our garden bench, taking up a good chunk of valuable garden space, as you can seen in the below collage. 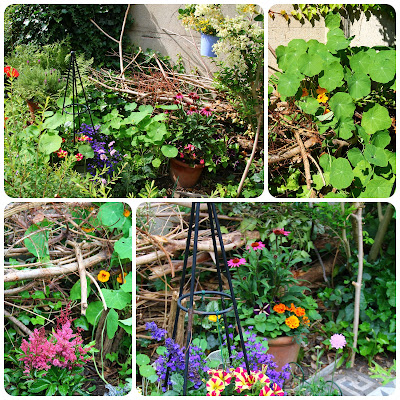 We did, however, make a feature of it by leading the infamous climbing Nasturtium into its direction, at one point covering it almost completely.

As Antwerp's wintry showers had reached Dove Cottage by now, Jos had to abandon his project. There wasn't any time left for procrastination though, as Spring's final garden waste collection would be on Friday! 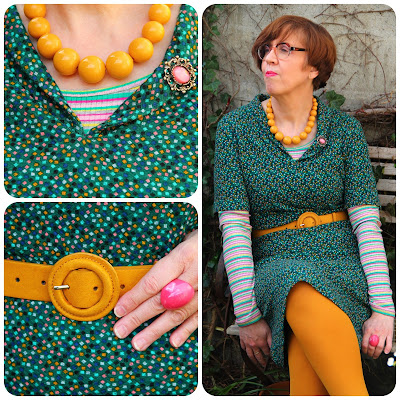 Fortunately, the next day, Tuesday, was a dry and sunny day, albeit still a bit too chilly for the time of year at barely above 10°C.

Thoroughly fed up with my long-sleeved frocks, I'd caught a peek of this short-sleeved one while making a start with my wardrobe changeover during the weekend.

Green-based and sprinkled with tiny dots in a multitude of colours, its fabric's weight was heavy enough to cope with the none too Springlike temperature, especially with a pink, yellow, green and grey long-sleeved top layered underneath. The dress itself holds bittersweet memories as I found it at Think Twice during a day trip to Bruges on Jos's birthday in September 2019. 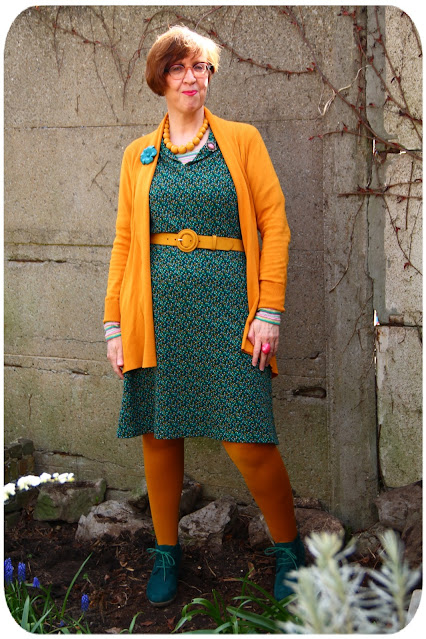 I took advantage of the mustard coloured spots in the dress to wear a belt, necklace and opaques in that colour, throwing on my long-line mustard cardigan for extra warmth. The dress's green background was echoed by the flower brooch pinned to my cardigan and the green wedge-heeled lace-up shoes which were a charity shop find back in January.

In the above photo, I am standing in the now cleared area where the remains of the Lilac tree had been. It did take quite a bit of back-breaking effort, but look at all that space we've created. In a tiny garden like ours, every inch definitely counts. We've also cleared a lot of the rampant ivy, creating even more space on the other side of the low wall visible in the photo on the top right. 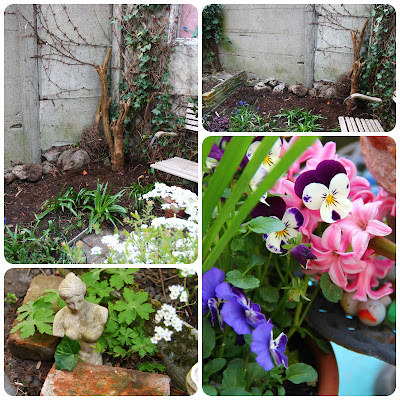 Wednesday was another uneventful office day on which the sun played an on and off game with the clouds. The day wouldn't even have been worthy of a mention if it hadn't ended in such wonderful way.
Bess had started following us - and Jos in particular - around in the evenings, rubbing her head against our legs and our outstretched hands. We weren't in a hurry to start petting her but that evening, when I tentatively put my fingers on top of her head, she let me be and even allowed me to stroke her. This act must have unleashed a well of pent-up need from her side, as ever since then she is constantly clamouring for cuddles, purring loudly at the merest touch. 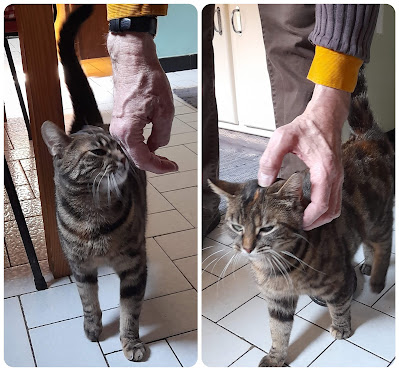 A sunny start to the day again on Thursday, but the temperature had dropped to a chilly 9°C at the very utmost.
After our usual non-office day fruit & yoghurt breakfast and Jos's return from his daily trip to the newsagent's, we drove to the garden centre. I was reasonably busy for a weekday, with people prematurely buying annuals and bedding plants in spite of the risk of overnight frost. 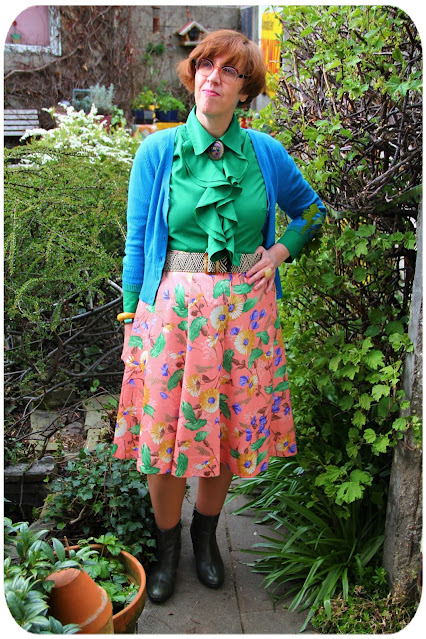 While I was making a couple of wardrobe changes, I happened upon this emerald green blouse, charity shopped a couple of years ago. It is long-sleeved and apart from its ruffle placket, it also came with a removable bow tie which went through a loop at the back of its neck. Too much of a good thing, I  actually removed it when I got it home, and it got promptly mislaid. Instead, I added a brooch at its neckline. 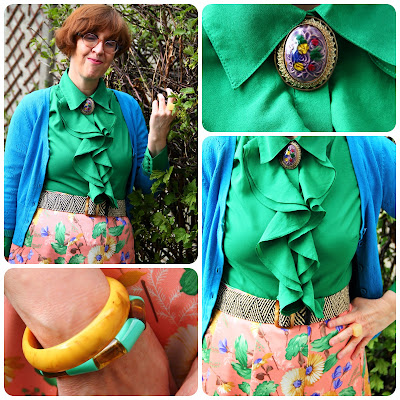 The blouse's companion for the day was this pink skirt patterned with yellow, blue and emerald green flowers. The blue in the skirt was represented by a cardigan in a similar shade. And yes, I am wearing nylons (brr, a bit too chilly!) and opted yet again for my green wedge-heeled ankle boots.

Further accessories were yellow and green hued bangles and one of my stretchy chevron patterned belts. 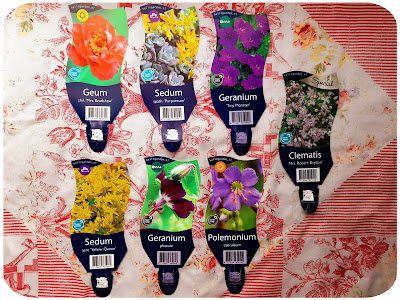 By the time we made it to the garden centre, the sun had disappeared and rain seemed imminent.

Nevertheless, we braved the inclement weather by browsing their outside tables of perennials, again taking advantage of their ongoing buy 5 get one free promotion.

We bought two varieties of Sedum, Geum chiloense ‘Mrs. Bradshaw’, Geranium phaeum, Geranium ‘Tiny Monster' and Polemonium caeruleum or Jacob's Ladder. Not included in the promotion was Clematis jouiniana ‘Mrs. Robert Brydon’, which is a herbaceous Clematis rather than a climber. 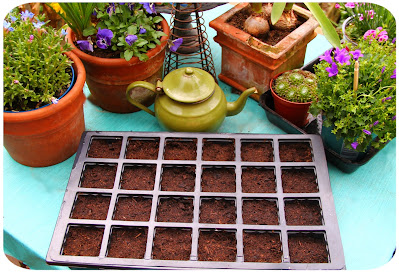 After lunch, I reluctantly donned gardening apron and gloves for a stint of gardening in spite of the uninviting greyness of the afternoon. I'd hardly made it outside when the sun joined me.

I decided to make a start with sowing the Nasturtium seeds, using a plastic tray with individual pots I discovered at the back of the potting shed. It has a transparent lid to shield the contents from frost.

That done, I weeded a small area at the front of the garden, where Lily-of-the-Valley and Alliums happily share space. There, I sprinkled some of the California Poppy seeds, sieved a layer of compost over them and gave them my blessing!

A return of the clouds and a painful finger - more about that in a later post - drove me inside again, leaving the rest of the endless but enjoyable gardening tasks for another day.

And with that, I bid you goodbye for now. As always, do stay safe, sane and fabulous out there!