Just what the doctor ordered

Birthday celebrations aren't everybody's cup of tea. Some people go all out year after year, having parties or at least a get-together with loved ones involving cake, perhaps, and oodles of presents, while others ... don't. Personally, I am in the latter category, preferring to treat it as just another day, especially when it falls on a weekday and I have to work, at most doing something with just the two of us.

Now, milestone birthdays are something else entirely. But what if they occur in pandemic times? And I'm not talking about my own birthday which, although a milestone one, will only be in September.

No, this birthday in question belongs to my lovely blogging friend, Kezzie, who is celebrating her 40th birthday end of this month. And as her options are quite limited, she has asked us for assistance in organizing an online fancy dress party based on the characters of Dr. Who. She is a great fan of the series and engages in cosplay based on the iconic TV series on a weekly basis, published as TARDIS Tuesday on her blog. 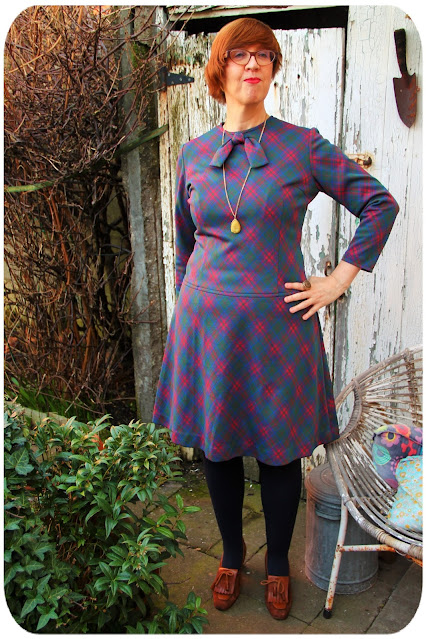 Not knowing the first thing about Dr. Who, apart from the fact that it involves a time-travelling space ship called the TARDIS, a lot of head-scratching ensued from my side.  Turning to Kezzie's blog was therefore the obvious starting point and, as she often cosplays Clara Oswald, who was a companion of the Eleventh and Twelfth Doctors, I thought I might as well have a look at her outfits. Thus Dr. Google was consulted and when my eye was caught by Clara wearing a tartan dress, I knew I could do something similar. It's from an episode called The Name of the Doctor.

Now my dress, which is vintage and has been in my wardrobe forever, isn't quite the same as Clara's. The colours of the tartan are different, it has a bow at its neckline, and it has long sleeves rather than short. Initially, it had a collar and cuffs which at one point must have been white but had slightly yellowed with age. When I removed them (one of the cuffs had a rather unsightly and persistent stain), I discovered that they weren't original to the dress anyway. 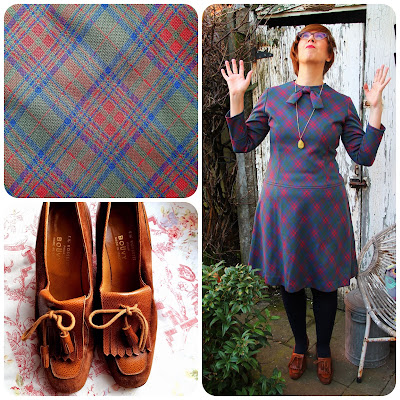 Like Clara, I wore the dress with a pair of black opaques and I added a chain necklace from my collection. Seeing Clara's rather covetable shoes, I racked my brain until I remembered this posh pair of Italian made vintage loafers, which were a lucky charity shop find back in October 2017.

Obviously, I'm not Clara's younger self, but a future Clara she meets on her travels with the doctor to a strange time when the world is in the grip of a pandemic, the virus having wiped out all hairdressers. Pure Science Fiction! 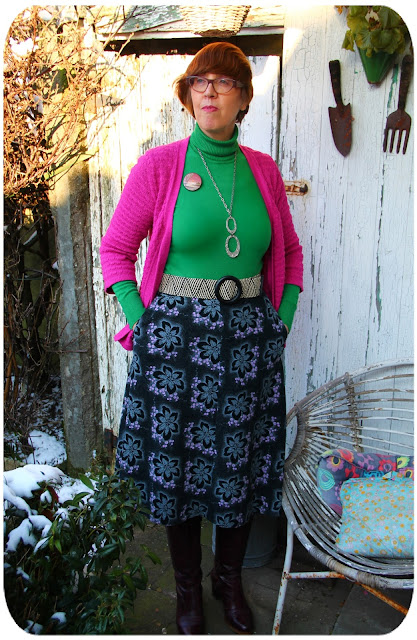 Phew, I'm pretty exhausted by all that time travelling, so I think I'll stay here for a while, at the end of February's second week.

We had reached Friday, the 12th of February by now, and we were still in the throws of our cold wave, the sub-zero temperatures now joined by a fierce and icy wind, with the brightly shining sun our only salvation.

I had shunned my few remaining polo necks for many years, as the mere thought of wearing them made menopausal me break out in a sweat. But when I spied this green one in the bag of cold weather clothes living inside our linen chest, I decided to give it another go. 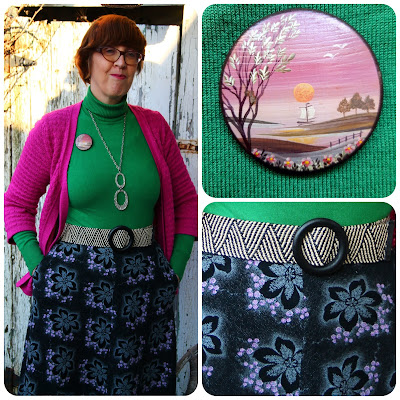 The grey and pink floral velvet skirt was a charity shop find from the other week which apparently I forgot to tell you about. This was such a joy to wear!

I wore a pink tie-neck cardigan on top, accented my waist with one of my favourite zig-zag belts, and accessorized the polo neck with a pink seascape brooch and a 1960s style silver tone necklace. 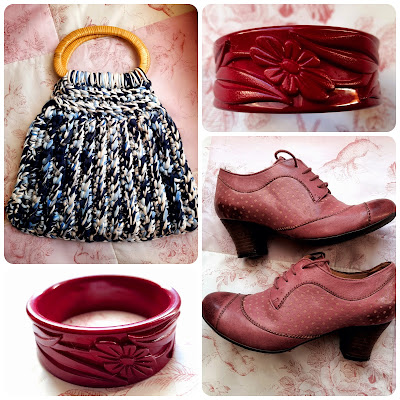 Friday has replaced our pre-Covid Saturday charity shopping day, and that day, we visited not one but two shops, which yielded quite a few finds.

Pickings were meagre but still more than worthwhile in the first shop, where I found a scrap tote bag with bamboo covered handles, a pair of blush pink retro style shoes and a heavy carved bangle which is possibly Bakelite. 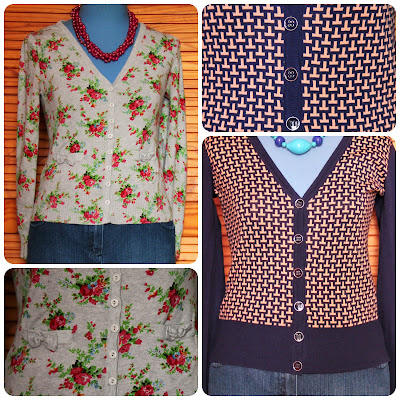 The two cardigans came from the second shop, the floral one being yet another King Louie one.

This is one of the smaller shops - but still bigger than the average UK charity shop by comparison - and can be a bit hit or miss. I can list lots of fabulous things found here over the year (the shoes I wore to cosplay Clara, and the Astrakhan jacket I'm wearing later in this post, are prime examples), but we often come away from the shop empty handed as well. 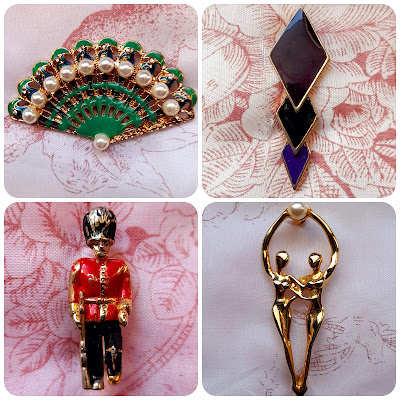 Their jewellery cabinet has more than once been the source of some lovely additions to my brooch collection. In fact, the majority of my charity shopped brooches were picked up here, so it's always worth having a look. This time, there were no less than four which tickled my fancy.

Isn't that green pearly fan adorable? I suspect that the tiny Queen's Guard wearing his bearskin hat must be a London souvenir brooch. Vintage souvenir brooches are a particular weakness of mine. 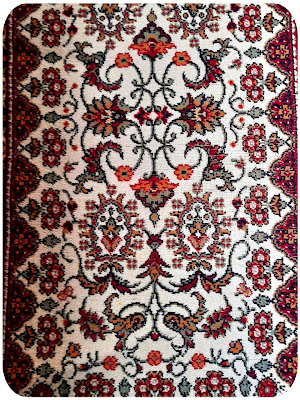 Our final find of the day was this gorgeous rug. We were on the lookout for one, never expecting to find something suitable so soon in our search.

Initially it was meant for our spare room where, due to Phoebe's bladder problem about 7 years ago, our vet advised us to install a second litter box. With space at a premium, we managed to wedge it in a rather awkward space just beyond Jos's wardrobe. Now that we got rid of the box, we thought it would be nice to have a rug in front of the wardrobe.

We had a change of plan when we got it home, however, replacing the rug in the dining area of our kitchen with this one and putting the old kitchen rag rug upstairs. 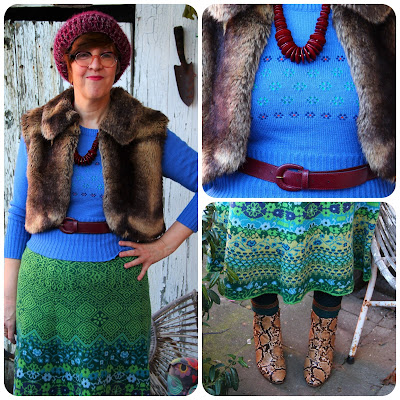 After a particularly frosty night, it was still -6°C when we were having our final fruit and yoghurt breakfast of the week on Saturday morning.

The sun was still out in full force, so we’d planned a walk for the afternoon.

The continued deep freeze temperatures prompted the wearing of yet another jumper, this time a blue vintage one which has three rows of ajour flowers caught between two rows of tiny red hearted daisies. 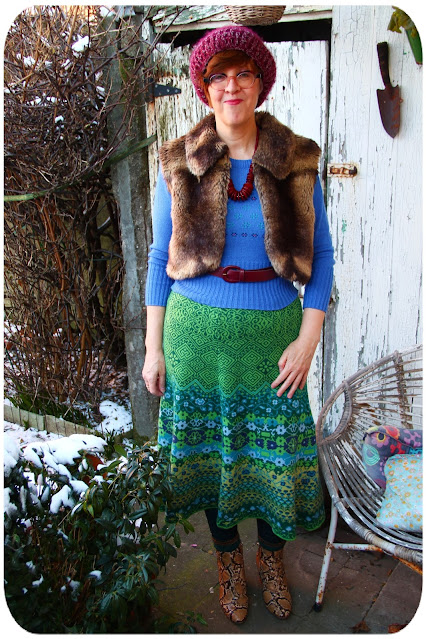 As I was planning to wear my butterscotch Astrakhan jacket for our walk, keeping my bottom half warm and toasty as well was a priority. So, out came this wool knit skirt with its gorgeous blue and green jacquard pattern, found at Think Twice back in November 2019.
Touches of burgundy were added in the form of my belt, necklace and beret. I was wearing 120 den bottle green opaques, on top of which I put on a pair of thick grey knee socks when we got ready for our walk.
At that time, I also replaced my furry waistcoat with a chunky knit cardigan and my ankle boots (with which I'm joining Beate's and Vix's sisterhood of the fake snakeskin ankle boots) with my hard-working snow boots. 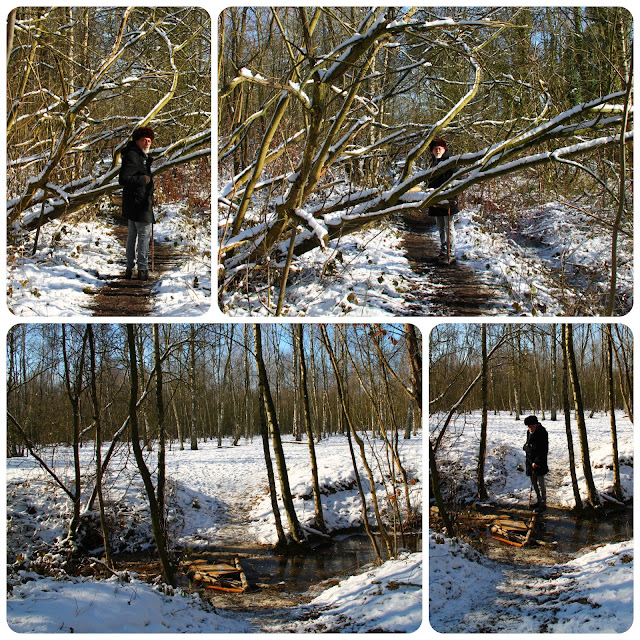 Trying to avoid crowded places as much as possible, it isn't often that we go for a ramble during the weekends, as walking seems to have become a favourite national pastime during the pandemic.
However, as this would be our last chance of trampling through snow, we thought long and hard and decided to go to Jos's old stamping ground, the nature reserve established on the clay pit which was still very much a hive of activity when he was growing up.
Muddy and quite impassable after weeks of rain, the sticky mud was now blanketed with a generous layer of snow and most of the treacherous puddles were frozen solid. Still, toppled trees and half-sunken creek crossings did our best  - but did not succeed - to waylay us. 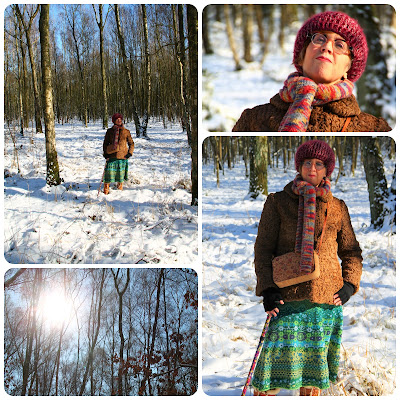 Again, we initially only met a handful of people, and were in fact quite surprised there were hardly any children adventurous enough to make use of the reserve's sledge-worthy inclines.

It was only on our way back that we met several small groups of people approaching us from the opposite direction. They were generally well behaved, even if it was yet again mostly up to us to step aside until they'd passed. 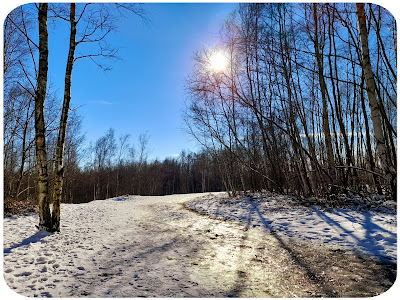 The sun was a bright orb in an almost cloudless blue sky, casting a sparkling glow upon the carpet of rock solid snow.

Thaw set in, slowly but surely, on Sunday, when the mercury climbed to +5°C by mid-afternoon. Decidedly balmy after a week's worth of sub-zero temperatures, I was able to go out into the garden in just my dress without freezing to death. 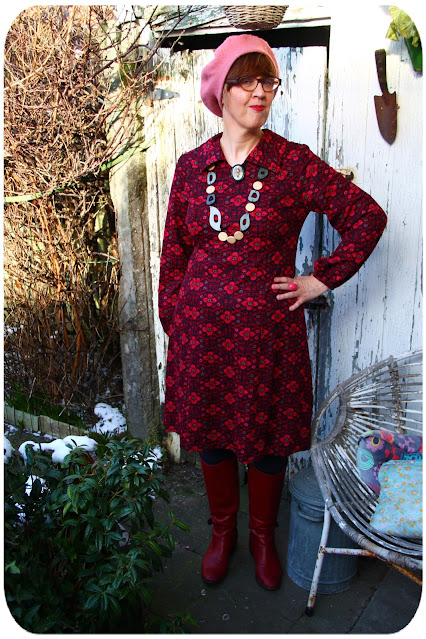 My 1960s red and grey floral shift dress is lightweight and unlined, and thus required a full slip worn underneath.  I combined it with a pair of 120 den slate grey opaques, the grey echoed in my chunky wooden necklace. My oval floral brooch acted as a cameo pinned at my dress's collar.

The low-heeled tall red boots were a flea market find in October 2018. 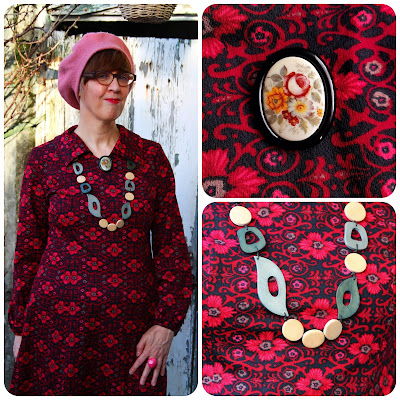 That afternoon, we were in the mood for a spot of baking. Nothing to elaborate though, but a tried and tested recipe for what the booklet is calling a scone cake.

The original recipe features apples, orange zest and blackberries, although we replaced the latter by blueberries this time. In fact, you can use any soft fruit you fancy. 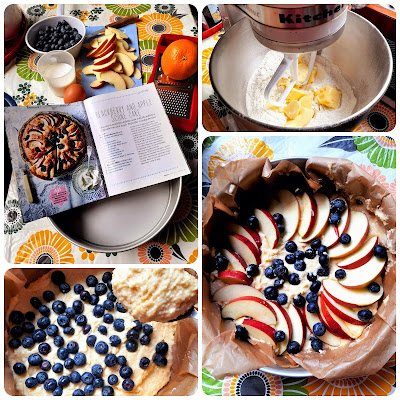 I'm not even sure my Dad ever made use of it, even though he had made quite a bit of an effort to get hold of one.

After having had a newspaper subscription for many years, he was outraged by an ad in said paper offering the food processor to new subscribers for next to nothing. Dismayed, he phoned the newspaper and stated his case. He must have been very convincing, as they agreed to let him to make use of the offer. He was quite a character, my Dad! 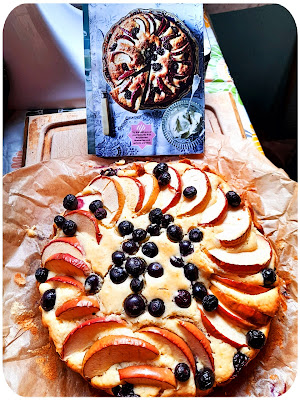 We couldn't wait for the cake to cool down, and had a piece each almost straight from the oven!

We would be moving from harsh Winter conditions to temperatures reminiscent of early Summer in just a matter of days. But that, my dears, will be for a next post.

One thing is for sure, Spring is well and truly on its way. Do stay safe, sane and sensational!