Yes, I know I am late to the party, as every last trace of the Winter Wonderland we were treated to in the second week of February has long gone by now. In fact, Winter was replaced by Spring almost overnight in the last couple of days, the temperatures soaring to unheard of heights for the time of year.

Before the big meltdown, however, I'm taking you back to the deep freeze we found ourselves living in that week.

Saturday's snowfall was briefly interrupted on Sunday, but the sub-zero temperatures - we were down to -5°C and less in the daytime - had turned the carpet of snow into solid ice by Monday morning, transforming  streets and pavements into a giant ice skating rink.

Fortunately, most of our neighbours had done their snow clearing duties on Sunday, so that we managed to make it to the garage without sustaining injuries, and as all major roads had been gritted, driving into Antwerp wasn't the arduous journey we'd initially feared.

Powdery snow fell from a slate grey sky all through Monday, the sky matching my mood after the weekend's ordeal, but work was relentless and thus a blessing in disguise. 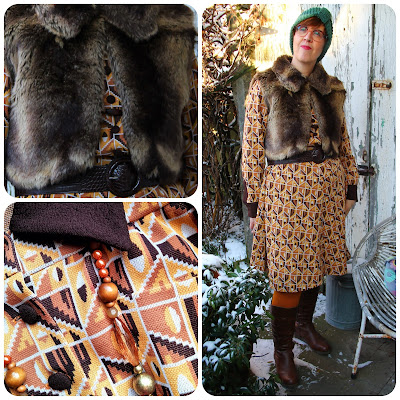 My heart leapt for joy when I drew the curtains to bright sunshine on Tuesday morning, even though she was no match for the -7°C the day had in store for us.

We had no plans for the day other than being gentle with our battered souls, so my first task after our usual fruit & yoghurt breakfast was a pleasurable one, picking out my outfit for the day.

A rummage through the linen chest unearthed this textured polyester dress which for lack of space was still languishing inside its out-of-season vacuum bag. 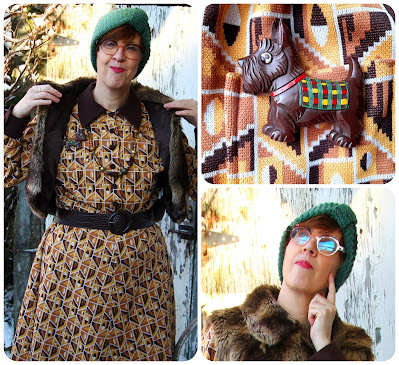 Yet another € 2 Think Twice sales bargain, I fell in love with its groovy print of yellows and browns - once likened to a variety box of chocolates by Jos - which is joined by a solid brown collar and ditto cuffs and buttons. A brown round-buckled snakeskin patterned belt was added at my waist, and a vintage Scottie dog brooch pinned to the dress's bodice. Other accessories were a wood, plastic and metal beaded necklace, and a green crochet turban - a handmade gift from my friend Inneke - to keep my ears warm and my hair in check.

Further warmth was provided by a faux fur collared waistcoat (an ancient high street buy), burnt orange opaques and the chocolate brown boots which kick-started my recent luck at the charity shops in that department. 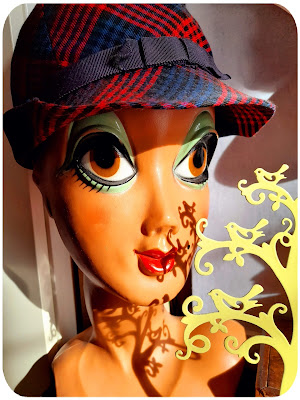 While Jos went to the newsagent's and replenished the bird feeders, I repaired a torn seam in the blouse I’d been wearing the previous week, did some light dusting in the hallway and marvelled at the sunlight streaming in through our spare room windows, casting a bird and curlicue pattern on Twiggy's face. 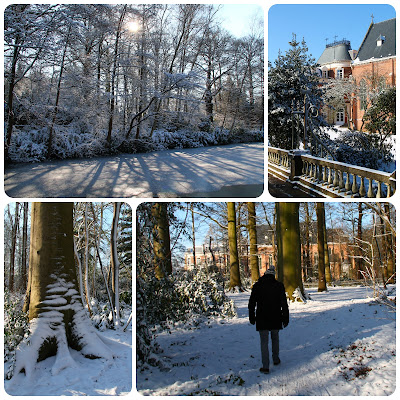 After lunch, the continuing sunshine lured us outside for a stroll through the local park.
This was easier said than done, as it required adding layers.
I started by replacing the full slip I was wearing underneath the dress by one with a cozy flannel lining. When I was putting my dress back on, one of its buttons popped off and rolled under the linen chest where it hid in its dark depths.  Aided by a torch, we eventually managed to locate and retrieve it, so that I was able to sew it back in place.
I added a chunky cardigan on top, and replaced my 60 den opaques by a pair of fleece-lined ones Kezzie sent me a couple of years ago, putting an extra pair of socks on top before donning my snow boots. 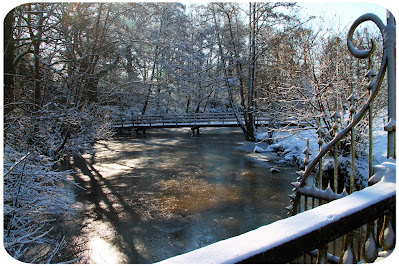 The park is only a leisurely 10 minute stroll from Dove Cottage but might have taken just that little bit longer as some of the pavements weren't cleared and thus in a slippery state.

Without the aid of our walking sticks, which we keep in the boot of our car, we had to tread carefully, not just en route but also in the park itself, where we found that our best option was to stick to the carpet of snow instead of walking on the designated paths. 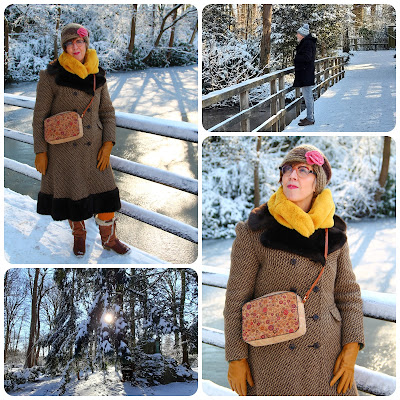 My Princess coat was joined by my woolly turban, still adorned with the flower corsage I pinned to it in January, a fluffy yellow eternity scarf and a pair of ochre leather gloves.

My new-to-me cross-body cork bag has already more than proved its worth, as it has been on constant rotation when out and about on non-office days ever since I brought it home about a month ago. It's just big enough for my purse, mask case, bottle of hand sanitizer and phone. 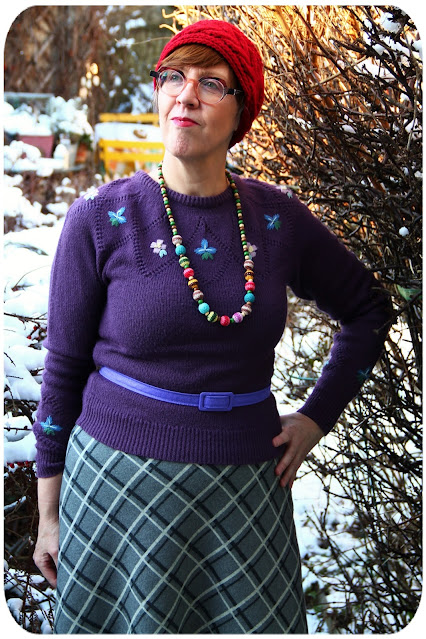 It was still bitterly cold on Wednesday, which was a reasonably quiet office day for once. There's nothing of note to tell you about it, except perhaps for the fact that the days are noticeable lengthening. While there was still a trace of lingering darkness in the sky when we left home that morning, we were able to drive home in broad daylight.

The sun was doing overtime that week, as she was still gracing us with her presence on Thursday, and would continue to do so for the rest of the week. 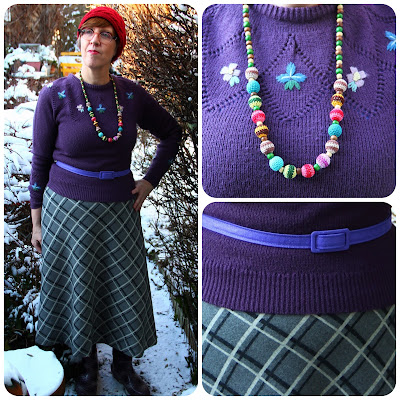 At the same time, there was still no sign of any improvement in temperature, so that my warmest Winter clothes continued to have their work cut out.

I last wore this plaid woollen skirt for a rare meet-up with friends back in January. There are similarities too with the jumper I wore back then, although the embroidered flowers on this purple one aren't nearly as elaborate. Same as in the January outfit, I defined my waist by belting the jumper, the mauve fabric belt in question again belonging to one of my dresses.

I'm sure the necklace with its crochet covered beads needs no further introduction, as I've been wearing it a lot lately.

My red knitted headband is fleece-lined and was an emergency purchase while on holiday in Zeeland in November 2019. 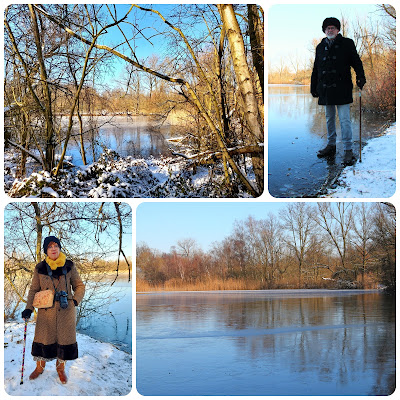 As Thursday had been heralded as one of the week's best days, we'd planned a longer walk in one of the ex-clay pit nature reserves in the area, Walenhoek, which is about 10 kilometers from where we live.
One of our old walking haunts, illegal fishing and subsequent barbecuing, and the inevitable littering which followed in their wake, had kept us away for many years. In fact, we only just started going there again last Summer, when we found things much improved.
The lake which we'd used as a backdrop for outfit photos back in July, with me wearing a sleeveless cotton Summer dress, was now frozen solid, as demonstrated by Jos on the top right. I fully admit that I wasn't brave enough to walk on water, not even for half a minute. 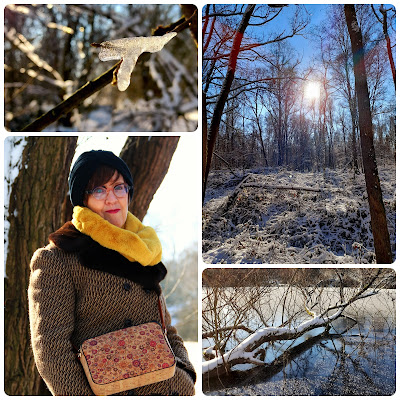 I'd swapped Tuesday's turban for a plain black one, which I wore on top of the fleece-lined headband. Instead of my leather gloves, I wore black knitted sleeveless ones, which made photography quite a bit easier. 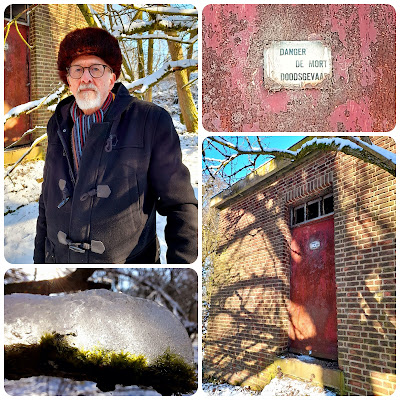 As the reserve is established on the site of an abandoned clay pit, there's the odd relic from the past hidden among the wilderness, poignant remnants from its working heyday.
This industrial ruin, with its picturesquely peeling and rusty red door, is an old electricity cabin, a fact which is given away by its bilingual - French and Flemish - danger of death warning. 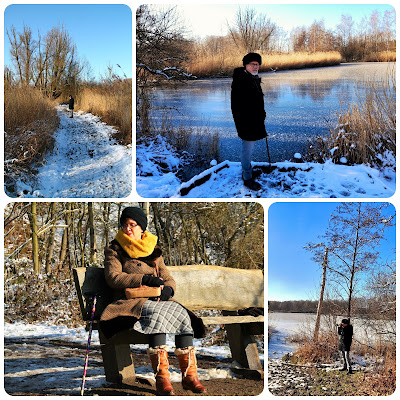 Initially we hardly met a soul apart from the odd dog walker or couple making the most of this gorgeously sunny day like we did. However, about half-way through our circuit, peace and quiet was disrupted by the arrival of a rather noisy group of children accompanied by their teacher, which made us flee along a path we'd never walked before. Here, the rutted clay was frozen solid which didn't make for easy walking, although I can imagine the mud reigning here at other times would be much worse and would probably have made us turn heel. 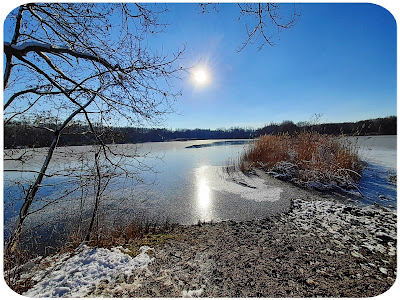 The track merged with one of the main paths skirting the domain. At one point, there is a tiny peninsula jutting into the largest of the lakes, with a very covetable bench set at its edge. We couldn't believe our luck when we found the bench empty for once - a first! - and what's more, as it was in full sunshine, it was completely dry.

We sat there for a good 15 minutes, basking in the sun's warmth and admiring the magnificent lakescape in front of us, the sunlight bouncing off the half frozen lake almost blinding us. And no, my feet didn't reach the ground, a fact which Jos seemed to find hilarious. 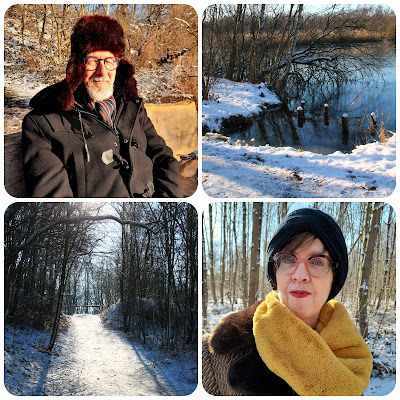 By now, I'm sure you've noticed the fabulous fur hat Jos was wearing. It was a gift from one of his former colleagues, who brought it back from China about 35 years ago. It's a trapper style hat with ear covering flaps that can be tied up on top. Isn't it wonderful?

With our reasonably mild winters, it has been many a year since it has last come out of hiding, and I don't think it has ever made it to my blog. 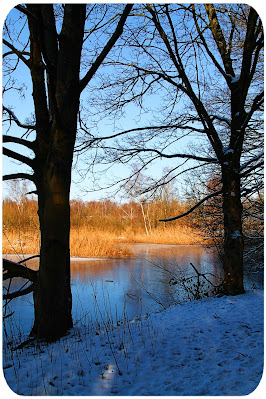 After an hour or two we arrived back at the car park feeling refreshed in body and soul.
There would be two more days of sub-zero temperatures in store for us, after which the mercury climbed rapidly, and thaw set in. But that will be for next time.
Until then, as always, I'm imploring you to stay safe, sane and fabulous!
Posted by Polyester Princess at 19:13