A cat-shaped hole in our hearts

This post was originally scheduled to be published on Saturday. In fact, it was all but written when tragedy struck. Yesterday, sadly, and very unexpectedly, we had to say goodbye to our beloved little black monster, Phoebe. We are utterly heartbroken and left with a huge cat-shaped hole in our hearts. The pain is still very raw and I'm still red-eyed from crying non-stop yesterday. 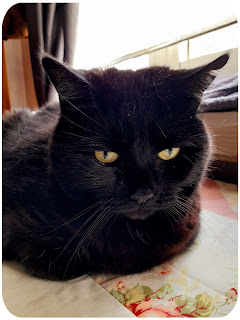 Phoebe had been acting a bit lethargic lately and since the beginning of the week she was clearly off her food. Since having been diagnosed with a bladder stone 7 years ago, she'd been on a diet, and we initially suspected she was bored with being served the same old food day after day. A similar thing happened with our previous cat, and as Phoebe was still enthusiastic about her Dreamies and gladly accepted our offers of a saucer of tuna or chicken, we called the vet who suggested switching to regular cat food for a couple of days. We did and she started eating at once. Problem solved, or so we thought. 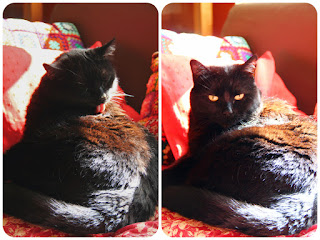 However, she remained lethargic, and the smallest thing seemed to take her a lot of effort. Then we noticed that her belly had started bloating considerably. An appointment at the vet's was made for Saturday. She was supposed to have blood tests, but when the vet spotted Phoebe's belly, which she soon determined was full of fluids, our suspicions were confirmed that things were very wrong indeed. The fluids were either caused by a virus or by a tumour, both of which would be incurable. The decision to let her go was made with our heads while our hearts cried bitter tears.

But life goes on, so in spite of everything, I decided to leave the rest of my post as it was originally intended, even if its tone is somewhat at odds with the recent happenings.

At the end of my previous post, I left you with a garden magically transformed into a Winter wonderland.  The snow's visit was a fleeting one. It didn't even stay for dinner as it started thawing almost straight away so that by Sunday morning, the 17th of January, hardly a trace of it was left.

After a night filled with weird dreams - they'd virtually stopped but have lately started again - I was delighted to wake up to a bright day, the January sun only diffused by a light veil of innocent clouds.

I had a blog post to write in readiness for that night's publication so, after our usual Sunday breakfast of bacon and eggs, I traipsed upstairs and started typing like mad. With that task out of the way, we had a lunch of bread and cheese, during which we discussed plans for the afternoon. 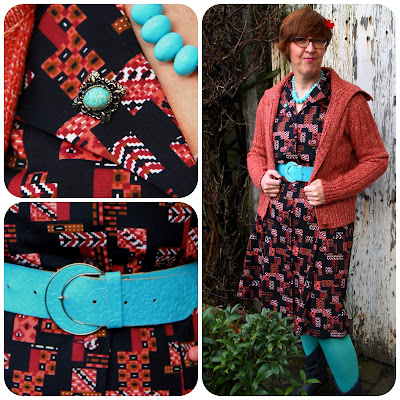 In the meantime, why don't I show you what I was wearing that day?

The starting point of my outfit was a black button-through vintage dress with a patchwork pattern in hues of rusts and browns, with a dash of white thrown in for good measure. 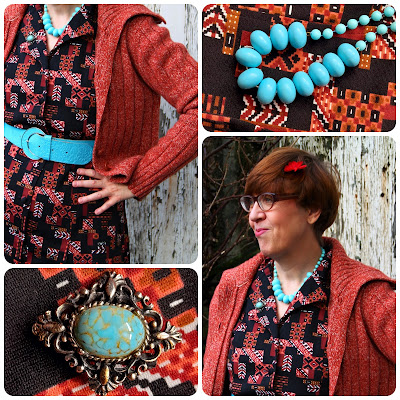 For contrast, I used turquoise for my accessories, which included a textured leather belt, one of my vintage beaded necklaces and a silver-tone brooch with a centre stone threaded with ochre. It almost goes without saying that my opaques were a bright turquoise as well! My wide-collared cardigan, its colour tying in with the rusts in my dress's print, was added for warmth.
The red flower in my hair is real and belongs to our still exuberantly flowering red Geranium. The poor thing almost got trampled beneath my feet. I picked it up and put in my hair where it stubbornly managed to stay put all through our outfit photo session. 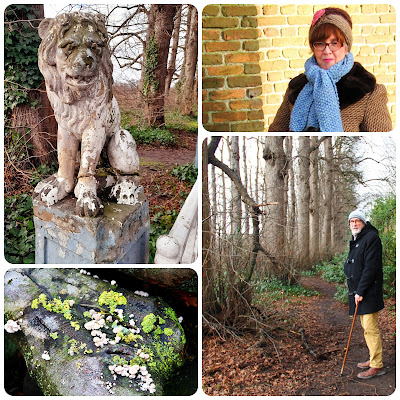 Jos's weather app said it would remain dry for the rest of the day, so we dressed up warmly and drove to our neighbouring village for a walk. Our ultimate destination was Hof ter Linden, a domain surrounding a Neoclassical manor house.

Like the sculpture park, it is somewhere I have taken you several times before, the first time in the early Autumn of 2016, shortly after my Dad passed away. The walk we did back then was in his honour, as the woodlands surrounding the manor house - known locally as the castle - were part of his playground when he was a young boy during the Second World War. 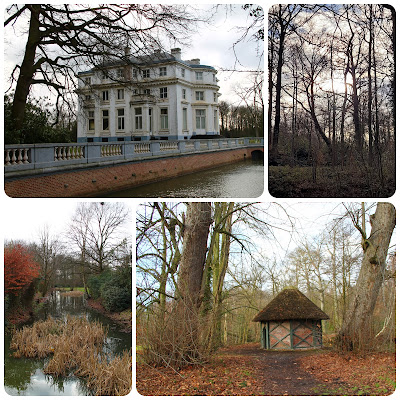 Initially, I wasn’t in the mood at all. I was cold in spite of my Princess coat, turban hat and chunky knit scarf, especially as I'd forgotten to bring gloves. Not surprisingly, this being a sunlit Sunday, it was reasonably crowded in the avenue leading up to the castle courtyard. The paths beyond it were quite muddy which made them hard to negotiate, but once we'd taken the first hurdle, the Sunday strollers had dwindled to a handful of hardy ones, which is when I started to enjoy myself. 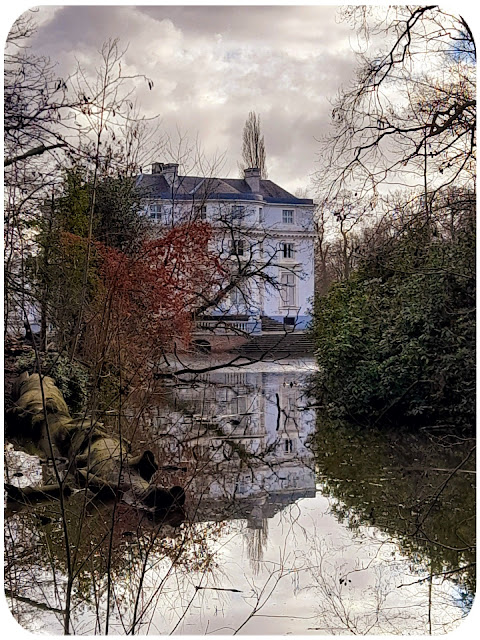 We proceeded to circle the lake which lies at the back of the castle and which, unhindered by exuberant foliage at this time of year, offered plenty of photo opportunities.

Victims of storms past lay slain, having toppled face first into the shallow waters at the edge of the lake, adding an otherworldly presence to its perfect stillness. Clouds had gathered to add further menace. 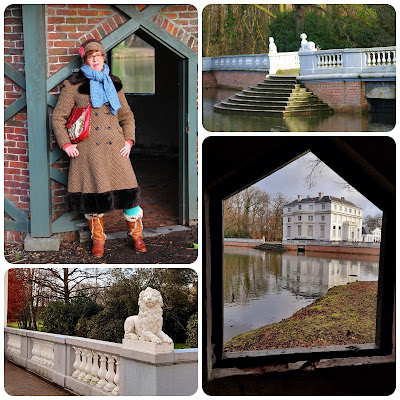 At one point, the quiet was pierced by the shrieking of birds whose silhouettes could be seen flitting from branch to branch high up in the canopy directly above us. 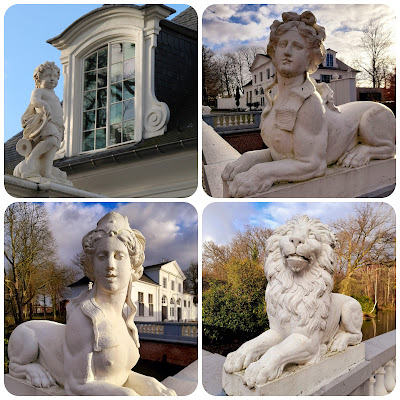 Once back at the castle, the layer of clouds shifted, revealing a canvas of bright blue in which white, powder puff clouds floated, propelled along by a gentle breeze.

Brilliant sunshine warmed up body and soul in equal measure.  The resident sphinxes and lions seemed to be stretching their limbs and tilting their heads heavenwards to bask in the sun's soothing rays. 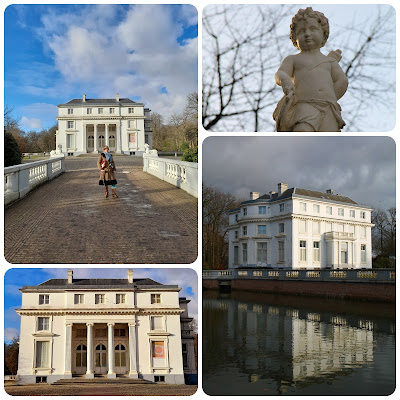 I'm so glad we made the effort, we sighed to each other once or twice. All traces of the Sunday blues had evaporated and the last of the cobwebs removed from the furthest corners of our souls. 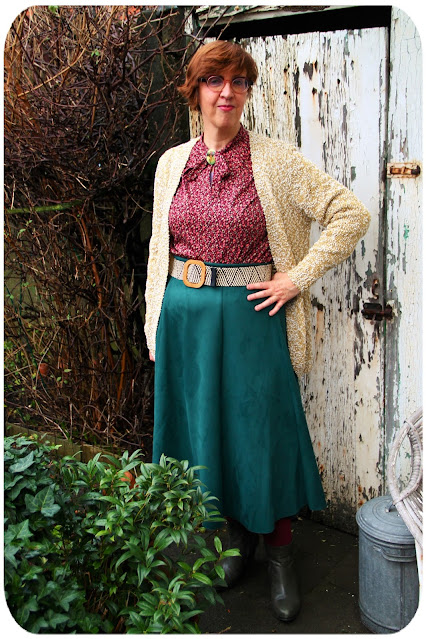 We were ready for another week and after skipping Monday's office day - a grey and dismal affair as befits Blue Monday - we had now arrived on Tuesday.

Once again, we woke up to the rain lashing against our bedroom window. This rather solved my dilemma of whether to walk into the village to run an errand.

Instead, after a morning's pottering, washing my hair and fiddling with collages for the blog, we went for a charity shop rummage after lunch. 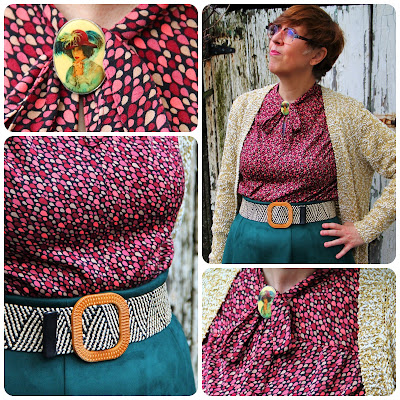 My outfit of the day consisted of a bottle green faux suede midi skirt picked up in last year's Winter sale, which I combined with a recently charity shopped vintage pussy bow blouse. The blouse's bow was fastened with a vintage scarf clip. I'm sure the belt does not need any introduction as it, and its two siblings, are habitués of the blog. 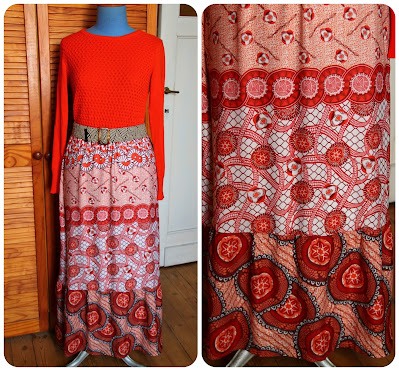 We drove down to the pop-up charity shop on the outskirts of Lier again where, after negotiating the car park's muddy puddles, I spent a happy half-an-hour or so browsing for treasures.
My hunt for jumpers was rewarded with this orange one, and what are the odds of finding a matching groovilicious maxi skirt in the same shop? 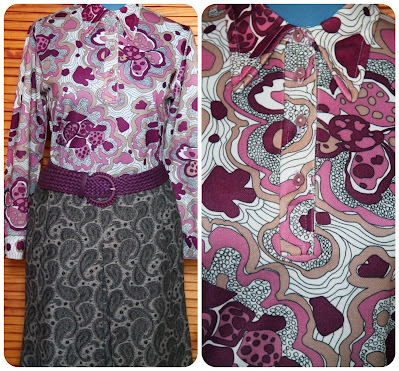 Trawling the rails of tops, my eyes alighted on this vintage psychedelic polyester shirt in hues of purples and pinks, and a modern long-sleeved top with a floral print in similar hues.

I thought both looked a treat combined with my grey woollen Paisley patterned skirt, which is long overdue an outing. 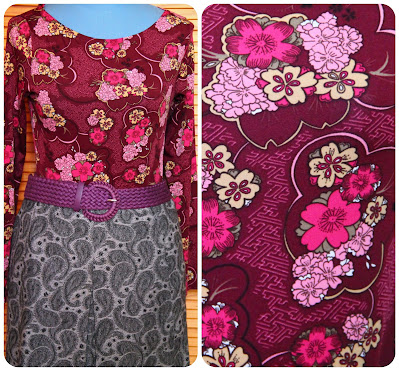 And it's clear I'm on a boot roll, as yet again I was in luck and found a pair of blue Western style mid-calf boots! 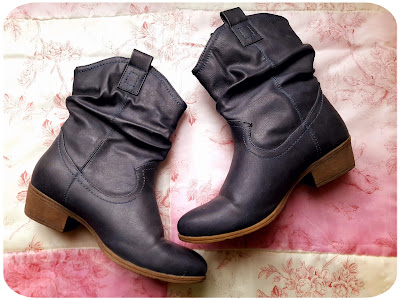 After taking the hurdle of Wednesday's office day - a grey, rainy and windy day - we made it to Thursday and the start of another 4-day weekend.

The stormy weather had subsided overnight, leaving us with a dry day for a change and a moderately mild temperature of 11°C. 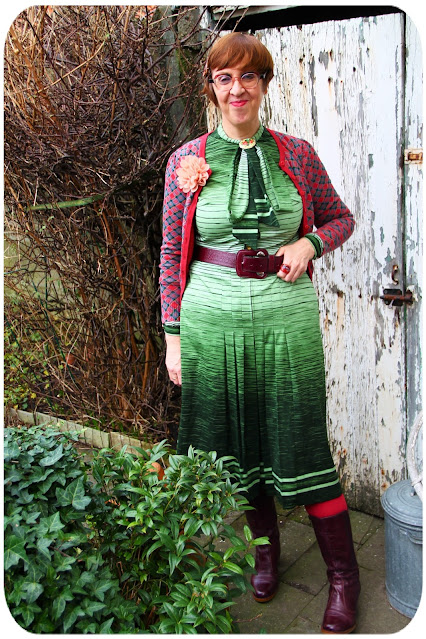 It had been a while - my blog says February 2020 - since I wore this green ombre effect vintage dress, with its neat row of pleats and pussy bow.

I usually wear it with pink so my raspberry pink opaques were the obvious choice. Looking back, it turns out that this was the only similarity with last year's outfit. 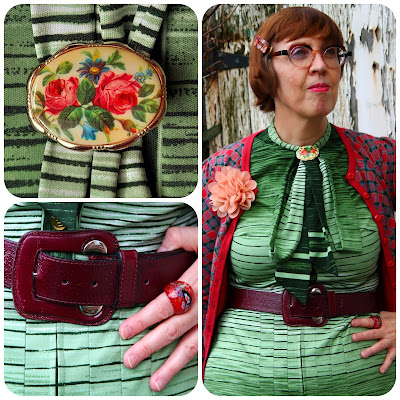 Again, I secured the pussy bow with one of my scarf clips, this time opting for a floral one featuring pink roses, a pre-blog flea market find.

Instead of taking the easy way out and add more pink, I opted for a burgundy belt with a massive buckle and a plaid patterned King Louie cardigan (charity shopped, obviously) in rose red and grey. To this, I pinned a pale pink flower corsage. 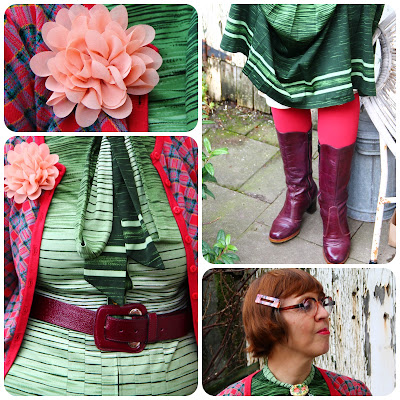 After breakfast, I ran the errand I postponed on Tuesday, buying shampoo and a selection of hair clips to deal with the Corona hair. It's been three months since my last haircut - four since my last colour - and it is simply driving me nuts.

The rest of the day was once again filled with aimless pottering. I have taken both Beate's and Vix's advice to heart and have been trying to start my non-office days with a plan. Unfortunately this all went out of the window again with Phoebe being so poorly.

So, that was it for now. I'll be lying low for a couple of days, trying to come to terms with our loss.

I'm missing our little monster more than words can say.

Posted by Polyester Princess at 15:00