Up the garden path

In the late hours of Friday before last, in their usual haphazard way, the Belgian government revealed their plans to relax the lockdown measures in three phases, starting 4 May. But while this should have resulted in a feeling of euphoria, I couldn't help but feel deflated, as I don't think we are quite there yet, and it's all a bit too much, too soon. I'm not going to go into any detail, but allowing all shops to re-open on 11 May does sound like madness to me, even if the necessary precautions are being taken. I might be wrong there, but I'm definitely not about to hit the shops any time soon!

In the meantime, we are still advised to stay at home as much as possible, so that's what we are doing! 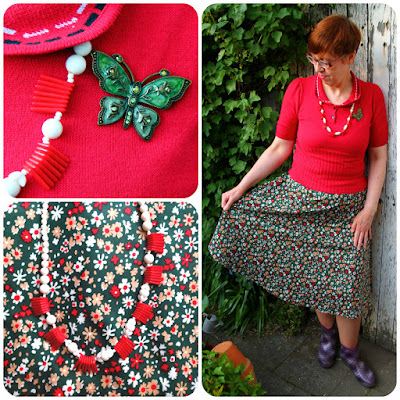 For me, Thursday before last was the start of another balmy April weekend and, as you might recall from my last post, I had plans a-plenty!

That's right, I was all ready for a spot of gardening!

Selecting a dark green vintage skirt printed with a meadow of tiny white, beige and red flowers, my thoughts immediately went to this short-sleeved, Peter Pan-collared jumper I charity shopped earlier this year. But even gardening outfits need their accessories, so I pinned a green enamelled butterfly brooch to the jumper and added a funky red and white plastic necklace. 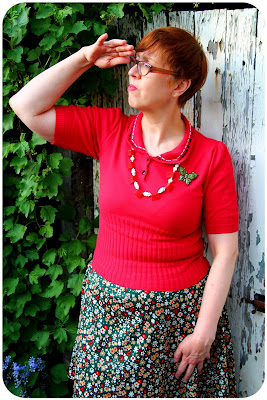 The sight of the box full of flowers I'd plonked on the garden table on Tuesday, with all their various colours, shapes and sizes, was making me all giddy, but there were a couple of other things I needed to do first. 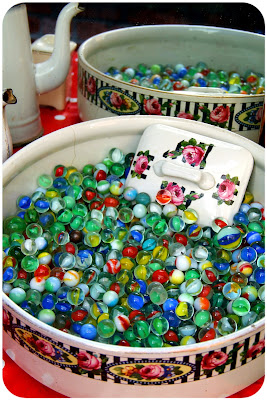 I'd been thinking of ways to spruce up the "garden bathroom", which we can see from our kitchen window,  when I suddenly remembered the old washing powder drum full of marbles we'd brought back from the parental home. I put a generous layer of them into the washing bowl, and hey presto, instant colour! 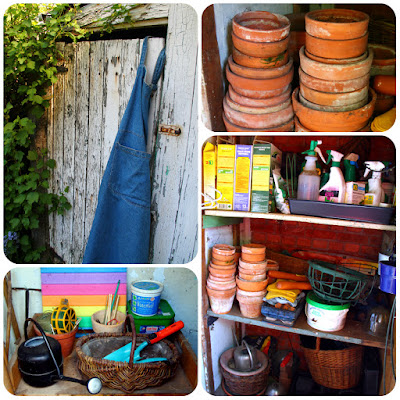 Ready to pot up some of those plants, I gingerly opened the potting shed door to be met by ... utter chaos.

What was once a neatly organized potting shed, with everything in its right place, had turned into a shed full of junk over the years. That needed to change before I could get started as I couldn't even access the stacks of terracotta pots on the shelves at the back.

So, while Jos was doing the weekly supermarket shop, I dragged out most of the shed's contents, and proceeded to recreate some kind of order.  I'm afraid I can't show you a photograph of all the mess, as I'd locked myself in with the mountain of stuff I'd created so that I couldn't go and get my camera. 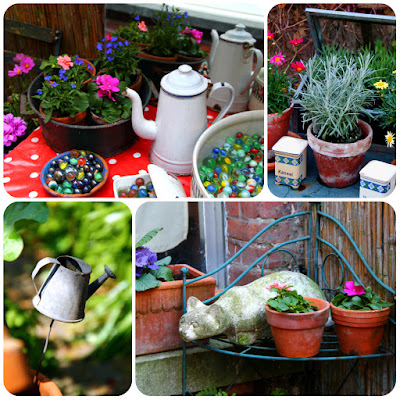 I was just putting back the last of the things when Jos returned. After helping him put away all the shopping, it was time for a lunch of homemade soup.

By then, my hands were really itching to finally get planting!  I started by putting some shade-loving Busy Lizzies and Lobelias in the "garden bathroom", which is in the passageway next to our kitchen and hardly gets any sunshine. Some leftover Busy Lizzies were potted up separately and put in the safekeeping of the mossy white stone cat who lives on top of the corner shelf next to our dining room windowsill.

On the top right is the curry plant (Helichrysum italicum) which joined the lavender and Argyranthemum on the little table in a sunny spot at the back of the garden.

The little watering can on the bottom left is a plant marker! 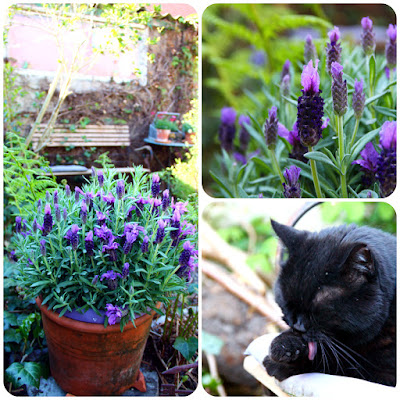 We didn't alter the structure of Dove Cottage's garden after we moved in and it still has quite a few elements of the original rock garden it was before our time. At the back of the sunken area in the middle of the garden is a small circular platform, which is firmly cemented in place. When we moved in there was an ugly ornamental windmill on top of it and, while this was swiftly removed, the platform has come in handy for displaying potted plants.

This year, we opted for a big pot of butterfly lavender. After a brief inspection, Phoebe proceeded with more urgent matters. 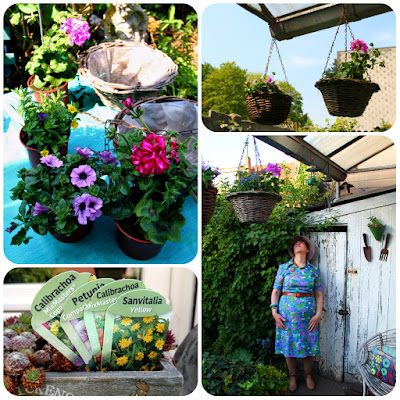 Friday's job was planting up two wicker hanging baskets I'd unearthed from the potting shed.

They are hanging from the edge of the glass awning outside our back door. Both have Pelargoniums in them, which were joined respectively by Lobelia, Petunia and Calibrachoa or Million Bells. 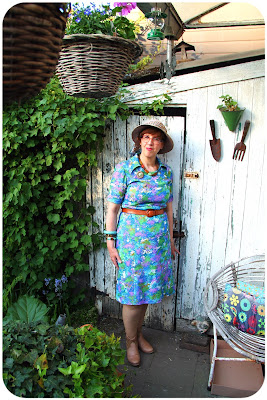 And here's me in my gardening gear of the day, a short-sleeved frock in a Springlike green, blue and lilac watercolour print. There's the potting shed and the giant white currant behind me!

The box under the chair isn't just junk: it's Phoebe's refuge for when she's caught out in the rain! 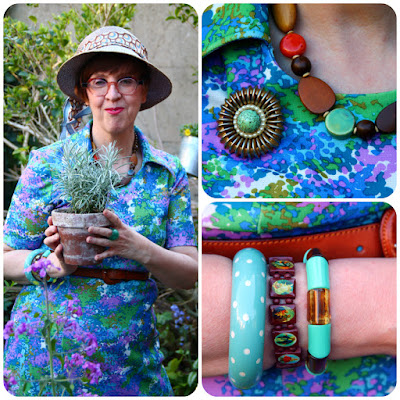 I added a tan belt, a brooch with a green mottled stone, a necklace combining wooden and ceramic beads, and a stackful of bracelets and bangles. The middle one is one of those cheap things with various saintly images.

The hat served a double purpose, acting both as sun protection and camouflage for my unruly hair.

Apart from the new additions, there is plenty going on in our garden, including one or two surprises. 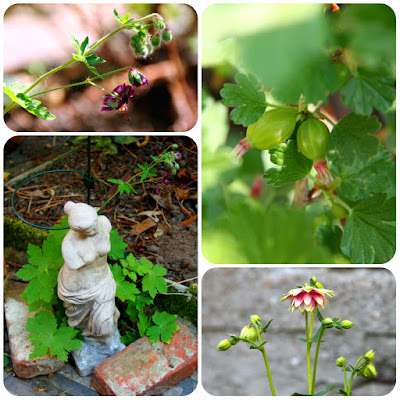 On the top left is one of the delicate dark purple blooms of Geranium phaeum, or dusky cranesbill. Originally planted in the border lining the paved garden path, it had now decided to move by self-seeding in a crack between the stones in front of our bench. Due to its rather precarious position, I added some protection in the form of two bricks and Venus, whom I found lurking beneath some plants.

Another prolific self-seeder is Aquilegia Nora Barlow (bottom right), with its frilly double flowers. It was cultivated by its namesake, Lady Barlow (1885-1989), a British botanist and Charles Darwin's granddaughter.

Oh, and we'll have a glut of gooseberries too this year, as our prickly bush is full of tiny striped berries! 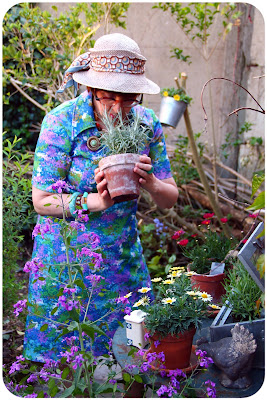 Time to stop and smell the roses! Or rather, the delicious aroma of curry plant!

Such a timeless quality to this photo, I think. It reminds me of those quintessential photos of Victorian and Edwardian lady gardeners.

A slow start to the day on Saturday, as it was after lunch before I made it into the garden. I had been procrastinating as I had a bit of a daunting task to do, preparing the area in front of our bench for planting and digging in a couple of buckets of homemade compost from our compost bin. 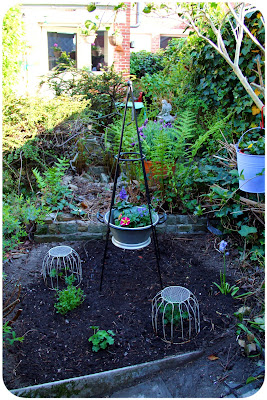 Our lilac tree used to live here, with a magnificent winter-flowering Clematis armandii growing through it, but both of them sadly died on us, the Lilac finally succumbing as a result of all the weight it had been carrying over the years.

After preparing the area, I planted the ground-covering perennials I'd bought, which included two types of hardy Geranium, Campanula and Lady's Mantle (Alchemilla mollis). I will be adding more plants later.

The wire obelisk, used for the initial training for the Clematis, was hiding beneath the remains of the Lilac, and all but forgotten. I put it at the back of the new border to provide some height, planting some climbing Nasturtium seeds around it.

After a good watering, I covered the most vulnerable of the plants with wire thingies to deter Phoebe's enthusiastic investigations. I've only got two of these, so they need to be shared and switched around once or twice until the plants are settled. 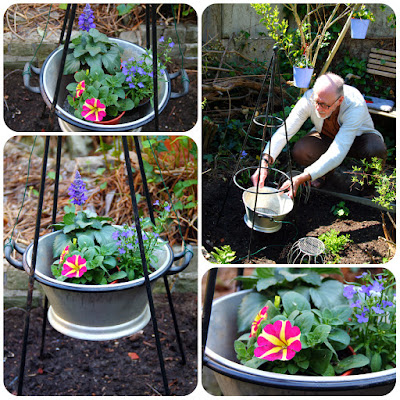 Sitting on the bench admiring my handiwork, I mentioned to Jos that it would be nice to put some annuals inside the obelisk to provide more interest. Trying out several options, we couldn't find a suitable receptacle until we hit upon the idea of using an old metal colander we had lying around in the basement. It was an old charity shop find we once used as a hanging basket! 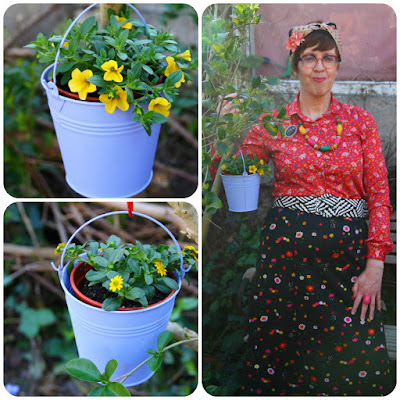 These two small lilac coloured tin buckets were also playing hide and seek in the basement and turned out be perfect to suspend pots of Million Bells and Sanvitalia from some bare branches.

Another bad hair day was made better by tying a scarf in it, securing it with two floral hair clips. 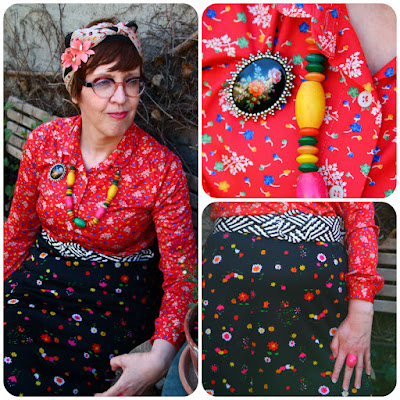 And that just leaves the rest of my outfit!

The day having had quite a chilly start, I opted for long sleeves, which weren't really necessary as the day progressed. I combined the red flower sprinkled blouse with a black floral skirt, adding a black and white woven belt to unite them.

More flowers appeared in my brooch, a heavy thing which doubles as a pendant. Finally, a multi-coloured wooden necklace and a pink plastic ring completed my outfit.

The day still had a surprise up its sleeve, but that will be for my next post! Oh, the suspense!

Until then, I'll end with the usual salute for these days, which is to keep safe and sane!