On most mornings, I wake up from weird and vivid dreams, which I only remember for a split second before they're gone. And although they cannot be classified as nightmares - what I do remember of them isn't exactly unpleasant - they leave me with an unsettled feeling of unease.

Apparently, I'm not alone, and there's a scientific explanation for them as they are due to
pandemic-related anxiety, our minds having so much more to process in terms of experiences and feelings.

Waking up to reality can be a mixed bag too. Some days I am raring to go, already making plans while hopping out of bed. OK, hopping might be a bit far-fetched, but I'm sure you'll get the picture.

But then there are those days when I'm feeling lethargic and would rather crawl back under the duvet than face another day in this strange new reality. 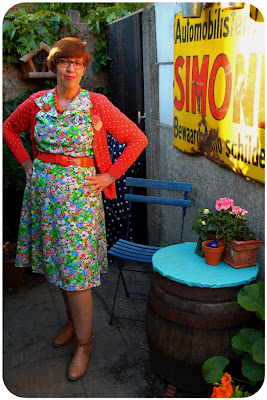 Sunday before last was a day which fell exactly between those two extremes, neither here not there, just like the weather. The sunlight which was bathing our garden in its glow was in sharp contrast to the chilly wind, which put paid to our plans for a relaxing day sitting in our secluded little corner at the back of the garden. 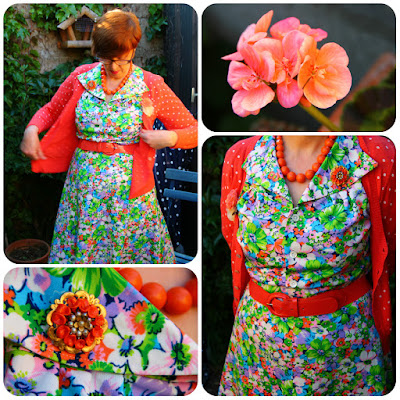 I was wearing a favourite dress in an attempt to improve my mood, a 1940s style full-on floral vintage one with slightly puffy sleeves, its upturned cuffs finished with a button. It is of the fit and flare variety, making it the ideal silhouette for me, and is boosting a buttoned bodice and wide lapels.

From its many colours, I chose orange for all my accessories: a half-elasticated belt, beaded necklace and vintage brooch. On top went a charity shopped orange polka-dot cardigan to combat the chill. 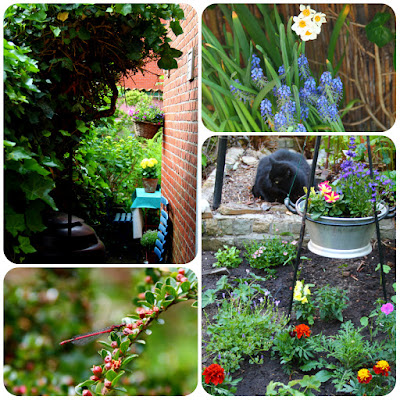 I pottered around the garden, taking in the full effect of Jos's rigorous pruning of the ivy and climbing hydrangea in the passageway. Not only does this offer an almost uninterrupted view to the back of the garden, we can now reach the compost bin without bending double or bumping our heads against the low hanging branches of the hydrangea.

The last of the grape hyacinths and daffodils have been left to die down in a corner, out of sight but definitely not out of mind: they will be replanted in the garden in Autumn.

Phoebe was surveying my efforts in the newly developed border, while other wildlife - in this case, a delightful red damselfly - was enjoying a moment of quiet. 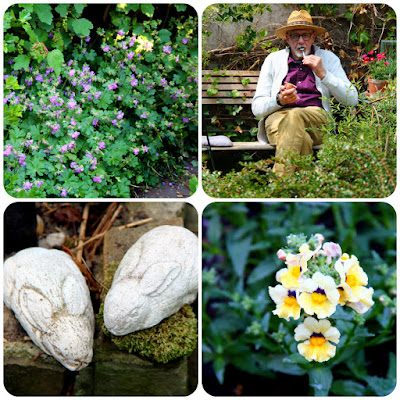 A mass of lilac flowers is provided by our trusty hardy geranium, one of our garden's greatest successes, having survived, or perhaps thriving on, the neglect of the last couple of years.

Jos needs regular chocolate boosts to keep going, and was enjoying another tub of chocolate mousse.

And look at those lovely Nemesias which, rather than putting in a pot, I planted out in my new border to provide even more floral interest. 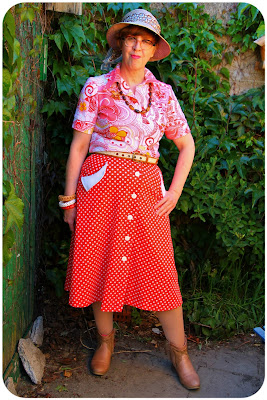 I'm skimming Monday, which was another hectic office day, made even more stressful by having to dodge hordes of regulation bending shoppers on my way home.

Having made it to the car, we were just heading out of town, when I realized I'd forgotten my reading glasses at the office! Not wanting to spend my non-office Tuesday without them, we had to return through the hectic rush hour traffic to our pick-up spot, and I had to face the crowds all over again. Such a relief I only have to commute twice a week! 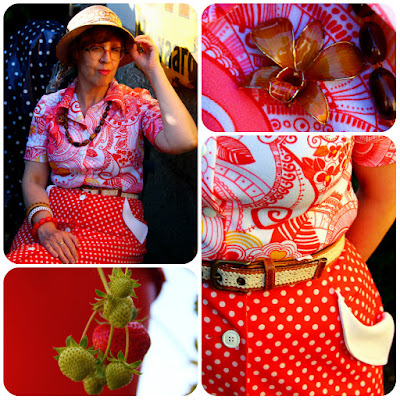 The weather and my mood were definitely on the up again by Tuesday. I was craving some red, so I selected on of my reddest skirts, a vintage button-up polka-dot one featuring side pockets with white tabs. I combined it with a funky red, orange and pink printed vintage blouse. An orchid brooch, a brown mottled beaded necklace, an armful of bangles and a lace trimmed tan belt completed that day's outfit. 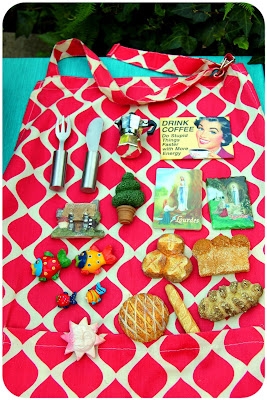 While Jos went to the drinks superstore, I washed up our breakfast things and then treated all our fridge magnets to a soak. A motley collection gathered over the years, quite a few of these were freebies, such as the different loaves of bread, which came from a local bakery, and the Lourdes souvenirs, which were gifts.

They all live on the side panel of our free-standing fridge, with only one taking pride of place on its door. And no, we've never been to Nebraska, nor to its State Fair! I won it in Goody's State Fair giveaway two Summers ago. 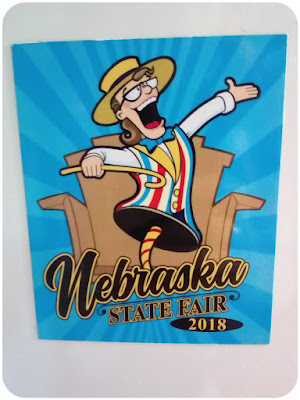 Jos returned with our week's supply of drinks and, after putting everything away, we sat in the garden until it was time for lunch.

Well, that was the plan. However, fed up with seeing the twining tendrils of our Akebia quinata, or chocolate vine, snaking its way through the garden, Jos took the secateurs to them. A climber we were foolish enough to plant many years ago and cannot seem to get rid of, its only redeeming features are its dark purple chocolate scented flowers.

Later, when I went to inspect his handiwork, I was amazed to see that the Clematis we'd thought we'd lost (bottom left) was still alive and kicking! I'm currently cossetting it with some well-deserved TLC. Its full name is Clematis viticella "Etoile Violette" and it's got the most amazing velvety violet flowers, which I live in hope it will produce this Summer. 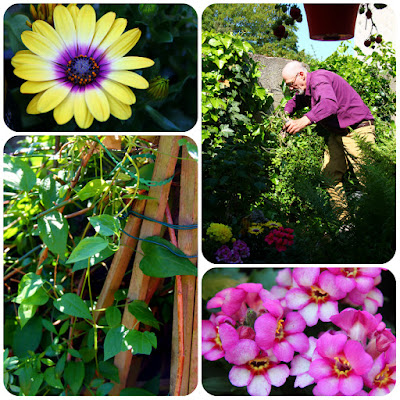 After lunch, we made another visit to the garden centre, although this wasn't our usual day. We needed to pick up some yeast from the home baking department, and wanted to buy another one of those solar spotlights, but alas, the latter were sold out.

While we were there, it would have been downright silly not to have a look at the plants, so I did and bought oriental and Iceland poppies, Stachys byzantina or Lamb's Ear and a pot of Penstemons. 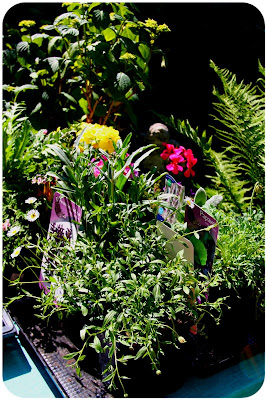 And we bought these: solar-powered jars with strings of Led lights in them. Aren't they magical? 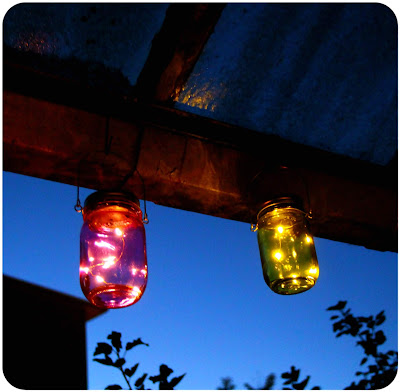 After the rude interruption of yet another office day on Wednesday (how bothersome!), we made it to Thursday and the start of another 4-day weekend.

The forecast had been for hot Summer weather, with temperatures in the high twenties, so nothing more strenuous than sitting out in the garden was on the menu. 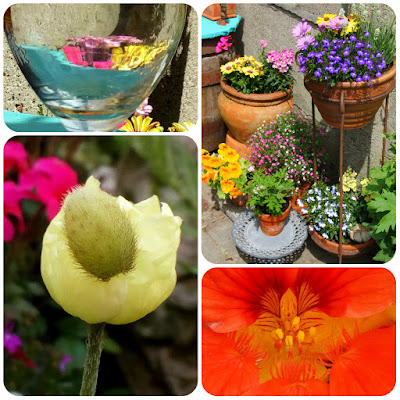 A glance out of the window at breakfast time was rewarded with one of the Iceland poppies having just popped open, with one part of its hairy pod still hanging on for dear life. I quickly got my phone to make some photos with its camera, using a cheap macro lens attachment. I had some fun playing around with it, photographing the inside of a Nasturtium flower, which looks rather spectacular! 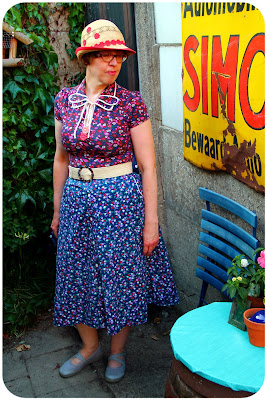 We enjoyed sitting in our little courtyard among the fruits of our labour until mid-afternoon, when our peace and quiet were shattered by our neighbour, who'd invited some friends over for a barbecue. Things got a bit boisterous so we fled inside. In our narrow terraced gardens there's really no escape from things like that as, in spite of the high walls, people are literally sitting mere metres away from you and you can hear - but thankfully not see - everything that's going on.

But I was able to have a zen moment, with my head among the honeysuckle, which had just opened the first of its deliciously fragrant flowers. 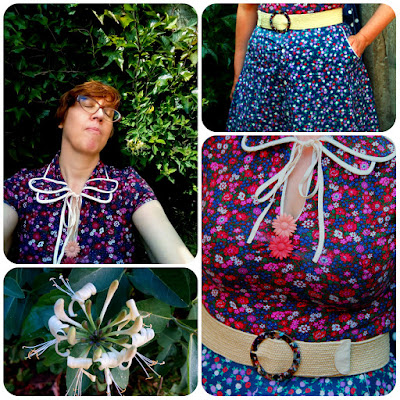 When I posted the zen photo on Instagram, several followers waxed lyrical about the collar on my blouse, which everybody presumed was a dress.

It is by Belgian label Lucy Has A Secret, and was charity shopped for a fraction of its undoubtedly astronomical retail price back in September.

For its first wear, I combined it with a 1970s cotton, button-up kirt sprinkled with tiny flowers. I quite liked the effect of the two seriously floral items together, kept in check by a cream elasticated belt, with a round circular buckle. In order to keep it decent, I pinned two flower brooches to the blouse's decolletage! 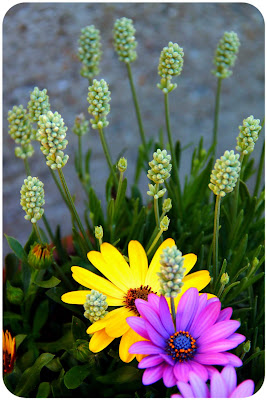 That'll be it for now. I will be returning with further tales of semi-lockdown soon.