Greetings from a lockdown garden

Those of you who are the lucky owners of a garden will almost certainly agree that it's been a blessing in these most unsettling of times. Surely, even at the best of times, nothing compares to spending time in one's garden on a warm Spring day?

After the brief but welcome rain and cooler temperatures of the preceding week, they'd climbed well into the twenties by the weekend before last. 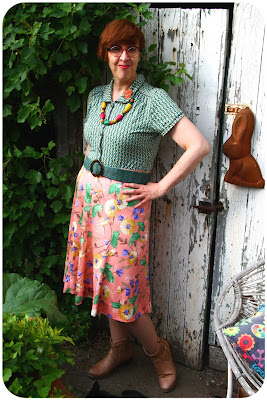 That Friday, we were all ready for another outing to the garden centre, followed by a spot of gardening.

I dressed in a skirt you've seen before quite recently, a pink one scattered with a blue, green, yellow and white floral print. I wore a plain green sailor-style jumper with it last time, but now I opted for a charity shopped King Louie blouse with a retro-style print in green and turquoise.

To its collar, I pinned a squirrel brooch I picked up in a charity shop during our last sojourn in Belgium's west country. Both the multi-coloured wooden beads and the bracelets were local charity shop finds, while the teal belt with its mock tortoiseshell buckle was a retail sales bargain earlier this year. 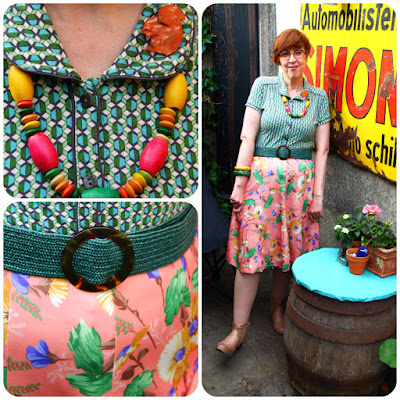 Back from the garden centre with two more boxes of colourful plants, our first task was to clear the little courtyard at the back of our garden.

I did not take before photos, but believe me, it was one hell of a task, as the paving stones to the right of where we'd put the barrel were completely hidden by a thick layer of soil and garden waste. It was so bad that some uninvited plants had firmly taken root in the cracks between the stones. 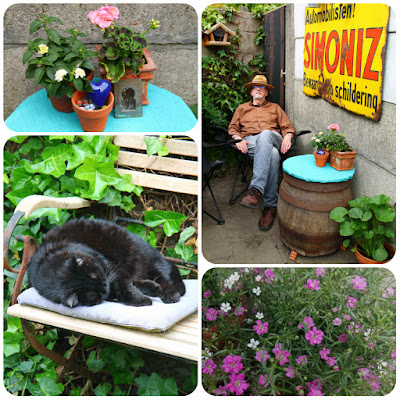 Finally, after quite a bit of sweating and swearing in the sweltering heat trapped between the garden walls and the shed, the old paving stones emerged. By that time, we had just enough energy left for some perfunctory sweeping of the dust, and decided to leave the rest to the rain which was inevitably forecasted for Sunday.

Now, it was time for the fun part: converting the courtyard into a cozy place to sit and enjoy the garden.

The pots I'd put on the barrel received the company of several of the plants we'd brought back from the garden centre. I've always loved hollyhocks (Alcea rosea), so I was delighted to have come across a pot of  'Charter's Double' in pink, which I transferred to a big terracotta pot, giving it a home next to the barrel. 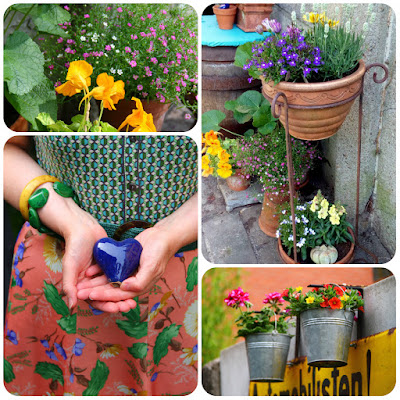 The old metal, double layered plant stand which had been wasting away plant-less for years, is now taking pride of place, bearing two pots with a mixture of annuals, with a pretty white lavender in the top one. Separate pots of Nasturtiums and pink and white Gypsophila were added for that cottage garden feel.

Oh, and you've probably noticed the tin buckets with Pelargoniums and Million Bells hanging from the brackets bearing the enamal sign! 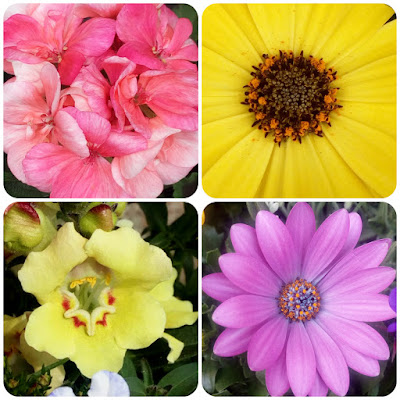 Some of the annuals I've planted in the pots include a raspberry swirl Pelargonium, yellow and lilac Osteospermum, and Antirrhinum 'Yellow Maroon', a range of new, exquisite and lightly fragrant snapdragons. 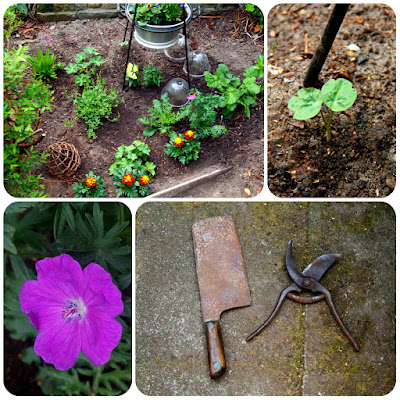 The newly planted border is coming along nicely, with one of the hardy Geraniums opening the first of its flowers. I added some traditional snapdragons, and a row of Tagetes, or French marigolds, in a bold maroon and bright orange variety called 'Tiger Eyes'.

Some more perennials were added as well. I planted Scabiosa 'Pink Mist', a double Geum called 'Lady Stratheden' and Helenium 'The Bishop'. And I definitely needn't have worried about the climbing Nasturtium seeds I planted at the base of the wire obelisk, as they are emerging one by one. How exciting!

Exciting finds from the potting shed as well, including an ancient cleaver belonging to Jos's Dad and a pair of secateurs belonging to his ex-father-in-law, who was a professional gardener. 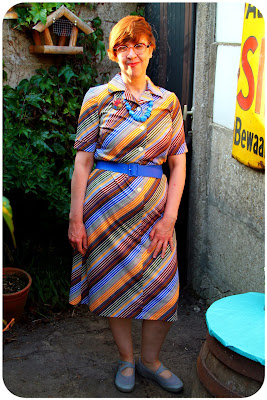 Sunday was even warmer, with the mercury nudging towards the high twenties.

Jos had dragged our comfortable folding garden chairs out of the shed and given them a thorough clean, and we sat enjoying the spoils of our labour in our newly created secret sitting area, well hidden away from prying neighbourly eyes. 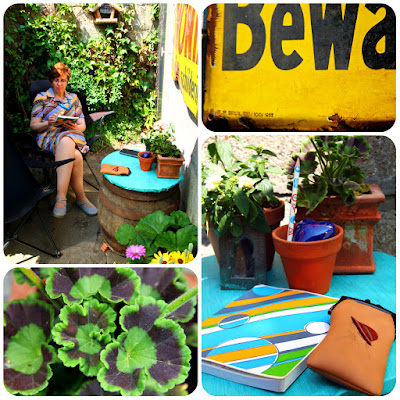 The perfect spot for some reading - finishing my latest book, which I admit was a bit of a slog - and making some blog post notations in my funky charity shopped notebook.

While we were sitting there, Jos noticed that the enamel sign was marked with the year 1932, making it an incredible 88 years old! 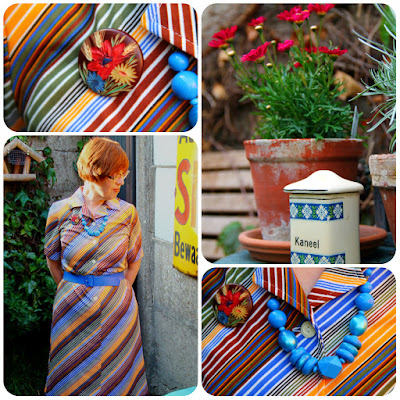 From the dress's colours, I picked cornflower blue for my accessories, adding a belt and beaded necklace, as well as a 1940s carved celluloid brooch featuring the typical poppy, daisy and cornflower associated with the World War II Liberation. 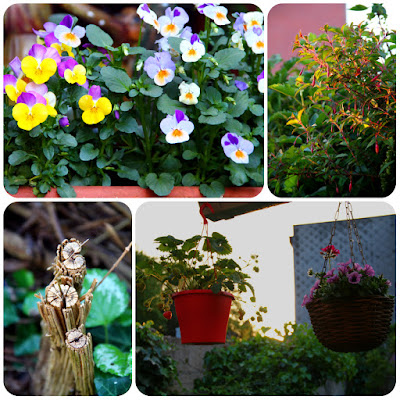 What a glorious day it was, with the balmy temperatures lasting well into the evening, the slanting rays of the setting sun casting a golden glow over our tiny piece of paradise.

And look at the gorgeous little bells of our Fuchsia magellanica peeking through the foliage of the mighty white currant bush. They are very early this year, as they usually only appear from late June onwards. 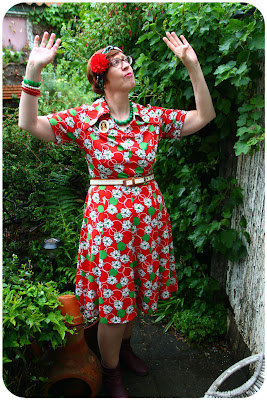 It was a completely different story on Sunday, the temperatures having dropped several degrees. And while during the first part of the day, the sun still did its best to warm things up, a sharpish wind made it quite unpleasant and admittedly a bit too chilly for short sleeves.

By mid afternoon, torrential rains put paid to any further gardening plans. We'd left it too late to make outfit photos, so that we had to wait out the rain to show you my tomato red dress liberally sprinkled with green and white flowers. 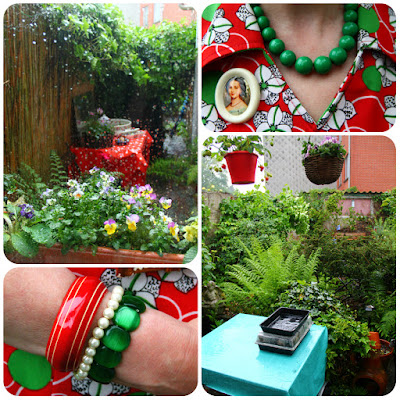 I stuck to green and white, with a bit of red, for my accessories, including a beaded necklace, a stack of bracelets in all three colours, a creamy oval brooch bearing the portrait of a lady, and a red flower clipped to another #coronahair solution. 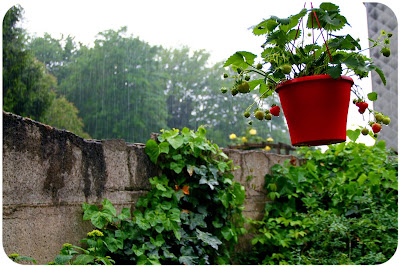 The rain made the garden smell heavenly, and I think I could actually hear it breathing a sigh of relief on receiving those welcome, life-giving rains the heavens were chucking down.

No chance for sitting out in the garden, but at least I only had to water the plants under the awning that day!

Posted by Polyester Princess at 19:36