A slower pace of life

After one and a half months of reduced working hours, it seems that we've finally established some kind of rhythm to these out-of-sync weeks, while relishing this slower pace of life.

They now come in two distinct parts, these weeks, with our old routine still present in the first part of the week, where a quiet, at-home Tuesday is sandwiched between my two office days.

The rhythm changes in the second part of the week, as it's during the slow-paced extended weekend from Thursday to Sunday that we tend to lose track of time, often forgetting which day of the week it is.

Still, there is some kind of rhythm to this too. Thursday is food shopping day - done by Jos - and lately we have been treating ourselves to a visit to the garden centre on Fridays, which is as safe and relaxing an outing as is possible in these pandemic times. 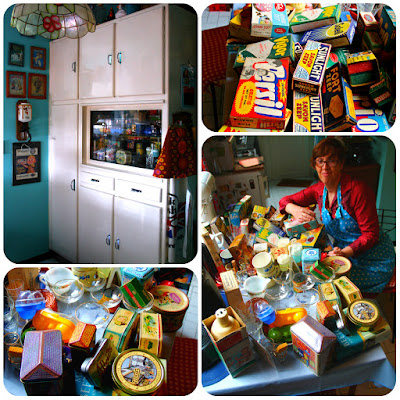 I'm at my best on Thursdays and Fridays, when I'm chomping at the bit to tackle a couple of chores around the house, but my enthusiasm usually peters out by Saturday. And then there are the Sundays, which are often off-days, with a certain sadness creeping in and the chances of a wobble increasing as the day goes by.

Weather permitting, any time we can is spent in the garden. Tiny it may be, but undoing the neglect of the last a couple of years will keep us busy for quite a while to come.

Any gardening projects were definitely off-the cards on Sunday before last, as the weather gods kept sending fickle Spring weather our way.  In order to keep the blues at bay, I decided to crack on with something I'd had in mind for weeks, which was to empty, clean and rearrange the display cabinet in our big kitchen cupboard. 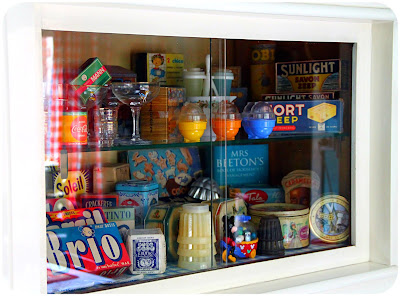 Its contents, which includes heirlooms, souvenirs and vintage finds, had grown organically over the better part of 20 years, resulting in a haphazard display of miscellaneous odds and ends.

And even though I had already removed and re-homed some bits and pieces over the past days, I was still quite shocked to see the cabinet's contents filling the whole of our kitchen table. And some. 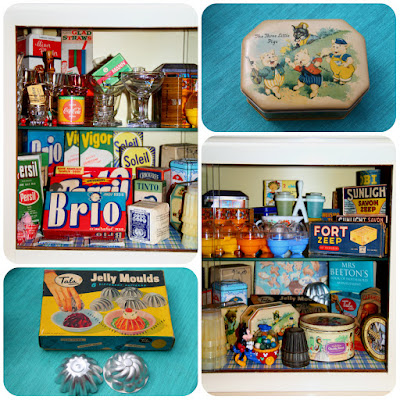 Having already given it some advance thought - Jos would often find me standing in front of the cabinet, seemingly gazing into space - rearranging all that stuff turned out to be a doddle.

In no time, I'd created separate displays of vintage glasses and other drink related items, washing powders and starches from a bygone age, baking and sweets paraphernalia, toilet soaps and some random items of kitchenalia.

The tin decorated with The Three Little Pigs used to contain Côte d'Or chocolates and used to belong to my paternal grandparents. It still holds the same set of dominoes I played with as a child.

The Tala jelly moulds came from an antique centre in Newcastle Emlyn, Wales. 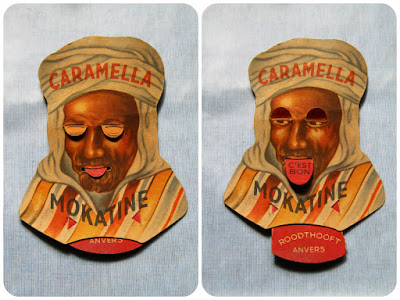 This quirky carton advertising gimmick is for "Caramella Mokatine", also known as "Arabierke" (Flemish for little Arab) due to its distinctive wrapping, a coffee-flavoured sweet which was introduced in 1934 and is still being produced today.

Pulling the tab with the factory name at the bottom makes the Arab open his eyes and stick out his tongue, which has the French words "C'est Bon" printed on it. Belgium being a bilingual country, it also came in a Flemish version. 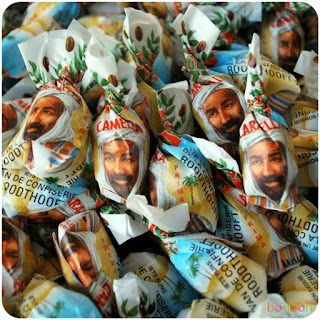 Spring made a happy return on Monday's office day, continuing into Tuesday, and I was glad to be back in short sleeves.

My choice that day was a vintage dress in a funky turquoise, green, grey and white pattern. It has self fabric buttons and a notched lapel, to which I'd pinned a turquoise starburst brooch.  My other accessories were a white vinyl belt and a string of pale green beads. 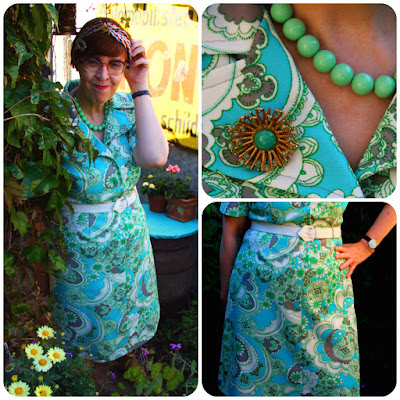 While I was a the office on Monday, Jos had been busy too.

About to put up our enamel sign during the weekend, he was looking for some screws in the shed, when I noticed this old wooden barrel tucked away in a corner. It had been a gift from one of my Dad's friends many years ago, which had ended up in the shed as we didn't quite know what to do with it at the time. Having a light-bulb moment, I thought we could use it as a plant table, so on Monday Jos dragged it outside and, as it was lidless, topped it with a circular piece of plywood he'd found among the junk. 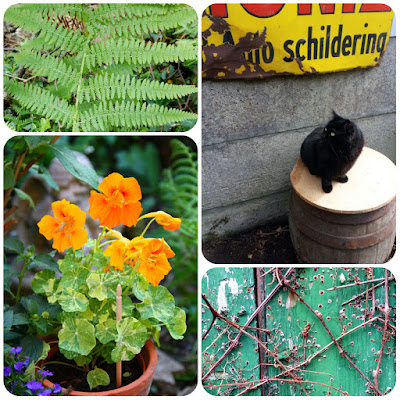 Going back inside the house to get his phone so that he could send me a photo of his efforts, he returned finding Phoebe doing a full investigation! She definitely approves, as we often find her keeping watch over the garden from her new perch. 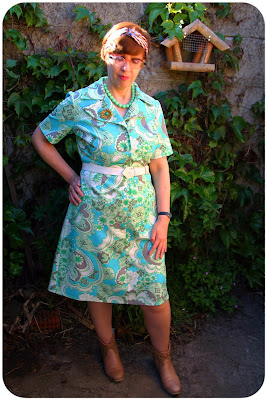 Back to Tuesday morning, when Jos's son Kris arrived bearing some face masks expertly made by Jos's youngest daughter An. She'd been kind enough to send me a photo of her creations earlier, offering me first choice. How sweet is that? Surely you'll agree that the red floral one and the blue one printed with its mix of flowers and butterflies are both totally me!

As we never ever wash at high temperatures, we used the alternative method of boiling them in a pan of water - which we are using exclusively for this purpose in case you are worried - with some detergent. 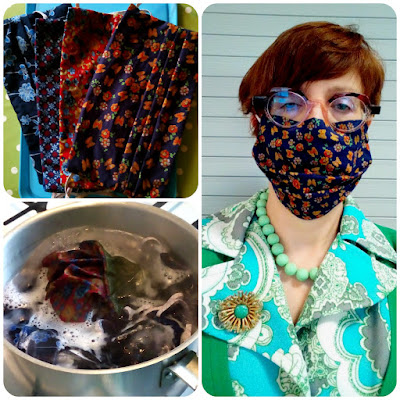 Taking advantage of the sunny weather, we added some more improvements to what we rather grandly call the courtyard, a small paved area next to the shed at the bottom of the garden.

This is where we hung the sign, putting the barrel underneath. In order to make the tabletop waterproof, we tacked a piece of oilcloth to it.  Further cheer was provided by adding some terracotta pots of Pelargonium and Lantana.

Not quite ready yet, but it's a start! 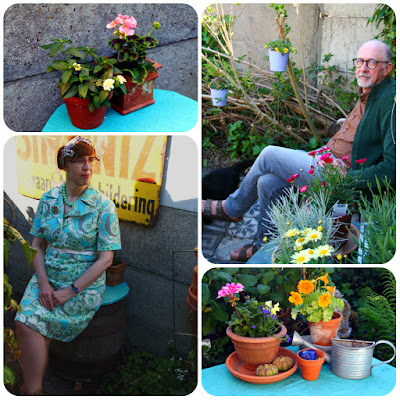 Skipping Wednesday, which was another office day, Thursday arrived with more sunshine and steadily climbing temperatures.

It was still quite chilly that morning so, while Jos was braving the supermarket, I decided to leave the  garden jobs I'd lined up for the afternoon. 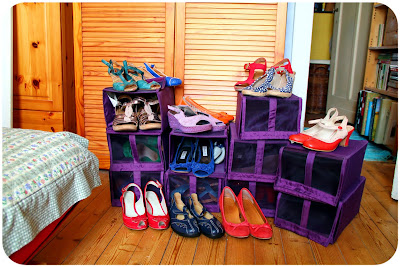 I thought I'd put away my tall boots and get out a selection of Summer shoes, but ended up doing a complete shoe changeover, only leaving out some of my favourite ankle boots to tide me over.

My shoes of the season live in this high rise tower of IKEA shoe boxes in the spare room, wedged between the mantelpiece and the coats wardrobe. The boxes are all on individual shelf ledgers, and each contains two to three pairs of shoes or sandals. 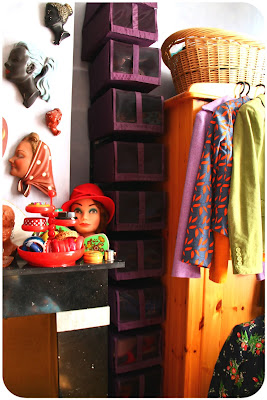 It had warmed up considerably after lunch, so I was out in the garden in a jiffy, as I wanted to sow some Nasturtium seeds in pots, in case the ones I sowed directly in the garden didn't come up.

I used some biodegradable pots I can plant out straight into the garden when the plants are big enough. As I only had three such pots left, I fashioned some from empty toilet rolls. The pots were then put into a lidded propagator tray I'd found hidden away in the basement. I've really been shopping our house, not just my wardrobe! 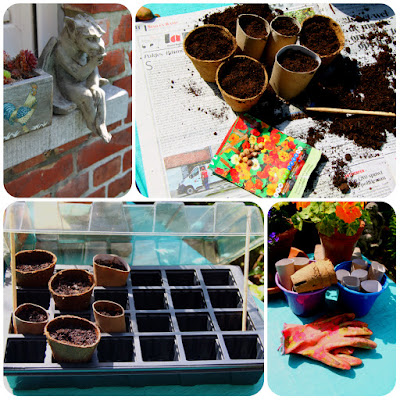 With that job out of the way, I potted up some of the plants we'd got at the garden centre the previous week: white and pink Cosmos, yellow and red Snapdragons and ... more Nasturtiums. I couldn't resist buying these full-grown plants, which have the added bonus of variegated leaves. 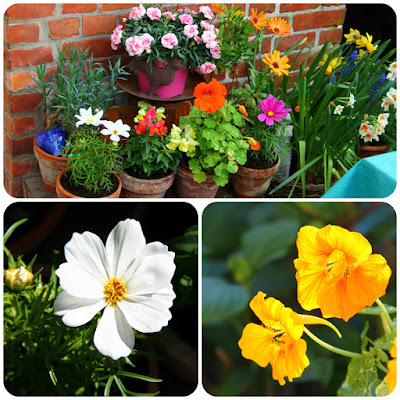 And here's my gardening attire that day. Note that I only wore the forget-me-not blue suede ankle boots for the photos. I did my actual gardening wearing my ankle wellies! 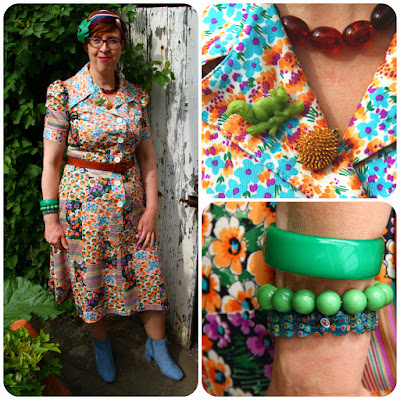 The dress was a Think Twice find at the tail end of last Summer, and got its first outing on this lovely Spring day.

I pinned not one, but two brooches to it, as I thought the green squirrel and the green-eyed hedgehog might appreciate each other's company.

A brown belt, brown translucent beads and green and turquoise bangles and bracelets were my outfit's finishing touches. 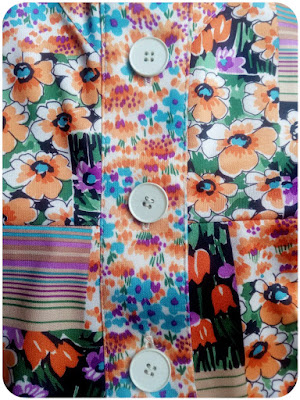 I've included a close-up of the dress's print, which combines several floral patterns and even some stripes! 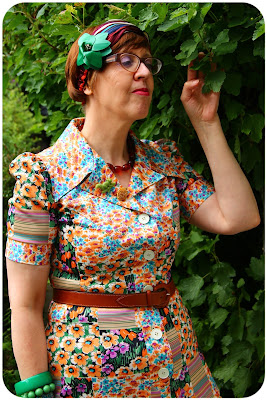 Thursday's #coronahair solution was a semi-elastic hairband to which I clipped another of my flower corsage.

Expect to see more of these hairbands, as I picked up several in a haberdashery and accessories shop during lunch time on Wednesday. As from Monday last week, these shops had been allowed to re-open as they are considered essential for mask making. Going for a quick walk around the block and passing the shop, I noticed it was relatively empty, so I went in and got these.

How strange it felt to be in an actual shop! It felt like it had been years ago, instead of just under two months. How much our lives have changed, as so many things we used to take for granted are now well out of reach.

For now, I prefer to stay home and keep safe inside our little bubble as much as I possibly can. I hope you are doing the same?

Posted by Polyester Princess at 19:47