Admittedly, the torrential rain we were treated to on Sunday before last did have its advantages. Not only did it go a long way in quenching our garden's thirst, it also saved us the job of cleaning the decorative tiles lining the path in front of our garden bench.

This higgledy-piggeldy collection of what we suspect might have been Dove Cottage's original kitchen tiles, was part and parcel of our garden's lay-out when we bought the house, and add a quirky element to the otherwise boring grey paving slabs elsewhere in the garden. 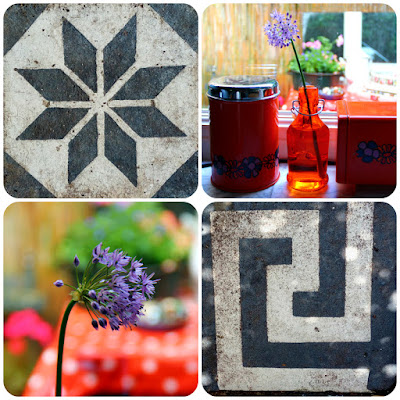 But the rain had made some casualties as well, as it had flattened the one and only Allium out of the half a dozen bulbs I'd planted many years ago, which had been foolhardy enough to produce a purple globe.

In order to still enjoy its transient beauty, I snipped off its stem just above breaking point and put it in an orange glass bottle we found lurking at the back of our kitchen cupboard.  It lasted almost a week on our kitchen windowsill, between two items of 1970s orange kitchenalia. 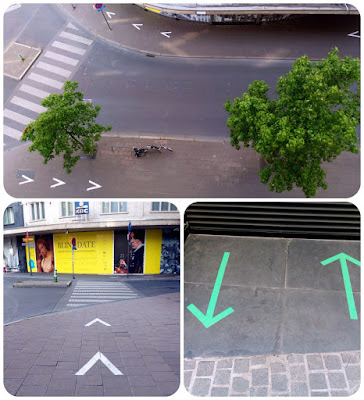 It was such a relief to be home from work that Monday, as it had been a bit of a stressful day. That Monday, the 11th of May, was the day all Belgian shops were allowed to re-open, with a mass of people reminiscent of the first day of the sales flocking to Antwerp's shopping streets.

I had been anxiously watching procedures from my 5th floor office windows, noticing that a lot of people seemingly couldn't care less about the rules. People were supposed to walk on the right with helpful arrows painstakingly painted on the footpaths, but even as early as late morning it was total chaos, with people walking willy-nilly and often hardly observing social distancing.

I was a nervous wreck and had a knot in my stomach by the time I had to go home. Needless to say I wore my mask as an extra precaution while trying to avoid people running straight into me. I told off quite a few of them, pointing at the arrows and telling them they had to walk on the opposite side of the street, but most of them just looked at me as if I was a madwoman. They might have thought they were smart, but really, they were so stupid, stupid, and I was all ready to shoot some poison arrows into their general direction. 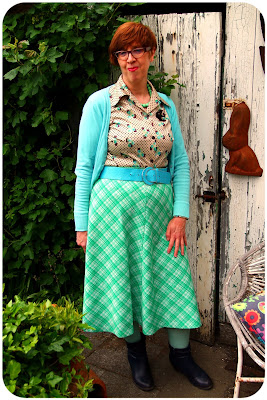 So glad Tuesday rolled along, and I could stay safely at home.

The sun, which had been shining on Monday's shoppers, did let us down a bit that day, and it was chilly enough to wear a cardigan. I was re-wearing the green plaid patterned midi skirt I wore on the blog not all that long ago, this time adding a long-sleeved blouse printed with green and turquoise flowers and tiny brown dots. 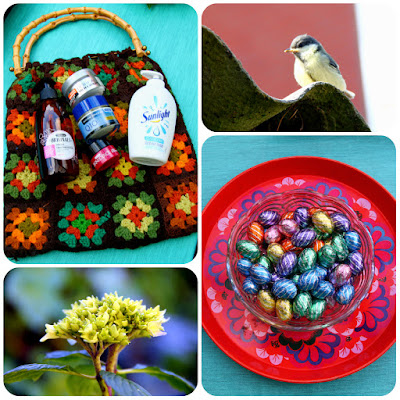 Both Jos and I were almost at the bottom of some of our self-care essentials and we were running low on hand soaps, so I ventured into our village's mercifully quiet high street by opening time, and was able to get most of the things on my list in one particular shop. As the shop had had to close in the run-up to Easter, they were stuck with lots of unsold stock, so that I was given a whole kilo of mini Easter eggs for free.

Most of which have been scoffed by Jos, I should add.  I honestly, hand on heart, have only had a handful.

While sitting out in the garden after this expedition, we were visited by a fledgling blue tit, who excitedly chirped at us. Further excitement in the garden was provided by the steadily growing Hydrangea flower heads. 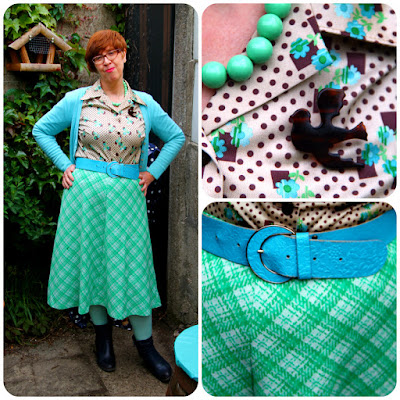 And here's a better look at the print of my blouse, to which I'd pinned a faux tortoiseshell bird brooch. I wore a turquoise flower-embossed belt and a string of pale green plastic beads. Due to the chill I'd reverted to wearing opaques, unearthing this pair in a soft eau de nil shade from the bottom of a box.

Who needs shopping - except for food, flowers and face creams - when one lives in a maximalist home? A stylish cover for our garden chairs was provided by a redundant vinyl tablecloth we'd kept for decorating our flea market stall. 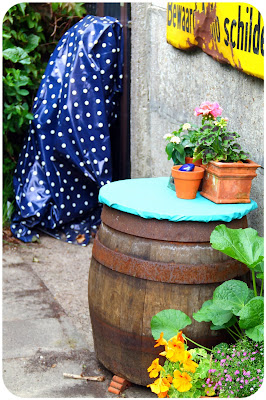 The neither here nor there weather continued throughout the day, so that I decided to carry on with the seemingly never-ending kitchen cleaning. When I'd just learned I would only be working two days a week, I envisaged myself whirling like a white tornado through the house, ending up with a fully cleaned and reorganized ground floor by the end of the month.

Instead, I've just only worked myself halfway through the kitchen, taking my time with everything and only tackling the jobs I feel like doing. 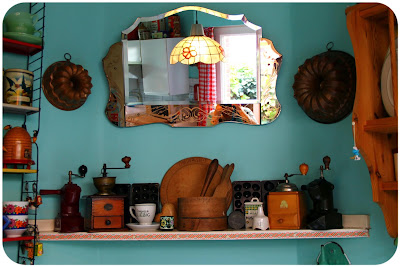 Having finished the shallow Tomado shelves, it was now the turn of the mantelpiece shelf next to it.

After I'd taken everything off for cleaning, I thought the shelf did look a bit lacklustre, especially its edge, where the creamy white paint had chipped in several places. I was thinking of adding some kind of lacy trim but when I looked in my haberdashery stash, I came across some white ribbon trim embroidered with orange and green. Perfect!

Nearly all my sewing things are second-hand, by the way. They were either the contents of charity shopped sewing boxes or were inherited from my Mum and my paternal grandmother. 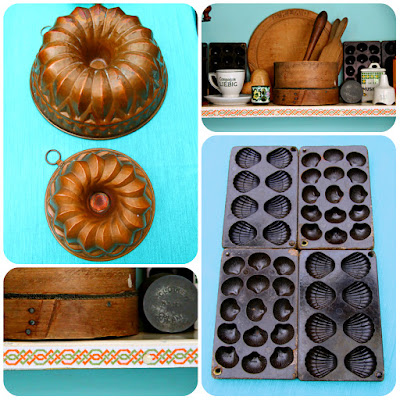 The copper moulds which grace the wall on either side of the mirror were bought in the UK and at a local flea market respectively. I gave them a bit of a well-needed buff but I've got no intention of making them all shiny and stately home perfect. In fact, I rather prefer them with all their stains and imperfections, speaking of a well-lived previous life.

The mirror was originally intended for our bathroom. We'd spotted it in a charity shop, but baulked at its highly inflated price. Months later, after we'd found a different and much more affordable mirror for our bathroom, we noticed that this one had been reduced to too ridiculously low a price it would have been a shame not to buy it. 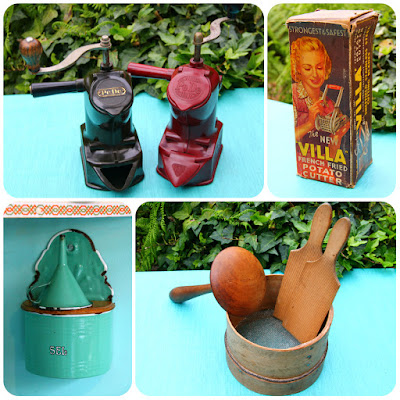 The green salt cellar and funnel were picked up at flea markets several years apart.

Finally, on the top right, is one of our oldest pieces of kitchenalia in terms of ownership. The French Fries cutter (big mistake, as fries are a Belgian invention and not French!) was bought in a junk shop in Wells, Somerset, in the early noughties. The box has been living on top of our wall mounted plate rack next to the mantelpiece shelf for years. 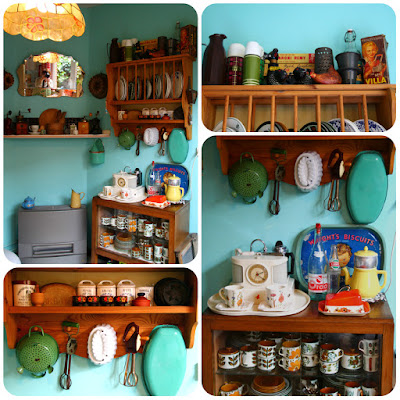 Being on a roll, I continued with said plate rack, again taking everything off and cleaning the surfaces as well as the myriad of objects on display. Apart from plates, there's a multitude of other kitchen bits and bobs on top of the rack, as well as items of kitchenalia, including a colander, whisks, a pudding mould and an enamel bread basket hanging from its hooks.

The glass fronted cabinet below the rack holds our collection of 1960s Boch crockery. 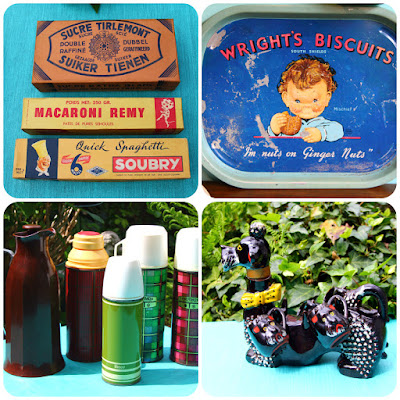 Vintage packets of sugar cubes and pasta are sharing space with a small collection of Thermos flasks - one of them Bakelite - and a kitschy ceramic poodle decanter bearing several poodle-faced cups.

The Wright's Biscuits Ginger Nuts tray, featuring the cheeky-faced little boy called Mischief, was picked up at a flea market held in the next village.

Mischief was Wright's Biscuits' trademark, drawn by Mabel Lucie Attwell, and children could join the Mischief Club and get a special badge. 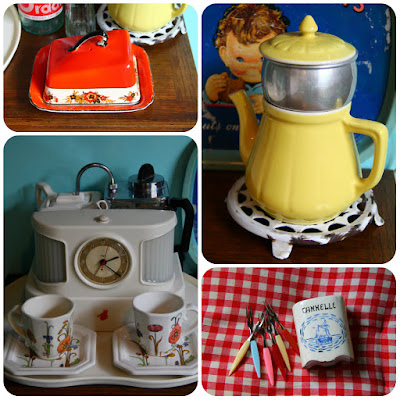 Other treasures include the orange Wedgwood butter dish, which was winking at us in the window of an antiques centre in Newcastle Emlyn, Wales, as well as the French coffee pot, complete with filter, and our beloved Teasmade, both of which were flea market finds.

The small canister on the bottom left, which has long ago lost its lid, is part of the set of canisters living elsewhere in our kitchen (see here) and is holding the tiny cocktail forks which used to belong to my parents. 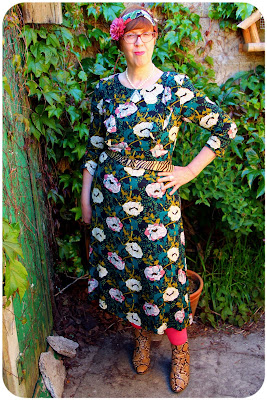 Wednesday was another office day and even if there was less of a crowd out shopping in Antwerp, the arrows were still mostly disregarded. I tried not to let it get to me too much and hastened to our agreed pick-up point hiding my scolding face beneath my mask and my quiver of arrows tucked away inside by bag.

Uncharacteristically, Thursday was a bit of a slow burner, when I couldn't settle to anything, with the weather not inviting enough to spend much time in the garden.

After an unproductive morning, I though I'd better finish in the kitchen but in order not to bore you I've decided to leave this for my next post, treating you to that day's outfit instead. 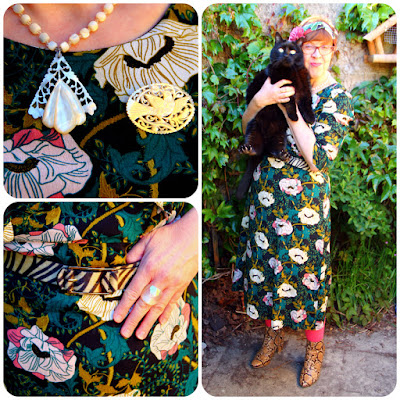 The floaty floral C&A midi dress was a sales bargain three Winters ago. Picking up the pink bit in its print, I wore bright pink opaques. The off-white bits were enhanced by my mother of pearl pendant and brooch, both of which are favourite flea market finds.

Some animal elements were introduced as well: a zebra print belt and snake print ankle boots - both sales bargains - and a fiery eyed Phoebe, who was given to us for free but has cost us handfuls of money over the years! 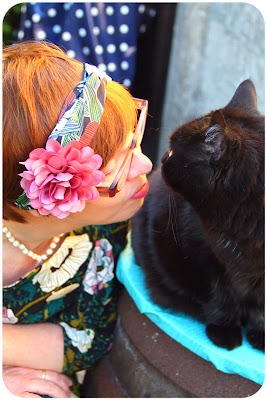 But does she appreciate this? Not a chance!

And before you ooh and aah over the kiss we share, don't be fooled, as it's just a snapshot, and I was taking the risk of being scratched or bitten any minute.

I hope you are all staying safe and sane?