Lost April, where did you go?

It was April's last Sunday, the month slowly cruising towards its end. And what a month it had been. If in his poem The Wasteland, written in the wake of World War I and published in December 1922, T.S. Eliot wrote that April is the cruellest month, then how cruel this year's April has turned out to be!

If we're talking about the weather, April was quite uncharacteristically unfickle this year, the proverbial April showers only making an appearance towards the end of the month. But the string of mild and sunny Spring days were quite juxtaposed with the cruelty of the pandemic which is taking the world as we know it by storm.

April was a month of constantly adapting to new realities, of finding new rhythms to our lives, which we found to be changed almost beyond recognition.

Not being good with change, to put it mildly, I was quite surprised at my own flexibility and perseverance. But while I am reasonably content inside Dove Cottage's cotton wool bubble, I am longing to be free and without fear again! It's the only wish I'd ask the Fairy Godmother to grant me. 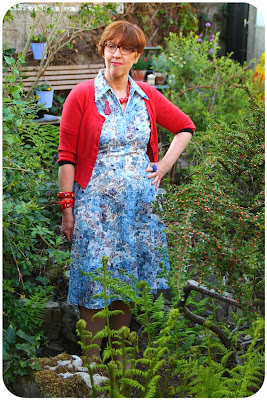 I'm so thankful for our garden in these days, and I think our garden is thankful too, relishing the fact that we've got so much time to spend on it. Time which, in that other life we had before the C word, we often didn't have to spare.

Anyway, back to April's final Sunday.

But wait, didn't you leave us with a bit of a cliffhanger in your last post, I can hear you think. That's right, when signing off I did tell you that Saturday still had a surprise up its sleeve ... 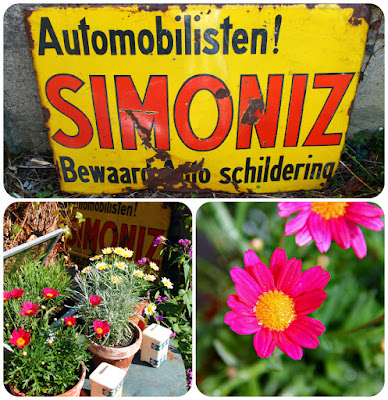 It was on Saturday night, when I was catching up with my blog comments, that I heard a shuffling sound in the street. Intrigued, I glanced through the window, to see that our opposite neighbour was dragging a cupboard outside, which he proceeded to tape a handwritten note to.  By that time Jos had joined me upstairs as he too was keen to know what was going on. We then saw Daniel, our neighbour, put an old enamel advertising sign in front of the cupboard. Turned out he was emptying his rented garage box and giving away some stuff for free.

It goes without saying that we wasted no time in getting hold of that sign, which is advertising Simoniz car wax, proclaiming to motorists that Simoniz protects car paint!

It's fairly big and quite rusty, and it's getting a place in our  garden! 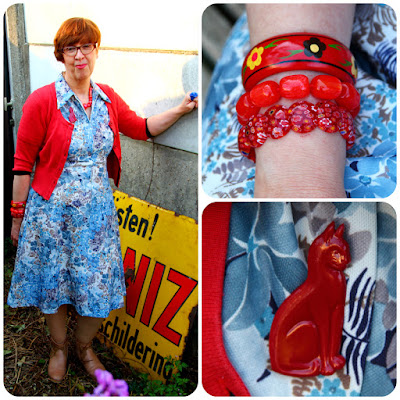 Although Sunday still had a sunny outlook, it was a tiny bit chilly, so I covered my short-sleeved blue floral frock with a cropped red cardigan, piling on a host of red accessories to keep it company. Perhaps even to harmonize with the red lettering on the sign!

The accessories in question consisted of a beaded necklace, a mix of bangles and bracelets and a cat brooch. 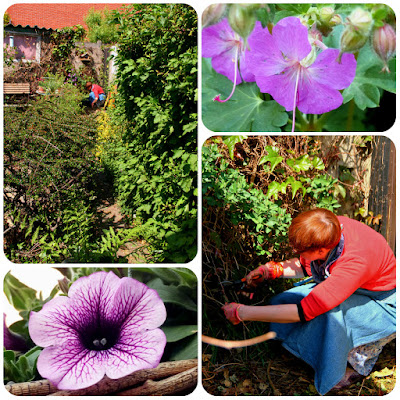 The small courtyard at the end of our garden, between the big shed - which has even more junk in it than the potting shed - and the garden wall, is a bit of a sun trap, but has been sorely neglected over the years. There's an accumulated layer of twigs and dead leaves and the honeysuckle growing up the wall at the end needed a lot of dead wood removed. Let's make a start with that, shall we?

The carpet of hardy geraniums in the side border is treating us to the first of  its many, delicate pink flowers (top right), while one of the hanging baskets is delighting us with intricately veined Petunia blooms. 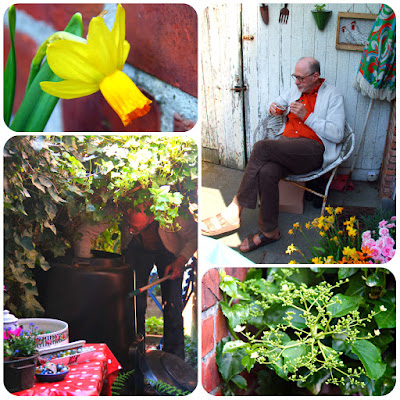 While I was pruning the honeysuckle, Jos was tending to the compost bin, and then sat enjoying a chocolate mousse under the awning outside our back door. It's alright for some!

And all the time, in a never-ending cycle, flowers come and go. Here's the last of the trumpeting daffodils and the first of the climbing Hydrangea flowers! 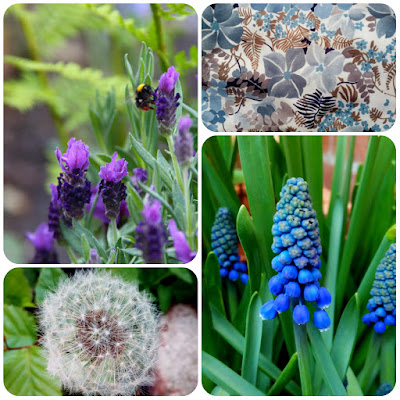 Bees are always flocking to our garden at this time of year. The main attraction seems to be the tiny and nondescript flowers of our Cotoneaster bush, which is teeming with a variety of bees and bumblebees. Nevertheless, they do seem to appreciate a change of diet and often make a beeline for our butterfly lavender.

Some even try to land on me when I'm dressed in florals!

Dandelions do not get pulled up in our rustic garden, into which I'll be planting out these grape hyacinths after they finished blooming in their pot. 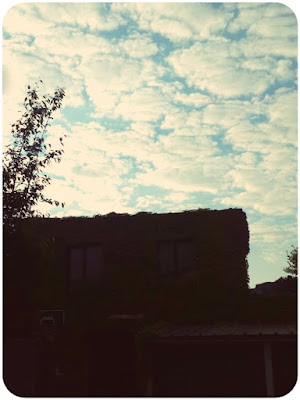 It was back to work on Monday, always a wrench after my four-day weekend. On our way to our garage box, I snapped these weird but beautiful clouds with my phone's camera.

While we are renting a separate garage box, the complex also has communal parking spaces, and we often make use of the nearest one for outfit photos. Much to our surprise, the area has recently been repainted, so that you will no longer get to see the brick wall with its picturesquely crumbling paint.

When the complex's owner told the guy who parks his car in this spot that he would be painting the lower half in a darker colour, the guy begged him not to since he knew we were using this area as a photo studio! How amazing is that? 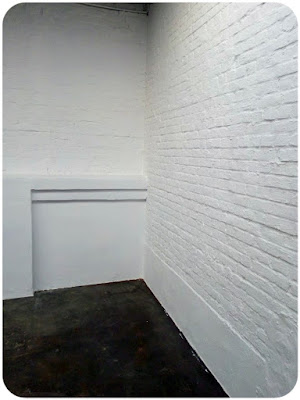 My day at the office was an extremely busy one, so that I was more than ready for my in-between day off on Tuesday.

It was a bit of a dismal day, and I didn't feel up to doing much, so I just indulged in some pottering and reading. 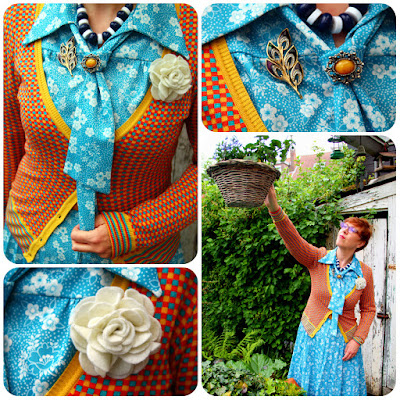 If Spring had still been very much present on Monday, there had now been a considerable drop in temperature, which was accompanied by some of those late April showers I mentioned before.

Time to wear this long-sleeved frock which hadn't seen the light of day all Winter.

Admittedly, its sky blue colour, with a scattering of white flowers and dots, does lend itself more to Spring than Winter.  I added an enamelled peacock feather brooch - charity shopped in Llangollen last Summer - and pinned a yellow hearted brooch to the dress's tie collar. 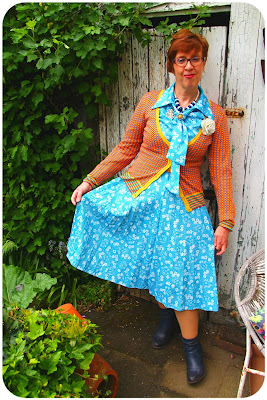 Oh, and it's got a wide pleated skirt, perfect for twirling!

On top went a charity shopped checked and striped cardigan in yellow, orange and turquoise, which I adorned with a felted flower corsage. 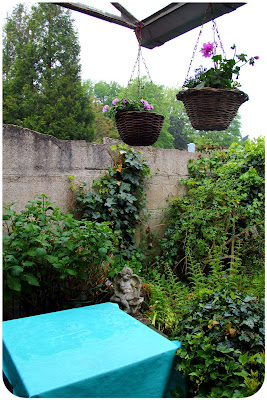 We had to be quick as the first drops of yet another shower were starting to fall while we were taking outfit photos.

I couldn't resist taking some final snaps of the garden, in all its lush green finery, from the back door.

After a damp and dreary office day on Wednesday, there seemed to be a slight improvement in the weather on Thursday. 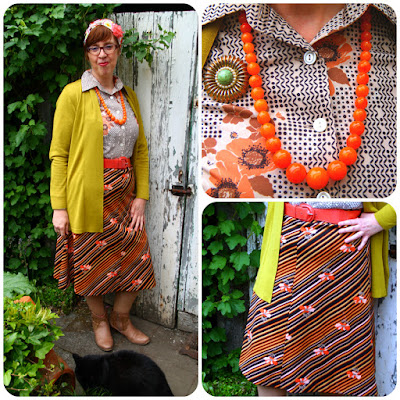 Still chilly enough for long sleeves, it was my plan to wear a skirt and blouse that day. The skirt in question is one of my all-time favourites, vintage 1970s with diagonal black, grey, brown, orange and coral stripes dotted with flowers. It had become a tad snug, which is why I hadn't worn it at all since January 2018. Or so my blog tells me.

Needless to say, I was more than overjoyed when it turned out to be a perfect fit again. Must be  all the worrying and working in the garden. Oh, and no mid afternoon snacks at work!

The blouse I selected is from the same era and repeats the browns and oranges of the skirt. 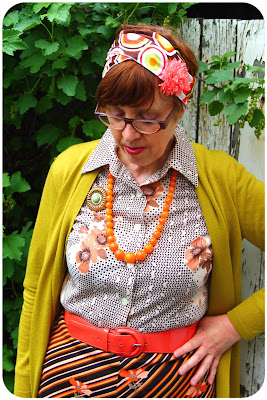 More orange was added with my belt and beaded necklace. You may also recognize the brooch with the green mottled stone which I already wore in my previous post. The long chartreuse cardigan was swiftly thrown over to combat the chill of the day.

Another bad hair day (#coronahair) prompted another head scarf trial. I clipped a hair flower to it to keep it in place.

We'd initially planned another trip to the garden centre on Friday, but when we realized that it might turn out to be too crowded as 1 May is a public holiday in Belgium, we went on Thursday instead. 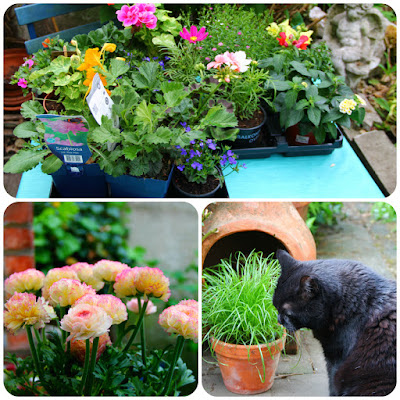 Inevitably, we brought home another cartload of plants, mainly consisting of annuals, with one or two perennials, destined for our new border,  thrown in.

And kitty grass for Phoebe, who was pleased as punch and wasted no time nibbling it.

Will be back with further home and garden adventures soon.

In the meantime, I hope you're all staying safe, wherever you are!