Staying in the same place, just staying out the time

At I'm writing this, the glorious Spring weather we have been blessed with for the last few weeks has deserted us, leaving the usual grey skies and rain in its wake.

Not entirely unexpected, taking into account our usual April capriciousness, it has nevertheless forced me to leave the garden and spend the day indoors.

Being cooped up inside doesn't generally bother me, and it's certainly something we're all having to get used to one way or another. I can always find plenty to keep me occupied! Today, however, I was lacking the inclination to do any chores around the house. Instead, I set myself the much more pleasurable task of writing another blog post, this time backtracking to the weekend before last. 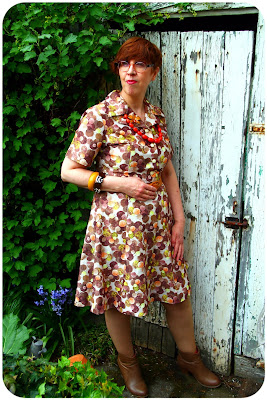 As often seems to be the case, my initial weekend energy which resulted in a hustle and bustle of activity on Thursday and Friday, had somewhat fizzled out by Saturday.

We slept late and had a late cooked breakfast, with the last of the big chocolate Easter egg for dessert.

By the time we'd done our usual Saturday morning wash load and folded everything away, the day's initial sunshine had disappeared, and there might even have been a smattering of rain to quench the garden's thirst. 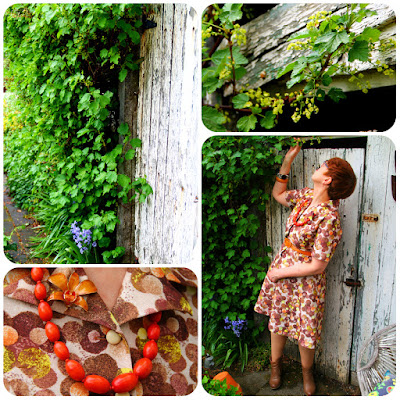 That massive bush encroaching on our ramshackle potting shed is our old white current, planted soon after we moved to Dove Cottage over twenty years ago. Over the years, it has been providing us with more fruit than we can ever eat. But no worries, as the birds often get away with a large portion of it, to which they are most welcome. Jos usually manages to produce a couple of pots of jam out of what's left as well. 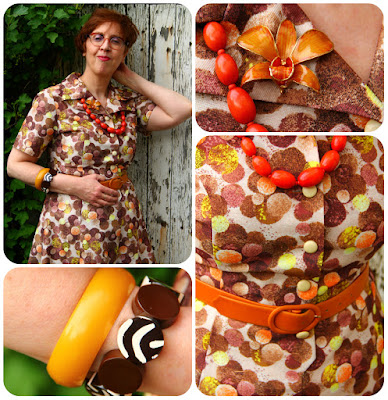 The dress I'm wearing is one of my first ever Think Twice finds but, although I still love it to bits, it hasn't been getting as many outings as it should have. To be honest, I do think it is a bit short on me, leaving my knees - not my favourite body part - exposed whenever I'm sitting down or reaching up.

Still, its print of brownish, orange and yellow balloons never fails to cheer me up.

My accessories that day were a tan belt, an orange beaded necklace and a yellow plastic bangle, all of which were charity shopped. As was the brown and white bracelet, which I picked up in charity shop in Ludlow, Shropshire, in 2018. The orchid brooch, which doubles as a pendant, was a flea market find. 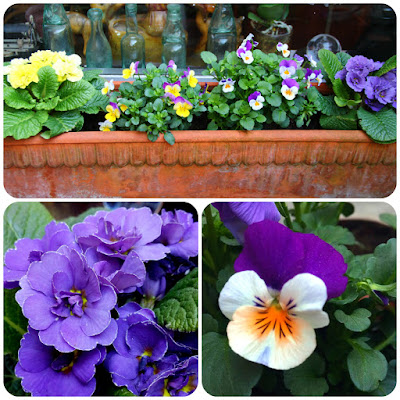 Here's the terracotta window box on our dining room sill, which is at the end of the passageway next to our kitchen. I planted it with those ubiquitous early Spring favourites, cheery-faced pansies and proud double primulas. By now, while the latter are still going strong, the pansies seem to have had their time, and will soon need replacing.

I spent the rest of the day doing my usual mix of pottering and reading. Oh, and my journal tells me that I cut Jos's hair, using clippers. He keeps insisting that I didn't do too badly, although for some reason he's not so keen on having his photograph taken these days! 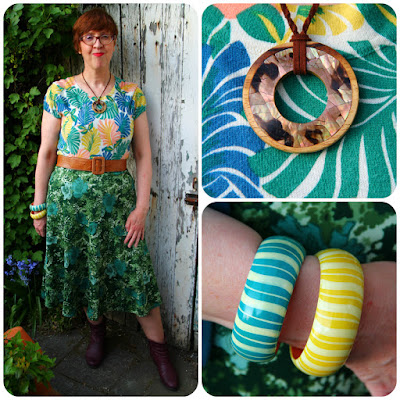 I'm so thankful I had mine cut and coloured he week before we went into lockdown, so that it's not too bad yet, especially when I've just washed it.

I would love to tell you what I did on Sunday, but unfortunately it's a complete blank, as I forgot to make a journal entry at the end of the day.

But at least I can tell you what I was wearing, having opted for a skirt and a short-sleeved jumper in a mix of floral prints.

The skirt was yet another Think Twice find, while all the rest I'm wearing here were charity shop finds. The jumper is another King Louie delight, while the painted wooden bangles were part of a haul of seven, all found on the very same day in October last year. 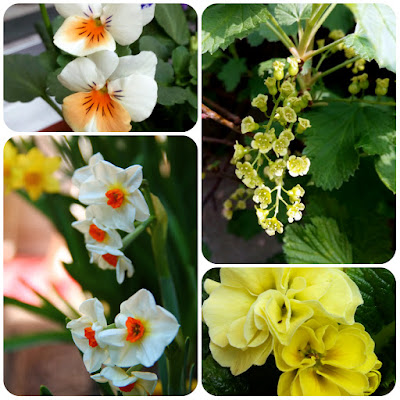 I'm soaking up some late afternoon rays of sunshine and enjoying the spoils of our garden, including a glut of newly opened sweetly scented Tazetta daffodils, their creamy white petals surrounding bright orange cups.

On the top right is one the countless of the white current's flower clusters, which are slowly but surely transforming themselves into juicy berries. 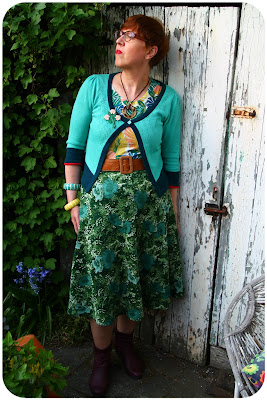 Inherited with the garden are various clumps of ferns. They seem to multiply year after year and are turning the garden into a veritable jungle almost overnight as their prehistoric looking fronds start unfurling one by one. 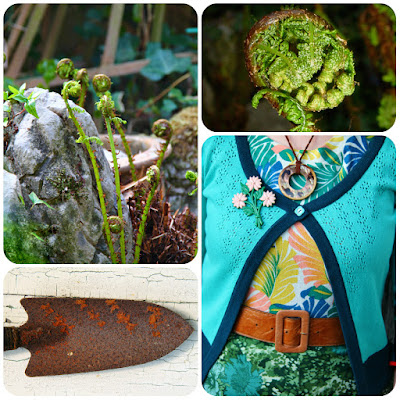 It was a bit chilly that day, so I topped my outfit with another charity shopped cardigan from retro brand Zoë Loveborn, to which I pinned a big, modern flower brooch.

Temperatures were on the up again on Monday, which was an office day, and kept climbing towards the low 20s on Tuesday.

While Jos went to the drinks supermarket and the newsagents - buying a paper for an elderly neighbour in the process - I gave the bathroom a perfunctory clean. 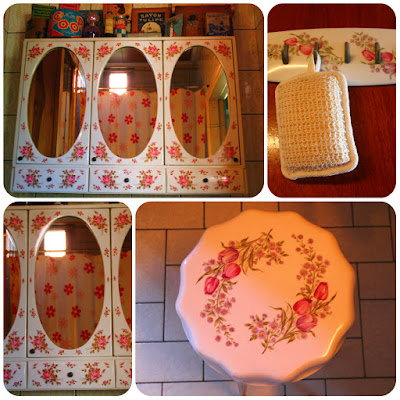 The perfect opportunity to show you some of our bathroom treasures.

The vintage mirrored and rose-sprinkled bathroom cabinet is made from a very sturdy and heavy plastic called Ornamine, by the French company Gilac. It dates from the late 1950s or early 1960s and cost us all of € 8 in a charity shop.

Made from the same material but in a different design are the hooks and the bathroom stool, which were flea market and charity shop finds respectively. We're still on the lookout for a loo paper holder! 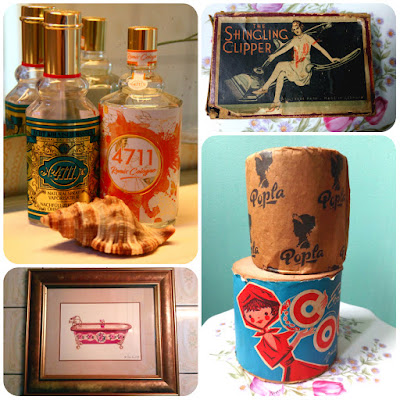 Speaking of  loo paper, people used to laugh when we told them we'd bought vintage rolls of loo paper at a flea market, but at least we've got some back-up if the shops run out again as a result of people's hoarding tendencies.  And I'm sure the Shingling Clippers might come in handy as well.

The 4711 eau de cologne isn't just for display purposes. Next to it is a recent Summer edition of the old classic, which I used to keep at the office. It smells heavenly!

Finally, on the bottom left, is one of the baths from Bath, so called as we bought the prints in Bath on one of our UK holidays. 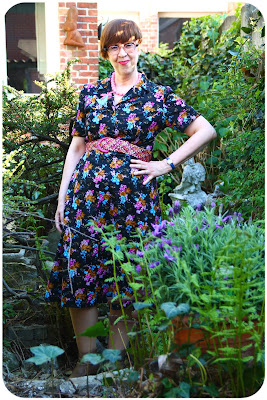 The garden is coming along nicely, isn't it?

Here's another frock I haven't worn in years, but with good reason. It was the dress I wore the day my Dad was committed to hospital in 2016, mere days before he passed away.

After almost 4 years, the lure of its fabulous blue, pink and russet flower print, enhanced by the dark background, proved to be too strong to resist. 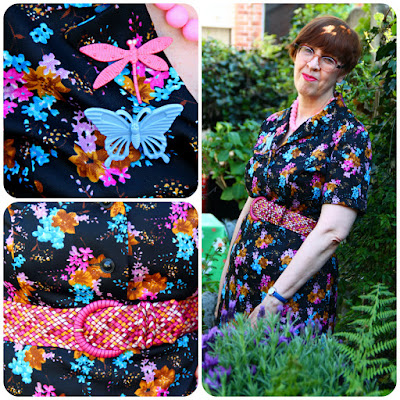 I added a dragonfly and a butterfly to frolic among the flowers and cinched in the waist with a pink, yellow and cream woven belt.

Our garden centres having re-opened during the weekend, we couldn't resist driving down to our favourite one, fully expecting there to be a queue. But on this sunny Tuesday afternoon, there wasn't, so, donning gloves and armed with hand sanitizer, I hesitantly stepped inside. 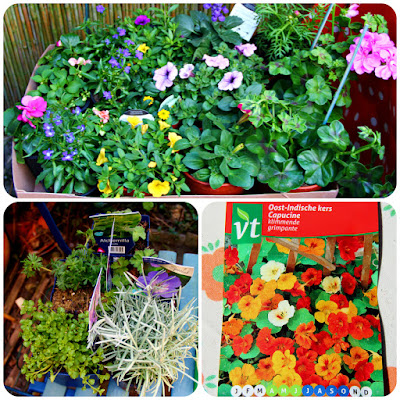 But the place is huge, especially now that their glasshouses full of annuals and summer flowers are open, so that social distancing wasn't a problem at all.

As well as a well-needed bag of garden compost, I bought a whole tray full of annuals, a couple of perennials, a curry plant (Helichrysum italicum), a huge pot of butterfly lavender and some Nasturtium seeds. 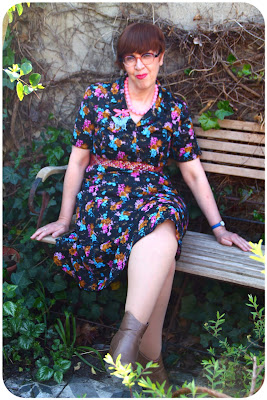 I'm sure you can imagine how I spent the next 4-day weekend?

But that, my dears, will be for next time.