The passage of time is a strange thing indeed. All too often, time seems to go in leaps and bounds. Yet sometimes time is a waiting game when the days are passing slowly, knitting themselves into a shapeless tapestry of weeks, one all but indistinguishable from the other.

The clock is ticking away the hours, its hands moving slowly towards the next, and time is a vacuum, a room full of memories with dust motes dancing in a sunbeam.

If I didn't keep a journal - both serving as a record of these extraordinary times and an actual diary - I wouldn't remember what I'd been doing from one day to the next. 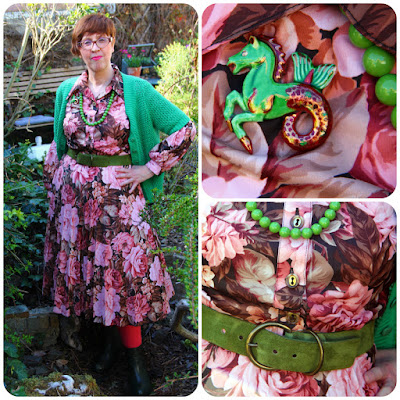 Often, when I wake up, I can't remember what day it actually is. As my office days are Monday and Wednesday, this is especially true in the long stretch between Tuesday and Sunday. But I'm not complaining, as much to my surprise, I rather like being at home. Will they make a housewife of me yet? Well, I guess that would be a bit of a stretch!

But I'm rambling on again, so let's take the time machine for a short trip back into the past, and show you what I was wearing on Easter Monday. 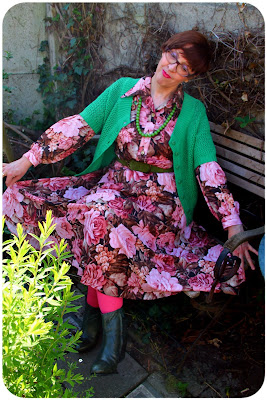 There had been a considerable drop in temperature overnight, which warranted the return of the long sleeved frocks. In fact, I had this one hanging ready for a week or two, so it was now or never for this vintage dress with its blowsy flower print and full, pleated skirt.

I accessorized it with all kinds of green things, starting with the moss green suede belt and my ceramic Merhorse brooch. A slightly longer string of bright green beads and a short-sleeved chunky knit cardigan completed my outfit. I even wore green wedge-heeled ankle boots but opted for bright pink opaques for contrast. 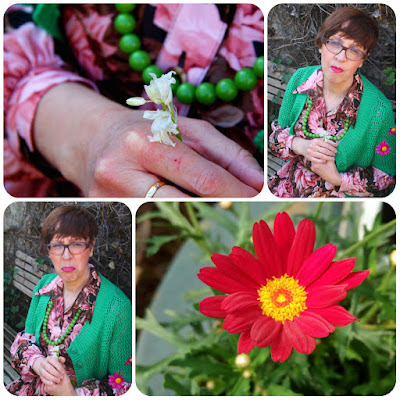 If you're wondering about my sad face, that's because we'd just managed to flatten the one and only white bluebell growing in our garden! Poor, poor thing!

Poor Jos as well, as he'd managed to scratch his hand while tying up the piles of woody prunings at the back of our garden, ready for council collection later that week. It was a relief that they actually came, as we wouldn't have known what to do with them. It's not that we have that much room to spare in our handkerchief sized garden. 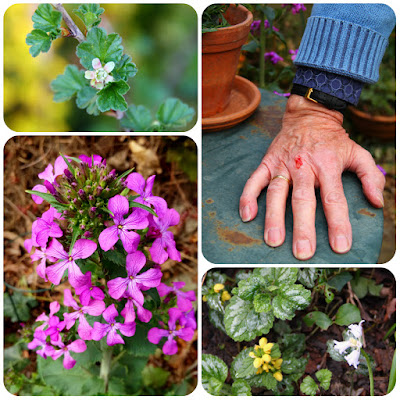 It's heartwarming to see that our little plot is thriving in spite - or perhaps because - of it all.

Our straggly gooseberry bush has been producing its first flowers (top left) while our honesty has been blooming as if there is no tomorrow. In fact, they are all but over by now, the spent flowers slowly transforming themselves into those well-loved silvery discs.

And there's the single white bluebell on the bottom right, mere minutes before its unfortunate demise. 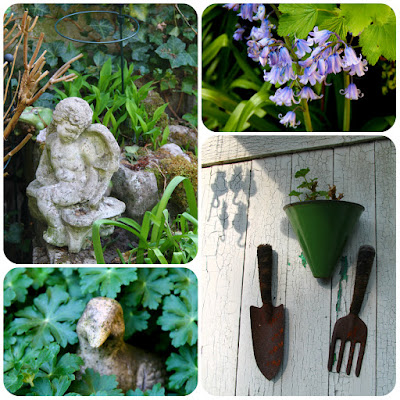 The green foliage behind the garden angel will soon be full of fragrant Lily-of-the-Valley while the stone dove is only just holding its head above the ground-covering hardy Geranium, which will be a sea of pink in the weeks to come.

It's always a delight to see our bluebells appear next to the potting shed, where they can be admired from our kitchen window.

The green enamel cone (and its twin) is planted with last year's pink Pelargoniums, which once again seem to have survived our mild Winter. 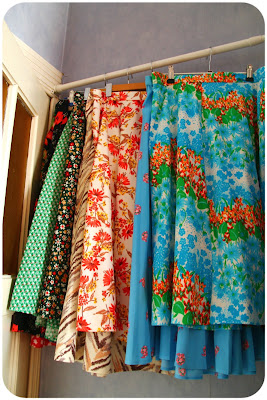 The day had been far too chilly to spend it in the garden, so I thought I'd crack on with my wardrobe changeover. I started with the skirts, folding away the heavier woolly Winter ones in favour of a host of cheerful Summer lovelies. I always keep a selection of these out - they are hanging from a rail Jos suspended between the spare room door and a tall shelving unit - so that I actually remember to wear them.

This was the easy part, as the out-of-season skirts do not hibernate inside the famous linen chest but live on a shelf in one of my wardrobes. 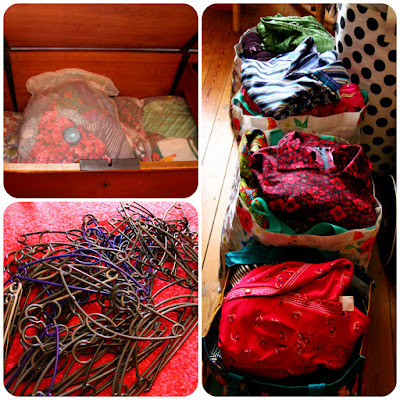 The linen chest - a family heirloom which used to belong to Jos's grandparents - is huge and it is where most of my out-of-season clothes are packed away inside vacuum bags.

So, first I freed up a load of hangers by putting all but a small selection of my long-sleeved dresses into large shopping bags. Then out came all the Summer frocks, which I hung up until I ran out of hangers. There's still a bag of them left. They are mostly sleeveless ones which will gradually replace the long-sleeved dresses currently still in my wardrobe. 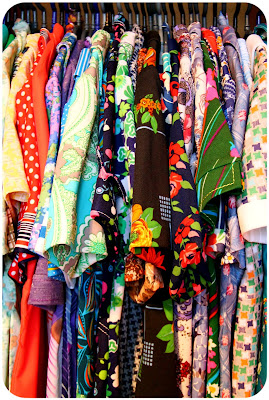 Can't wait to wear them all!

After that, I decided to call it a day, leaving the vacuuming of the bags of Winter dresses for another time.

And then there's my boots to be put away and my Summer shoes and sandals to get out! Instead I just spent the rest of that day reading my current book!

It was a wrench to get out of bed and leave the safe bubble of Dove Cottage on Tuesday to go back to the office. And Wednesday day too! This working lark really is far too exhausting. 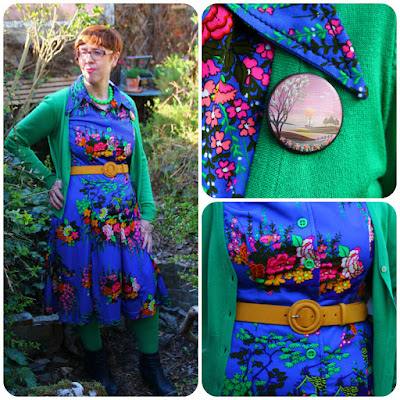 Adopting Sheila's maxim of using clothing as armour, I decided to wear full-on colour to make me feel better. And guess what: it worked!

This bright blue frock must be one of my most colourful, with its print of pink, green, yellow, orange and red flowers. Oh, and there's the odd pagoda tool!

Again, I opted for green accessories, from which I deviated by choosing a yellow belt.

The brooch which I pinned to my cardigan has a slightly oriental landscape on it in keeping with the pagodas on my dress. 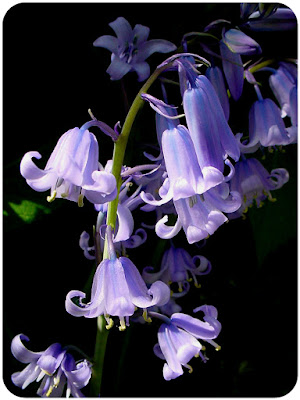 Back in the safety of our garden after work, I spent some time bothering playing with Phoebe. I'm not sure if she likes it very much if we intrude on her domain!

We found the frog hidden beneath the ivy which was slowly but surely encroaching on our little pond. He used to make a "ribbit" sound when you walked past him, but alas he now refused to speak, not even after we change his batteries. 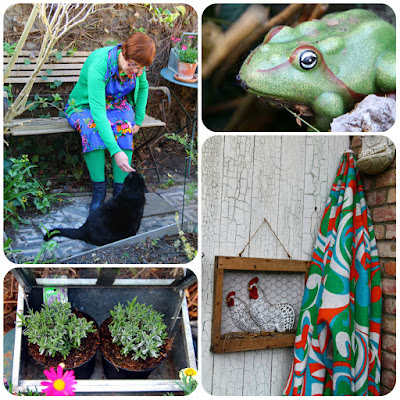 The Easter weekend had been sunny and warm, and now that our Lilac has gone, so has the shade it provided for our bench. Time to bring out our funky 1970s parasol. A family heirloom as it used to belong to my parents. 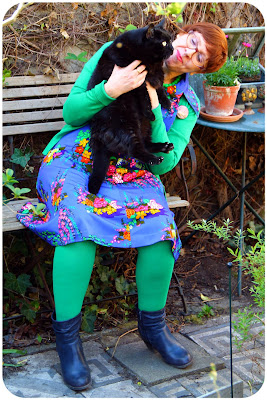 Look at Phoebe's alarmed face when I picked her up. We had to be quick, as she was squirming and complaining loudly.