The world moves in slow-mo

I'm still finding it hard to get my head around the fact that the world keeps moving - in slow-mo perhaps, but moving nonetheless - in spite of the fact that chaos is reigning all around us.

At times, even my preferred la la la approach isn't working and, whether I like it or not, I have to face facts which are beyond my control. Enter Friday before last, when I was told that my working hours were being reduced to a mere two days a week for the foreseeable future. Work had been slowly but surely grinding to a halt when one by one countries the world over went into variations of lockdown and international flights, which are a mainstay of our line of business, were becoming a rare or even non-existent commodity. 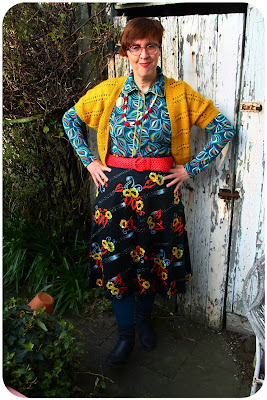 At first, I cried hot tears at finding myself, albeit only partially and temporarily, unemployed: another blow to my already battered and bent-out-of-shape psyche. But then I had some sort of epiphany and actually started looking forward to my days off.

Hadn't I been moaning for years that I would love to work less and have some more time for myself? Okay, I wouldn't be able to go outside much, but now was my chance to do all the things I never seemed to have time for!

The situation wouldn't leave us as poor as church mice either, especially with no flea markets, charity shops and my beloved Think Twice to go and spend my hard earned money in. 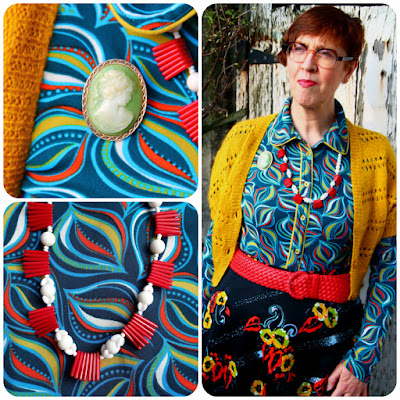 Waking up on Saturday morning, it was as if I'd flipped a switch and, although my head seemed to be filled with cotton wool, I hadn't felt as good in weeks. That was over a week ago, and I haven't had another anxiety attack since. Result!

That morning, I happily played around with my wardrobe, digging out a black vintage skirt printed with a yellow, red, green and blue flower and leaf design. To keep it company, I chose a teal based blouse with one of my favourite prints ever. It's from a retro label called Zoe Loveborn, and I have a dress in exactly the same print but with red trim and buttons (see here). The dress was a retail buy many years ago, but I picked up the blouse at a flea market in October 2016. 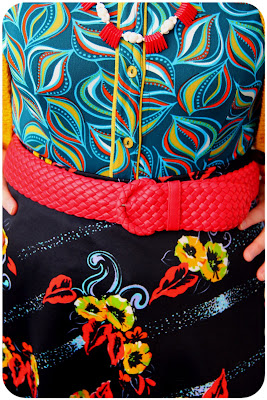 I added a green cameo brooch, a red and white vintage necklace and a red woven belt, throwing over my yellow batwing cardigan - H&M by way of a charity shop - when we went out into the garden.

I've got Sunday's outfit for you as well, but first I urge you to fasten your seatbelts, as I'll be whizzing you back to Friday to take you on that promised lunch break walk.

As it was set to be another glorious blue-skied day, I even took my proper camera to work. 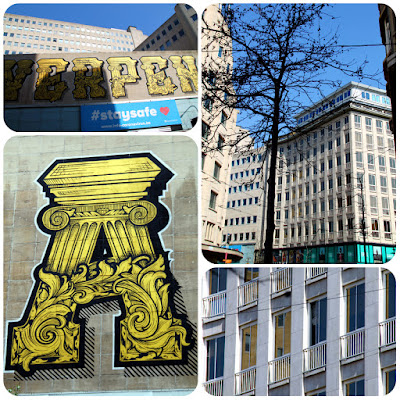 Leaving the office at 12.30, I skirted our office building, arriving at the concrete jungle beyond.

That's my office building on the top right. I'm on the 5th floor. The half open window with the half pulled up blind in the detail on the bottom right: that's the floor where I'm spending my working days.

From my lofty windows, I look out on an ever-changing cityscape, which since almost two years includes the ornate lettering spelling Antwerpen (top and bottom left) created for an event titled Antwerp Baroque 2018. Rubens Inspires. Notice the #Staysafe banner immediately below. 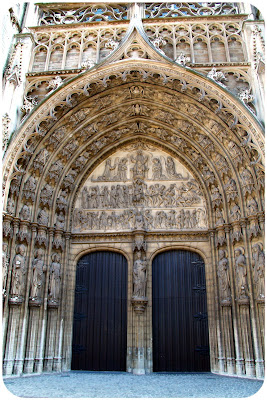 I can see its gracefully tiered 123 metres high spire - now covered in scaffolding - from my office window, but my walk took me past the cathedral's main portal, with its sculptures depicting the Last Judgment.

There were only handful of people passing through the triangular square in front of the cathedral. Lined with a row of souvenir shops at its other end, it is usually teeming with tourists, making photography almost impossible.

On the bottom right is part of the gracious wrought iron construction crowning the so-called Quentin Matsijs well, named after its creator, a blacksmith and painter, who lived from 1466 to 1530. 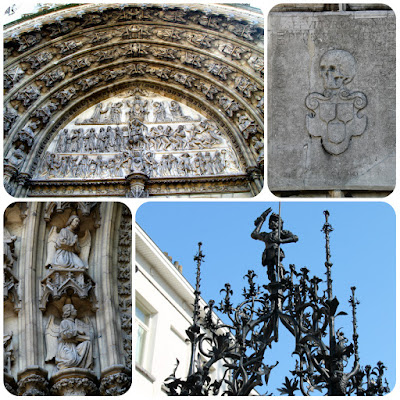 Another tourist honey pot is the Grote Markt (Market Square), which is bordered on two sides by a series of magnificent Guild Houses. These, however, aren't as old as they might appear at first glance. As the original houses were destroyed in a fire in 1576, they were rebuilt in Flemish Renaissance style, but revamped again in the nineteenth century, resulting in the current, lavishly decorated, houses. 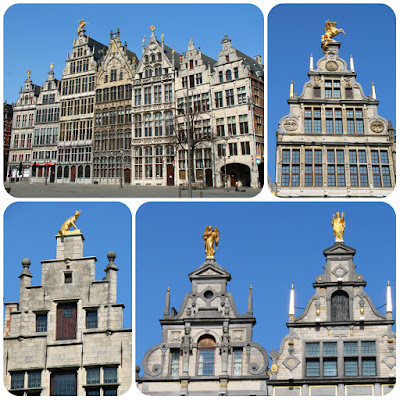 On this fine sunny day, with its azure blue sky, the gilded statues topping the houses were positively sparkling.

Another prominent feature of the square is the Brabo fountain and sculpture in front of the town hall. This bronze sculpture dating from the 1880s tells the story of Silvius Brabo and Antigoon. The latter was an evil giant who, as legend has it, cut off the hands of all those who refused to pay tolls to cross the River Scheldt. After the heroic Brabo finally managed to slay him, he returned the favour by severing the giant's hand and throwing it into the river. 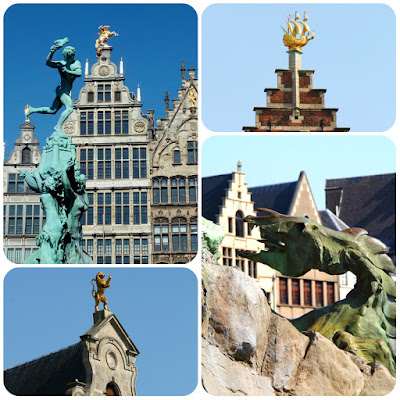 Before retracing my steps, I walked towards the river to admire the row of rusty gabled hangars with their decorative ironwork pediments. The ornaments they are topped with include typical maritime attributes like anchors and ship's helms.

On the top right is one of the stone lions guarding the cobbled slope up to the waterfront promenade, which also contains a bronze sculpture of the goddess Minerva (bottom left), created by the Italian artist Marcello Mascherini, and dating from the 1950s. 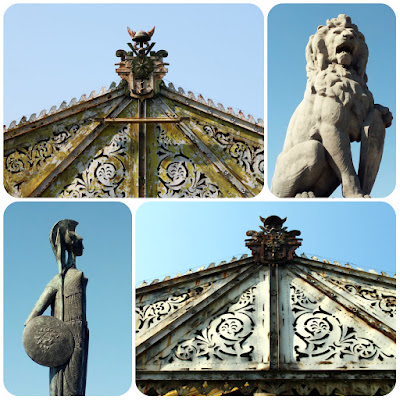 On my way back to the office, I randomly photographed some of Antwerp's street corner and other Madonnas. I do confess to having a weakness for them, in particular the street corner ones, which I think are one of Antwerp's most charming features. There must be about 200 of them! 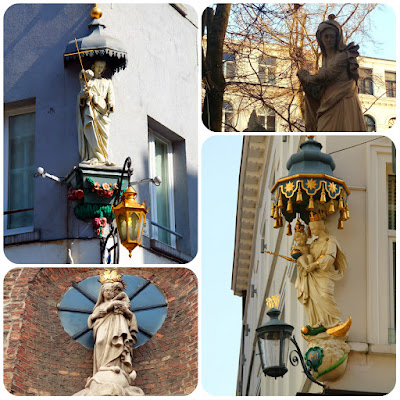 Freshly back from my short time travelling trip, here's what I was wearing on Sunday.

Although I found this dress with its giant flower print in Think Twice's sales back in December, this was actually its first wear. I definitely needed all the colours that day! 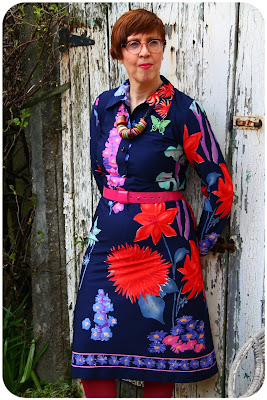 It's from the Finnish Vinetta label and I think its purplish blue is the perfect backdrop for the riot of colour provided by the flowers.

The print is really amazing, with hardly any repeat in the floral pattern. 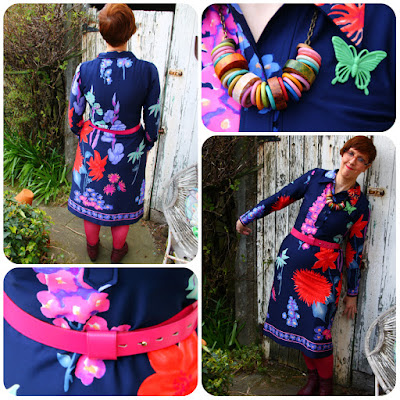 I picked random colours from it for my accessories, wearing a bright pink belt and ditto opaques and  a green butterfly brooch.

As for my necklace, there was only one likely candidate: my chain of multi-coloured wooden discs, bought from Accessorize many years ago, and still a firm favourite. 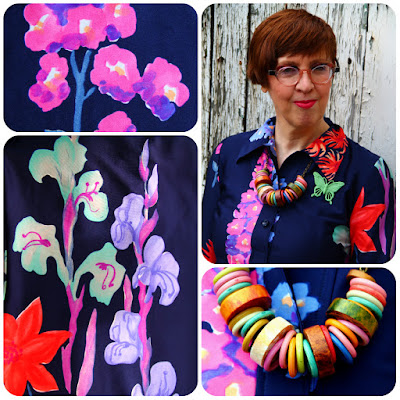 And even though we weren't leaving the house that day, I didn't want to leave the side down, and put on make-up like I do on any other day, I only skipped the mascara, but not the lippy. After all, even in these trying times, life simply looks a whole lot better when one's wearing lipstick!

I'll be returning soon with tales of my exciting life as a semi-unemployed in Corona times!

Posted by Polyester Princess at 19:22