Hello, it's me again, your lockdown reporter from that little scrap of a country called Belgium.

You might have noticed that I upped my posting frequency in these turbulent yet quiet times. Nevertheless, same as I was pre-lockdown, I'm still lagging behind a week or so, which is why I still have to tell you about what happened in our little bubble on Easter day.

But first things first! Let's have a look at what my wardrobe insisted I wore on this sunny Sunday. 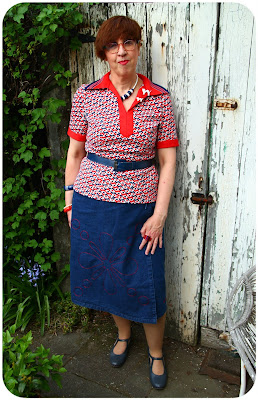 What about some red, white and blue? Well, yes please!

The blue was mostly provided by this vintage Lee Cooper denim wrap skirt, which was a gift from my friend Ingrid last Summer. As I had been unsuccessfully trawling the charity shops for the perfect denim skirt, it couldn't have come at a better moment. The skirt came from Think Twice, and although she initially bought it for herself, she decided it would have a better home with me!

The red, white and blue vintage top was a Think Twice find as well, while the belt, bracelets, necklace and cat brooches were charity shop finds. As were the amazing vintage style shoes! 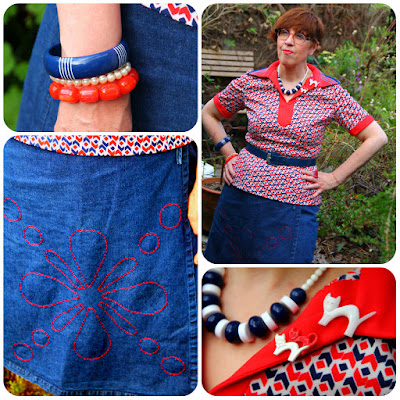 I admit it wasn't one of my best days and at first I was at a loose end on how to spend it.

All around us, people seemed to be having family gatherings and picnics in crowded parks, which greatly added to my feeling of unease. How can people be so careless and have so little discipline? But I'm sure you haven't come here for a rant, so why don't I show you some of Dove Cottage's treasures instead? A word of warning though: not suitable for those with minimalist tendencies!

I have been mulling over this post for a while now, as I wanted to follow the example of my fabulous fellow bloggers Beate, Veronica, Fig and Monica, who recently posted about what's on their dressing tables. 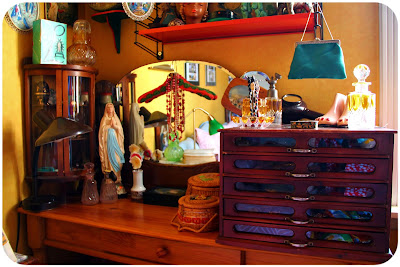 The problem is that I don't have a dressing table as such, unless you count the side table in our bedroom, on which some of my stuff is displayed. A bit of a poor excuse for a dressing table, I know, but it'll have to do for now.

The table itself is a pine one which we picked up from a DIY store when we were doing up Dove Cottage all of 21 years ago. It originally lived in our dining room where its drawer - now a jumble of assorted bits and bobs - held our best cutlery.

The mirror is 1930s and was a charity shop find, and so was the semi-circular display cabinet, which holds a mix of small treasures, including some family heirlooms. 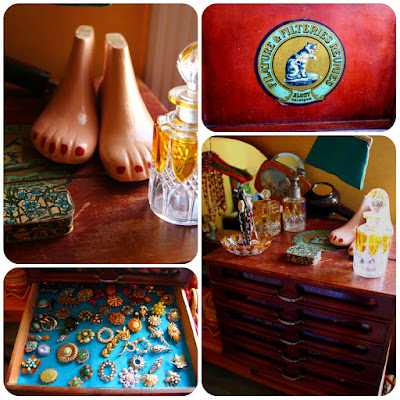 At first, my makeshift dressing table had oodles of space for displaying things but then one of our best finds ever threw a bit of a spanner in the works in  December 2018.

It was at our monthly indoor flea market that this small chest of wooden, glass-fronted drawers made my heart beat faster. It's the kind of cabinet which was once used to display sewing threads in  haberdashery shops, and which I had been lusting after for quite some time. Most of those we'd come across until then were eye-wateringly expensive, but this one was more than affordable as its top was cracked.

The perfect storage solution for my growing collection of brooches. Well, at least some of them!

You will have probably noticed the feet with their varnished toenails which are displayed on top of the cabinet. They too were a flea market find. Made of some kind of moulded plastic, they are advertising a bygone brand of shoes. 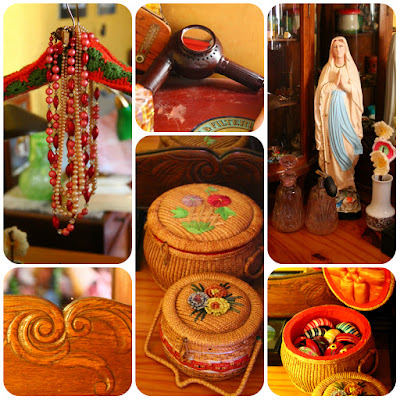 The clothes hanger with its crocheted jacket - another gift from Ingrid - is holding two pearl necklaces which used to belong to my great aunt Josephine, while the Bakelite hair dryer, obviously for display purposes only, was found in a vintage shop in Narberth, Pembrokeshire.

Presiding over it all is a glow-in-the-dark statue of Our Lady of Lourdes. She was a charity shop find, as were the wicker sewing baskets, which I seem to have a weakness for, the biggest one holding painted wooden bangles. 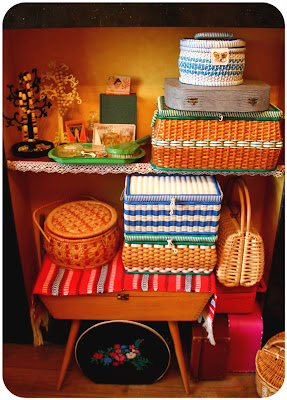 The redundant fireplace in our bedroom has been turned into a little storage nook, where you can see more of my collection of wicker and plastic sewing baskets, all but one - the round one on the left is my actual sewing basket - roped in for holding necklaces, bangles as well as flower clips and corsages.

The shelf came from my parental home and used to be in my childhood bedroom, while the lacy border added to it was yet another flea market find. 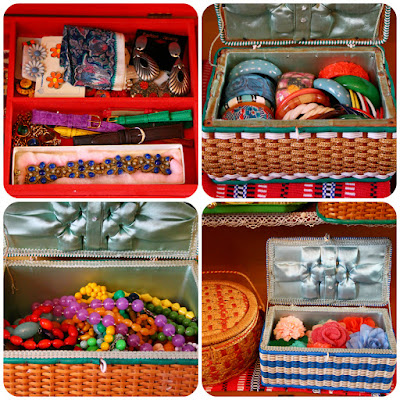 The Mid-Century jewellery box on its spindly legs was bought from vintage shop in Belgium's west country while on holiday. I've covered it with a small charity shopped table cloth to hide its slightly damaged top. The trays inside hold my collection of vintage clip-on earrings, spare watch straps and my great aunt's bracelet, among other things. 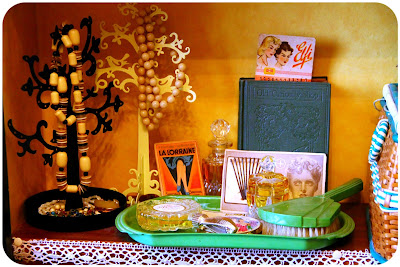 The two jewellery trees and the book, Charles Dickens's The Old Curiosity Shop, were charity shop finds, while the green tray and matching brush were found at a car boot sale in Cardigan. 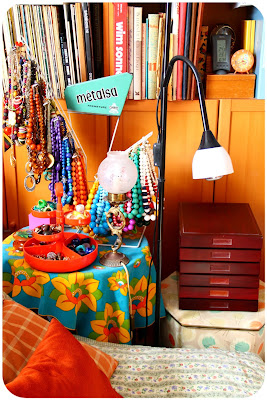 But there's still more to come!

Let's move across the landing to the spare room, which is the same size as our bedroom, and doubles as our study and library as well as my dressing room. 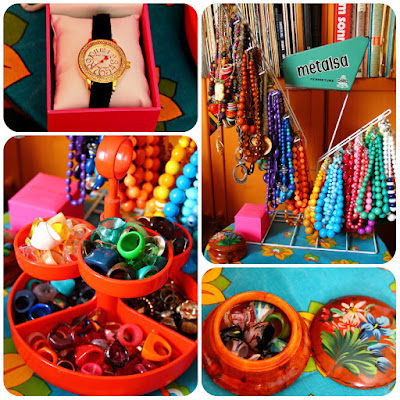 The main part of my necklaces lives here and is stored on another haberdashery shop display unit, this one originally holding zips. It came from a delightful vintage shop called Expo 58 in a town about one hour's drive from Dove Cottage.

The orange Better-Maid party dish is home to my rings, as is the treen box, which holds my more expensive fused glass ones.

The watch in its pink box is Betsey Johnson and was a gift from my ex-boss's wife. 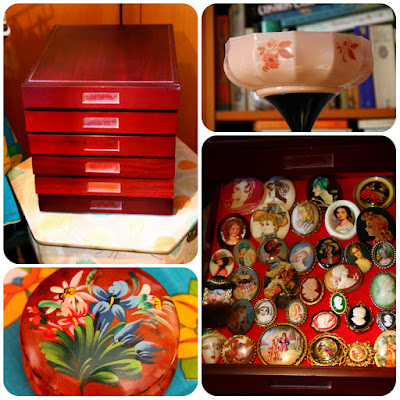 And here is where the rest of my brooch collection is stored. The individual dark wooden drawers were given to us by one of Jos's friends, who originally used them to display his collection of coins.

The lamp, incorporating an uplighter and a reading lamp, is from the Swedish furniture shop, but we've replaced the uplighter's shade with an original 1930s glass one. 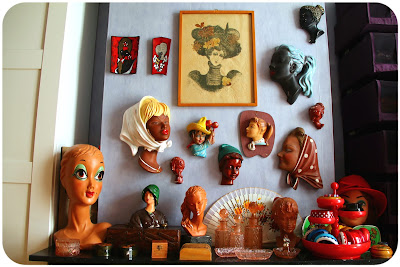 Turn around and you get a view of the mantelpiece at the other side of the room. The chimney breast is nicknamed the Wall of Heads, for obvious reasons. There's still about one third of space left if we go all the way up to the ceiling!

On the mantelpiece itself is my beloved Twiggy on the far left. She's usually wearing a hat but I took it off so that you can have a better look at her. She used to have a job displaying hats in a vintage shop, but I was able to buy her at a reasonable price when the shop closed down. 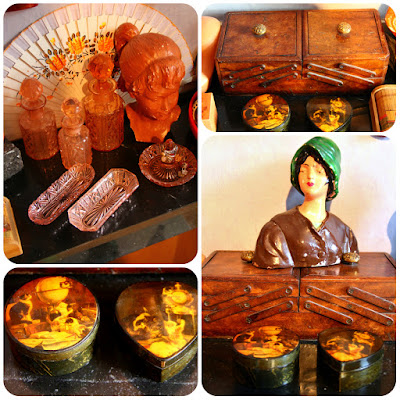 The pink glass vanity set was a gift from one of Jos's ex-colleagues, while the cat boxes are from Past Times, the same shop where we got Baby Gargoyle, who was featured in my previous post.

You would be forgiven for thinking that the dark wooden box on the right is a sewing box, but it isn't. It's a jewellery box and its shallow drawers currently hold my small collection of scarf rings picked up during my eternal search for vintage brooches.

The plaster lady displayed on top of it was a lucky find at a charity shop many years ago, and will always remain a favourite. We'd already paid for our purchases when I went back into the shop to make use of the toilet. On my way out, I found her sitting on top of a cabinet, so I had to queue at the till again, trying to convey to Jos in sign language what I was doing, as this was before we had mobile phones! 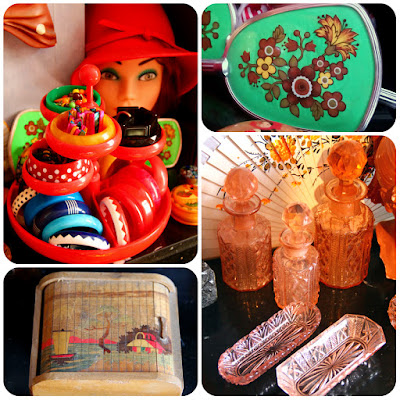 Here's the twin of my other party set, roped in for storing more bangles which, like the rings and necklaces, I tried to group by colour.

That's mad Sybil lurking behind it. She's a hairdresser's model we found for € 0,50 in a charity shop. She's from the well-known hair and beauty brand Sibel, hence her name. And I guess I don't have to explain the mad part ...

Between the bangles and mad Sybil is a vintage hair brush and hand mirror set we bought at our charity shops' much maligned retro event back in 2016. 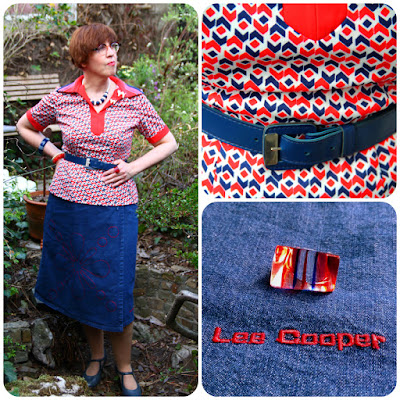 Back outside for a well-needed breath of fresh air and to show you a couple of details from my outfit, including the stitched Lee Cooper label on my skirt and my funky plastic ring.

I hope you'll join me again for the next episode, but in the meantime: stay safe, my dears!

Posted by Polyester Princess at 14:07