Alas, our holiday in Wales is well and truly over, come and gone in the blink of an eye.

After a smooth journey home, without any hitches whatsoever, we arrived back at Dove Cottage on Saturday night.

But, as with all stories, let's begin at the beginning. 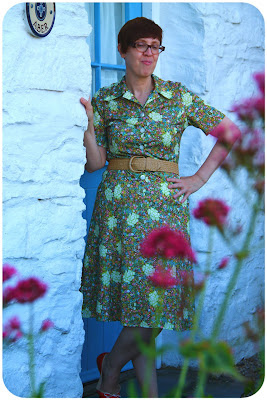 Two weeks ago, on Saturday, sunshine accompanied us all the way to St. Dogmaels in North Pembrokeshire, where our cosy holiday cottage was awaiting us.

Cae'r Aber is situated high above the Teifi estuary, which is making its way to the sea at nearby Poppit Sands, a five minute drive west. 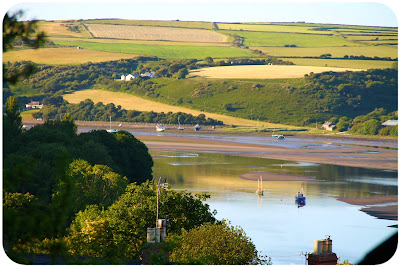 The view from Cae'r Aber's bedroom under the eaves is glorious, and one which we never tire of.

After driving up a seriously steep lane, at the end of which is a space to park your car, you've got to be in pretty good shape to reach the cottage itself. 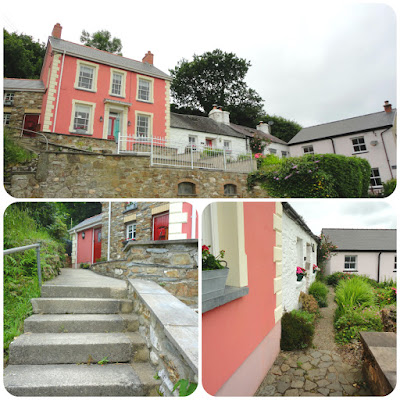 Our cottage is the second white one at the end, partly hidden behind the pinkish house. 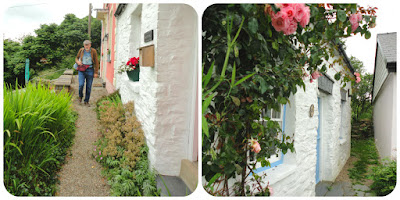 After several flights of steps, there's a crazy paving path which eventually becomes a gravel path, until finally the cottage with its blue painted door and windows, is reached.

Now, back to our holiday proper.

I wish I could tell you the weather gods were with us this time, but no, unfortunately they were not, which you have probably gathered from my post title, containing the dreaded "R" word! 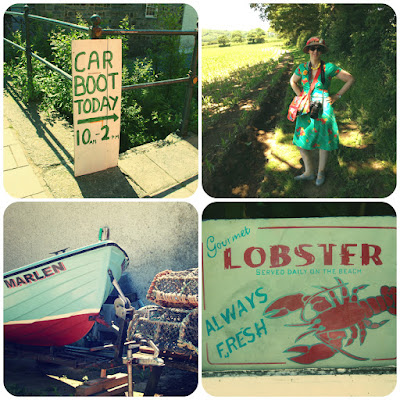 It all started very promisingly, with clear blue skies and lots of sunshine, which we alternately basked in and sought refuse from by finding shady picnic spots or a welcome breeze at the seaside. 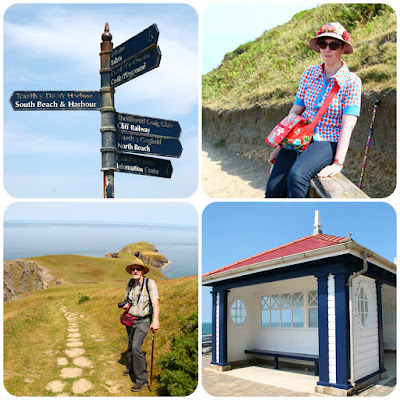 I was able to wear dresses for once, and when out walking I donned my lightest pair of jeans. I even wore the tomato red trousers I've been taking back and forth to Wales, unworn, for many years. 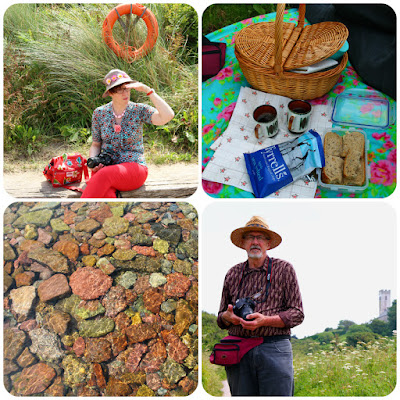 From Sunday to Wednesday, it gradually got hotter and hotter, and there was talk of Wednesday, the 21st of June, being the hottest June day since 1976.

Being close to the sea was a blessing, as it meant we were spared the worst of the stifling heat of only a couple of miles inland. 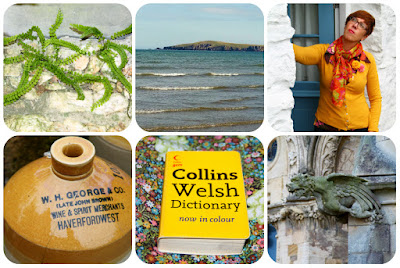 We couldn't believe our luck, but alas, it wasn't to last.

On Thursday, the first of the rain arrived. Timidly at first, with some light and patchy showers, which we often managed to dodge, even if the sun hardly made another appearance over the weekend, and temperatures had dropped considerably. 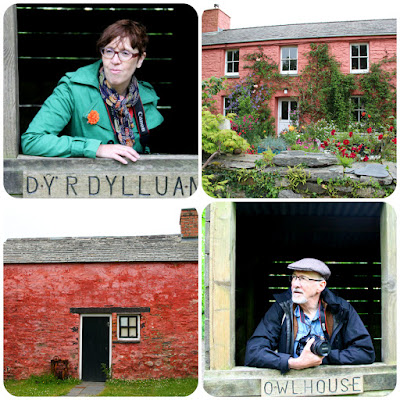 We were in luck again on Monday, when we escaped to the coast and finally made it to St. Davids Head. 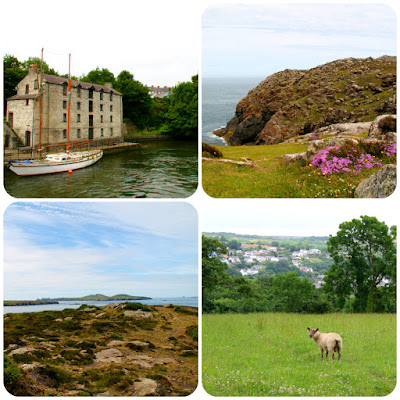 It was clear and sunny all day, but we could see dark clouds, heavy with rain, lying in wait away from the coast.

It was the last day our cameras and us saw any action to speak of. 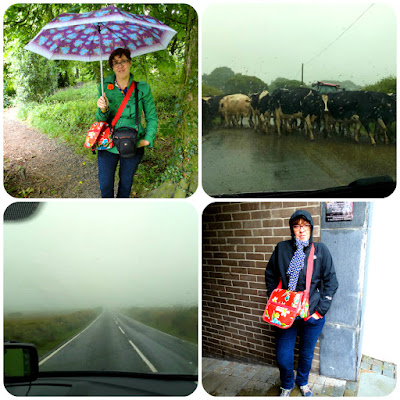 Summer accessories were shelved and out came umbrellas and the Goretex raincoats.

Driving back home one miserable day, we were held up by a herd of cows (top right), and whilst driving through the moorland of the Preseli Mountains, the usual breathtaking views were replaced by zero visibility (bottom left). 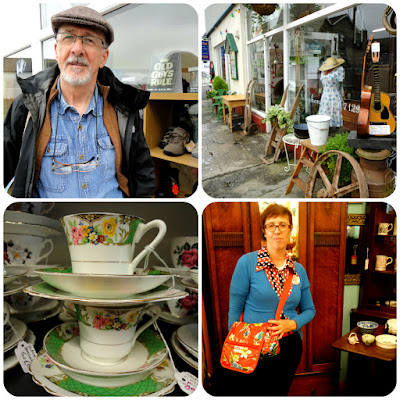 Ominous grey skies and increasingly heavy rain were the only items on the menu from Tuesday onwards.

With most outdoor options off the cards, we trawled the area's charity shops, in search of treasure. 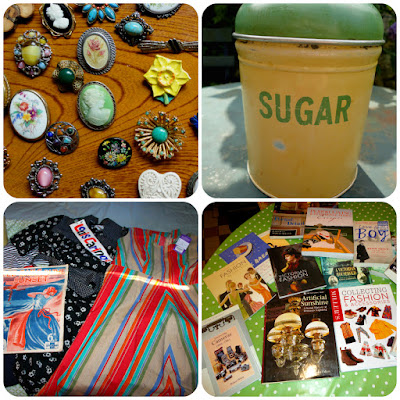 An unprecedented amount of brooches came home with us, as did, clockwise from top right: a Worcester Ware sugar canister, a mountain of books, and a couple of vintage dresses. 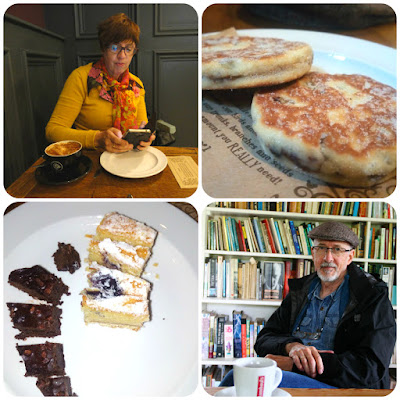 The cold weather - temperatures had dropped to barely more than 10° Celsius - prompted many a coffee break, including Welsh and other cakes, to warm us up, while making the most of free wifi to catch up on some blog reading.

I will be back with more details of our Welsh adventures, but for now I am leaving you with the view from our bedroom window taken on our last day. 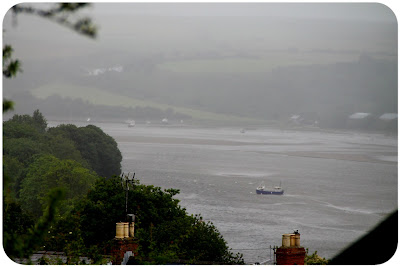 It is the same view as at the beginning of this post, but what a difference!


Posted by Polyester Princess at 15:58