After the outfit post intermezzo of last Saturday, it's time to crack on with my Wales travelogue, especially as I've just realized I was only 3 days in!

By now, it was Wednesday and the weather gods continued to be nice to us. As it was much too warm for anything else, we decided to go to the beach. 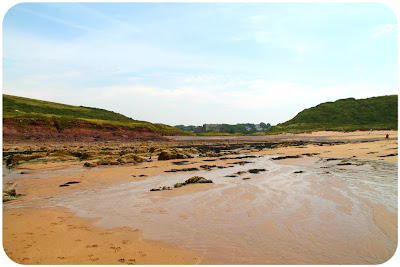 Several beaches were rejected, as we wanted a beach with at least one other attraction nearby, but still a bit off the beaten track. 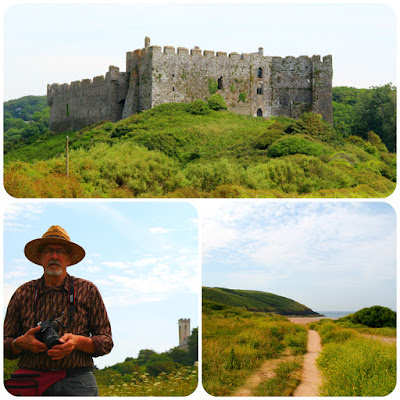 We opted for Manorbier, in the very south of Pembrokeshire about 5 miles from Tenby, which has a picturesque castle overlooking the beach. 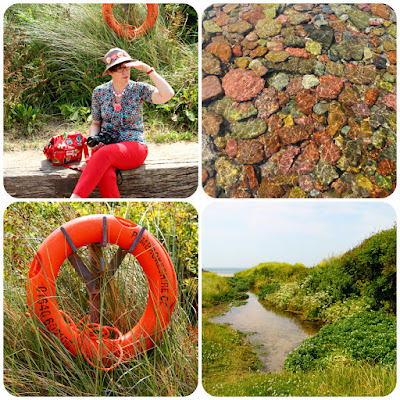 We'd been to both the beach and the castle before, but considered them well worth another visit. 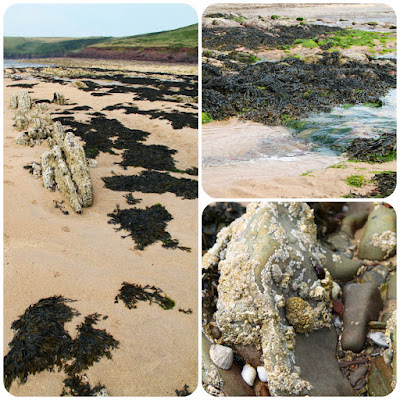 Manorbier's beach, reached by a path through the dunes, is a sandy one, has a stream running down the northern end, and is great for rock pooling. 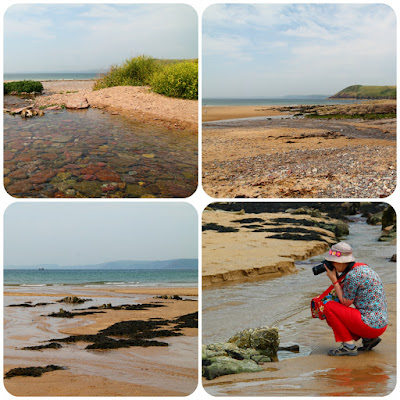 In spite of the glorious weather and the number of cars parked in the National Trust car park, there weren't all that many people about, so that we could explore the beach and rock pools in peace, taking photographs and enjoying the gently caressing sea breeze. 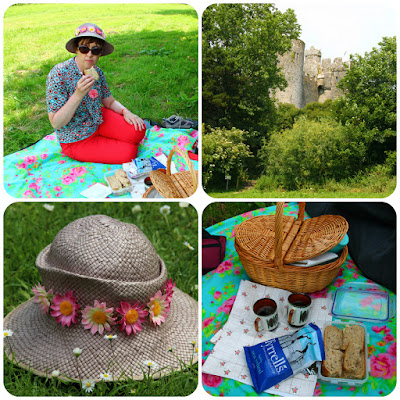 Afterwards, we spread our picnic blanket in a grassy spot beyond the parking area in the castle's shadow. 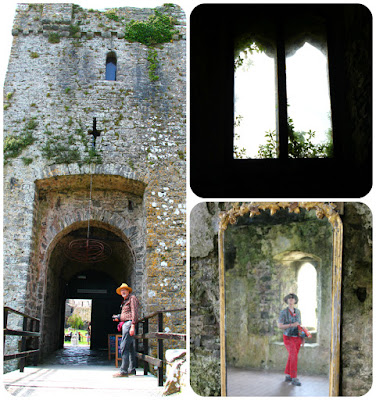 Then, it was up to the castle, which dates from the early 12th century. It is a rectangular enclosure castle with round and square towers. There was no moat as the castle stands on a natural promontory facing the coast. The main gateway to the inner ward is across a bridge and dry moat.

In 1146 Gerald of Wales, the great twelfth century scholar known as Geraldus Cambrensis was born at the castle. 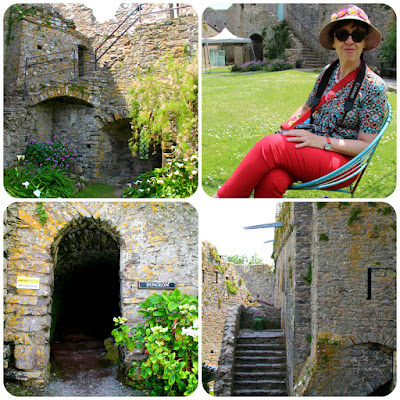 Our last visit to the castle was on a windy day back in 2013, when there was a rather disappointing Vintage Fair taking place.

Now, it seems to be much more commercially exploited, its facilities for weddings very much in evidence. As it is privately owned, and surely in need of funds to keep the place going, who can blame them really? 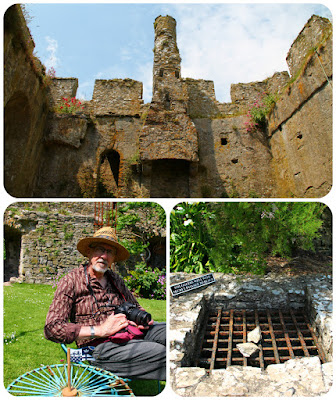 There's a well with a secret passage to the beach (bottom right), which was used by smugglers.

I was wearing my tomato red trousers combined with a lightweight short-sleeved pussy bow top, to which I'd clipped a flower to keep the pesky bow in place, as well as some pale pink beads. 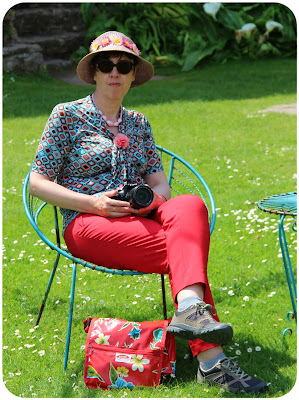 My hat made another appearance, although this time with a different band of flowers. The bag is my faithful over the shoulder waterproof travelling bag from Dutch brand Kitsch Kitchen, which is a holiday staple.

Then came Thursday. If we'd had to believe the weather forecast, the apocalypse was near, as heavy thunderstorms and torrential rain were predicted.

Not in North Pembrokeshire though: we woke up to a grey day with some fine but steady drizzle. 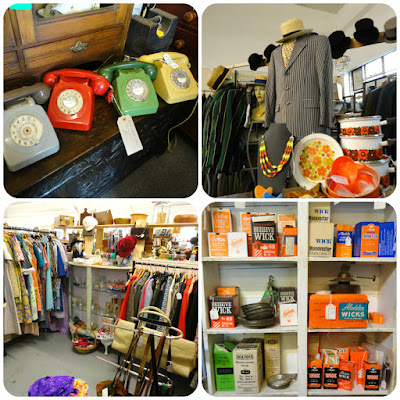 The rain didn't worry us much as it meant we could indulge in one of our favourite wet weather options: a trip to Newcastle Emlyn. About half an hour up the road, there are two antique centres vying for attention.

Our favourite one, New Road Antiques, has a decent selection of vintage clothing, including a corner called The Country Squire, where Jos took the plunge and bought a vintage, Scottish made, Tweed flat cap.

My purchases were a book on collecting vintage fashion, a cute wicker and red leather handbag and some vintage plastic beads. 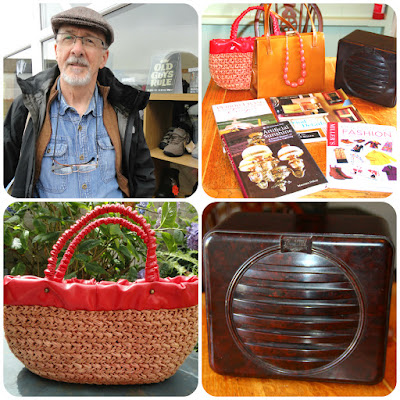 After a car picnic, we called in at the town's one and only charity shop (Animals in Need), tucked away in a back street, where I found another vintage handbag (the light tan one in the photo) as well as several books.

The rain had eased off in the meantime so we decided to visit a little known gem hidden away just outside the village of Boncath: the Cilwendeg Shell House, which is only open on Thursdays between April and August. 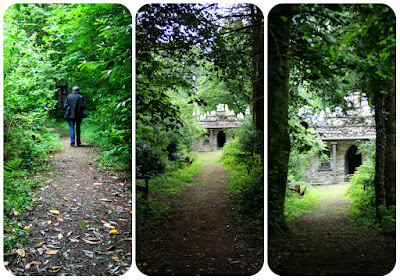 The Cilwendeg Shell House is an ornamental grotto, a folly if you like, built in the late 1820s by Morgan Jones the Younger, who inherited the Cilwendeg estate upon the death of his uncle and created the Shell House in his uncle’s honour.

It is on private land, part of an estate farm, and not signposted at all, so we nearly missed the turning. 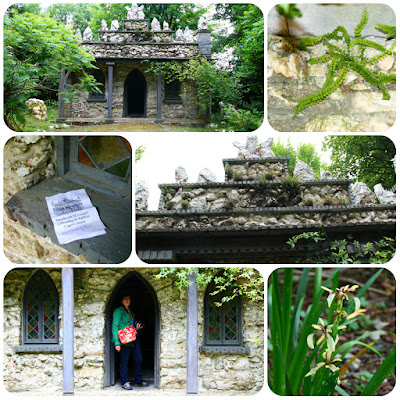 After parking our car, the folly was approached along an atmospheric woodland walk, where it could be seen shimmering in the distance. 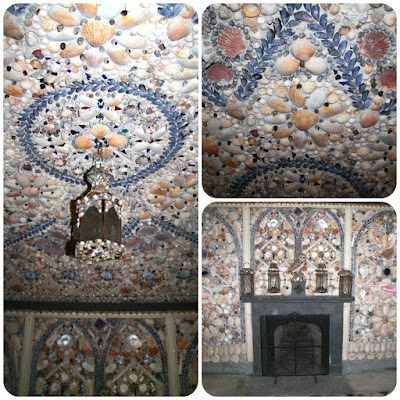 Through the open door, with a barrier keeping you from entering, the fascinating interior can be admired.

Look at those lavishly decorated walls and ceiling, made up entirely of shells and sparkling minerals! 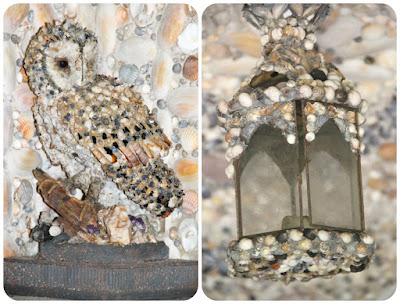 The Shell House, which was created by an unknown architect, was used as a garden retreat for the Jones family, and the fireplace meant that it could also be used in winter.

Wouldn't it be a perfect hideaway for whiling away a rainy afternoon, reading a gothic novel, with a fire gently crackling in the hearth, and all the lanterns lit?

Posted by Polyester Princess at 19:12