Last Sunday the tables were turned for once as we had our first proper stint at selling at a flea market.

The market itself, which is being held yearly in our village, has been going from strength to strength, until last year it reached our front door, with the people trading at the stall in front of our house parking their car so close to it that we were almost unable to get out.

We'd vowed to take that pitch this year, and we did! 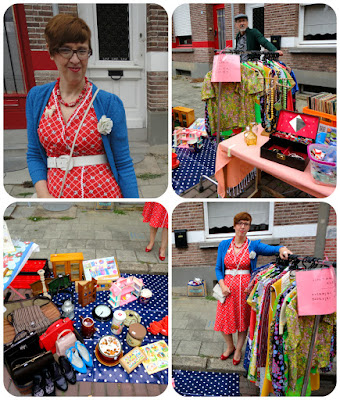 The perfect opportunity to sell off some of the surplus stuff cluttering up our basement, including some vintage items, a boxful of vinyl offloaded to us by our ex neighbour, and the toys Jos's grandchildren have long ago outgrown.

I also put together a rack of vintage and retro clothing, which I'd outgrown, some of it quite literally.

There was also a suitcase full of shoes and handbags and a display of no-longer-loved jewellery. 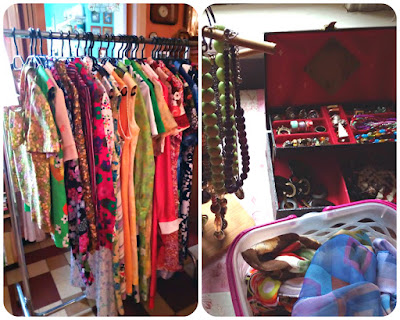 We got up at the crack of dawn, as sellers started arriving and putting up their stalls, early buyers on bikes maneuvering between the half-finished displays.

Although people were clearly drawn to my colourful display of frocks and blouses, I didn't make a sale until a Dutch lady came along and bought about a third of my stock, as well as all of my handbags!

She later returned and bought more stuff after I'd replaced the empty hangers with new items. 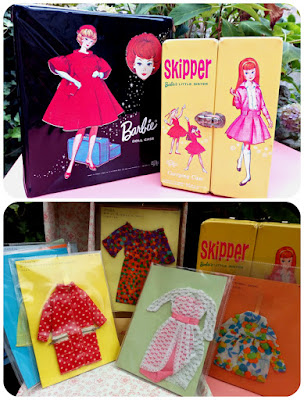 To fill up the empty gaps, I'd put out some vintage Barbie clothing, doubles that I had accumulated during my collecting years. To my surprise, these got some interest and I sold a few pieces, the last customer later returning for an item she'd regretted not buying. I left her talking to Jos, while I got out the rest of my doubles, which she happily browsed through, making another couple of purchases. 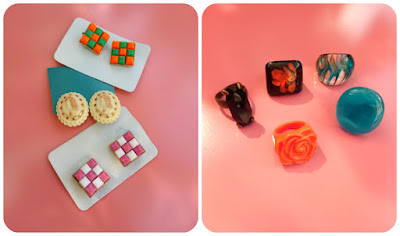 Of course, I made some forays myself, leaving Jos to hold the fort (and selling off some of my clothing in the meantime). I didn't go wild, especially as I had less time than usual to look at things properly, but I still picked up several pieces of jewellery: some rings and clip-on earrings, a couple of brooches and a necklace. 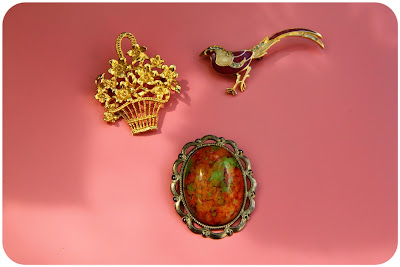 I spotted this exquisite micro-mosaic crucifix and held my breath while asking for the price. Needless to say, I wasted no time when I was told it cost € 2. I've seen similar ones selling for at least € 30 on Etsy! 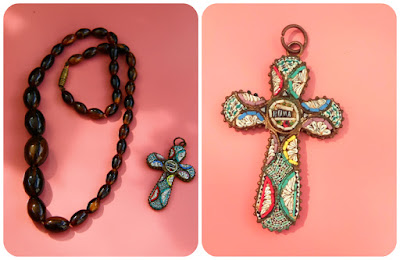 My final purchase was this gorgeous pair of vintage shoes, which I can't wait to wear in autumn. 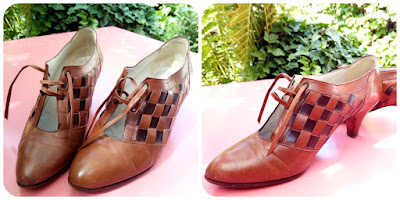 All in all, we sold well and, more importantly, we had a great day. We'll definitely do it again next year. 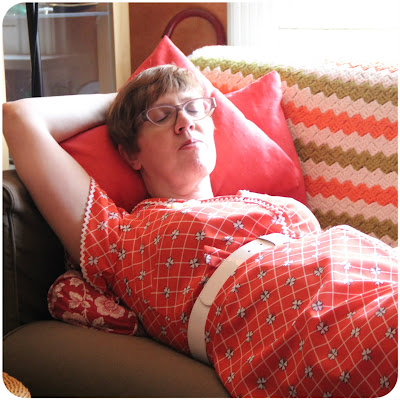 I was completely knackered and kept nodding off in the evening.

But not before letting you have a proper look at the dress I was wearing.

It's a vintage wrap dress trimmed with rick-rack and with the most wonderful butterfly sleeves, which I picked up at a charity shop event back in March. The brooch, a huge white poodle, is modern, but isn't he lovely? 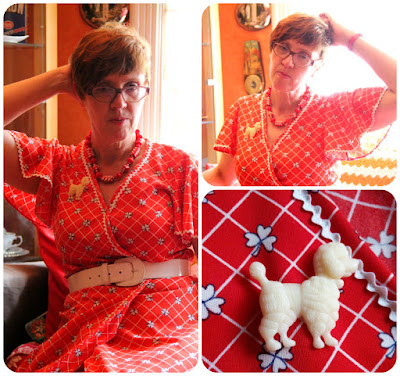 I'd taken the next day, Monday, off to put away the unsold stuff and have a rest. It was a fine and sunny day, so we retreated to the garden with a drink and a bowl of cherries.

Did any of you do the earring thing with the doubles when you were little? I can never resist doing it, even if there were no doubles to play around with here ... 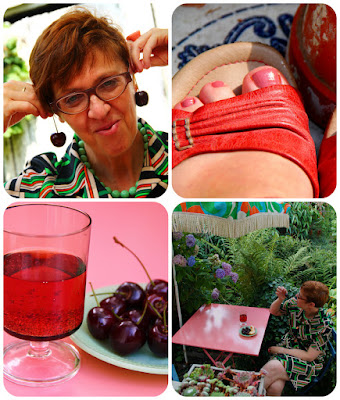 And yes, we have a new garden table, which is a bit bigger than our old round one. We had to go out and buy it on the Saturday, as the table we'd originally planned to use for the flea market was found to be in a bad state.

I even had another stint at painting my toe nails. I nipped into Kruidvat (the Superdrug of the Low Countries) when I went into town, and found these handy pens. They have a felt tip instead of a brush, which seems to be working for me.  I picked them up in all available colours!  It's a pity there's no green though ... 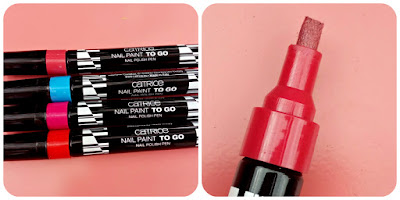 I could definitely get used to a three day weekend ...

Back to work on Tuesday it was, and yes, back to the high twenties too!

I was adamant to wear this funky top, which I'd bought at Think Twice quite a while ago, but had forgotten all about. The green skirt, bought in the sales a couple of years ago, went perfect with it. In order to keep the high collar of the blouse away from my neck, I added a scarf clip which used to belong to Great Aunt Josephine. 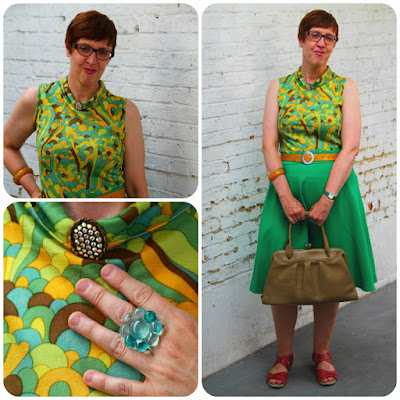 The sandals were given to me last Sunday by my friend Ann. She's the one who gave me all those shoes back in June. They are, if possible, even more comfortable than the jelly shoes!

On Wednesday, temperatures of 30°C were predicted, so I opted for a cotton sleeveless dress.

Yes, I finally got around to wearing the colourful stripy dress I bought in Cardigan. It's looking a bit crumpled here after a day in the office ... 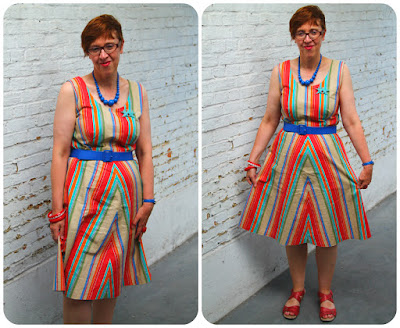 With all the colours, it was easy to accessorize. I added a belt, beads and watch in bright blue, a chunky red ring, red and white bangles and a Turquoise plastic brooch, incidentally also bought in Cardigan, albeit a couple of years ago.

As Think Twice was in the middle of another one of their famous sales, with everything down to € 5, I needed to get out there.

This is what I found: 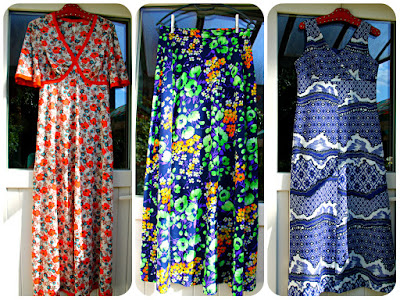 It looks like I was in a maxi mood ..

There was another maxi skirt, but I'll be wearing that in one of my next posts!

Posted by Polyester Princess at 15:10