While the heatwave continued with warnings of thunderstorms to come, we kept seeking refreshment at the seaside.

On Tuesday, our journey took us 40 miles north to Aberystwyth, which is Ceredigion's biggest town, on what would be our first visit to the town when it wasn't raining.

The popular seaside resort, to which tourists have been flocking since the late 18th century, is locally known as "Aber" and doubles as a cosmopolitan university town. It also has a large Welsh-speaking population. 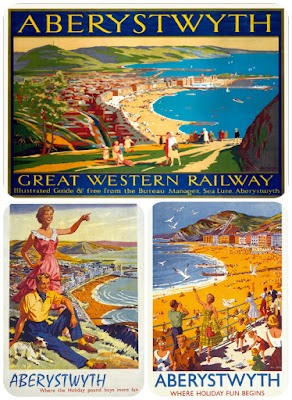 As parking can be a nightmare, we opted for Park and Ride ... only to find that the service had been suspended: Park and Walk, it was to be then! 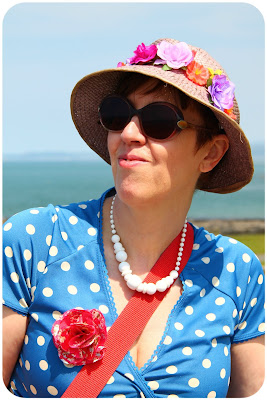 I was wearing my blue polka dot King Louie dress, which I accessorized with a red belt, a red flower corsage and white beads. Oh, and my hat, customized with a flowery hair band.

Instead of heading straight for the busy main part of the Promenade, we walked south to the Castle Grounds overlooking the harbour and South beach, where we found a bench in the shade to eat the picnic we'd brought. Aren't we terrible cheapskates? 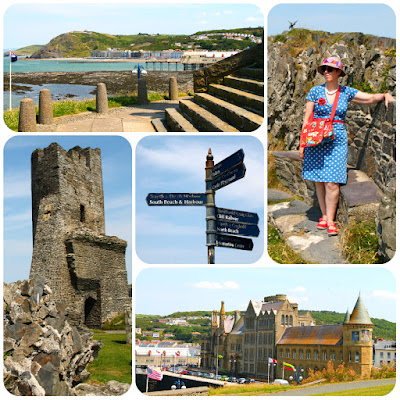 Along the way, we passed and went into several charity shops, but it wasn't the weather for shopping, and the air inside most of the shops was stifling.

I did buy some comfortable looking red shoes called "Cloudsteppers" from Clarks, who had a 50% sale, which I changed into while sat on our picnic bench.

Aberystwyth's castle was begun in 1277, but by 1561, the building had fallen into ruin. 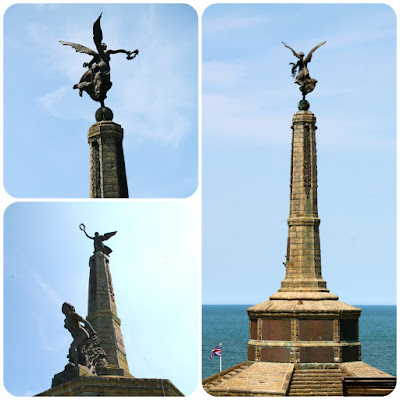 The grounds now include a magnificent war memorial, commissioned from Italy in 1919. 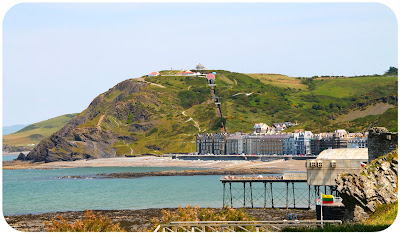 We now had the whole of Aberystwyth's gracefully sweeping northern seafront in front of us.

Savouring the salty sea air, and fortified by a delightfully cool sea breeze, we started walking the promenade's length unhurriedly, reapplying sun cream along the way. 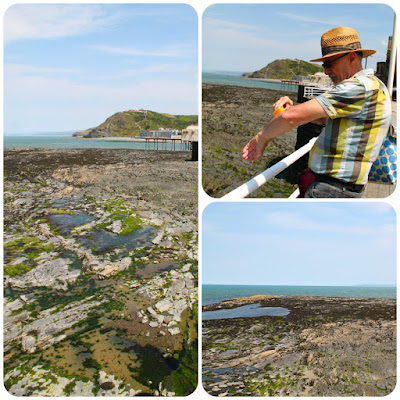 Soon we passed a curved Victorian seafront shelter, with ornately decorated cast iron pillars, which was perfect for some silly poses! 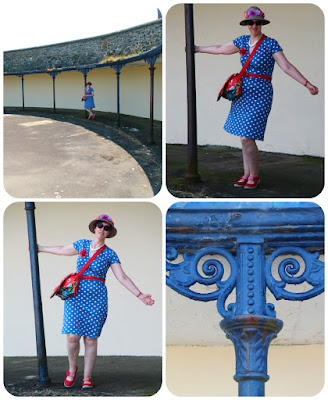 A seafront landmark, the Old College was originally built as a hotel in the 1864, which unfortunately failed after barely one season, after which it was purchased by the founders of the recently established university college. 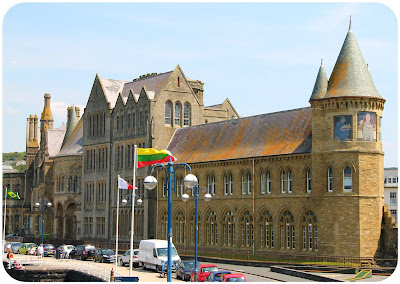 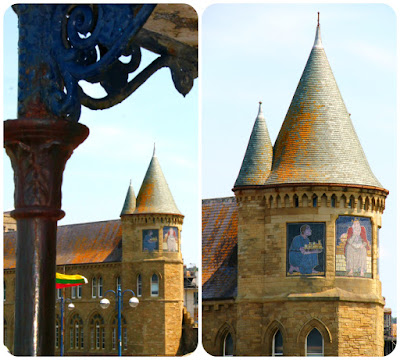 And what a glorious building it is with its conical spires, castellated towers and gargoyles. 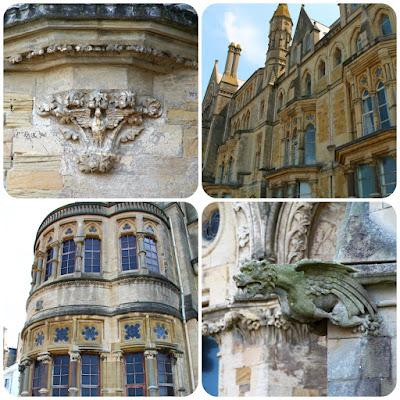 The busiest section of the seafront is Marine Terrace, which is home to the irresistibly tacky Royal Pier. 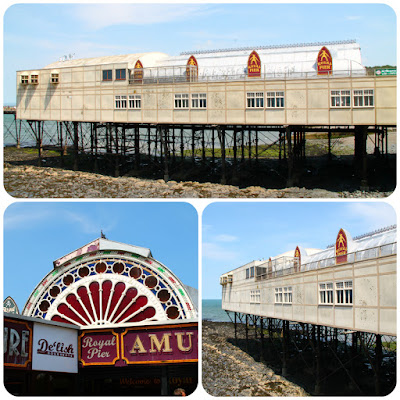 Constructed in 1864, this soon became a popular attraction. Long since reduced from its original 242 metres in length to barely 90, the pier houses the usual bars and nightclubs, an ice cream parlour and, of course, the obiquitous amusement arcade.

A little further on, there's this appealing seafront shelter, which was restored after being heavily damaged by the storms of 2013. The shelter, which featured in no less than three Hinterland episodes, was empty, so I quickly took a snap. Only seconds after clicking the shutter, some people came and sat down in it.

Not far from here, in a street leading off the Promenade, is the building masquerading as Aberystwyth's police station in Hinterland, but it was obscured by scaffolding, so that I couldn't take a proper photo.

The seafront ends at Constitution Hill, which was our destination. While there's a footpath up the hill, there was no way we are going to take it in this heat, especially as there is the famous Aberystwyth Cliff Railway to be experienced. 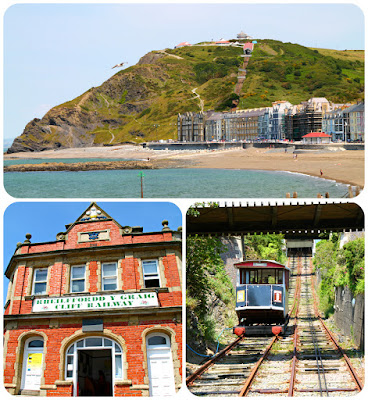 It is the longest funicular electric cliff railway in Britain, and has been transporting visitors to the summit since opening in 1896.

While being hauled up at the slow but steady pace of 4 miles an hour, Aberystwyth's Promenade and its landmarks which we'd passed just moments ago, quickly got smaller and smaller, looking like a Lilliput version of itself. 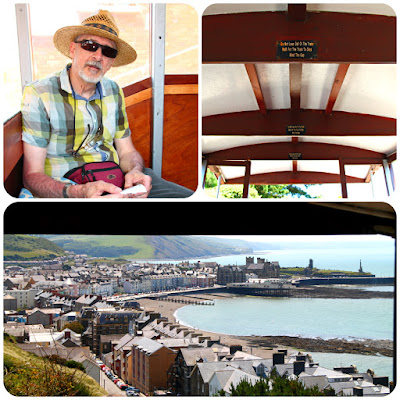 Reaching the summit reveals an amazing panorama which on a clear day extends as far as the Preseli Hills in Pembrokeshire to the south, while the whole expanse of Cardigan Bay opens out to the west and to the north the mountains of Snowdonia can also be seen. 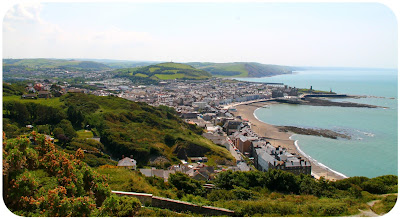 There is a cafe at the summit, originally called Y Consti, which also features in an episode of Hinterland, as well as the famous Camera Obscura, a recreation of the Victorian original. We have yet to visit it, as on our first visit, in May 2012, it was closed, while now it turned out to be out of order!

Back on ground level, we retraced our steps to Marine Terrace where, inside the old Coliseum Theatre adjacent to the Tourist Information Office, is one of the most interesting local museums we've ever had the pleasure to visit. 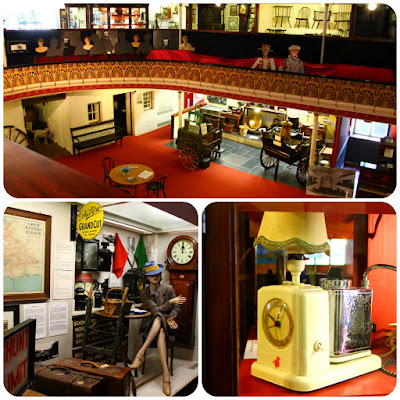 The Ceredigion Museum showcases the history of Aberystwyth and the county of Ceredigion, and the displays chronicle life in the county from prehistoric times to today. There is a wide variety of objects on show, many of which were donated by the public, covering all sorts of topics including home and work life, agriculture and seafaring.

We spent a happy few hours there back in 2012, on a miserable rainy day and, although it is now under refurbishment, we couldn't resist popping in. I was quite taken with an example of the predecessor of our Goblin Teasmade! 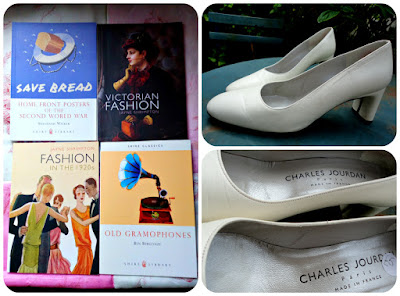 After browsing the small but well stocked museum shop, we came away with several books, while in a small pop up charity shop a couple of doors away, I snapped up these vintage Charles Jourdan shoes for £ 5. Although they're my size, I'm not sure I'll ever wear them, but they were too good to resist.

Then it was back to our car and our cottage to wind down from yet another day well spent and make plans for the next one.