Memories are made of this

Welcome to the last stretch of our Welsh holiday!

By now, it was the Monday of the second week, and as the sun was shining for a change, we decided to visit the National Trust owned Stackpole Estate in South Pembrokeshire. This beautiful estate comprises 12 square kilometres of farmland, woodland, lakes, beaches, and cliffs.

The freshwater lakes, known as the Lily Ponds, or the Bosherston Lakes, are man-made and were created over 150 years ago by the damming of three narrow valleys by the earls of Cawdor, then owners of the Stackpole Estate. 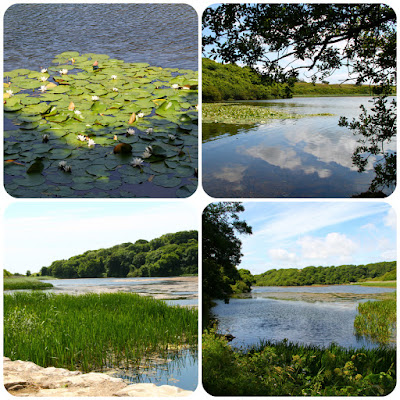 Stackpole Court itself is no longer there, having been demolished in 1963 to avoid having to pay taxes on the empty building, leaving behind only the estate's outbuildings, parkland and beaches.

From the car park at Bosherston, there is a lovely walk around (and over) the lakes, which in June are carpeted by water lilies. Within minutes, we were joined by the local wildlife, including a cheeky little robin and a heron treating the lakes as a fast-food restaurant. Oh, and there's me as well ... 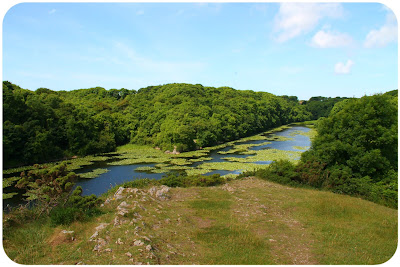 A little diversion and an uphill scramble were rewarded by a bird's-eye view of the lakes.

After about 30 minutes the landscape changed dramatically as we were getting closer to the sea and eventually the beach at Broadhaven South came into view. 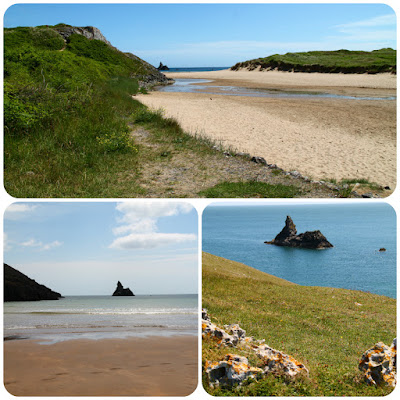 The rock which beckons tantalizingly in the distance is Pinnacle Rock, also known, for obvious reasons, as Church Rock. Just as I was about to take a picture, a heavyset couple dressed in hideous beachwear plonked themselves right in the middle of my frame.

After our picnic, we joined the coast path climbing away from the beach for a closer look at Church Rock.

Next day was a bit of a letdown, as it started raining as soon as we had reached our destination, the Georgian seaside town of Aberaeron in Cardiganshire. 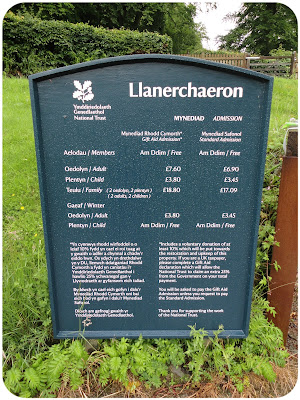 After a car picnic without a view (unless our windscreen wipers were going at full speed), we drove to the nearby National Trust property of Llanerchaeron, a 18th century Welsh gentry estate which has survived virtually unaltered.

Unfortunately, I couldn't take a proper photograph of the outside, as it was covered in scaffolding. 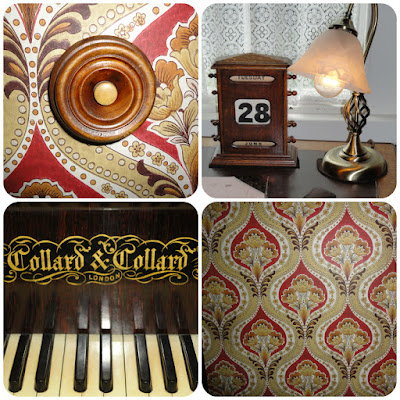 Exploring the house, servant's quarters and stables kept us occupied (and dry!) for a couple of hours. 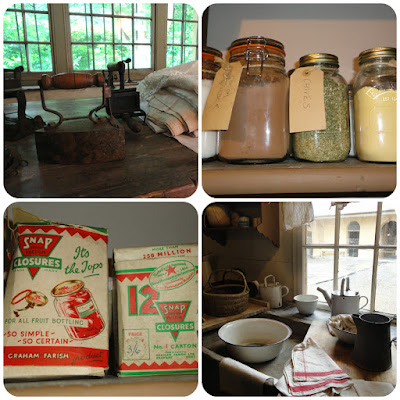 By then the sun had come out and we were able to pay a short visit to the farm buildings and walled garden.

On Wednesday the weather was truly horrendous, too wet even to properly enjoy some retail therapy in the pleasant town of Carmarthen. Needless to say, no photographs were taken.

Thursday proved a little better (it could hardly be worse, couldn't it), but the weather was still very unstable. 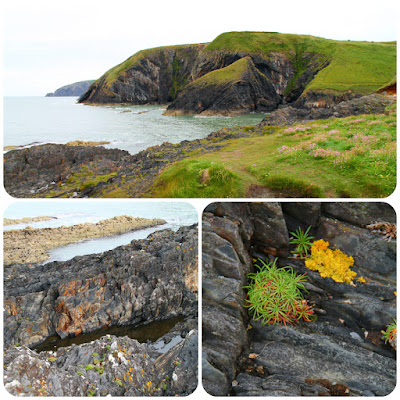 We opted for a short coast path walk starting from nearby Ceibwr Bay, in West Pembrokeshire, also National Trust owned. 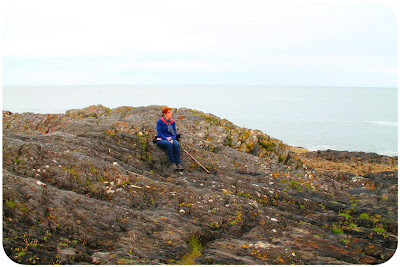 Ceibwr Bay is a tiny inlet of rocks surrounded by tall cliffs and it's a really wild and remote place, with amazing folds in the rock strata in the cliffs. 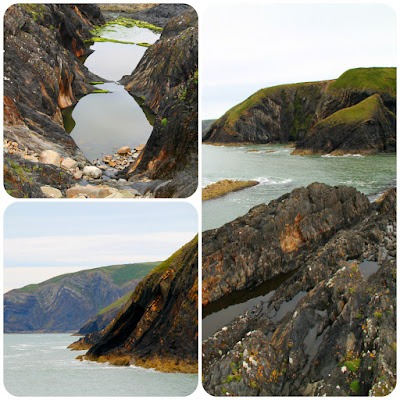 One mile to the south is The Witches Cauldron, which we decided to walk to.
Pwll-y-Wrach or The Witches Cauldron is a large collapsed cave forming a hole in the clifftop, where in rough weather the sea comes surging into, thereby giving it its name. When we were there a couple of years ago, the weather was mild and there was only a tranquil pool of water in the cauldron. Now, in spite of the weather, it was virtually empty. 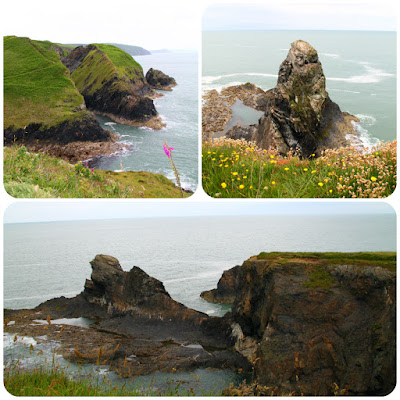 It had started drizzling by then, so we walked back in a hurry, but by the time we were back at Ceibwr Bay it was dry again, just in time for our picnic with a view. 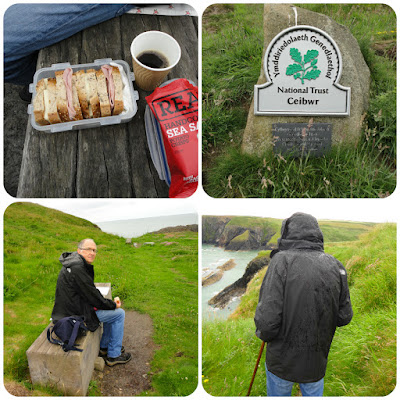 Friday was our last day and we were starting to feel quite melancholic. The ultimate picnic with a view was called for and we drove to a famous viewpoint overlooking Poppit Sands at Gwbert. Although we were only the second car arriving at the car park, we certainly weren't the last. It was clearly the place of choice for local people to have lunch in, and with a view like that, who can blame them? 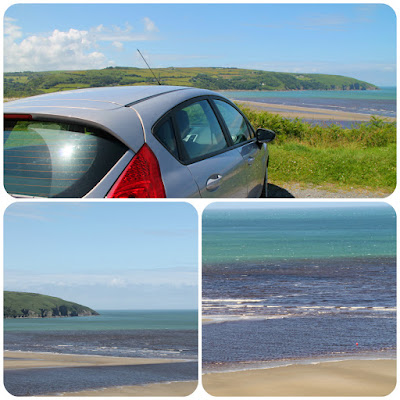 After lunch, we drove to Poppit Sands itself, at the opposite side of the Teifi Estuary, for a final walk along the beach. 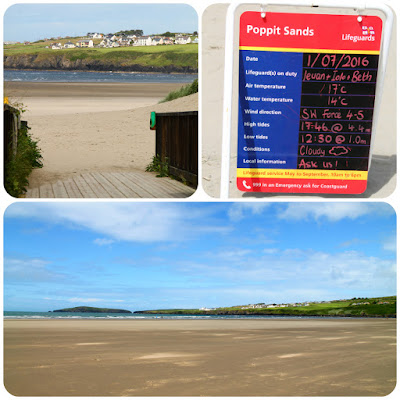 It was quite blustery and with a temperature of only 17°C not what you would expect of a summer day at the end of June. As you can see, the beach was virtually empty and the lifeguards certainly didn't have a very busy day. 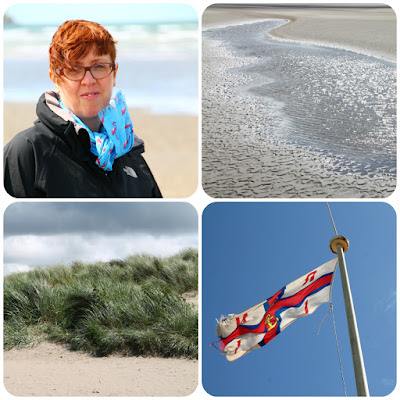 With one more backward glance at the sea, all too soon it was time to pack our bags and say goodbye for another year, leaving behind our footsteps and taking away lots of lovely memories. 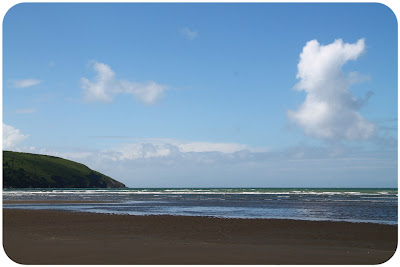