... and you can take that quite literally!

On Saturday, they were measuring out and marking the pitches for Sunday's flea market, to be held in the village streets, in green spray paint! 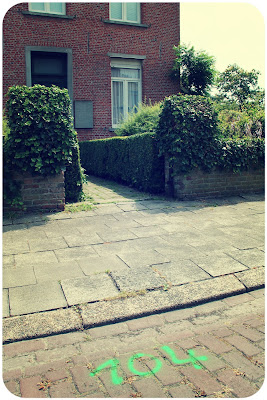 By coincidence, I was wearing green that day: a short-sleeved button-down dress in a stripy fabric featuring different shades of green. While the stripes run vertically on the bodice, the ones on the skirt run diagonally, creating chevrons at the back and front. 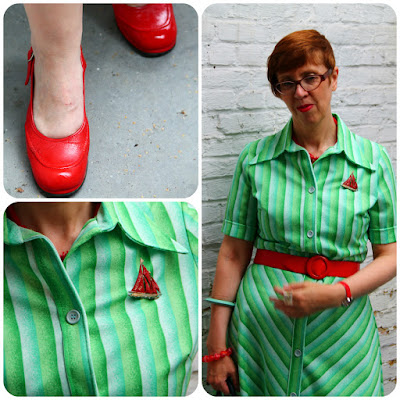 I combined the dress with various red accessories, mainly so that I could wear, and show you, my new red block-heeled vintage shoes. The heels had a few scuff marks, but these were easily removed. Apart from that, the shoes are in almost perfect condition and are quite comfortable too. 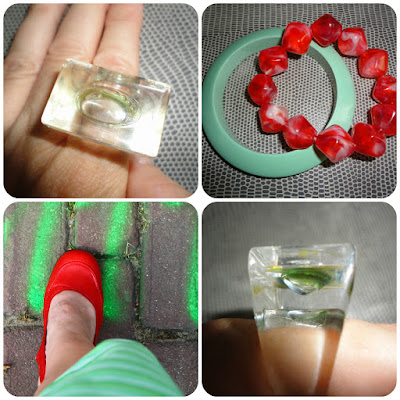 The clear perspex ring, enlosing an air bubble and swirls of green, yellow and blue, was found at a charity shop a couple of months ago. The bangle and bracelet were cheap retail finds. 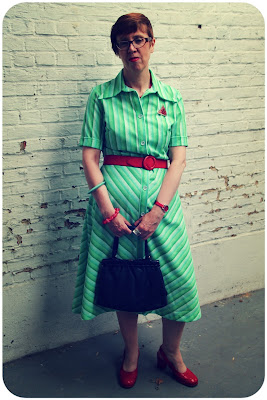 We went charity shopping on Saturday, but that proved to be rather disappointing, so we stopped at the garden centre for some colourful plants to replace the ones that did not survive our holiday.

We got a pot of lemony yellow Surfinias, reddish pink Cosmos with feathery foliage, cheerful yellow Coreopsis and some Echinacea, which were greatly appreciated by the local population of bees. 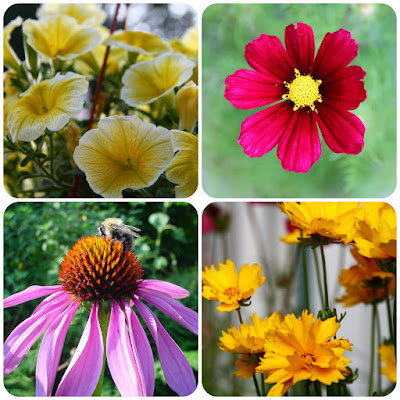 As we needed to make space for the pots, we started cutting away some of the ivy which is running rampant in our garden. While we were doing so, we noticed that the arch, which leads to the area next to our kitchen, was sagging. It was a cheap metal one which we bought many years ago, and it had rusted through in a couple of places.


It was carrying the weight of a tangled mess of  Clematis montana which had unfortunately died on us a year or two ago and was now being colonized by the ivy. There was nothing for it but to demolish the whole thing and it is unbelievable how much lighter that part of our garden is with the arch out of the way. 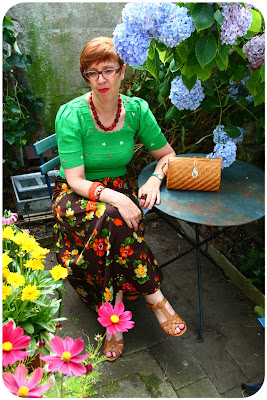 Sunday was the day of the flea market, which was being held in our street as well as the surrounding ones. The people who had the pitch in front of our house had parked their car on the pavement in such a way that we had problems getting out of our front door. We'll make sure to have our own pitch there next year!


I was again wearing  green: a knitted top with slightly puffy short sleeves and embroidered flowers in white and pink, which I combined with a brown flowery maxi skirt I bought for € 1 at Think Twice last week.

My accessories included a bracelet featuring an array of Saints, an orange textured plastic bangle, some amber beads and a vintage rattan handbag with a metal clasp and rattan cross-body strap. 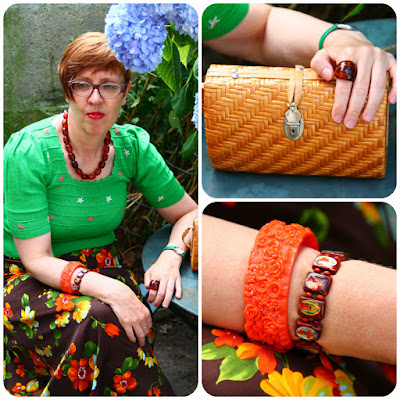 The day started out cloudy but it was very humid, with occasional bursts of sunshine. At one point it was looking like rain, but fortunately the weather gods were lenient this time.

Jos's youngest daughter, who inherited the "thrifting" gene from her dad came all the way from her hometown, 14 kilometers away, on her e-bike, and my friend Princess Inez arrived on her bike as well.

Look at Princess Inez's cute white summer gloves, which she was inspired to wear by Jessica, whose blog she is an avid reader of. 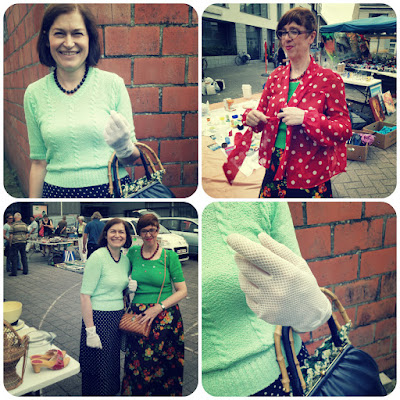 I made my first buys within minutes: two fans for € 0,50 each, one of them a black lacy Spanish beauty. 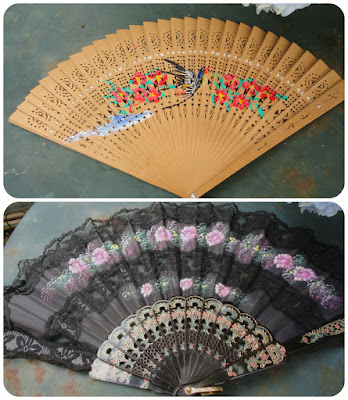 My next find was a new-to-me red and white polka dot blouse with pussy bow, which you can see me trying on in one of the above collages. 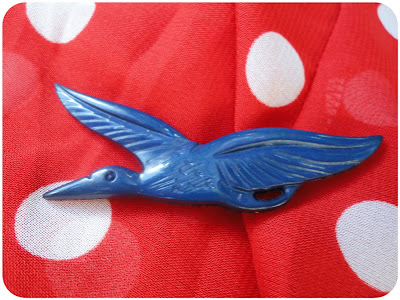 I actually got the dark blue plastic bird brooch for free!

My other finds were: 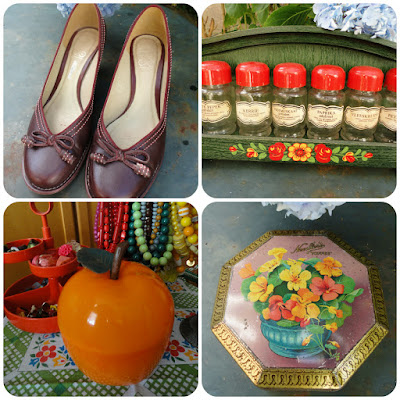 - A rack for storing pots of herbs, from the 1970s Emsa range we are collecting, complete with original pots

- A cute toffee tin with some cheerful Nasturtiums on the lid

- An orange "apple" ice bucket, which of course I will not be using for ice-cubes, as that would be far too obvious! No, I will use it to store some of my ever-expanding collection of jewellery
. 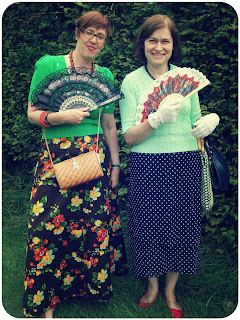 After a lazy lunch back at ours, we did a final round of the market. The sun had come out in the meantime and it was getting to be quite hot.

Look at us ladies of a certain age, fanning away to keep the hot flushes at bay ...

Since the hot weather has decided to stay with us for a couple more days, I have already made good use of that fan - my personal portable air conditioning - although I must say I've been getting some strange look on the bus.

In my next post, I will be giving you the final installment of our wet Welsh holiday, before it slowly recedes into the mists of time.
Posted by Polyester Princess at 19:33