Walking back to happiness

Being back at work since Tuesday, our holiday is slowly receding into a distant memory.
Fortunately there are the many photographs we took to remind us that, in spite of the less than perfect weather, we did have a great and relaxing holiday, and that we made the most of the dry and - heaven forbid - sunny moments whenever they presented themselves. 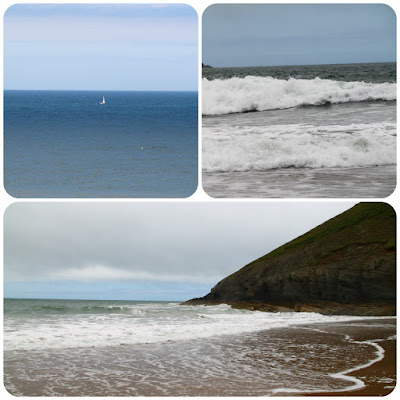 As we were surrounded by beautiful coastal scenery, we tried to be at the seaside as much as we could.

On the Monday of the first week, after the initial rain had subsided, we drove the 20 minutes or so to the secluded beach at Mwnt. Driving along ever smaller country lanes banked by hedges hiding the view as well as what's around the next corner, it feels as if you are nearing the end of the world and will end up driving straight into the sea. 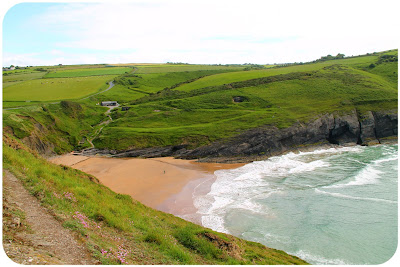 Finally arriving at this National Trust beauty spot, the only buildings in sight are the little whitewashed 14th century Church of the Holy Cross and, at the far end, above the steps descending to the beach, the small tea kiosk selling the most delectable homemade welshcakes! 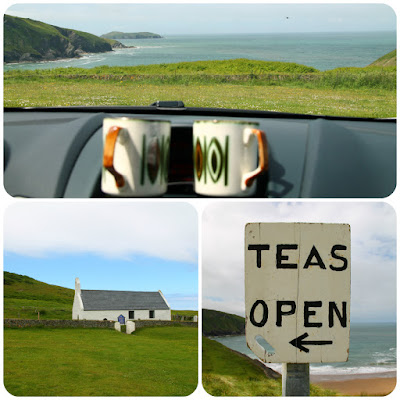 We set ourselves the challenge of finding picnic spots with a view, even if it was just from the car, and I think we definitely succeeded with this one, the first picnic of our holiday. 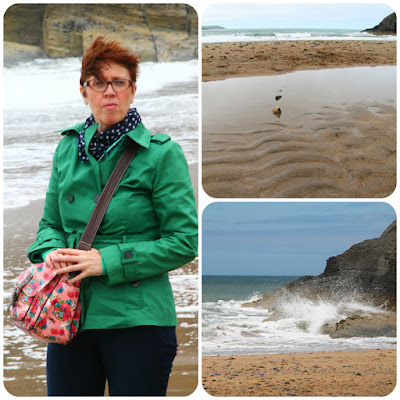 A walk along the beach accompanied by the sound of the waves crashing onto the rocks was exactly what we needed to blow the cobwebs away.

Tuesday was cloudy but mainly dry, so we set off for our first proper walk. The  Marine Walk, a well laid out and picturesque path, starts at Goodwick, from where ferries depart for Rosslare in Ireland.

At the walk's start, there are some beautiful mosaics depicting the town's as well as its neighbour Fishguard's history. 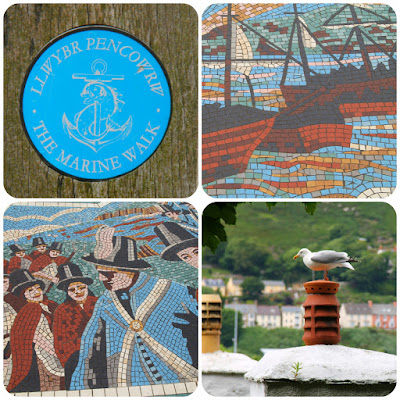 One of the mosaics depicts the French invasion of Fishguard, which took place  in 1797, the so-called Last Invasion, which was defeated by locals. There are stories of the brave resistance of Jemima Nicholas, also known as "Jemima Fawr" (Jemima the Great), single-handedly capturing twelve of the invading soldiers. 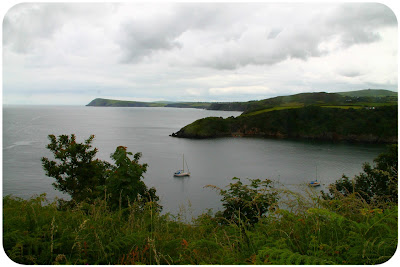 As soon as the path started climbing, we were rewarded by spectacular views across the bay to Dinas Head, the dark brooding headland you can see in the distance. 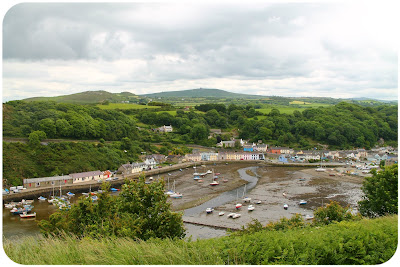 Soon Lower Fishguard came into view. The harbour is famous for being the location of the 1971 film adaptation of Under Milk Wood, starring Richard Burton and Elisabeth Taylor. Earlier, in 1955, Moby Dick, starring Gregory Peck, was also filmed here. 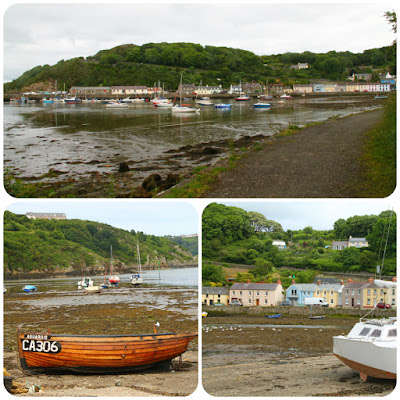 A path zig-zagged down to Lower Fishguard itself, where not only did we find a perfect bench with a view for our picnic, the sun also decided to make a shy appearance. 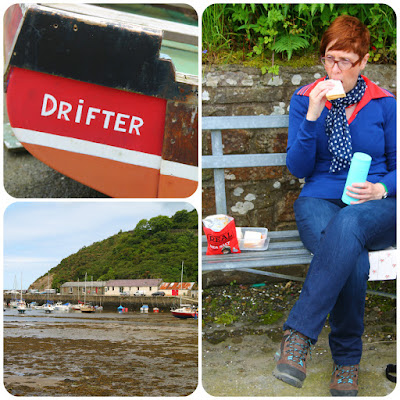 After arriving back at Goodwick, we walked along the East Breakwater, where we watched a gull catching its evening meal: a rather large and forbidding-looking crab! 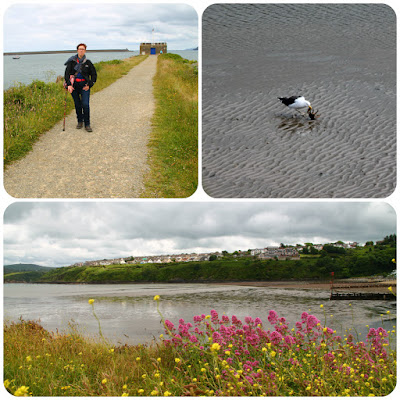 By this time, we were getting optimistic about the weather, so on Wednesday we set off for what should have been a spectacularly scenic drive starting from Tregaron in Ceredigion (Cardiganshire). Sadly, it started raining before we even got there and as it didn't look as if it would let up any time soon, we had a rethink on how to spend the rest of our day. 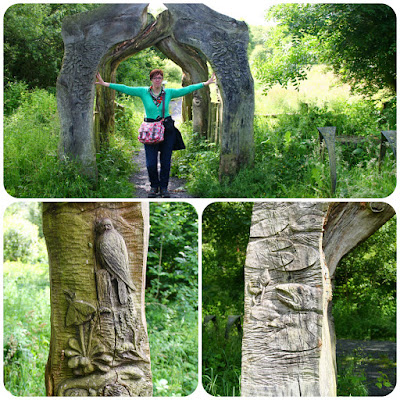 After we had driven all the way to nearby Lampeter, the sun started coming out, so we drove all the way back again to Tregaron for a visit to Cors Caron nature reserve. 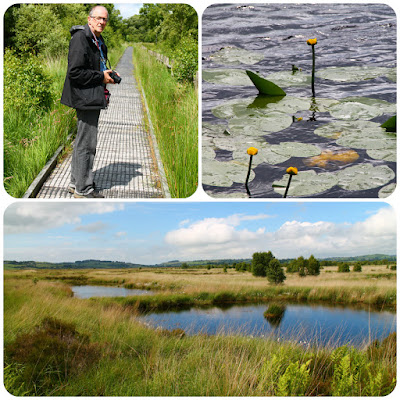 Cors Caron is one of the few remaining examples of a raised peat bog in Britain, bordered by the river Teifi and on the edge of the Cambrian Mountains. 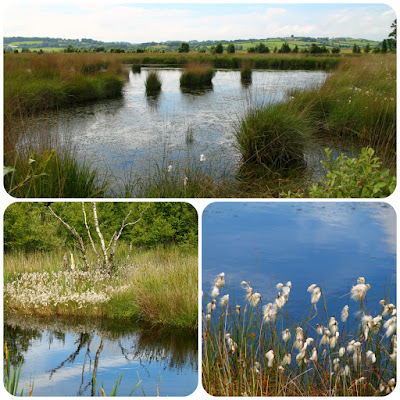 You can walk along a circular boardwalk with spectacular views of the bog. The sun was out for once when we where there, but I can imagine it being very eerie on a dark winter's day. 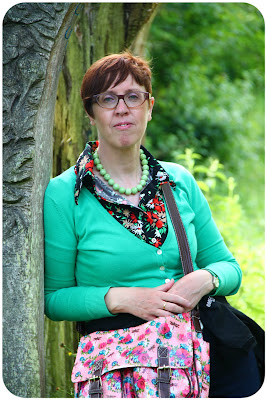 I hope this has whetted your appetite as in my next travel post, I will be visiting a popular seaside town and pay tribute to a well-known Welsh poet.

Have a wonderful weekend!


Posted by Polyester Princess at 18:59