Into each life some rain must fall 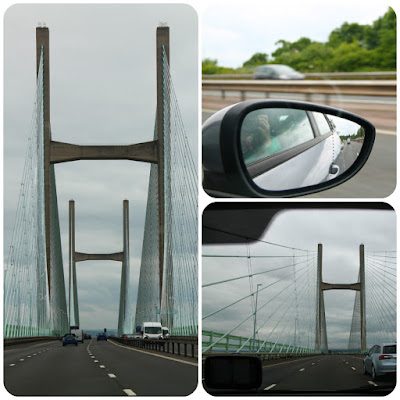 Ok, but not during my measly two weeks’ holiday, right? At least, not too much of it. But then again: Wales, what did I expect? It wouldn’t be as green and lush without rain, and lots of it, would it?

It all started very promising as we arrived in glorious sunshine. Here I am posing with a view of the Teifi Estuary behind me (left) and in front of our little cottage (right). 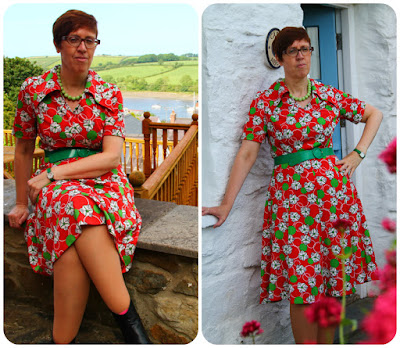 But appearances can be deceptive, and we woke up on Sunday morning all ready to enjoy our very first day, only to be greeted by grey skies, shortly followed by showers, which later developed into, you guessed it: rain!

We had only planned a visit to nearby Cardigan, where not only there was a small car boot sale, some shops, including one charity shop, were open too. It was only raining lightly when we left, so I opted to wear a dress, which wasn't the best of choices. 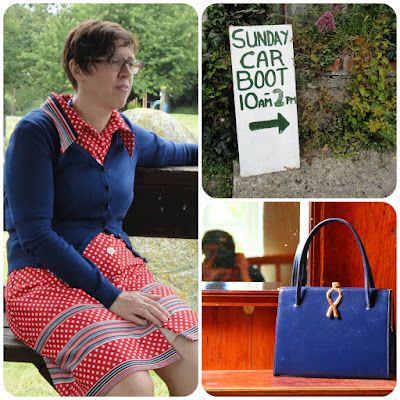 Striking gold at both the car boot, where I bought the first of many brooches, and the chazza, where I found this lovely handbag, did compensate for the dismal weather a bit, though! 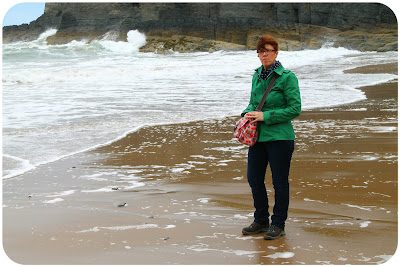 Rain again on Monday, but that soon improved, and we managed to go the beach, albeit wearing quite a few layers.

After a mainly dry Tuesday, rain made another appearance on Wednesday.

In fact, it started pouring down so heavily that, after a car picnic in a nature reserve car park, we abandoned all our plans for the day, and drove to the nearest town, Lampeter, for a spot of shopping. 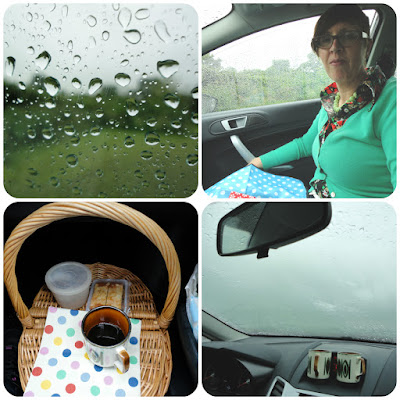 By the time we got there, wouldn’t you know it, the sun had come out.

Thursday was a gorgeously sunny day, which we spent at the seaside, but it was followed by two days of such unstable weather that we ditched any plans we had for longer walks and did something else instead, including more charity shopping and a visit to an antique centre. 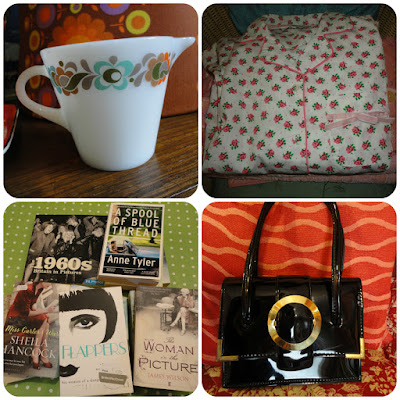 These are just some of our finds. Clockwise from top left: little pyrex jug, new-to-me pyjamas, books and more books and a small vinyl handbag.

At first, Sunday didn’t look too bad, but clouds starting gathering while we were having breakfast. Nevertheless, we had hopes of it staying dry enough for a local walk starting from nearby Poppit Sands. The weather gods must have been laughing as we were putting on our walking shoes in the pouring rain. Surely it would stop raining any minute, so off we went. 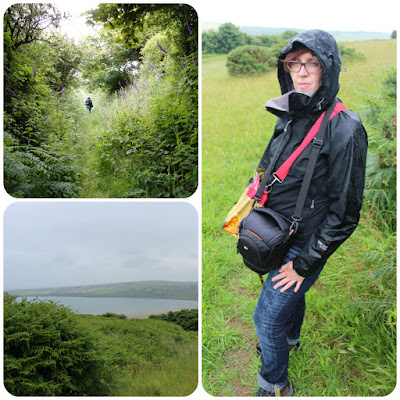 But no: instead it started pelting down with a vengeance. As luck would have it, the walk, which was initially on a small tarmacked lane, soon veered off into an grassy path between banks of greenery. Needless to say, by the time we were back at Poppit Sands we were soaked through and through. 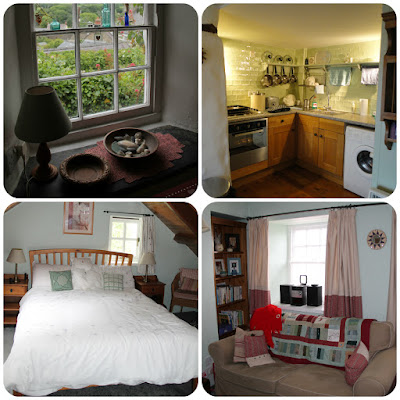 The rest of the day was spent drying our clothes and relaxing in our cosy little cottage.

We got our hopes up on Monday, waking up to some sunshine, which for once stayed with us all day, although it was a bit chilly for the time of year, especially on the coast path.

Not to mention, very windy indeed. Just look at my hair! 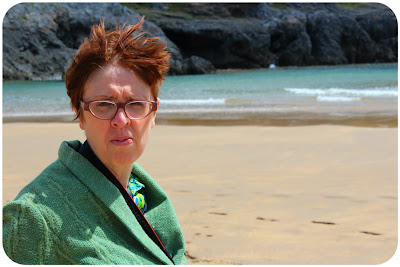 That night, the forecast said rainy and windy for the rest of the week, which was obviously a bit of a letdown and called for yet another change of plans.

On Tuesday, a mere 15 minutes or so after we landed in the colourful seaside town of Aberaeron, our umbrellas had to come out, so we hit the town’s one and only charity shop, British Red Cross, locally called Harrods, which we remembered from last year.

Ever on the lookout for brooches, I was in luck as they had quite a nice selection, and I came away with six, making a sum total of 18 brooches, all found at charity shops and one car boot: 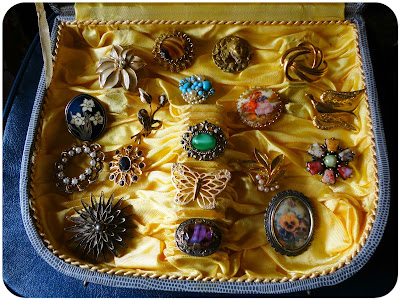 Let’s forgot about Wednesday, shall we? It must have started raining before six in the morning. Sleeping right under the eaves, we could hear it pelting down without any letup. Indeed, it did not stop raining until the late afternoon.

So, instead of showing you yet more rainy photographs, let's crack on and show you some more of our finds instead. 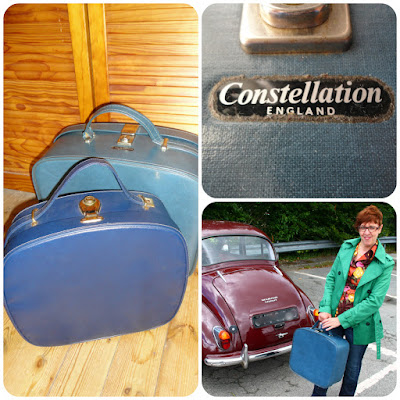 This set of luggage, comprising of a Constellation weekender and a vanity case, were found at two separate locations. Unfortunately, this is not our car I am posing in front, but the one which was conveniently parked next to ours. We also bought another old bottle, which is joining the ever growing collection on our windowsill. This one is from Tenby. 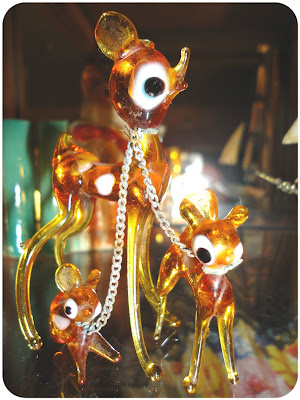 They probably date from the 1950s. We paid only £ 1,99 for them, but they seem to command much higher prices on-line.

Unfortunately, the weather only improved slightly during the last days of our holiday, but at least it stopped raining from time to time, so that we were able to squeeze in some more coast path walking.

All too soon it was time to once more say goodbye to our little cottage with its ever-changing views of the estuary, always inviting me to take one more photograph. 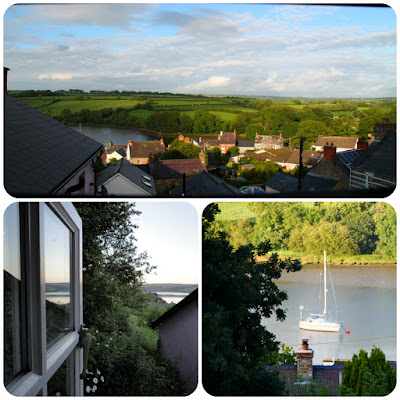 I'm leaving you now with a photograph taken from our car on our hellish return journey, involving queues on the M4 and M25 as well as torrential rain on our final stretch to the Channel Tunnel on the M20. 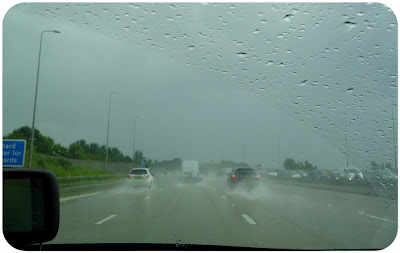 I'm promising a more sunny outlook in my next post, so please stay tuned!

Posted by Polyester Princess at 16:54