Those were the days of roses, poetry and prose

In my last travel post, I left you on a rainy Wednesday with some sun thrown in later in the day.

On Thursday we finally woke to the sun streaming in through our cottage's windows! This obviously called for a day at the seaside and that's exactly what we did: we drove 35 miles south to the lovely seaside town of Tenby. 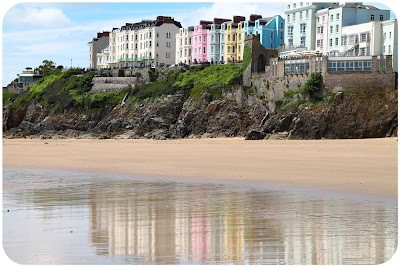 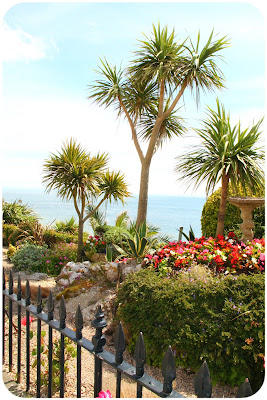 From previous years, we knew exactly where to park, but were not sure how to get there. Nor did the lady who lives in our Sat Nav, whom for some long-forgotten reason we call "Marie-Jeanne". After taking a few wrong turns and ending up exactly where we started, somehow my instinct took over and I effortlessly guided us to the correct street at the end of which was the car park in question. Needless to say, Jos was duly impressed!

The sun continued to shine and I could have worn a dress for the occasion. Unfortunately by then I had lost all trust in the weather, so I wore jeans combined with a vintage top. One particularly naughty seagull did not approve of my choice though, as I was promptly bombarded. Luckily, we were able to remove most of it by using paper hankies and antibacterial hand gel, so that I didn't look like a complete dunce for the rest of the day. 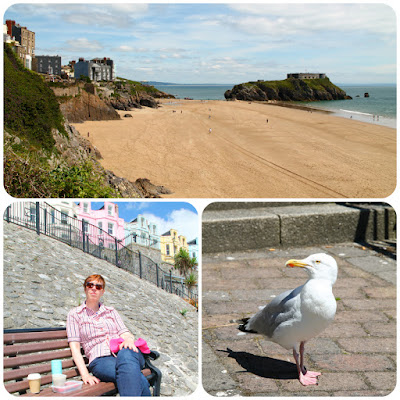 As we were picnicking on a bench tucked away on the steps below Tenby's Esplanade, the gull was probably venting its disappointment at not getting its share of our sandwiches!

In spite of the glorious weather, most of the 2 mile stretch of South Beach was relatively empty, the much smaller Castle Beach being the place of choice for most people, who seem to prefer being packed like sardines onto this rather limited space. 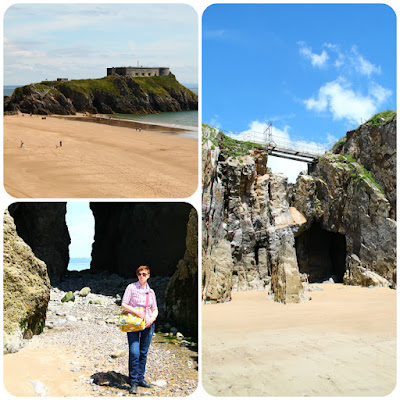 The tide was out, so we were able to walk right up to St. Catherine's Island, which at high tide is completely surrounded by water. I guess that's why it's called an island ...

Since last year, St. Catherine's Island and its Fort can be visited but as I have vertigo, the see-through walkway to the main part of the island was a definite no-no, my legs turning to jelly by even looking at it. 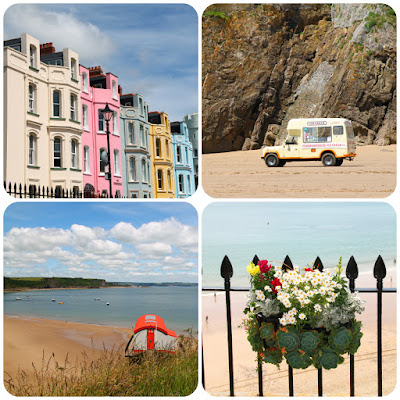 Instead we just wandered around enjoying this colourful seaside town, and popping into every charity shop we came across. 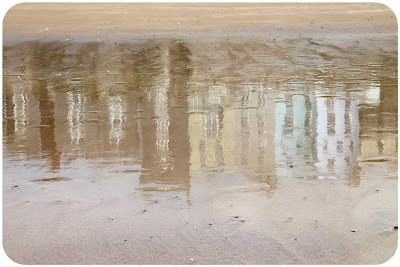 We woke up on Friday morning to the news that the UK had voted Leave and had breakfast while following the developments on TV.  If it all felt a bit strange to us, I wonder what it was like for those UK residents who had confidently voted Remain ...
In the following days, most people we spoke to, upon learning we were from Belgium, actually apologized to us. It certainly was the topic of most of the conversations we overheard that day.

After breakfast we drove south again, this time over the border with Carmarthenshire, to the lovely village of Laugharne, well-known for being the home of Dylan Thomas for the last four, and very creative, years of his life. 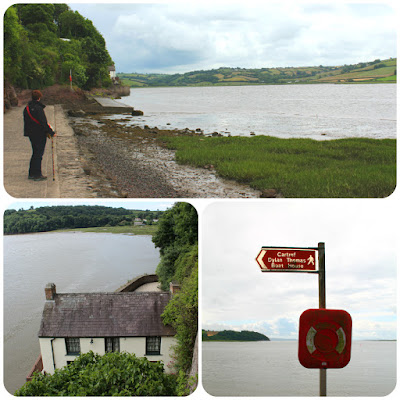 One of his most famous works, Under Milk Wood, was written here. It is an absolute favourite of mine and I have even borrowed its opening line as the title of my very first blog post.

Dylan, with his wife Caitlin and their children, lived in the Boat House from 1949 until Dylan's death in 1953.

From the car park at Laugharne, which is liable to flooding, the Boat House can be seen set in the cliffs overlooking the Taf Estuary. 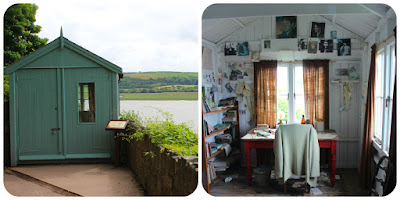 Walking along the estuary and up the steep path leading to the Boat House, we first passed Mr. Thomas's Writing Shed, the inside of which can be glimpsed through the small window. 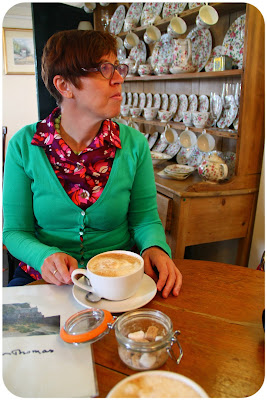 As we already visited the Boat House itself a couple of years ago, we only stopped by for a coffee this time.


Afterwards we returned along the foreshore, where we had our picnic with a view. Not only did our bench have a view, it had a roof too, which was a good thing as it had started raining yet again! 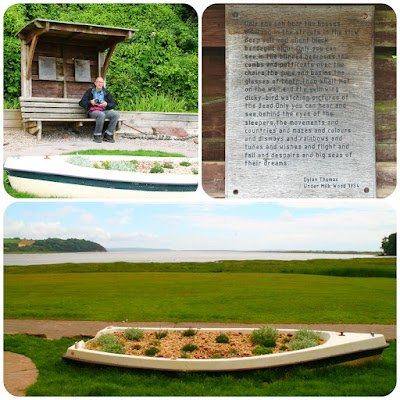 Dylan Thomas is buried in the churchyard here, his and his wife Caitlin's grave marked by a simple white cross. I found the churchyard, and especially the older, overgrown part, quite atmospheric. 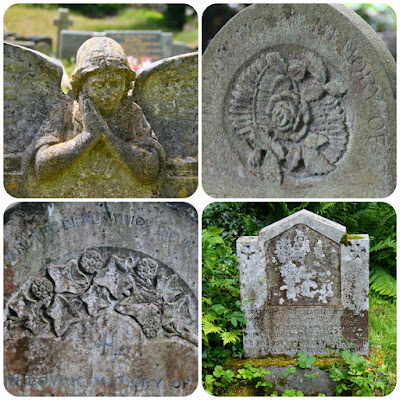 We ended our day by visiting Laugharne Castle, the "castle brown as owls" as Dylan called it in his "Poem in October": 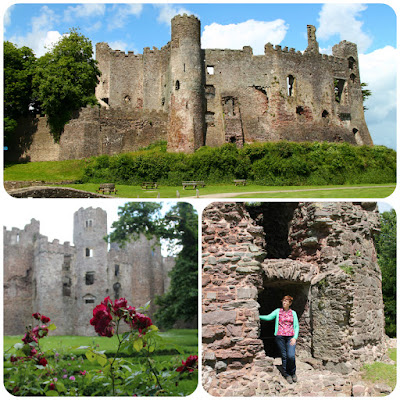 A delightful surprise was the Summer House, where it is said that both Dylan Thomas and author Richard Hughes put pen to paper. I tried to leave my mark by writing a blog post, but the typewriter's ribbon was in an even worse condition than my Corona's! 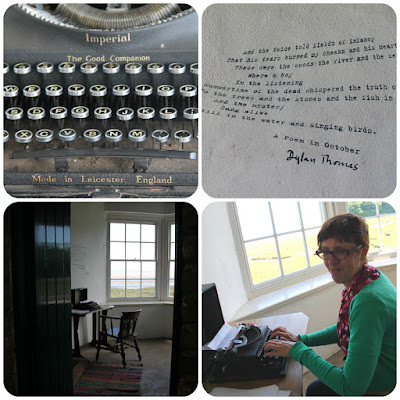 The view from its windows as well as from the castle's ramparts were breathtaking. 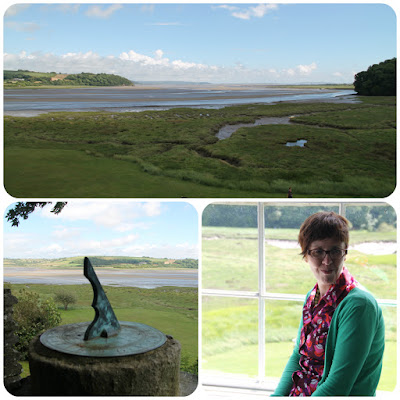 By this time a week had passed and we were already halfway through our holiday. I'm sorry to say that the weather did not improve dramatically during our last week, but I will tell you all about its ups and downs in a next post.

In the meantime, this weekend I have a flea market right outside our front door to look forward to. Let's hope the weather is dry, if not sunny, for it.