I keep having to check the calendar to make sure that my brain is not playing tricks on me. I mean, how can it be that yet another month is drawing to its close and that Spring, in its meteorological sense at least, will soon be well and truly over.

The arrival of June traditionally means it's almost time for our annual holiday, but as something starting with C did put a spanner in the works for two years running, this year our nerve ends are well beyond frazzled. We hardly dare to believe that it's finally happening and that, in fact, in only three week's time, fingers, toes and everything else crossed, we will be back in the UK!

Obviously, my blog hasn't quite caught up with the times as usual, the month of May having only just passed its halfway point here. 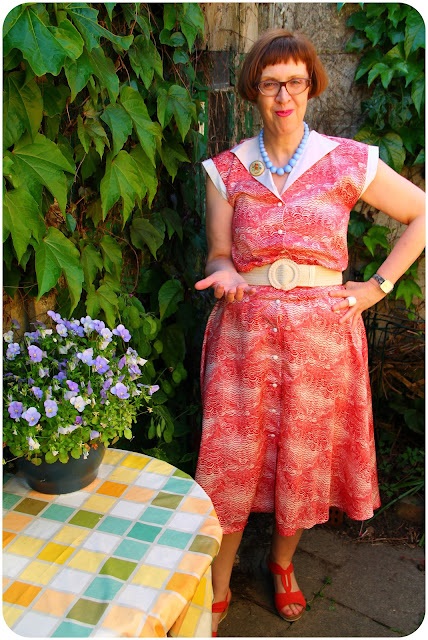 With the mercury having climbed well beyond 25°C, there was talk of imminent rain and the threat of a thunderstorm, but apart from a sky darkening with a gang of angry black clouds and a couple of scattered raindrops which seemed to have lost their way, nothing had happened by Wednesday the 18th of May.
As I had a hairdresser's appointment during lunch break, I breathed a sigh of relief that my coiffure was spared from being spoiled by the untimely arrival of a shower!
The muggy temperatures dictated that I wore one of my favourite Summer dresses, a swishy 1980s does 1950s one with a wavy red on white print and crisp white cuffs and collar. And no, I haven't got the faintest idea why I'm holding out my hand as if for a handout. Did I detect one of those lost raindrops, perhaps? 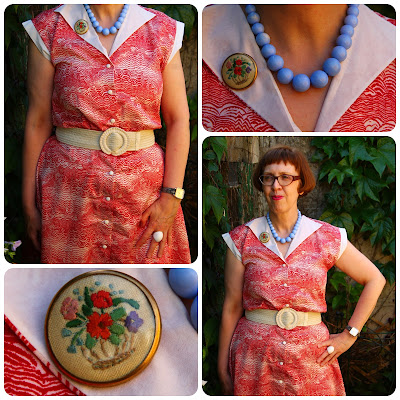 In lieu of the dress's original boring white belt, I used a stretchy cream one with a round buckle. As an aside, these kind of belts are perfect for sitting at my desk all day without it digging into my midriff.
I'd been wearing a light blue cardigan on top when I set out that morning, so the light blue beaded necklace was worn in its honour. The brooch with its tiny embroidered flowers was found in an antiques emporium in Shrewsbury during our last UK holiday. 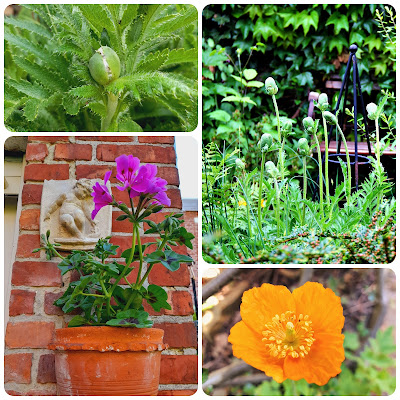 We'd been watching with growing excitement as the first of the flower buds appeared in our Oriental Poppy a couple of weeks earlier, and thus we were more than thrilled to be counting no less than 10 of them by now.
Meanwhile, delicate orange Welsh Poppies (Meconopsis cambrica) were turning up left, right and centre. Their ancestors originally came from a plant sale at an arboretum many years ago - they are quite a rarity here in these parts - and they really seem to have a mind of their own, self-seeding liberally wherever they fancy. 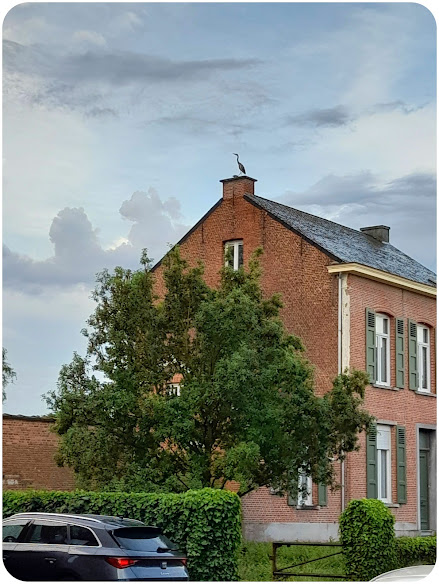 We finally got that thunderstorm accompanied by heavy rains in the early hours of Thursday, with Jos having to jump out of bed to close our bedroom window in order to avoid a minor flood.
Thankfully, it had stopped raining by the time I had to go to work, even though the sky was still oppressively overcast and the temperature had dropped to 22°C. Upon leaving the house, we both happened to look up and spot the heron standing majestically on top of the chimney belonging to the museum of folklore. I just had the time to snap it with my phone's camera when, having made its selection from the breakfast menu, it flew off. 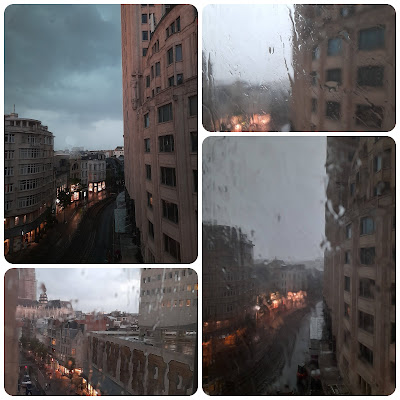 In spite of the sun doing her very best to join us, she never got a look in and in fact, by lunchtime it had been gradually becoming darker until it looked as if time had suddenly accelerated and midnight was upon us. Then the heavens opened with a surge of pent-up water, the curtain of rain driven by an apocalyptic wind lashing against the office windows. Needless to say, I decided against going for a walk during my lunch break! 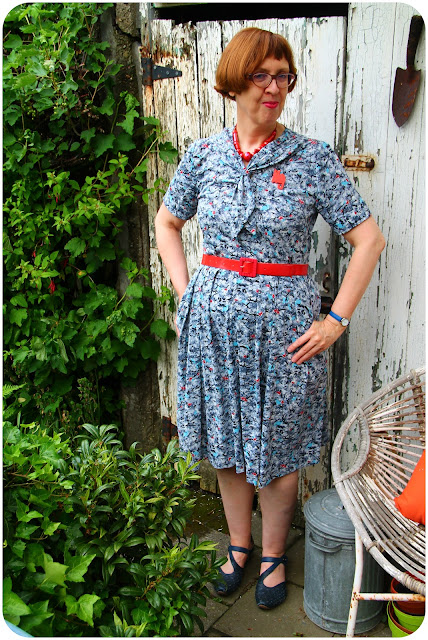 Although it was over in less than an hour, the onslaught had created quite a bit of havoc in the garden, flattening most of the poor Lupines, some of which had broken off as they were unable to bear the weight of their waterlogged flowers. Fortunately, most of them were on their last legs anyway, with a new flush of baby spikes already waiting in the wings. Still, I cut off the still pristine tops of one or two of the battered spikes and gave them another couple of days of life on our kitchen shelves.
Thankfully, we'd already staked the Delphiniums, sparing them the same fate as the Lupines. 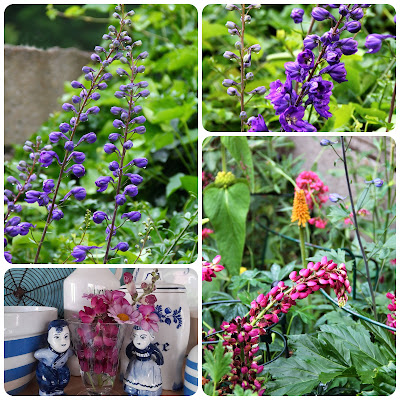 The dress I was wearing is another vintage Summer favourite, dating from and impersonating the same decades as Wednesday's. It's got an abstract Mid-Century pattern in black, blue and red, an invisible zip at the front and a most delightful tie collar. Oh, and pockets! Let's not forget about them!
I picked up the red bits in its pattern with my accessories which included a vinyl belt with a rectangular buckle, a glass beaded necklace, glass ring and cat brooch. 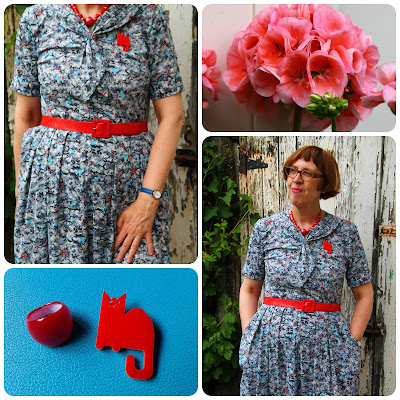 It was only when we were taking the outfit photos that I suddenly noticed my ring was missing. I was fairly certain I was still wearing it when I got home, but couldn't find it anywhere. Turned out it had slipped from my finger when I was trying to save the Lupines, as I found it winking at me in the border. 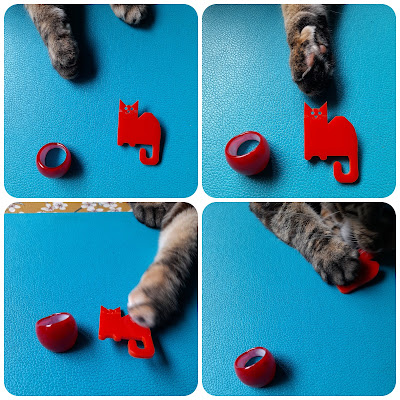 While Jos was out on his usual newspaper round on Friday morning, I made close-ups of the ring and cat brooch. Or at least, I tried to do so, as a certain someone was adamant on giving me a paw! Funny that she only went for the cat brooch an couldn't care less about the ring.
The charity shops provided the bulk of my outfit that day as everything but my shoes and pink plastic ring was charity shopped at one time or another. 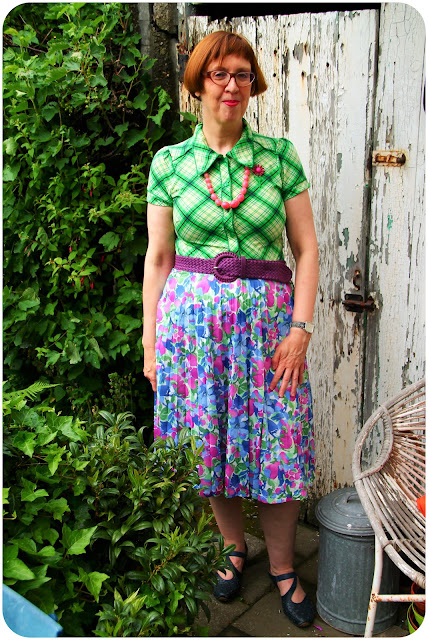 The floaty floral pleated skirt was bought at Oxfam in October 2020, while the King Louie blouse, if I remember correctly, was a lucky find in our most local charity shop. It's got a deep purple stripe in its plaid, which prompted me to wear the purple woven belt.
Further accessories were a pink beaded necklace and metal pink-hearted flower brooch. The latter has a blue, yellow-hearted twin, which you can see here. 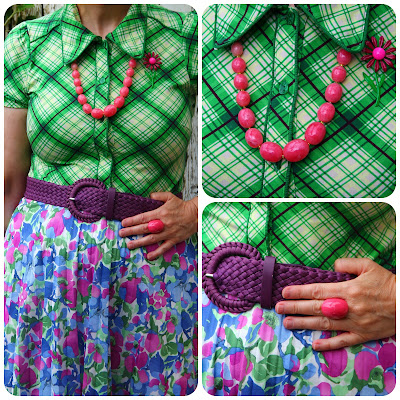 Another thunderstorm accompanied by gale force winds had been forecasted for the afternoon so, after Jos's return, we wasted no time in making a start with our weekly charity shop trawl so that we'd be back at home before all hell broke loose.
Our first shop, usually one of the better ones, was a disappointment as there were lots of empty rails and shelves due to a refurbishment. The second shop, however, more than delivered, with  no less than two skirts and three tops ending up in my trolley. 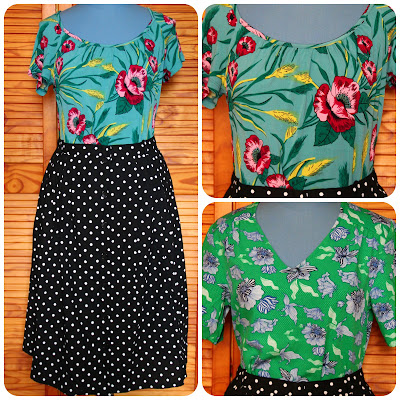 The black and white cotton polka dot skirt is button-through and has pockets, while the ochre and brown tartan one is a wool blend, both its material and colour making it perfect for Autumn.
The aqua top with its blowsy flower pattern is by King Louie, while the loose fitting green, blue and cream one's label had been removed. Always on the lookout for yellow based blouses, the cheerful sunshiny yellow cap sleeved one sprigged with blue and white flowers was a no brainer! 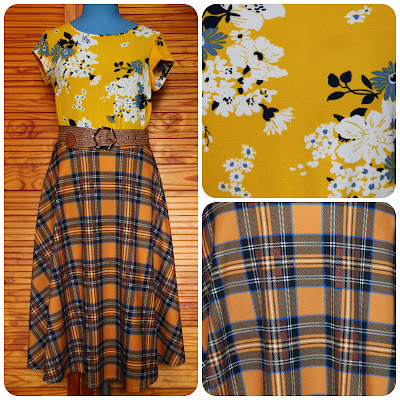 It was well past midday by now and dark clouds were scudding across a granite grey sky. We hurriedly scoffed the sandwiches we'd brought before driving home. Soon, big fat raindrops splattered our windscreen, but it was only after Jos had dropped me off at Dove Cottage that it started raining in earnest. Taking the car back to the garage, he had to wait out the worst before being able to walk home. 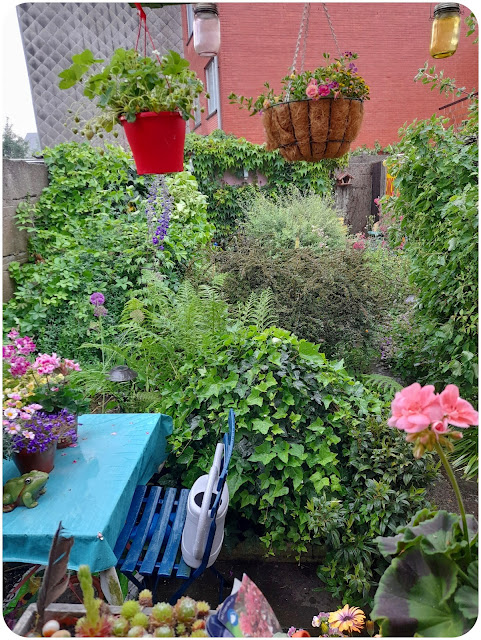 That, however, was the long and short of the forecasted storm, which much to our relief turned out to be one in a tea cup!
The garden breathed huge sighs of relief as its thirst was finally quenched and, opening our kitchen window, I breathed in that heavenly earthy scent which follows the first rain after a prolonged dry spell. 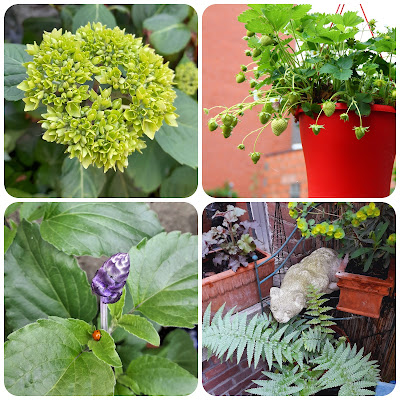 If late frosts had somewhat stunted the growth of our Hydrangea, it had now been making up for lost time with a plethora of acid green flower heads, some of them hinting at the blue hue they will eventually develop into.
There will be a plethora of strawberries in our hanging bucket too, now going into their third season.
The Salvia on the bottom left has survived the Winter in its pot and its visitor, Ms. Ladybird, and her future offspring will hopefully make a meal of its black aphids infestation. 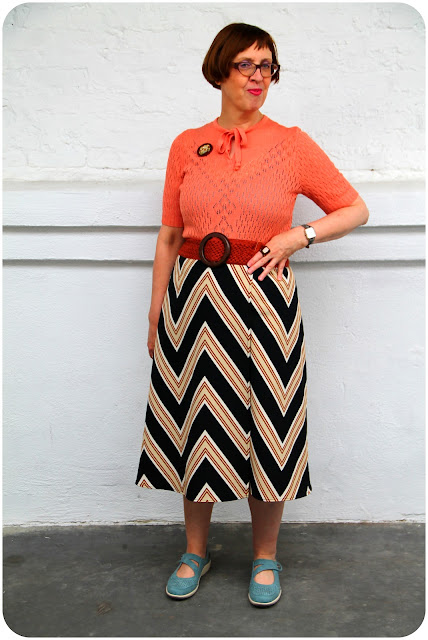 Sunny spells alternated with patches of cloud on Saturday, but for once it remained dry all day. The temperature in the meantime had dropped another couple of degrees to a modest 19°C.
We slept late-ish and, after our usual fruit & yoghurt breakfast, I spent the morning doing household chores while Jos treated the garden to some well needed TLC, pruning back the Ivy and giving the Spirea a haircut.
I decided to give my recently charity shopped chevron wrap skirt its first outing. The verdict is that it's a joy to wear although I needed a black half-slip worn underneath for modesty's sake. 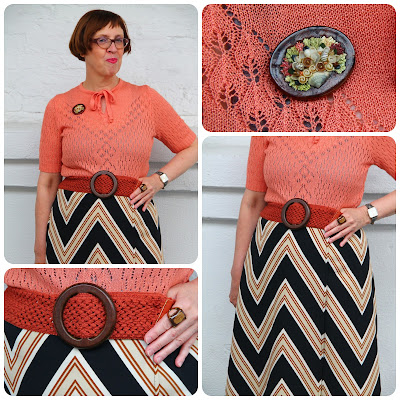 The short-sleeved salmon pink ajour knit jumper is an old Think Twice find, while the crocheted belt with its huge round wooden buckle was picked up in the Mango sales in the Summer of 2020.
I picked up the wooden brooch encrusted with tiny shells from our favourite indoor flea market in April 2018, while the ring was bought in the closing down sale of a high street accessories shop. 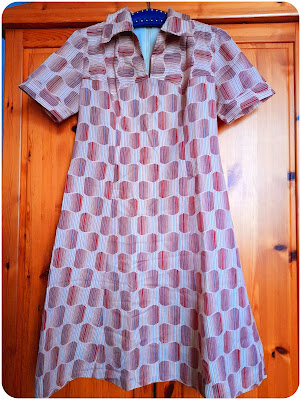 The afternoon saw us driving to an out of town toy shop to pick up a present for grandson Cas, who will be celebrating his first birthday next Sunday. After weeks of trawling the charity shops, we'd had to admit defeat as we couldn't find anything that fit the bill. Anyway, the toy we eventually decided on has been thoroughly tried and tested by Jos in the meantime :-)
On our way back, we nipped into the small charity shop in a neighbouring village. Not expecting to find anything, I was thrilled to happen upon this groovilicious handmade dress.
That's all I've got time for now, so I'll be back with Sunday's adventures and what happened the next week in a couple of days. See you!
Posted by Polyester Princess at 19:11