Sunday the 24th of April was another one of those sun-drenched Spring days on which the brilliant blue sky observed through the window belied the fact that it was still somewhat chilly out there.

Nevertheless, the warmth of the sun trapped between the walls in our sheltered garden made me shed a layer as I was planting out the perennials we'd brought back from the garden centre the other week.

Still, it's always a degree or two colder outside Dove Cottage's confines, and with the thermometer no longer fooling us after twenty-three years, the layers came out again when we decided to go for a mid-afternoon walk. 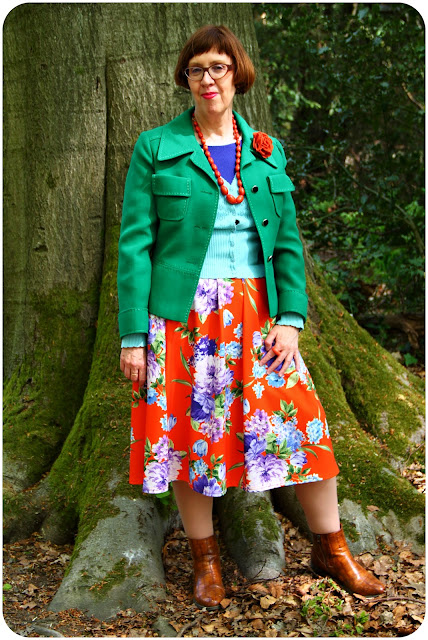 My outfit was a repeat of one I wore to the office earlier that week, centred around one of my favourite skirts, in an orangey red patterned with clusters of blue and purple flowers. Bought from a fast fashion shop on the high street, it has been in my wardrobe for many a year, making it what I'm calling fast fashion worn slowly.
The green new wool jacket is vintage and from Think Twice. It is a bit snug and has therefore been in and out of my flea market boxes once or twice until I finally decided it was too good to get rid of. It came with its very own funky black vinyl and white metal links belt, which I removed to make it feel less constricted.
The park we chose for our walk is in a neighbouring village and is part of the former pleasure grounds of an old castle estate called Solhof, whose history goes back to the 15th century. The original castle, which was surrounded by a moat, was demolished for unknown reasons. Only the two watchtowers on either side of the entrance, dating from around 1550, remind us of its former glory.
There are two outbuildings, formerly the coach house and caretaker's house, which were built in Neo-Renaissance style in the early 20th century. The current neoclassical mansion - much modernized in the meantime - dates from the late 19th century.
Today, the estate still covers 7.5 hectares and has been protected as a landscape since 1975. After the death of its last owner in 1984, the property was purchased by the municipality. Subsequently, in 1990, the buildings were sold to a hotel chain, while the park remained village property. 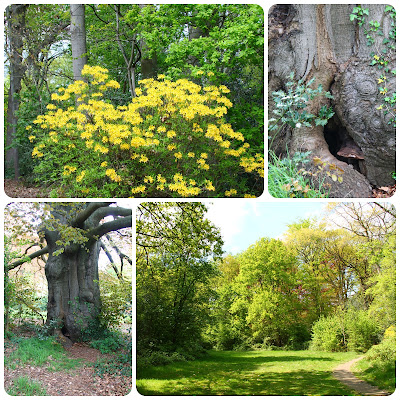 The park is laid out in English landscape style and is said to be inspired by Capability Brown.
There's a grassy area overlooking the ponds and bordered by groups of trees. Behind these the vegetation changes into park woodland complete with meandering paths and monumental 100 to 150 year old trees. 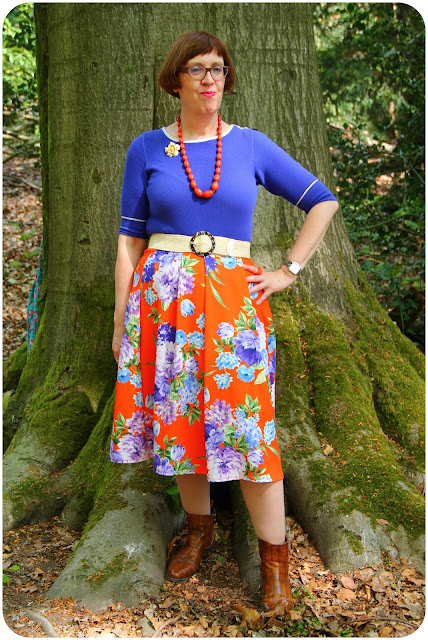 Case in point is the giant I was posing in front of, showing you what I was wearing underneath that green jacket. By then it had warmed up sufficiently to discard the pale blue King Louie cardigan I'd added as an extra layer.
The blue three-quarter sleeved top was a charity shop find. It's from Libelle Collection, which was produced for the eponymous Dutch and Flemish women's magazine. As a nod to its cream edging and shoulder buttons, I added a vintage cream flower brooch. 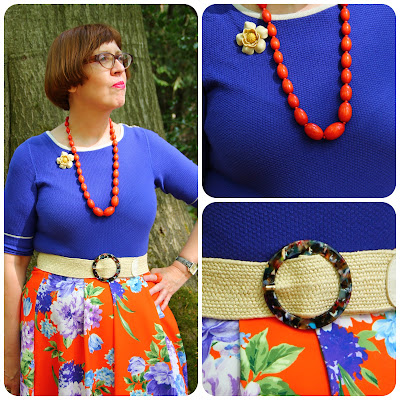 The skirt's orangey red was reflected in my orange beaded necklace, while I used cream again for my stretchy belt. The blues in its multi-coloured round plastic buckle paid tribute to the skirt's print.
The sky too was playing a matching game with my outfit, a heavenly blue dome in which puffy clouds billowed, propelled along by the breeze, playing peek-a-boo with the multicoloured leafy canopy. 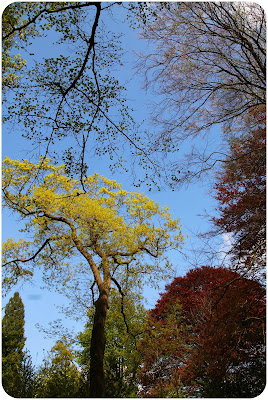 Spring offers a veritable sensory delight, and the air was alive with the aroma of blossoming shrubs and trees, mingling with the rich loamy scent wafting its way up from the woodland floor.
The honeysuckle scent of Yellow Azalea (Rhododendron luteum) reached our nostrils long before we spotted the shrub in all it golden yellow glory.
Before we continue, let's have a quick look at Jos's outfit. His pink chambray shirt was a recent charity shop find and is a great companion for his green cord jacket. The latter was charity shopped as well, and has been a Spring and Summer staple for many years. First outing this year for one of his beloved Panama hats, bought brand new from an old-fashioned hat shop. 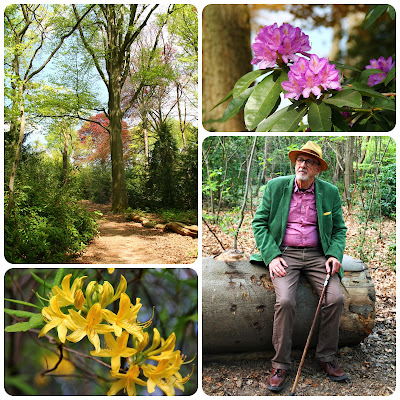 What a joy it was to discover the earthen mound crowned by a wooden gazebo on our first visit to the park back in 2018. It was only afterwards that we learned that the mound conceals an ice house, which is said to be still in excellent condition and is one of the rare remaining examples of its kind in the area.
It was here that the ice scooped up from the moat in Winter was stored, the insulating layer of yews and of the mound itself keeping it cool even in the Summer months. 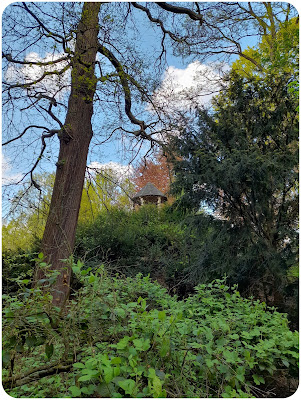 At present, small adjustments have been made to make the ice house suitable as a hibernation place for bats.
The gazebo, with its gnarled and graffitied pillars, can be reached by climbing a narrow winding path which spirals up the mound. 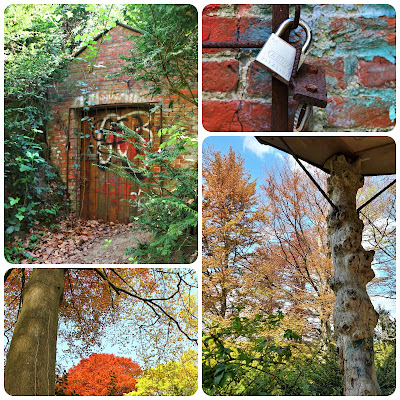 Two Girl Guides were making their way up just as we were coming down and I overheard one of them say she always hurries past the ice house as it was giving her the creeps!  No need to worry, I should think, as whatever horrors are lying in wait inside have been firmly locked in! 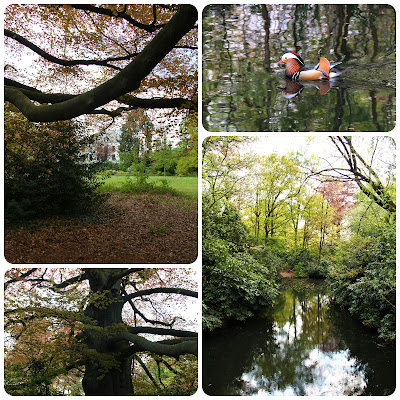 We sat down on a sunny bench overlooking the moat and watched the antics of the various waterfowl who have made this wonderful place their home.
They're haughty creatures, though, turning up their noses at the crumbs of bread a family was throwing them. Perhaps they are used to fancy leftovers from the hotel? 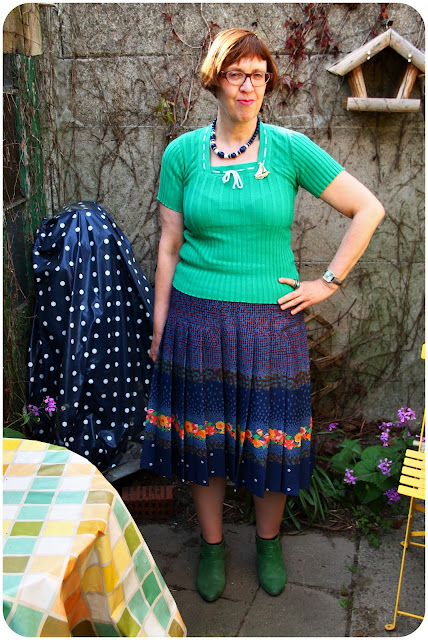 After this short two-day weekend I wasn't at all ready to face another working week. But needs must and it wasn't too bad in the end.
With temperatures hovering between 13 and 17°C from Monday to Thursday, and the sun out in full force on all four days, I made the most of my lunch breaks, going for a stroll and soaking up some sunshine.
Wednesday found me at Melting Pot, the vintage per kilo shop, again, where I managed to find yet another two skirts, one of which already got its first outing on Thursday.
This blue pleated one in a mix and match pattern including a row of cheerful yellow, orange and pink flowers, shows all the signs of being somebody's perfectly executed handiwork. 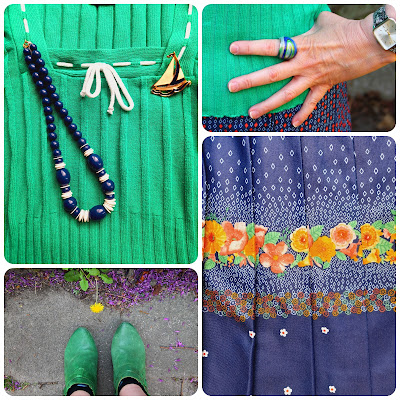 I love a blue and green combo, so I took my lead from the bits of green in the skirt's pattern and added a sailor style short-sleeved jumper. Charity shopped in May 2016, it has featured on the blog many a time in the past 6 years. The blue and white metal sailing boat brooch was the obvious choice, as was the beaded necklace. My swirly blue and green glass ring was picked up at a craft stall in Bruges in April 2019.
Oh, and did you notice my green suede ankle boots? These too were a charity shop find. They offer a nice contrast to the Honesty confetti and Dandelion in our garden. Having no lawn not to mow, I'm doing No Weed May instead. Well, not just May, actually. Weeding isn't exactly high on my list of things to do. After all, weeds are flowers too, once you get to know them, as Eeyore famously said in the Disney version of Winnie-The-Pooh! 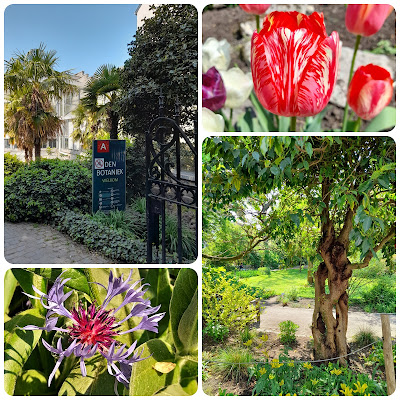 With Thursday being the warmest day of the week so far, I made the effort to go just a tiny bit further afield during my lunch break and walk to Antwerp's small botanical garden.
The garden is a true oasis just a stone's throw from the city's busy shopping streets and although there isn't a better place I can think off to unwind, I don't visit it quite as often as I should. 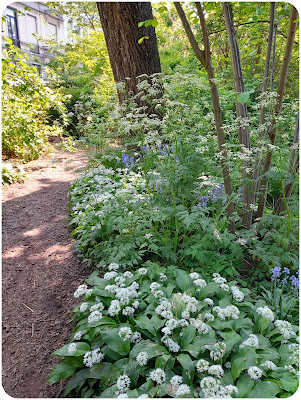 To be honest, I thought parts of the garden looked a bit arid, which I'm sure is caused by the recent lack of rainfall. I was also quite put off by the construction work going on in its upper right corner, where the site of a 15th century hospital which backs onto the garden is being turned into a 5-star hotel.
As I walked the garden's paths and admired the plants and flowers, I couldn't help thinking of Kezzie. Not only because she was with me when I was last here in February, but also because the garden was simply inundated with wild garlic, which I know she loves to pick. 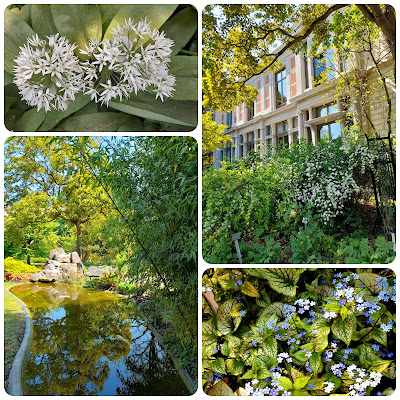 Before I knew it, my lunch break was nearing its end, and I had to hurry back to the office for the final hours of my working week.
Would the weekend which followed be a another sunny one? In my next post I will tell you all about. See you again soon!
Posted by Polyester Princess at 19:17