In my Springtime garden

After a sunny fun and action packed Easter weekend, it was a bit of a wrench to get up at silly o'clock again on Tuesday the 19th of April.

As usual after a long weekend there was a lot of catching up to do at the office, particularly since not all our business associates celebrate Easter and had continued sending us emails non-stop. Nevertheless, with the sun streaming in through the office windows and the mercury having climbed to 19°C by midday, wild horses couldn't have kept me inside during my lunch break, when I went for a little wander. 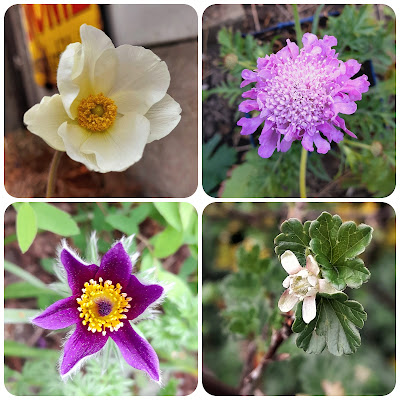 Wild horses couldn't have kept the garden from erupting into a Springtime extravaganza either, so ambling down the garden path after work always yielded one or two surprises.  Joining the snow white flowers of Anemone sylvestris (top left) and the first of the lilac pincushions of Scabious 'Butterfly Blue' (top right) was the one and only fuzzy purple, yellow-hearted flower supplied by Pulsatilla vulgaris (bottom left).
Can you guess the identity of the white flower on the bottom right? Oh, alright, I'll tell you then. It's much tinier than suggested by the photo and if all goes well it will eventually develop into one of our ruby-red gooseberries! 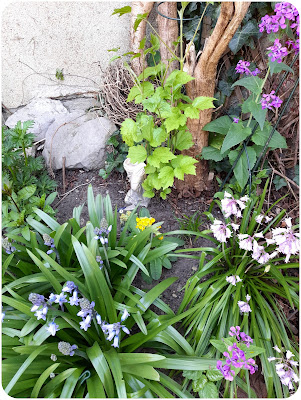 I absolutely love the semi-wild corner between the bench and the garden wall. The pink Bluebells have now been joined by a host of blue ones, which seem to be thriving here, contrasting gaily with the cheerful yellow Cowslips. And yes, there's some self-seeded Honesty here as well.
The lime green leaves to the latter's left belong to herbaceous Clematis jouiniana ‘Mrs. Robert Brydon’, which will erupt in a fireworks of diminutive lavender blue flowers in late Summer. 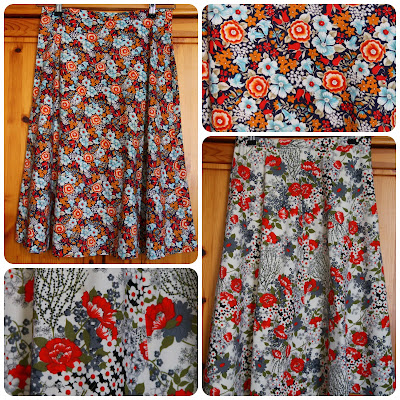 The temperature - still a mild 18°C - kept tempting me outside during my lunch breaks on Wednesday and Thursday.
I had a hairdresser's appointment on Wednesday, so not much wandering was being done, but I more than made up for this on Thursday. My wanderings that day took my feet into the direction of two of the Think Twice shops which alas I both left empty-handed in spite of it being one of their sale days.
I did, however, strike lucky in a shop called Melting Pot, which sells vintage and second-hand clothing per kilo. 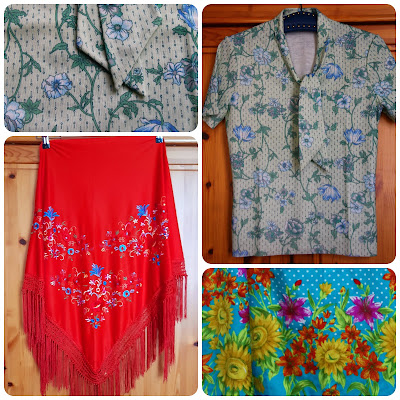 I paid € 12,05 for two floral vintage skirts, a tie-neck Trevira blouse, a turquoise scarf with a pattern of Summer flowers, and a red fringed shawl with floral embroidery. Result! 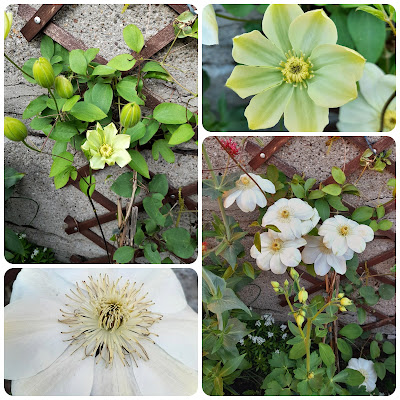 Happiness is watching a Clematis develop big fat buds and then finally flower after its barren first year.
I can't get enough of the initially cream and green flowers which mature into pure white saucer sized ones. Having long had a penchant for Clematis, this 'Guernsey Cream' variety is definitely one of my favourites.
For the gardeners among you, it is one of the early, large flowered hybrids and belongs to Group 2, to be pruned back in February or early March. That said, I didn't do any pruning at all! 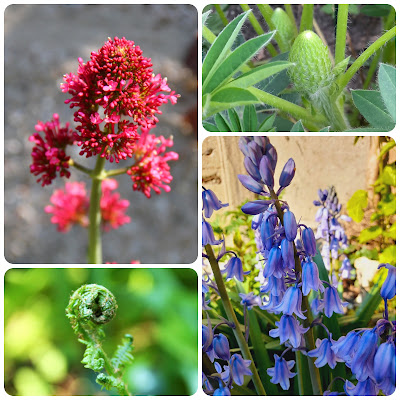 Other garden surprises - other than the prolifically flowering Red Valerian and Bluebells - are the developing flower spikes in our Lupines and the first of ferns which will turn Dove Cottage's garden into a jungle before too long.
The working week might have been only a 4-day one, it still felt weird to be going into the office on a Friday. Weirder still was having only a 2-day weekend, which I insist simply isn't enough!
Our first task on Saturday was a pleasurable one: booking our Eurotunnel crossing for June! With our cottage already booked an eternity ago - in November 2019 to be exactly - and our passports at the ready, all we have to do now is keep our fingers and everything else crossed that our longed-for UK holiday will finally be happening. 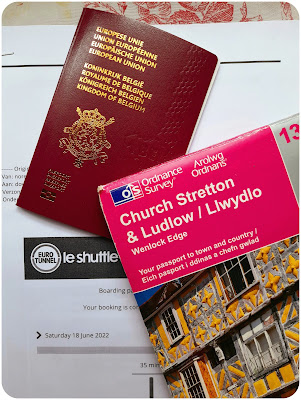 Having long been out of the habit to go charity shopping on a Saturday, we were at a bit of a loss at first, until we decided to bite the bullet and go ahead, driving down to the shop in Willebroek which we had last visited in June 2021. If pickings had been meagre back then, they were non-existent now so, our rummaging urges unsatisfied, we drove back to the one in our very own village. 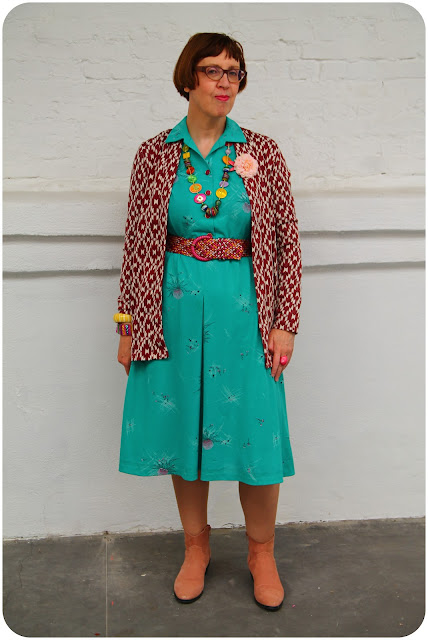 I'll show you what I found there in a minute, but let's have a look at my outfit first!
Browsing the rail of short-sleeved dresses which graced my wardrobe after the first installment of my seasonal changeoever, my eyes alighted on this vintage turquoise crepe dress. A Think Twice find from early 2020, changing its tired and washed out buttons was one of the first tasks I set myself during Lockdown # 1. Its new buttons, from my vintage stash, match the pink-ish bits in the dress's pattern almost exactly. 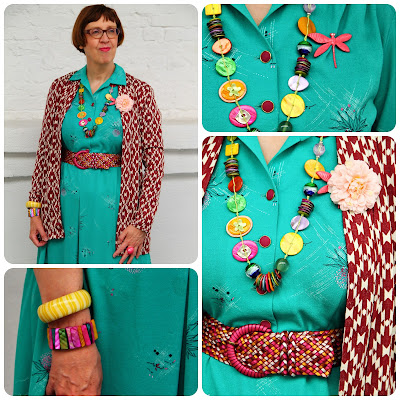 As does the painted metal dragonfly brooch I pinned to it. More touches of pink appear in the multi-coloured woven belt, as well as my shell bracelet and one or two of the beads of my necklace, all of which were charity shop finds.
There's yellow in both the belt and necklace too, which I echoed by picking a yellow and white zebra striped bangle to keep the bracelet company.
The jacket with its geometrical pattern is H&M by way of the charity shops. I'd actually put it into one of the redonation bags but questioned by sanity just in time. A regret-me-not, as Sheila would say. 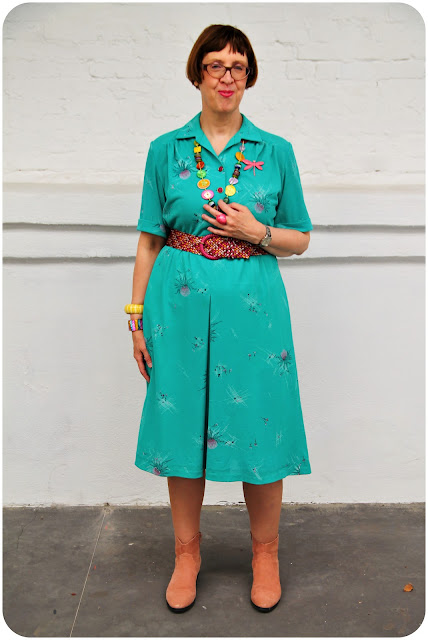 It was supposed to be 19°C but the wind made it feel quite a bit chillier. With on and off sunshine, I again questioned by sanity at one point, as I'd decided to leave the house coat-less. The jacket is only a thin one, worn in lieu of a cardigan. By the time we made it to our local charity shop, Jos was gasping for a cup of coffee, so while he made a dash to the cafeteria, I took my time browsing the clothing aisles. I was actually on the lookout for plain Summer tops, and soon found the green butterfly-sleeved one, although my camera insists on making it appear more turquoise than it actually is.
The green wraparound skirt with its orange and white swirls and flowers found its way into my basket as well. 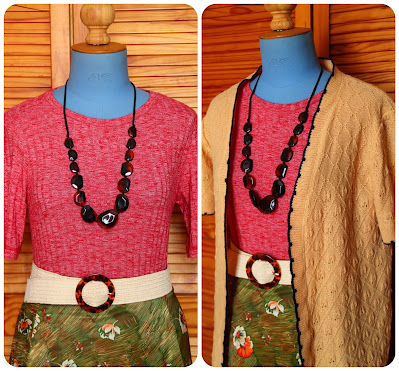 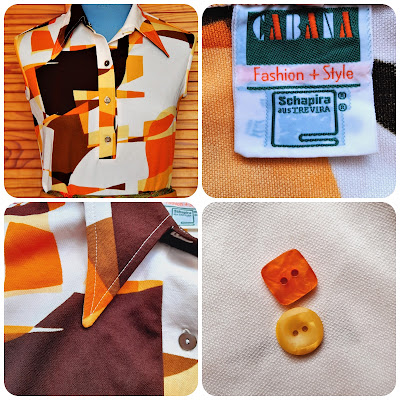 When I was photographing my finds, it suddenly dawned on me that I never shared those from our last minute charity shop trawl the day before we went to Bruges.
They included a grey and white striped seersucker skirt, an olive green patterned vintage pussy-bow frock and funky short-sleeved floral top by the Danish ICHI label. In fact, I already bought the same top but in a smaller, and slightly too snug, size last Summer, which has already been redonated in the meantime. 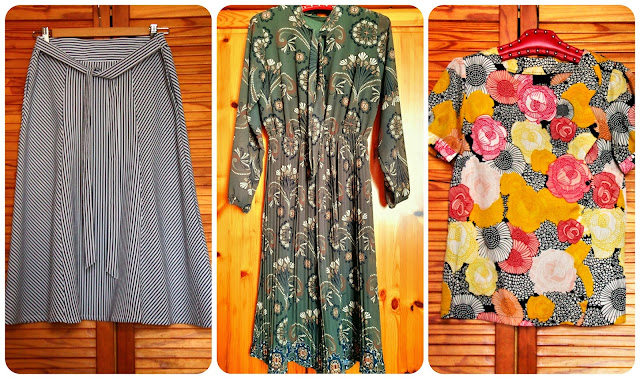 The day ended with a glorious sunset, the sinking sun's tangerine glow filtered by the trees beyond our garden wall and illuminating our garden, setting fire to the orange pom poms in the Ranunculus on our plant table. 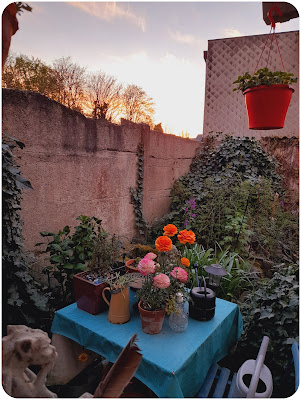 That's all I have time for now. I'll be back with what we did on the Sunday in a couple of days.
But before I leave you, how about some kitty TV?

Posted by Polyester Princess at 19:10