What fools we are to think each year that April will be well-behaved for once. But no, it turns out that once again she hasn't been able to make up her mind which season she actually belongs to. Starting with snow and barely above freezing point temperatures on her very first day, she has by now treated us to a couple of mild Spring days as well as a handful of summery ones. But then there were those bright sunny days which came accompanied by tempestuous winds, with a distinctive nip to them which wouldn't go amiss on an Autumn day.

There has been a distinct lack of April showers, though. In fact, rain has been mostly conspicuous in its absence, depleting ground water levels and leaving nature - and our gardens - dusty and dry.

We'd just passed the month's half-way mark on Saturday the 16th of April, and the sun was out in full force from the word go. With forecasted highs of 17°C, we had every reason to spend time outside. I was determined, however, to make the most of the 4-day weekend and squeeze in some jobs I'd been procrastinating on. 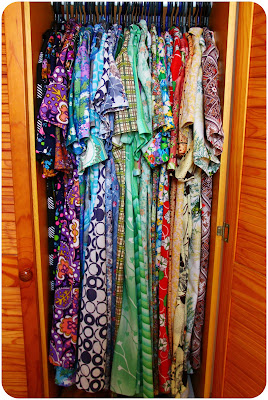 Such as making a start with the biannual wardrobe changeover!
Always a daunting task best tackled in batches, I took a deep breath and started by thinning out my long-sleeved dresses, folding them away and filling the empty hangers with short-sleeved ones.
I'm casting a critical eye over everything while I'm at it, making piles of the things I'm no longer wearing, either to be redonated to the charity shops or to be sold on our local flea market which I'm hopeful will be happening again this year. Decisions, decisions! 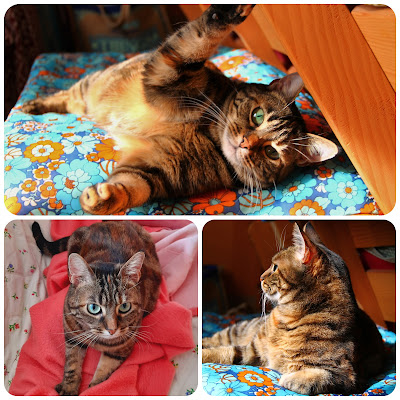 I had help, obviously, although Bess is quite a bit more paws-on than Phoebe ever was. I had to rescue several dresses I'd temporarily put out on the bed from being cat-handled and it was all I could do to prevent her from running off with one or two of the belts. Then the pile of empty hangers got her interest, so I let her fight them for a while, until she caught sight of my dressing gown which I'd carelessly forgot to hang up. Look at that cheeky face! 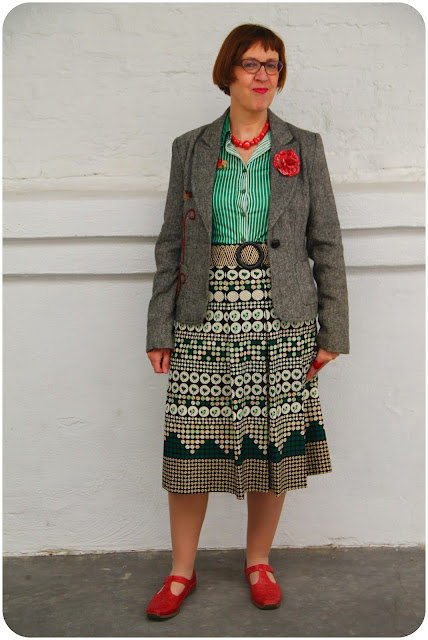 By lunchtime, I called it quits, leaving the rest for another day, whenever that will be.
We were lured outside by the siren call of the garden centre, so we walked down to our garage and, before hopping into our car, took advantage of our garage's white painted brick wall to make outfit photos.
Green and red were the main ingredients that day on which no less than three items in my outfit had their very first outing. The most recent of these were the red Kiarflex shoes charity shopped the previous week. The other two being the skirt - a Think Twice find last Autumn - with its eye-confusing green and off-white pattern, and the green and white striped blouse charity shopped back in February. 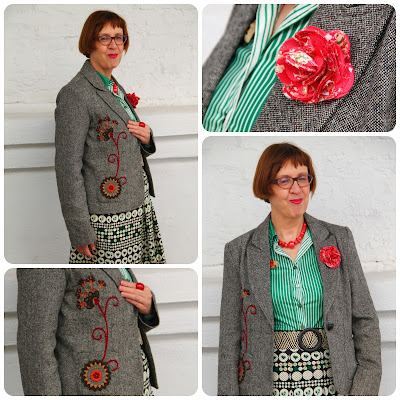 In spite of the day's sunny outlook, a brisk wind coming straight from the east made me grab this grey tweed blazer. A charity shop find in October 2018, it was the fabulous embroidery, although sadly on one side only, which cinched the deal. To its opposite lapel, I pinned a blowsy red flower corsage to balance things out. 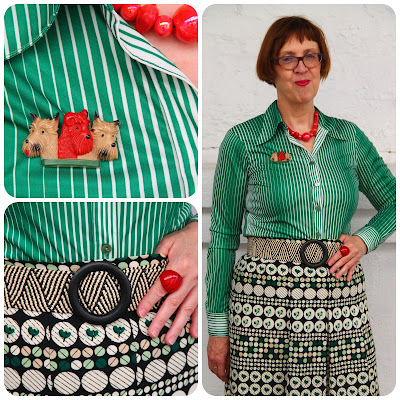 More red was added with my vintage Scottie dog brooch, glass beaded necklace and ring.
At my waist, one of my stretchy black and white chevron belts, its round buckle echoing the circles in my skirt's pattern.
Although ostensibly our visit to the garden centre was prompted by the need to buy some wild bird seeds, I knew there was no way I would be able to make it past the plant displays. 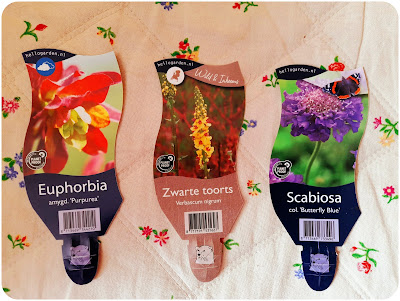 Apart from two pots of Sweet Peas and a hanging Pelargonium, these three perennials made it into our trolley.
Ever since our recent walk in the park in Boom, where I posed in front of some Euphorbias, I had a hankering for one, opting for Euphorbia amygdaloides 'Purpurea', which has acid-yellow blooms and contrasting reddish-purple foliage. It's currently gracing our passageway table - where it is able to preen itself in the mirror - until I've found it its permanent spot in the garden. 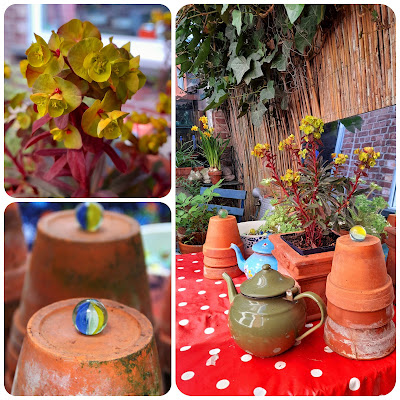 We also picked up some more solar lights, including four small stake lights to line the garden path and  two hanging metal baskets, in sunny yellow and orange.
The best thing is that we hardly spent any money, as we'd saved enough on our loyalty card to pay for most of our purchases! 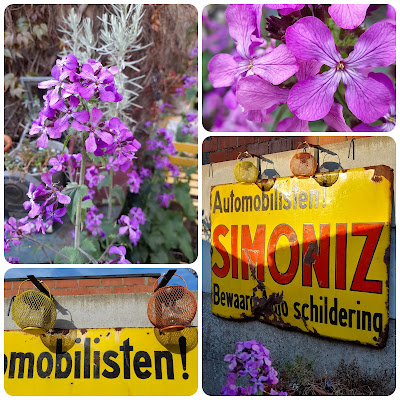 Back at home, I pottered around the garden, doing some odd little jobs, while Jos busied himself with the solar lights, hanging the baskets from the brackets holding up the rusty enamel advertising sign. The latter was a freebie from our opposite neighbour during the first lockdown in April 2020. It might be a bit worse for wear, but then again it's 90 years old, dating from 1932.
As you can see, our garden is inundated with Honesty (Lunaria annua), which has self-seeded all over the place. I need to thin them out before they completely take over the garden, but I'll wait until they have finished flowering. Their violet flowers are such a cheerful sight! 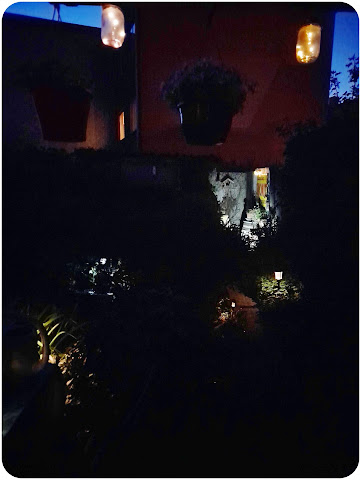 We couldn't wait for darkness to descend that evening to see all the new and existing solar lights in action. Isn't it magical?
Uncharacteristically, Easter Sunday was a sunny day with the mercury climbing to an unheard of 19°C.
Determined to wear all the out-of-season clothes I bought over the Winter months, I picked the dress I'd snapped up at half price in the January sales. Although it was part of the Winter collection, I considered it far too thin to wear before the temperatures hit the double figures, and even now I was wearing it with a vintage slip layered underneath and a cardigan on top. 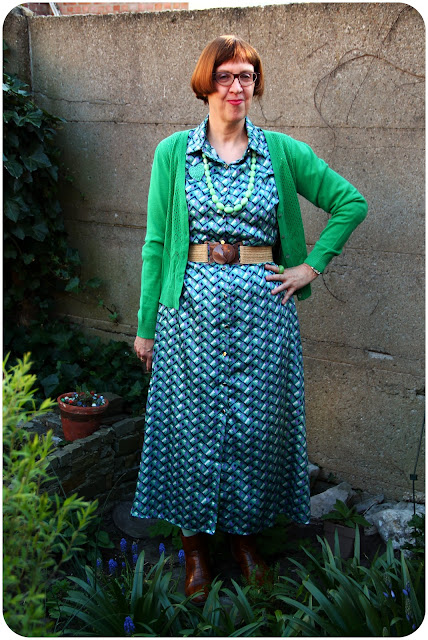 The dress came with a self-fabric belt, but I thought it looked a million times better with one of my stretchy ones. Isn't its buckle spectacular?
I used different shades of green for my accessories (brooch, necklace and ring) and I was wearing opaques in the palest of greens. You can just catch the tiniest glimpse of it in the above photo. 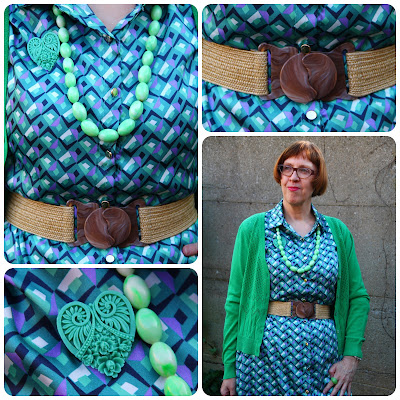 Visiting an indoor flea market might not be the obvious choice for such a gorgeous day but we wanted to pay it at least one visit before they close down for the Summer months in June. We hadn't gone for a browse there since its October edition, which was the first one since all events had to be canceled due to Covid-19 eighteen months before.
The Easter holidays and the sunny weather had somewhat conspired against it, though, as there weren't as many stalls as there used to be. Sadly, for those stallholders who had made the effort, the number of browsers was rather disappointing as well. Not that it bothered us, as it meant we had plenty of space! 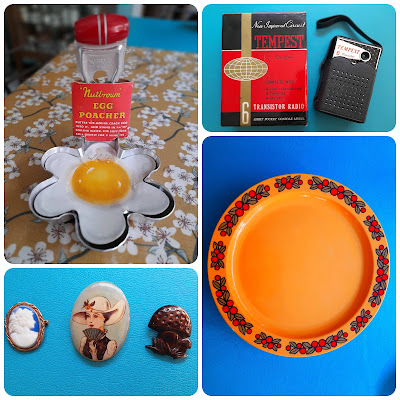 It was a joy to wander among the stalls like we did in the olden days, although, clearly out of habit, it took us several aisles before we made our first purchase. At Tanja's stall - one of our favourite sellers - Jos pounced on the late 1960s transistor radio, still in its box and complete with all its accessories (top right). Meanwhile, at the same stall, I fell for the Nutbrown egg poacher for our kitchenalia collection, which Tanja kindly threw in for free!
A set of six vintage plastic Emsa plates was waiting for us at another of our favourite stalls, Ilona's. They'll be perfect for having breakfast or lunch at our little garden table.

It's almost a given that I'm adding to my brooch collection when visiting this market, and this time was no exception. The cameo brooch on the left, with its unusual cobalt blue background, as well as the cute plastic mushroom brooch on the right, were both from the same stall, yet another one of our favourites.
The 1930s brooch in the middle was found on a random stall in the final aisle. 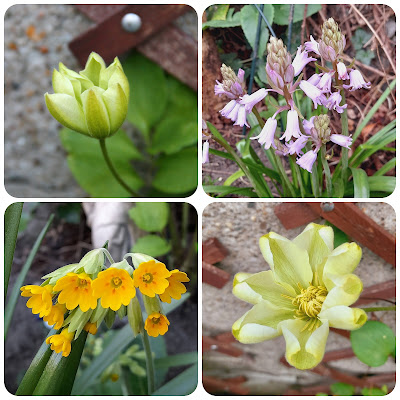 Easter Monday saw a repeat of Sunday's weather, although it did take a while to warm up to the forecasted 19°C.
Wandering into the garden, I was pleased to see that by now quite a few of the fat flower buds in our Clematis "Guernsey Cream" were in various stages of opening (top left and bottom right). At the time of writing it proudly bears at least ten large cream with a tinge of green flowers. It's supposed to flower from May to July, so ours is definitely an early riser!
There's a profusion of bluebells as well, the pink ones next to the bench being the first ones to flower. I love the pop of bright yellow supplied by their nearest neighbours, the Cowslips. 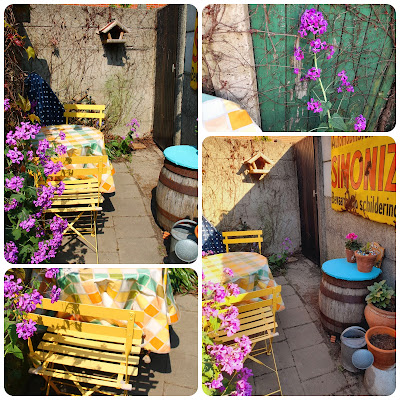 The afternoon was spent sprucing up the small paved area at the back of our garden, which we rather grandly call the courtyard. While Jos tackled the tangle of Ivy and Virginia creeper and swept up the leaves and other debris accumulated in its corners, I checked over the pots containing the remains of last year's annuals, discarding those which didn't show any signs of life.
Cleaning the table and chairs, as well as the vinyl-clad top of the old barrel, was next on my list of things to do.
We also removed the as good as dead honeysuckle growing in the bed underneath the bird feeder at the back. It's looking a bit bare now, but I've got plans! 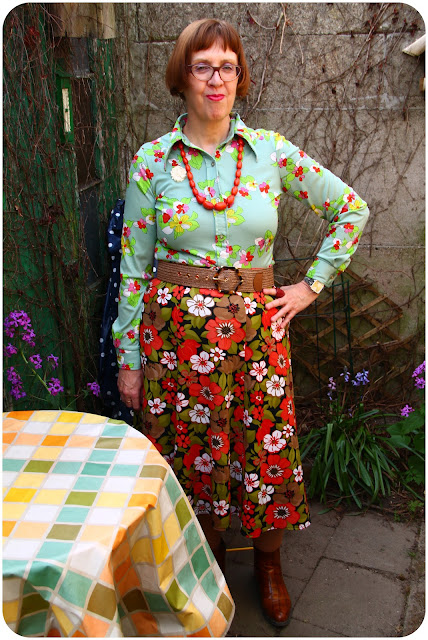 Finally, let's have a look at the day's outfit, although I admit to changing into my gardening gear before tackling those jobs.
Both the skirt and the blouse are vintage and have proved to be wardrobe staples over the years. The skirt, with its profusion of moss green, orange-red, white and brownish flowers, was part of a charity shop haul in March 2019, while the pale green blouse was bought from Think Twice in Bruges while on a day trip for Jos's birthday in September 2019. 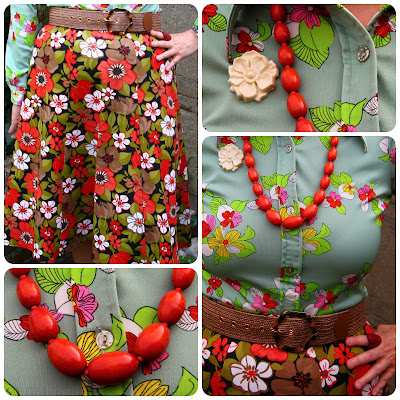 While both the brooch and the necklace were second-hand finds as well, the stretchy belt with its hexagonal buckle was a naughty retail buy about a year ago. No regrets, though, as it has been worn and featured on the blog many times in the past year.
So, that's the Easter weekend wrapped up, and with the next weekend being only a regular two-day one, I wasn't exactly looking forward to the week ahead. But I'll tell you all about that in my next post!

Posted by Polyester Princess at 19:08