Hello, and welcome to the third and final part of my Bruges travelogue!

Following Wednesday's exertions, we'd slept the sleep of the dead, waking up bleary-eyed when our 8 am alarm went off.  Drawing aside the curtains, we were met by a sky full of rain-heavy granite grey clouds. Add to this the chilly 7°C which had accompanied us on our way to breakfast and our first thought was to stay put. Snuggling under a blanket and finishing my book sounded very tempting, especially after Veronique sent us on our way with a tray full of scrumptious homemade mini apple turnovers! 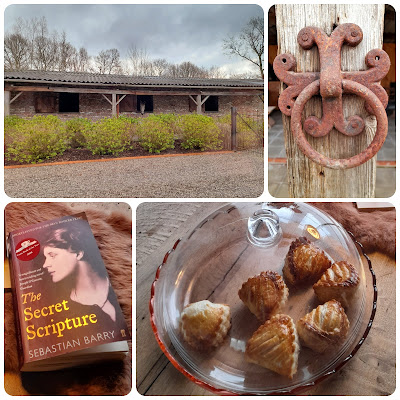 But surely that would have been a complete waste of time. After all, Bruges, with its plethora of museums, has plenty of wet weather options on offer.
With the forecasted return to Winter temperatures, I'd had the foresight to pack one of my warmest dresses, in a heavy-weight knit polyester, its pattern a mix of red and greyish white stripes and chevrons. If last time I wore it green was its accompanying colour, this time I opted for turquoise and cream. True to form, I was wearing turquoise opaques - with an additional pair of nude tights underneath - although you can only just catch the merest of glimpses of them. 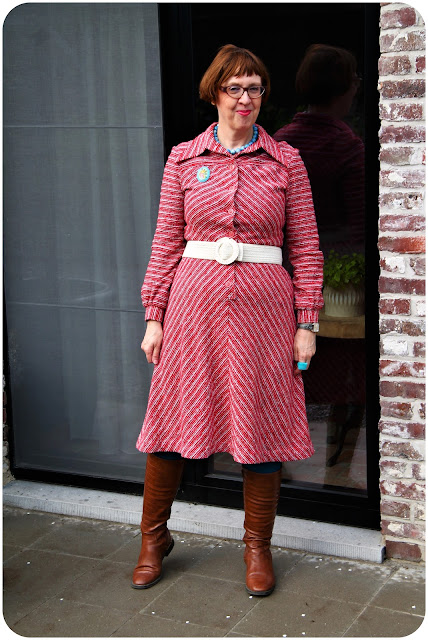 On our last visit to Bruges, in that fateful February 2020, we'd traipsed around the Onze-Lieve-Vrouwekerk (Church of Our Lady) after we'd visited its neighbour, the Gruuthuse Museum, as it was included in the ticket price. However, with our heads already filled to the brim with history and art, we we'd only had the briefest look around.
The 13th to 15th century church, with its 115.5 metre-high brick church tower - the second tallest in the world - illustrates the craftsmanship of the Bruges builders. Together with the St. Saviour's Cathedral and the Belfry, it dominates the city's skyline. 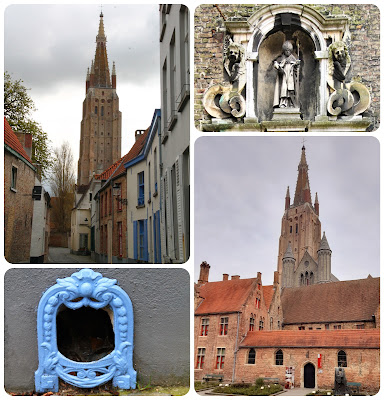 While entry to part of the church is free, you need to purchase a ticket to see its true treasures. So, that's what we did, after which we made our way through the ticket barrier, joining a handful of other tourists and one or two of the omnipresent groups of school children. 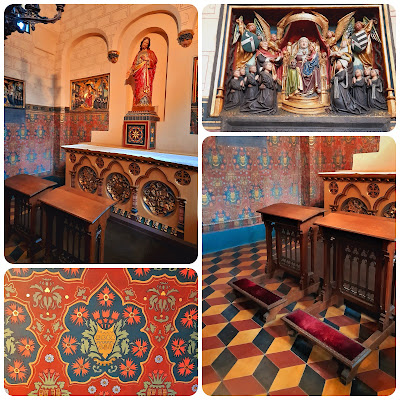 I loved the wealth of colour and detail in the De Baenst Chapel, named after a prominent Bruges family. Deceased family members are commemorated with colourful, painted memorials in half-relief, called memorial scenes. They show the deceased, together with their patron saint and children, kneeling around the enthroned. 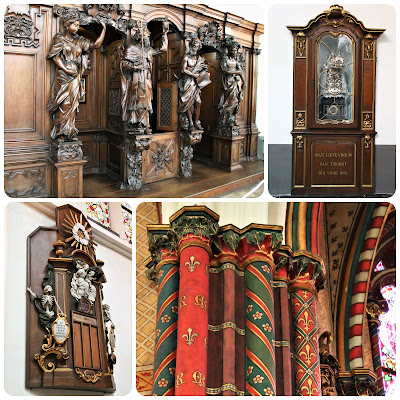 On the top left, the magnificent oak confessionals dating from 1697, considered one of the most beautiful baroque sculptures in Bruges. 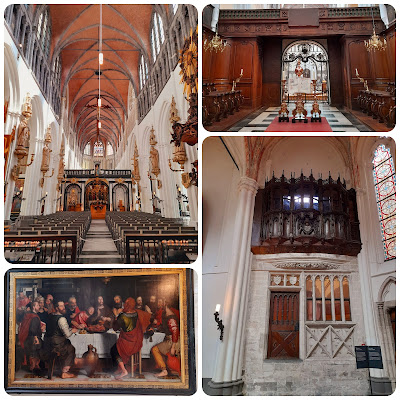 On the bottom right is the prayer chapel of the wealthy Gruuthuse family, dating from 1472.
Lodewijk of Gruuthuse (1422-1492), a powerful advisor to the Dukes of Burgundy, lived in the city palace adjacent to the church, now the Gruuthuse Museum. In the late 15th century, he had both buildings connected by a two-storey prayer chapel. From the upper chapel, the Gruuthuse family could attend mass without having to leave their palace. The lower chapel was probably intended for friends or courtiers. The priest could access the upper chapel to administer communion via a staircase.
The upper chapel is now part of the Gruuthuse Museum. You can see its interior, as well as a look through its windows into the church here.

The painting on the bottom left is the Last Supper by Pieter Pourbus, dating from 1562. 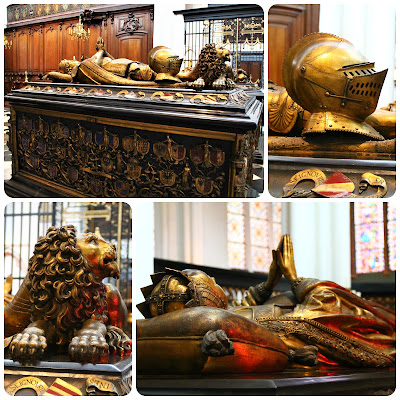 The star exhibits are the magnificent 15th and 16th century tombs of Mary of Burgundy and her father, Charles the Bold, which are situated in the choir of the church.
Duchess Mary reigned over the Low Countries in the last part of the 15th century. At the age of 25 she met her death by a fall from her horse on 27 March 1482. She loved riding, and was falconing with her husband, Maximilian of Austria, when her horse tripped, threw her, and then landed on top of her, breaking her back. She died several days later. Her husband commissioned the Gothic style tomb monument in 1490.
Charles the Bold died in 1477 in Nancy, France, during a battle. Brought back to Bruges in 1550, his remains lie next to those of his daughter. While the design of Charles the Bold’s tomb is very similar to that of his daughter, it was made seventy years later and parts of it are already in the Renaissance style 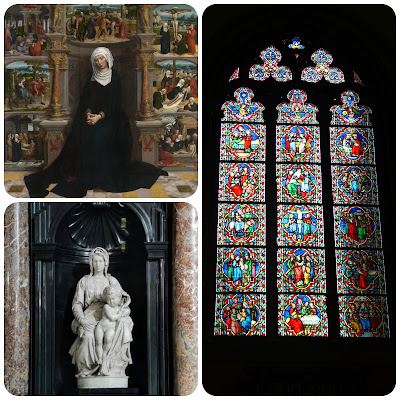 I was completely enamoured with the painting on the top left, Our Lady of the Seven Sorrows (1528-1535) by Adriaen Isenbrandt. Reflections thwarted my efforts to take a proper photo of it, so I downloaded it from the wonderful Art in Flanders website.
And then there's the famous Madonna and Child (bottom left), carved in Carrara marble in Italy by Michelangelo. It is the only one of his sculptures which left Italy during his lifetime. Alas, I wasn't able to make a proper photo of it either, so here's one I pinched from the Visit Bruges website. 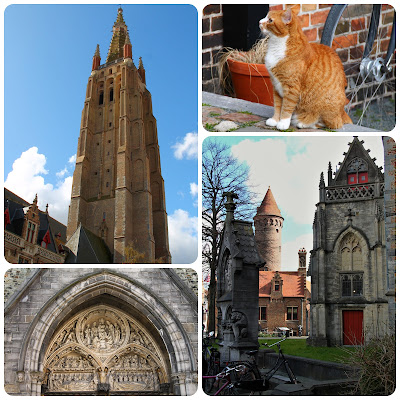 A wonderful surprise awaited us when we stepped outside. All traces of imminent precipitation had miraculously disappeared - and we hadn't even burned a candle! - leaving a bright blue sky dotted with white cotton-wool clouds.
Too early yet for lunch, we strolled around the corner to the Gruuthuse Museum's courtyard, taking in its splendid architectural details and making the acquaintance of one of the museum cats. 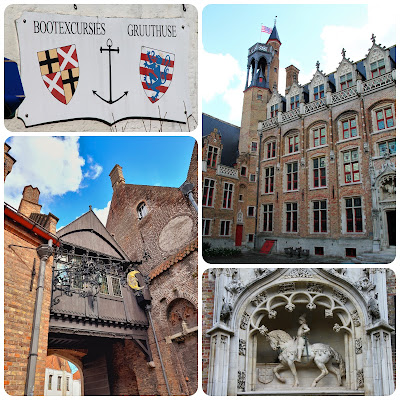 After lunch, we retraced Tuesday's steps into the direction of the Beguinage, but rather than cavort among the daffodils, we booked tickets for a tour of  Brouwerij Halve Maan (Half Moon Brewery) at their Walplein premises later that afternoon.
With time to spare, we aimlessly wandered through the busy Katelijnestraat with its tourist shops selling the ubiquitous lace, waffles and chocolates. I loved the waffle bunting decorating the fanlight above the door in one of them. On the bottom right, an assortment of neuzekes (a.k.a. cuberdons) in an array of colours.  This traditional sweet was originally only available in the dusky purple version on the left. 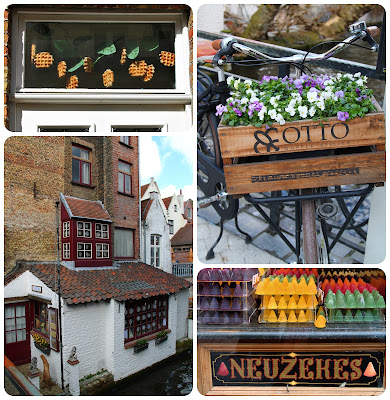 Here, a refuge from tacky tourist-land can be found in two of the 46 small groups of godshuizen (almshouses) which are scattered all over Bruges, most of them clustered around a cosy courtyard.
These charitable dwellings were built from the 14th century onwards, set up by the guilds to lodge their elderly members, or by widows or well-to-do burghers who wanted to ensure their place in heaven.

With their picturesque gardens and white-painted façades, they are true oases of quiet, tucked away at the end of an alleyway often pranged between rows of houses and shops.
The one in the above collage, Godshuis Spanoghe, has a couple of conveniently placed benches (with the cast iron griffin head finials typical for Bruges) overlooking one of the canals and offering a closer look at the back of St. John's Hospital. 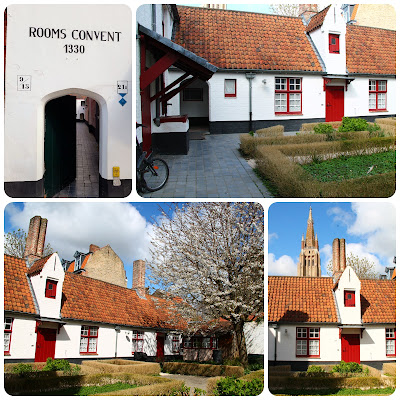 We'd managed to obtain tickets for the 3 pm brewery tour so, after having fortified ourselves with another round of cappuccinos in a café across the square, we made our way towards the brewery's shop.
As we were joining an English language tour, an international group of beer aficionados had gathered here, and we were soon joined by a passionate guide who definitely had the gift of the gab. 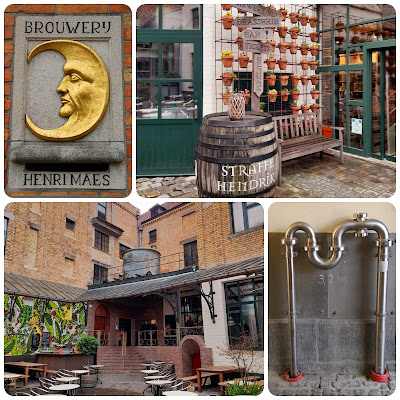 The authentic brewery, the last one remaining in the centre of Bruges, is a family business with a tradition stretching back through six generations to 1856. This is where the Bruges city beer - the Brugse Zot - is brewed: a strong-tasting, high-fermentation beer based on malt, hops and special yeast.
In 2016 a unique underground beer pipeline, some 3 km long, was laid from the brewery to the bottling plant in the suburbs. The pipeline you can see on the bottom right is just a gimmick, and isn't part of the real one. 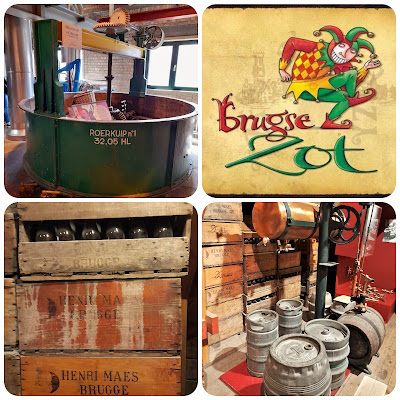 Those of you who have been following me for a while might frown at all this talk about beer, knowing that both Jos and I do not drink alcohol. There is, however, an alcohol-free version of the Brugse Zot - which by the way translates as Bruges Fool - going under the decidedly ugly name of Sportzot, and which happens to be Jos's favourite.
Back in September, we even witnessed part of the hop picking and processing at the hop farm near Poperinge where the hops used to produce Brugse Zot and Sportzot are grown. See here and here. 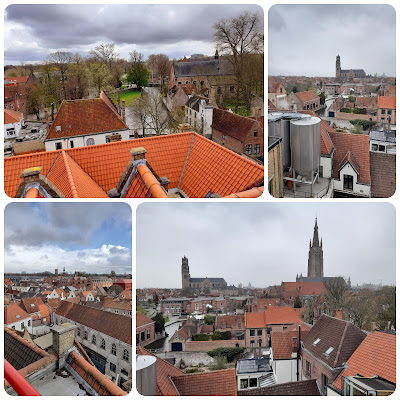 One of the highlights of our visit included a steep climb on a narrow staircase up to the brewery's roof terrace, which challenged both my claustrophobia and vertigo!
It was just our luck that clouds had gathered in the meantime and that our faces were being stung by the first of the forecasted sleet once we'd made it up there! The panorama was spectacular though, so I quickly snapped a few photos before following the rest of the gang who had already taken shelter inside. It was only later that I noticed the gate, church and part of the Beguinage courtyard in the photo on the top left. 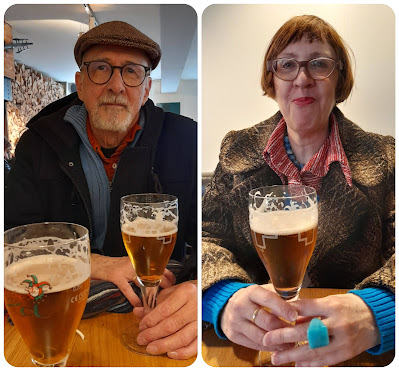 The tour ended with a free drink at the large on-site café, ours obviously being a Sportzot!
By the time we left and were walking back to the car park, the clouds had temporarily dried their eyes and, with a parting glance at the splendid St. John's Hospital picturesquely lining the canal, we once again bade Bruges goodbye. 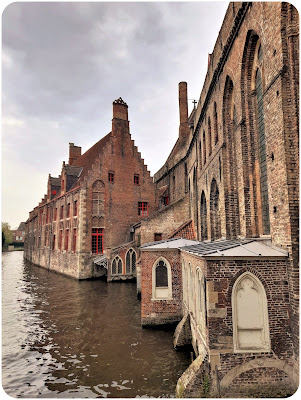 Back at the B&B, with the rain beating against our windows, we had our evening meal, consisting of rolls we'd bought in Bruges and the rest of Tuesday's tapas board, which Veronique had kindly wrapped up and put in the fridge for us. 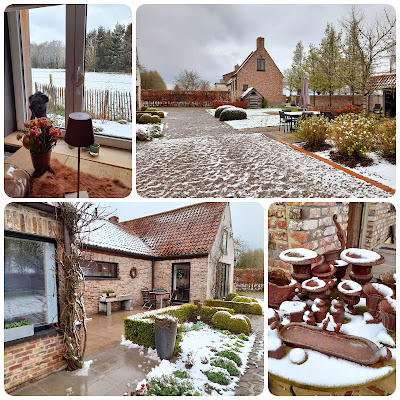 Imagine our surprise when, after our final night in the lap of luxury we woke up to a Winter Wonderland on Friday morning. The temperature had dropped to barely above freezing point and we were positively shivering when we quickly dashed across to the main building for breakfast.
By the time we'd packed our bags into the boot of our car, thaw had already set in and we made it home without any hiccups or delays. 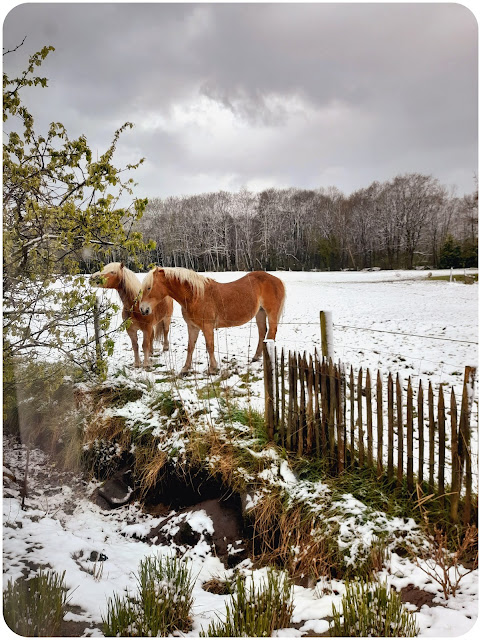 Sadly, we have come to the end of our adventures, and it will be business as usual in my next post.
But not before leaving you with the scene awaiting us when we drew our curtains that morning. Surely it couldn't have been more magical. Or perhaps it could, if they'd been unicorns instead of horses!

Posted by Polyester Princess at 19:10